Why are Oxen draft harness so simple compared to that of horses?

Scott Fike
Posts: 44
posted 3 years ago
Hello,
I have a beginner type question I was hoping someone could answer for me. I'm considering buying some Oxen for draft work. I noticed that they're harnessing system is very, very simple compared to that of Horses and Mules. My question is why can Oxen get away with such a simple harness system whereas Horses and Mules cannot?
Thank you
Burra Maluca
Mother Tree

posted 3 years ago
I think there are some pretty simple harness systems for horses and donkeys too, but it depends on exactly what work they will be doing. 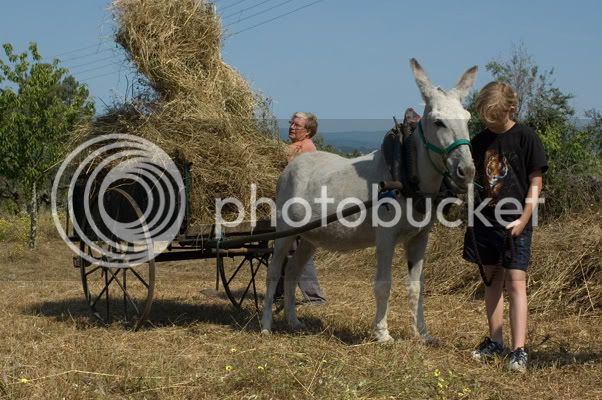 Very simple - just a padded collar with a metal hames which bolts to the shafts of the cart.  It's not fantastic for the donkey as there's usually a fair amount of weight coming down through the shafts onto her neck, and unless the handler is pretty quick at adjusting the brakes on the vehicle, there's a a danger of the whole cart crashing into her heels as there's no breeching.   But for a basic farm cart like this it seems to work.  For road work at faster paces then I think a means to shift some of the weight off the neck and onto the back would be a great improvement, and breeching a necessity.

For pulling a plow or hauling timber a simple system with just a collar, tree and chains is all that's needed. 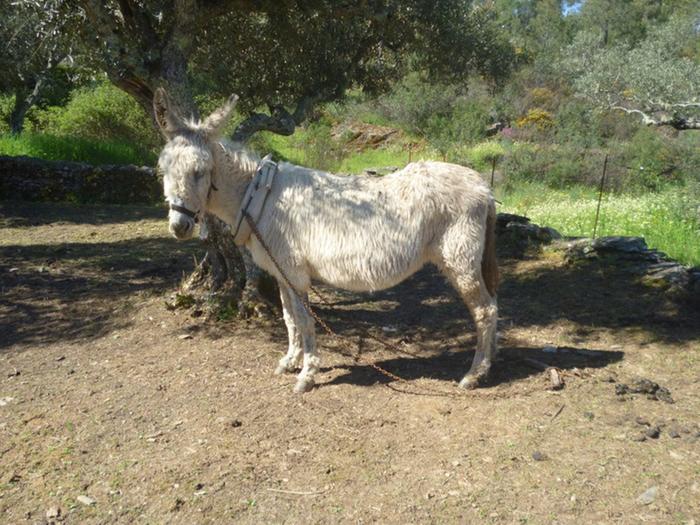 But it would be better with just a strap over the back to hold the chains in place better and make it less likely that she accidentally stepped over them.  But no need for saddles or breeching for that kind of work.

I suspect mostly it's because of the work oxen do that means they can get away with more simple harnesses.

David Livingston
pollinator
Posts: 4328
Location: Anjou ,France
243
posted 3 years ago
Have you ever seen oxen in action ? Last year I was lucky to see a team of four oxen ploughing at a festival . These were not just some cows these were a special large French breed , very rare specifically for working . They were F@@@@@@ huge and took three men to control yet were out performed by two horses and one man . Also a team of six Donkeys that seemed to do better

than the oxen .
I would ask myself why people changed to horses before I took a big step of doing this

From early reading of frontier life I gathered that horses are quick but delicate (break bones, get sick, wear out after a short time in harness) and don't have the stamina for all day work like oxen. Oxen are slow but very strong and don't ever stop.


Rufus
David Livingston
pollinator
Posts: 4328
Location: Anjou ,France
243
posted 3 years ago
I accept what you say but where are you going to get two other people to help you with these guys  when ever you need them . In the UK whole villages used to share a team of oxen to do the ploughing with man power to match , oxen died out after the enclosures when farming became a more solo effort .

David Livingston wrote: where are you going to get two other people to help you with these guys  when ever you need them . In the UK whole villages used to share a team of oxen to do the ploughing with man power to match , oxen died out after the enclosures when farming became a more solo effort .

Yeah, the UK is a bit like that - when I was trying to train small farm horses there, it was virtually impossible to find small, one-horse ploughs as the culture seemed to demand a pair of very large heavy horses as a bare minimum.  When I got to Portugal, it was pretty easy to pick up small, lightweight equipment suitable for use by one not-very-large donkey.

I've never worked with oxen, but I did stumble on these guys last week. 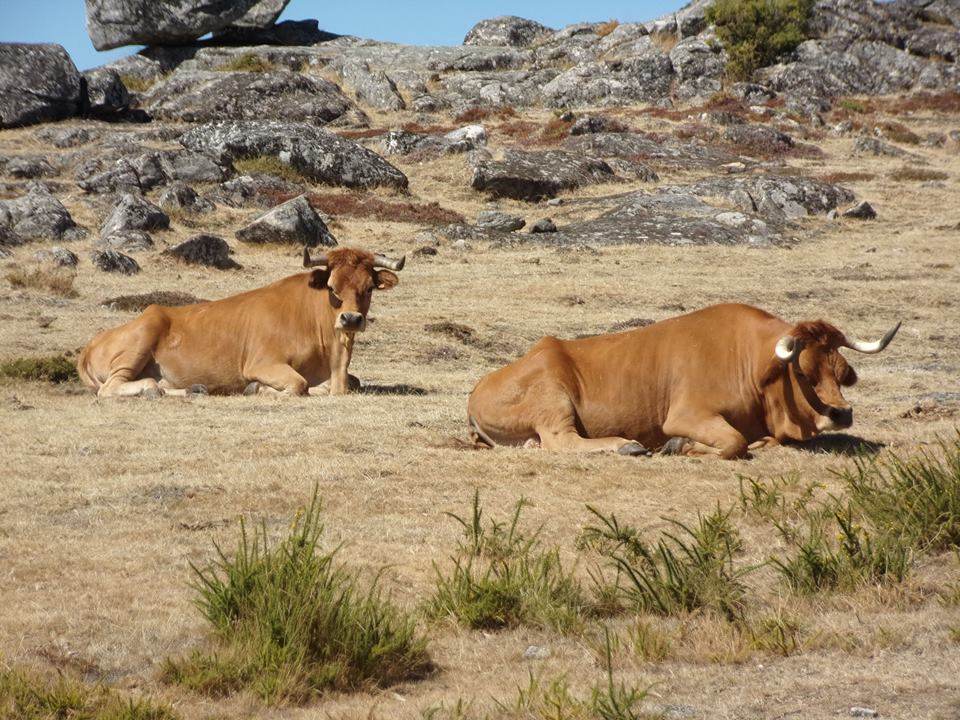 These are a landrace known as Arouquesa from Arouca in Portugal. They are triple purpose, for milk, meat and work. Which probably explains why I got away with approaching this close to them. I'm generally pretty nervous about approaching any bull, let alone a finely built one that suggests it's a dairy breed. These guys seemed pretty placid, but I decided this was close enough as the girl in background had noticed me and I didn't want to attract the attention of that boy in the front. His horns look kinda spiky and I bet he can run faster than I can!

From googling images of oxen working in Portugal, it appears as though working them in pairs is normal, and likely just with one handler.  I can certainly see the attraction of using oxen if I was raising my own just to work the land.  It would certainly save having to keep different types of animal for different purposes. 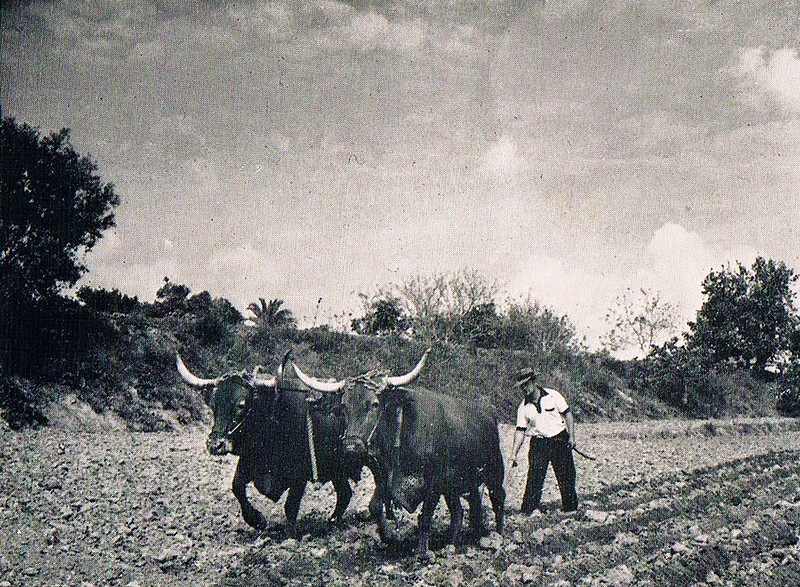 Scott Fike wrote:     ...why can Oxen get away with such a simple harness system whereas Horses and Mules cannot?
Thank you

I don't know. I think I've heard that with a harness instead of a yoke, oxen can pull more, and get less tired. Interesting question.

posted 3 years ago
The strength of an ox is in its neck, where as a draft horse it is with its back.

Around here, back in the day; a homestead family would have a team of oxen instead of draft horses for a host of reasons. About the only thing bad about them was; they were slow. Other then nostalgia for horses, I always felt a team of oxen made much more sense for a homestead.
Burra Maluca
Mother Tree

posted 3 years ago
I got a Homesteading Book, written back in 1985, but the author quoted a person from the 1700's in length about why oxen are better than horses, and even 200 years later, the argument was just as sound. I also have a book written in 1965 on logging in New England, and it told about the virtues of the ox and why it changed to the horse.

I love history, and find it fascinating how times do change. My Great Grandfather LOVED horses and hated tractors, at one time having 17 teams going at various times as he was a potato barron here. But my Grandfather he loved tractors. A sub-set of that, my father loved bulldozers, and to this day I do. I own tractors, bulldozers and skidders, but my wife says I only smile when I am on my bulldozer. I mention all this because if a homesteader has not started on anything yet, I encourage them to chose what their heart desires, they will be so much better off for it. If their heart is in love with the way oxen work, get them and never look back.
Glenn Herbert
gardener

Posts: 3058
Location: Upstate NY, zone 5
143
posted 3 years ago
I understand that horses require a more complicated harness than oxen because a simple yoke pulls on the horse's neck and chokes it. They need to have the load distributed better while oxen can get away with a simple system.