posted 3 years ago
As I was saying before, I grew quite a few beans species/cultivars this year.
I was confident that beans don't cross easily in temperate climates, and that they rarely mutate.
So I decided that as long as I am able to identify beans growing together (by the shape, size of the pod, by the color, size or shape of the bean), I'm all safe.
Bummer!
I just read that Phaseolus coccineus crosses easily thanks to insects. I made some teepees in the allotment with different coccineus cultivars, because the flowers, pods and beans don't look the same.
My bad.
I harvested the beans, and of course, being the first year, they all look like their parents. I suppose that next year, I will see the results of these unwanted crosses.

Posts: 5150
Location: Cache Valley, zone 4b, Irrigated, 9" rain in badlands.
1854
posted 3 years ago
Pollination tends to be a highly localized event. So a runner bean is most likely to be self-pollinated, then somewhat likely to be pollinated by it's closest neighbors, and then a slight chance of being pollinated by something from further away.

The best way to insure that a variety stays inbred, is to only plant one variety. But if your neighbors in nearby allotments also plant runner beans, then all bets are off.

It looks like some of the varieties you planted were genetically diverse to start with, so you can't really keep those varieties pure, because you don't have any way of knowing what "pure" is.

You had a couple of varieties with white seeds. Late in the growing season, you will be able to tell if they were pollinated by something with colored seed. By that time, the plants have already been shedding pollen into the patch. You won't be able to tell by looking at the seeds if the white varieties pollinated each other. Perhaps there are differences in the pods, and especially in the flower color. For example, I suspect that plants with white flowers produce white beans. If you have a colored flower among the white bean patch, it could be culled early in the growing season to keep it from releasing pollen into the white patch. Some of my runner beans have bi-colored flowers, or pink flowers. That might be a clue that a plant is off-type.

You can certainly grow out the seed that you saved, and reselect each year for your preferred phenotypes. If you want only white seeds, then only replant white seeds.

My preference is to grow every crop as a landrace. So I'm thrilled whenever I can identify a naturally occurring hybrid. I don't even mind if my landraces have multiple species in them. 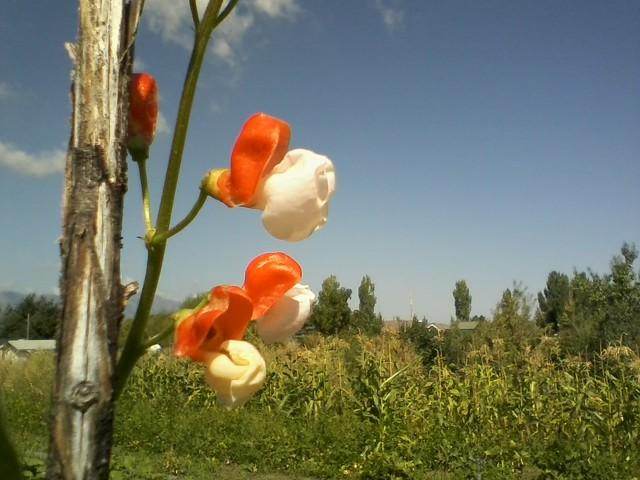 I grow my runner beans all jumbled together: 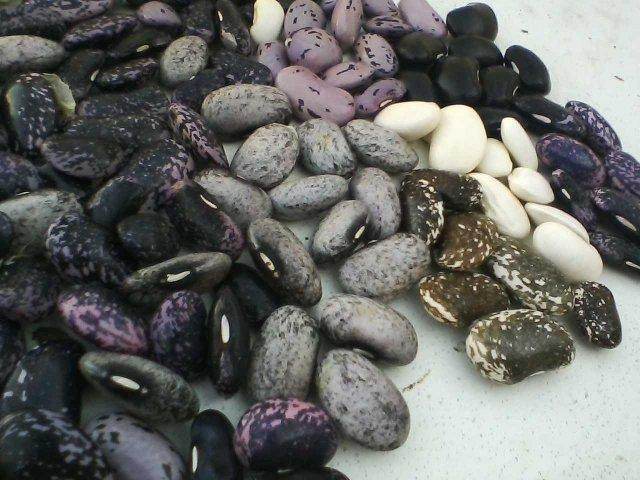 posted 3 years ago
Thank you, Joseph.
My main concern is to loose one of these, which is huge and delicious (Orteils de prêcheurs).
Thekla McDaniels
gardener

Can you recognize the Orteils de prêcheurs seed?  You could re select back pretty close to what you had, but you would do well to grow it separate from the others as Joseph suggested, if you want to keep it pure.  I would be tempted to experiment with some of the crosses you have already made, but with a very rare seed  it's probably good for someone to keep some pure.

To breed it back towards true, select the most like your lost Orteils de precheur, isolate them, select the best seed and do that a few generations.  I guess you would have to look at flavor and texture and plant habit too.

I just tried to find seed on line to buy and found nothing in  English.  There is a French site  http://www.grainesdelegumes.fr/lagumineuses-haricots-despagne-orteils-de-precheurs.html which sells them.

I found another thread here on permies where people were talking about getting the runner bean to make a tuber.  That's worth looking in to too.  Get the tuber (buy new seed or get some from a fellow grower, and encourage the tuber formation).  As long as you have the tuber it is not going to get contaminated.  I guess you would want several tubers so they can cross pollinate and all that.  As rare as they appear to be from my quick search, maybe you could be the one selling seed.

posted 3 years ago
Thanks a lot Thekla.
Last year, I was only growing Orteils de Prêcheur and some of them made some "tubers", overwintered, and came back this year. Unfortunately, the crop is inferior to the one you get with fresh sowing.
Anyway, that's a track I want to follow. I will try to dig them up, store them in the cellar, and replant them next year. This way, I can get true Orteils de Prêcheurs plant, but not seeds, which is quite good, as long as the tuber survives (I don't know how long it can live, as this is a short term perenial).
I will try to get some true seeds of the cultivars I sowed this year, so that I can restart from scratch next year. I thought of an isolation cage for each cultivar, containing a few plants.
This way, I could get true seeds each year, and at the same time have fun with this landrace...
Ray South
Posts: 69
Location: Northern Tablelands, NSW, Australia
2
posted 3 years ago
Won't you get seeds from your tuber grown plants? I've had runners in the ground for two or three years and even if the crop is diminished somewhat compared to fresh sowing I still get seed. These can be used to start again, as long as you don't grow any others.
André Troylilas
Posts: 163
Location: North of France
6
I like...

posted 3 years ago
If the winter is mild, I will get some seeds from the overwintered tubers, but I will have to protect the flowers somehow.
Thanks.
Casie Becker
gardener

posted 3 years ago
I have a question for people who have successfully overwintered runner beans. When the new vines come up are the woodier than the ones grown from seed that  year? I have a thick woody root that seems to be attached to last years vines, but now new woody shoots are popping out of the ground at that location. I need to know if that's success in the runner beans or an invading plant that I need to cull.
André Troylilas
Posts: 163
Location: North of France
6
I like...

posted 3 years ago
I don't think mine are woodier than those that I get from seeds...