Jeff Watt
Posts: 38
8
posted 5 years ago
I had a previous thread about this design but I thought it would be cleaner to start a new one with this update. 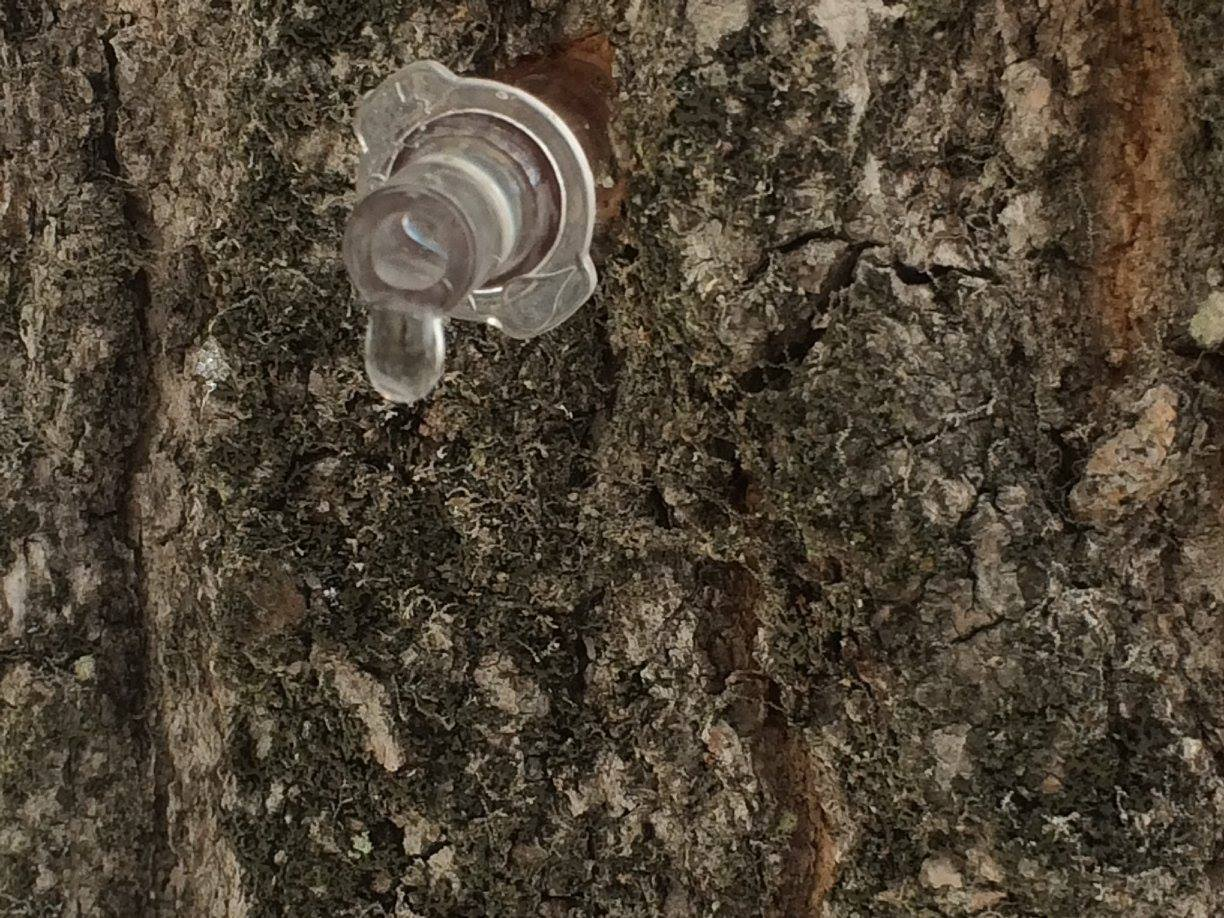 Sap is flowing early this year so I had to get an evaporator together quicker then expected.

My original plan was to build a cement block outer shell which would create some thermal mass. The plan is to use this unit as my shop heater when its not sugaring season and replace the evaporator pan with a 1/4" sheet of steel of the same dimensions to be used as a heat radiating plate. I believe the thermal mass would work better for this purpose but in terms of use as an evaporator I believe the metal shell is better as less heat is lost in bringing the unit up to temp and the idea is to go from cold sap to boil as quickly as possible. Currently this is taking longer then I would like already. I think its averaging me about an hour and a half to go from cold sap to boil. This is with the pan full of roughly 9 gallons of cold sap so there is quite a bit of liquid to bring to temp. Once boil is reached its fairly easy to maintain with gradual adding of warmed sap and minimal wood use.

Currently the stove runs on an L style rocket the stack is superinsulated in Perlite mixed with some wood ash. The stove is steel, yes I know all the drawbacks to this but I already have the stove body from my 1.0 design I figure I will use it until it inevitably burns out then rebuild the stove with a fire brick or cast refractory stove body. 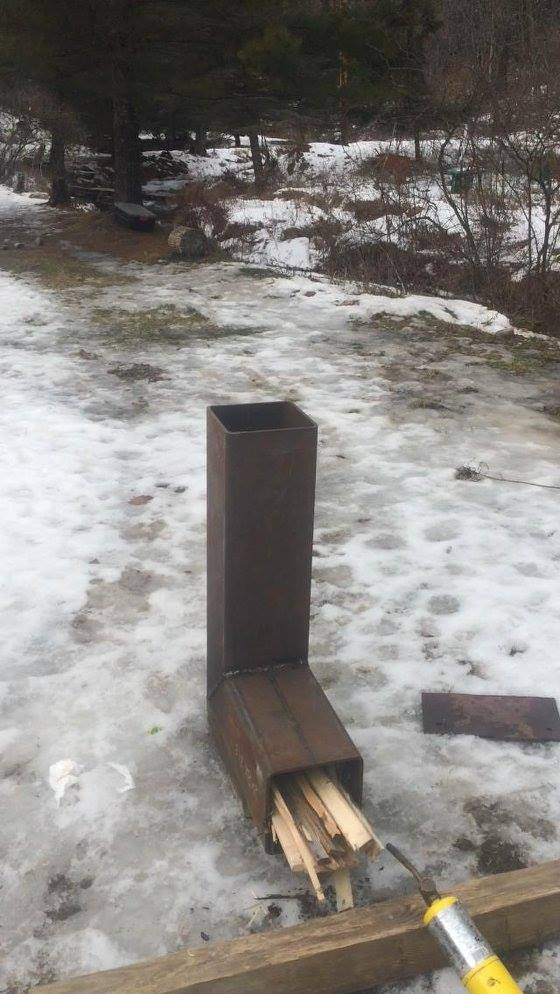 Here is the stove internals with insulation in place. The outlet pipe is seen coming in horizontally. This forces the heat which comes down at the end of the chamber to circle back before exiting the stove thus keeping more heat in the belly of the beast. My infared thermometer recently broke but exit temps at the chimney are warm but not too hot to touch so I think I am doing a good job keeping the majority of the heat from escaping prematurely 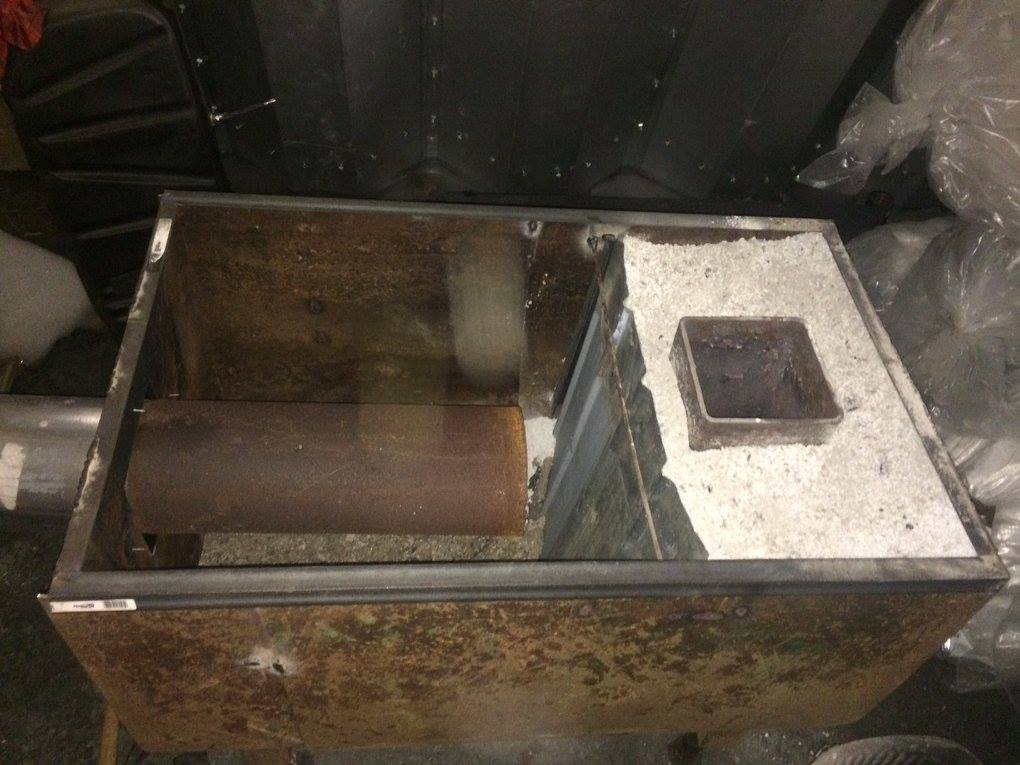 The plate the pan sits on gets set up like this. I did not get a picture of the most recent brick layout but its pretty similar to this other then adding an extra brick (plus half brick) on both sides so that the "fire chamber" as I call it is only the width of the space between the outside edges of the two holes down to the lower stove body. (on hole leads directly into the rocket stove the other just to the base). A piece of fiberglass rope gasket was also added 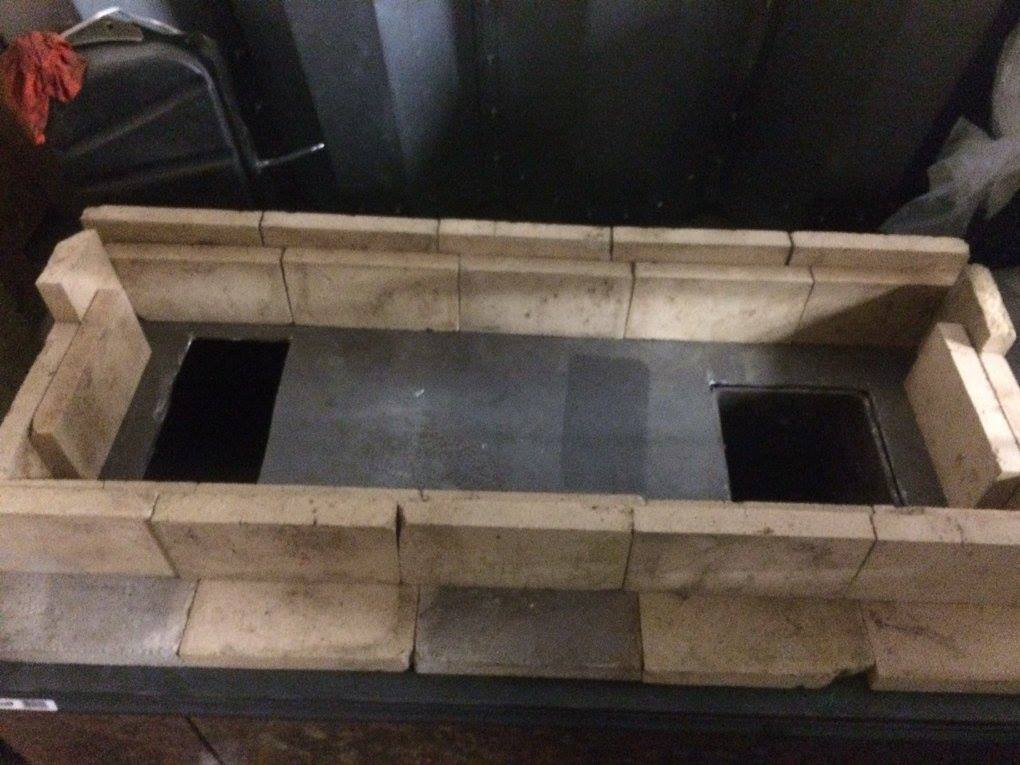 Even with all the reading I have done about CSA never decreasing I just had to try and see if I could increase boil by decreasing the area between the bottom of the pan and the bottom plate thus causing a narrower fire chamber. Without the brick floor the CSA of the fire chamber is about 61sq in. (this is an 8" system size) with the brick floor 43 sq in. This made a marginal but noticeable decrease in stove efficiency so they were again removed. I also thing the steel floor allows some of the heat lost to the lower chamber to be "regained" 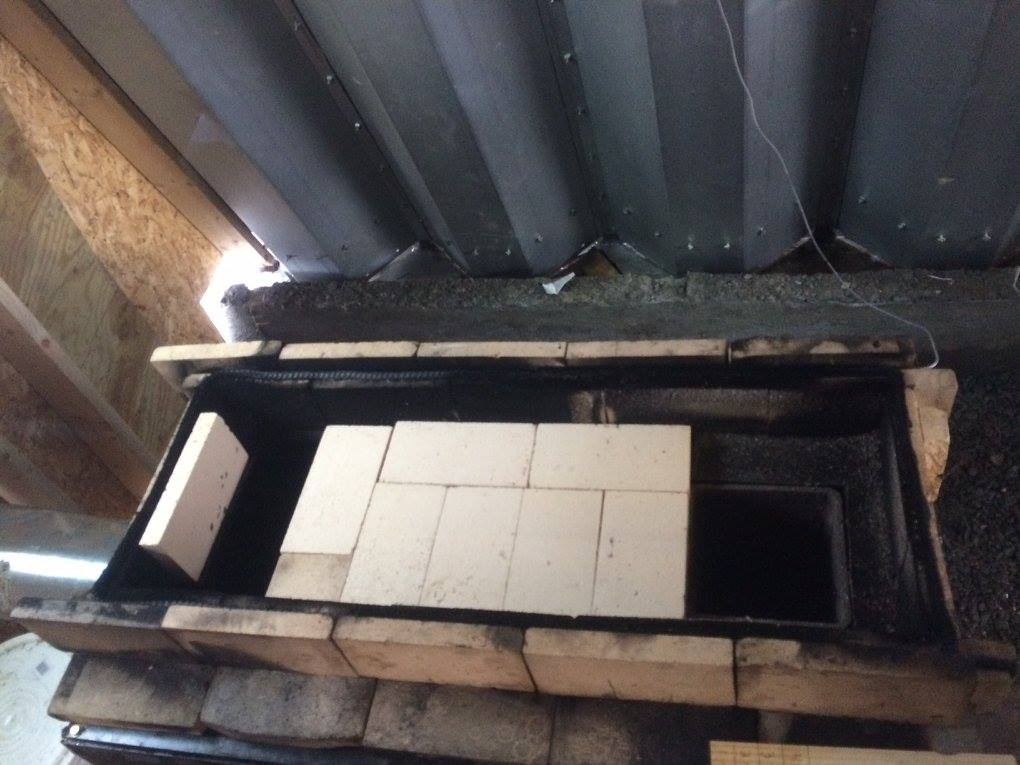 A couple pictures of the rig "in use" 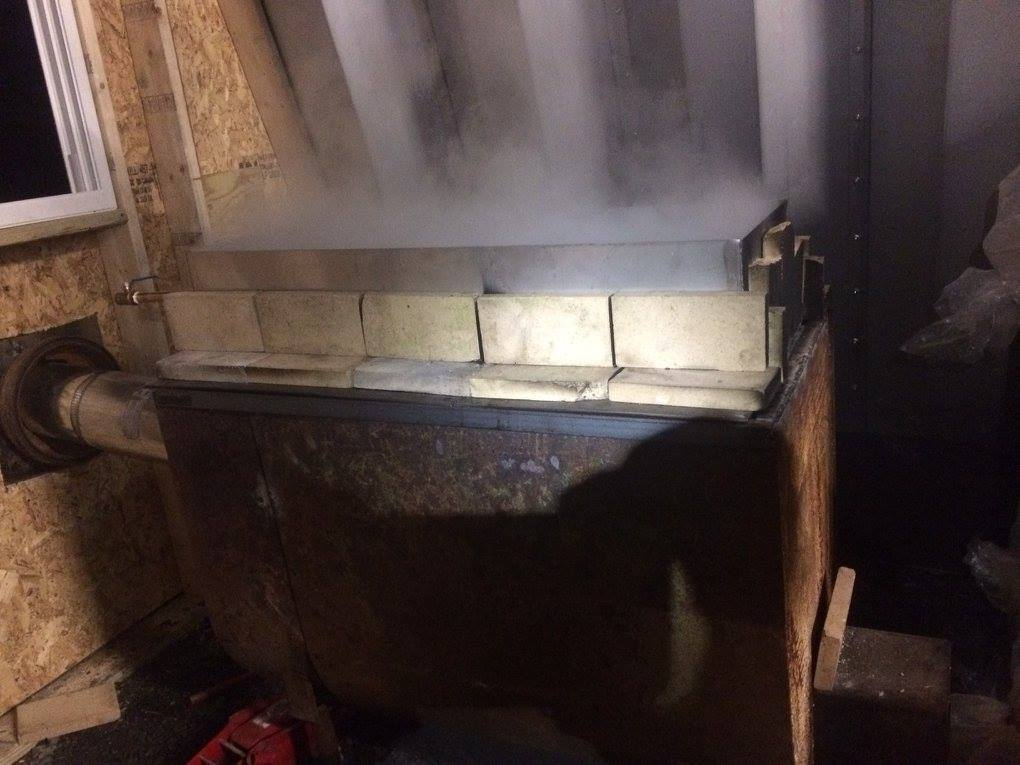 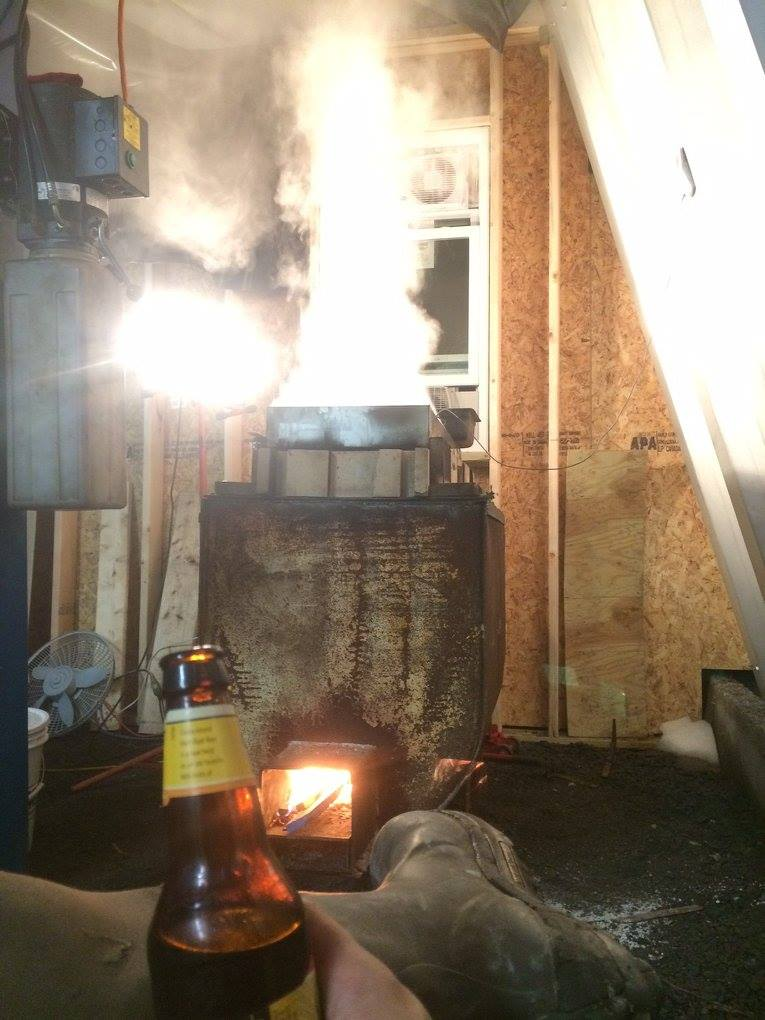 I am debating going from an L tube to a J tube heater. I could effectively do this by making one 45 degree cut on the feed leg, turning the piece cut off and welding it back on in a J configuration. The problem is I believe I will be too far outside the 1:2:3 ratio for optimal burning although I have read much conflicting information on where to measure. Going by the "book" it seems I am outside this range though. It would be pretty easy to test this by making the cut and just doing a couple quick tack welds to test. If it does not work I could cut the welds and flip it back to the original way. The main difference would be fuel currently burns at the back of the leg right below the stove chimney stack. There is a shelf in the bottom of this leg to allow air to travel directly to the coal bed no matter how tightly you pack the fuel. If I flip it to a J style then the flame and coal bed is all the way on the outside of the stove in an uninsulated area. Its possible I could build some sort of outer box around this and fill with perilte. I would appreciate thoughts on this or other improvements I might be able to make within the confines of the system as it stands. 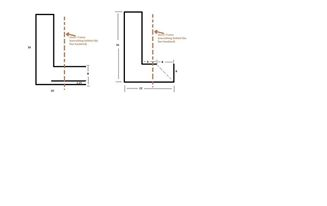 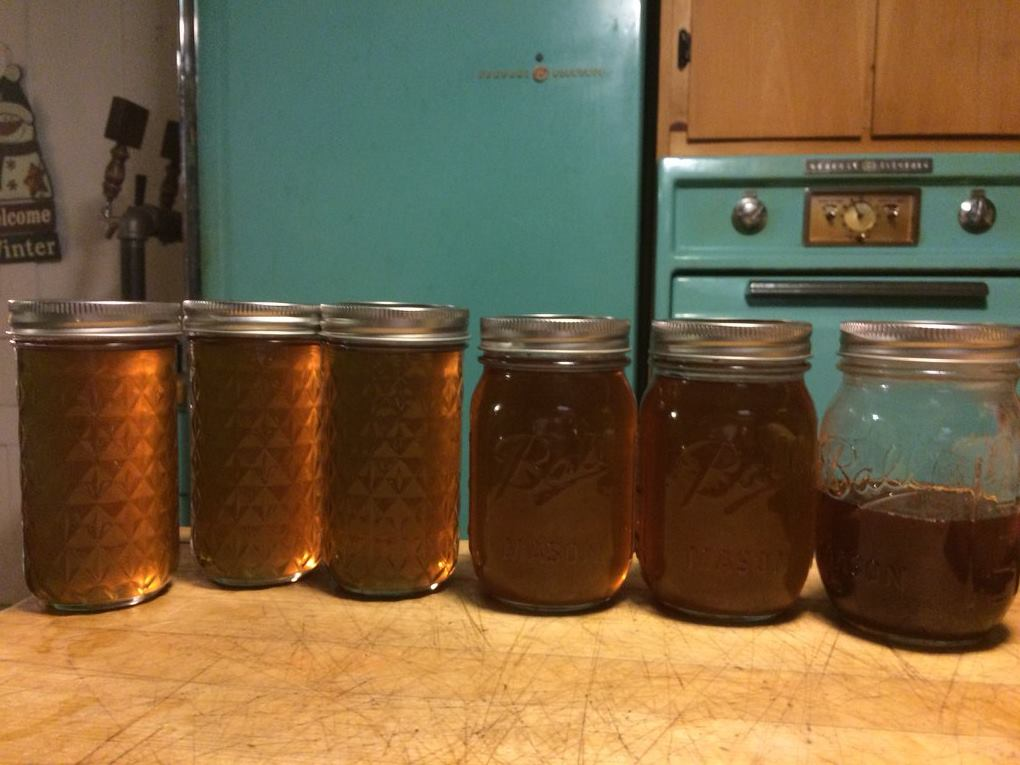 posted 5 years ago
I am watching this topic with interest as I am looking for new and effective means of boiling my birch sap this year.  Thanks for sharing the information.

No man is an island.

Posts: 3454
Location: Southern alps, on the French side of the french /italian border 5000ft elevation
180
posted 5 years ago
On this pic

i would shorten the exhaust tube, as i find it a bit too close to the perlite retaining wall. There's already a lot of friction ahead of this point.

The other thing, how is your chimney outside?

Jeff Watt
Posts: 38
8
posted 5 years ago
The chimney outside is a single wall galvanized chimney goes horizontal about 5' past the building and then vertical from there. I had a 6' vertical on it but it seems to draft just as well with a 3' and I can watch the smoke out the window easier to keep an eye on how clean the burn is. Tends to only really smoke when its first filled with a new load of fresh wood. When a load is burning well say from 1/3 in till end of the sticks there is little to no smoke. I could try shortening that tube though thanks for the tip. I will see what happens.