Larry Bock
Posts: 197
10
posted 3 years ago
I have an odd question.i love ducks, from the way they quack to the way they taste with orange or cheerie marmalade. Duck eggs as well. While I know every living creature needs water and food to live. Do ducks actually need a small pond or pool to make them " happy" ducks.  If there were say a dozen. Would a children's pool ( kiddie pool) would that make them happy and productive?   ....larry
r ranson
master steward & author

posted 3 years ago
It depends a lot on the type of Duck.  If they are muscovies, then a small puddle like a kiddie pool would be plenty.  Other kinds of ducks need more water, like two pools, others need A LOT more water to be healthy, happy and therefore, delicious.

Hester Winterbourne
Posts: 407
Location: West Midlands UK (zone 8b) Rainfall 26"
89
posted 3 years ago
If you give them a small pool to play and bathe in, be prepared for them to make it very messy!  I think if you could raise it up so they can't drag mud into it you could maybe keep it clean longer.  Otherwise you face having to change the water very frequently, and wherever you tip it is going to get waterlogged and muddy too - I'm not saying it can't be done, but requires planning!
Marissa Creston
Posts: 51
Location: Flathead, Montana
4
posted 3 years ago
What makes a duck "happy"? Ducks love to eat. They particularly love to drill for worms in the mud. For that, a pond isn't necessary; a puddle will do. I doubt my ducks are ever happier than during those few short weeks during the spring melt when every depression in the hayfield becomes shallowly flooded, the worms are fat and abundant, and the grass returns fresh and green. Ducks (or at least drakes) also love to breed. For that, they absolutely need water; they are a bit too awkward to accomplish that task on land. So, if you are hoping for ducklings, you will need a small pool, deep enough for them to swim in, as a minimum. One pool for each drake should suffice. That aside, all they really need is enough water to drink and to preen. Of course, for that, even a bucket will do.
Maureen Atsali
pollinator
Posts: 453
Location: Western Kenya
62
posted 3 years ago
Muscovy ducks are very different than all other mallard breeds. They are terrestrial.  They like water, but they don't need it as much as other breeds.  In fact, Muscovy ducklings need to be kept away from water for the first few weeks, or they will drown.  My ducks get a basin of water every morning.  They can hop in, roll around, clean their noses, make it filthy.  At the end of the day I water my trees with the soiled water.  They also don't drill in the soil like mallard breeds, so don't make big muddy messes everywhere.  They do not need water to breed.  And they don't quack.  They whisper and hiss and gesture.  I love my ducks, they are my favorite by far!

Larry Bock
Posts: 197
10
posted 3 years ago
Is there a specific breed of duck I should be looking for a climate such as central Maine? typically ducks migrate (I think?) Would I have to build a separate coop? for them if I had chickens?..Larry
Marissa Creston
Posts: 51
Location: Flathead, Montana
4
posted 3 years ago
Any domestic duck of mallard descent will do perfectly well in a cold climate. Yes, their wild cousins do migrate south for the winter, but they are just following the food not fleeing the cold. You will need to provide them with some shelter, at the very least a place to get out of the wind, but they are easy keepers. Mine do just fine in an insulated but unheated coop. And it gets plenty cold here! Sometimes down to -40F. The ducks, of course, don't come out of the coop much once it gets well below zero. But give it a few degrees or a bit of sunshine and they will be back out bathing in their water buckets! And yes, ducks and chickens can be kept in the same coop. This works best if they are raised together. Otherwise, you will need to introduce the ducks into the flock gradually just like you would with any new bird.
Nicole Alderman
master steward

posted 3 years ago
I have a big pond for my ducks...and the 10 of them made it such a poopy mess that they were getting dirty and sick from it....and the bobcat kept hunting them there. The pond is great when it's raining and a stream fills it and the extra water flows down stream. But, in the summer, the water level gets so low and the pond so gross that it actually smells of poop. So, even a pond has a downside if you can't drain and refill it.

At another time, I had a big cement pond for them to swim in. It had a drain at the bottom, so I could water the garden with the water. But the drain always got clogged and it took SO MUCH time--and water--to drain and refill it. We tried to filter and airate it, but it wasn't working out.

Here's a picture of the big cement pond. It's four feet deep at it's deepest: 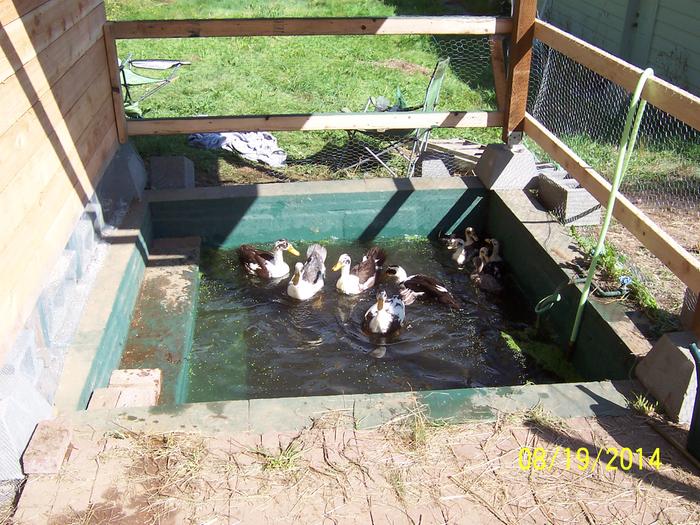 So, I switched back to just using 1.5x2.5 foot, 6 inch trays. They're random plastic "drawers" that my husband found in the recycling at work. A big oil pan would also work. These are big enough that the ducks can take a bath. and so the water gets pretty muddy/poopy pretty fast. So, I tip over this water at least once/day. Sometimes I rotate where the tray of water is, usually by a fruit tree, so I can just dump out the water and fertilize/water a tree at the same time. On hot days like today, I leave a hose trickling cold water into their biggest tray to keep it cool and full for them.

Here's one of their old trays. This one broke, and their new ones are slightly larger and deeper, but it gives you a general idea: 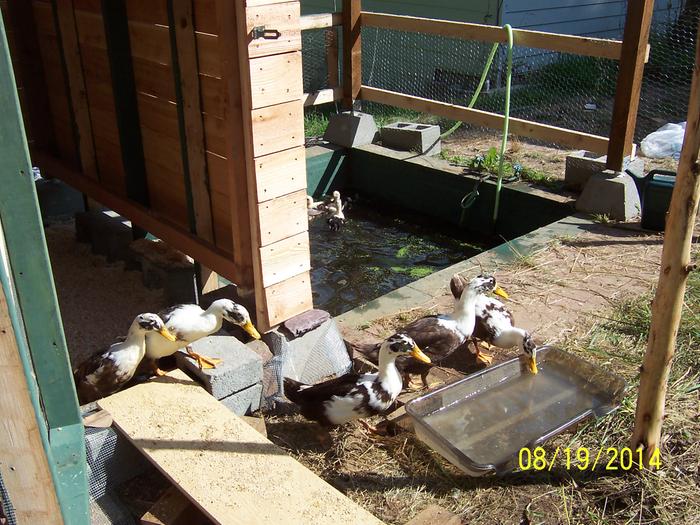 I also use a pail for them to get drinks out of, which they have a harder getting dirty. It's deep enough that they can stick their heads in, and tall enough that they can't get in it, while also not being so narrow that they tip it over. I also change this water once/day. One word of caution, DO NOT use a pail where you have ducklings...even big ducklings. I have had at least two ducklings get in and drown during the night. I also had a large duck who had wet feather (from when life was too crazy and I wasn't changing their water every day), and she somehow got in it and then died of hypothermia during the night.

Also, different ducks make different amounts of messes in their ponds. My first flock of ducks really didn't mess up their water much...then I got three ducks from another lady's farm, and these ducks all LOVED to get mud in their bills and rinse it in their pond/tray. And, of course, they taught all my other ducks this. My water went from getting dirty once every 2 days, to being mud in just one day.

John Natoli
Posts: 33
2
posted 3 years ago
I have three ducklings and I couldn't imagine keeping them long term with just a kiddie pool. They make sure a mess out of the water simply by defecating that it has to be dumped daily and then the whole area is muddy and covered in duck poo. I've recently migrated them over to my pond where they are much better off.

posted 3 years ago
Going to see if I can add some pictures of my pond, especially my pond now that the rains are gone and they've been using it for over a year. I usually have between 8 and 12 ducks.

Edited to add (sing my baby passed out and I can finally type again!) So, yeah, I probably won't be letting our ducks visit our pond again until it fills back up with water enough that it does a "water change" with some of this poopy water going down stream. That'll probably be in September or October. I'm thinking I have a pretty big pond for just 8-12 ducks, and even just that many over the course of about 18 months has made this pond dangerous to their health. They were coming out of it brown, and their egg production had gone way down. With 8 layers, they were only making 2 egg/day, and there were a lot of shell-less eggs. I also lost 2 ducks to aspergillus. Today, they laid 5 eggs and they all seem much healthier. So, I guess my advice is, if you do use a natural pond, really keep an eye on the quality of water, because even a large pond can go nasty.

Also, whatever watering system you use for your ducks, keep an eye out for wet feather. Wet feather is caused by the duck not being able to keep themselves clean, and thier feathers cease to repel water. This can cause hypothermia when they're in the water, and they also get sick. Here's more info about wet feather https://poultrykeeper.com/external-problems/wet-feather/. I lost one duck to it, but was able to save two, and have prevented it from reoccurring since I changed how I "water" my ducks.
104_2295.JPG
104_3775.JPG
104_3774.JPG
102_0656.JPG

posted 3 years ago
Lets see if I can find a picture of my ducks with wet feather...  Here we go. In the first picture, you can see Remington and some other ducks with various degrees of wetfeather. His wet feather got so bad that he was sick/lethargic and almost had worn through feathers on the skin on his breast. Another duck was even worse, having an open sore on her breast. We'd almost got her healed back up when she somehow managed to get in our water pail and died of hypothermia. We thankfully managed to bring Remington back from the brink with warm water baths, lots of clean water and bedding, and lots of food available right next to him so that he could recover.

Whatever way you use to provide water to your ducks, really keep an eye out for ragged feathers that just always seem wet. A duck should not look wet. Water should repel off of them almost all of the time. If it's not, change your watering system for your ducks lest you lose ducks like I did.
Wet-Feather-Ducks.jpg
Preventing-Wet-Feather-Ducks.jpg