posted 3 years ago
I think we are all done here.

If television production companies want to find homesteaders for their reality tv shows, they either have to pay me $500 to let their stuff appear here, or they have to find someplace else to reach people.

Further, if a television production company person is having trouble using this site then I think the site is configured perfectly. 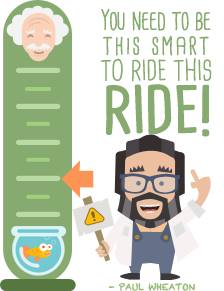 Just to be clear:  I will not provide support to a television production company person, or allow theirs posts to appear on this site until after I have received $500 via paypal at paul at richsoil.com.

To all staff:  if a television production company person contacts you in any way, please direct them to this thread.  Please lock those accounts and remove those posts.

posted 1 year ago
Just wondering if there is a thread detailing the events that led up to this policy. Not that I disagree in any way, only that I would love to know the story behind it. I hope it didn't cost you anything, Paul, though even if it was only your time, it would be an egregious waste.

Chris Repp
Posts: 4
posted 11 months ago
Hi Paul, thanks for making this info very clear.  Do you have any examples of successful castings from these paid posts?  I just need something to help sell my bosses on the fee

.  Thanks, really appreciate the community you have built as I will be moving off grid once I pay off my student loans!
paul wheaton
master steward

Chris Repp wrote:Hi Paul, thanks for making this info very clear.  Do you have any examples of successful castings from these paid posts?

paul wheaton wrote:
If television production companies want to find homesteaders for their reality tv shows, they either have to pay me $500 to let their stuff appear here, or they have to find someplace else to reach people.

Paul, I know you didn't ask anybody for their opinions, but I gotta say this strikes me as a very charitable price structure that's awesomely generous to the production companies.  I got curious about reality TV production budgets and found this article that says production budgets were in the the $100,000-$500,000 per episode range all the way back in 2010.  According to the Writers Guild Of America (TV writers union) the average profit on a reality TV show is 40% and some range up to 60%.  WGA suggests that episode costs ranged in 2013 between  $225,000 to $425,000 for reality shows on cable (into millions on broadcast TV).   A few recent articles suggest that profits are down a bit in 2018-2019 due to intense competition but that episode costs are way up from the old numbers I just quoted.  Nobody throws that kinda money around to make a show without spending considerable coin on casting!

IMO there is absolutely no reason why a production company that is ready, willing, and able to spend what must be tens of thousands of dollars on casting should expect to get free access to a community that they deem likely to be a rich source of potential cast members.  When it's professional actors being cast for scripted television and movies, everybody in the casting process, down to the talent agencies and individual agents who represent actors, gets paid somehow.  Nobody in Hollywood expects that they could go on some internet forum for professional actors and just recruit them for free!

Given that a reality show might hope to recruit for multiple episodes if they had access here, it seems to me that a fee in the thousands to get casting access to this community would not be out of proportion.

posted 10 months ago
I suspect Paul set the dollar amount high with the hope that no one would pay it.  I don't know the history, but I understand it is long and painful.  I suspect there are many lovely people out there in TV land and you're being punished by the sins of the people who came before (which is also a good reminder that if enough people in your industry act like assholes, you'll very quickly run out of people who will want to work with you, so it might be time to think about that as Paul isn't the only one I've heard complain about this).

If you get past the gate and Paul approves you interacting with this website, you'll probably encounter some serious culture shock and put your foot in it right away!  I suggest before you post, laying down some serious cash to hire one of the staff members here to guide you.  (note, this will be significantly more expensive than Paul's entry fee.)   There are a few of us who hire ourselves out as permies guides.  Starting at $100 per hour and goes up to my rate which is "if you have to ask, you can't afford it".  (note: if you start messing the staff person about, that will be breaking our publishing standards and most likely lead to you loosing your permies privileges - no refund for bad behaviour.).

Permies provides a highly targeted and active audience.  Our mailing lists are significant.  Most importantly, we don't bombard our readers with adverts.  When we do have something to promote, people know it's going to be relevant and good.

Most of our readers are a bit damaged from the bombardment one finds elsewhere on the internet.  Approach them with regular methods is a quick way to turn the community against your project.

Post here (don't PM me) if you have any questions about hiring a permies staff member to help you find the best way to advertise your stuff (but only after Paul approves your entry).

The greenhouse of my dreams! ~ support the kickstarter and help me earn a bit of kickback cash!