posted 4 years ago
What a lovely way to start my Sunday! Thanks Burra.

I don't know that I've ever seen that many awards at the start of a film or short.

The end says it was inspired by something - what was that?

posted 4 years ago
It's in Spanish, but I believe it says


Here's a link about the site in Vale de Côa, and one of the photos from that site.

The local Garrano ponies are believe to be the direct descendants of the horses depicted there. Here's a link - Garrano ponies.  And a photo. 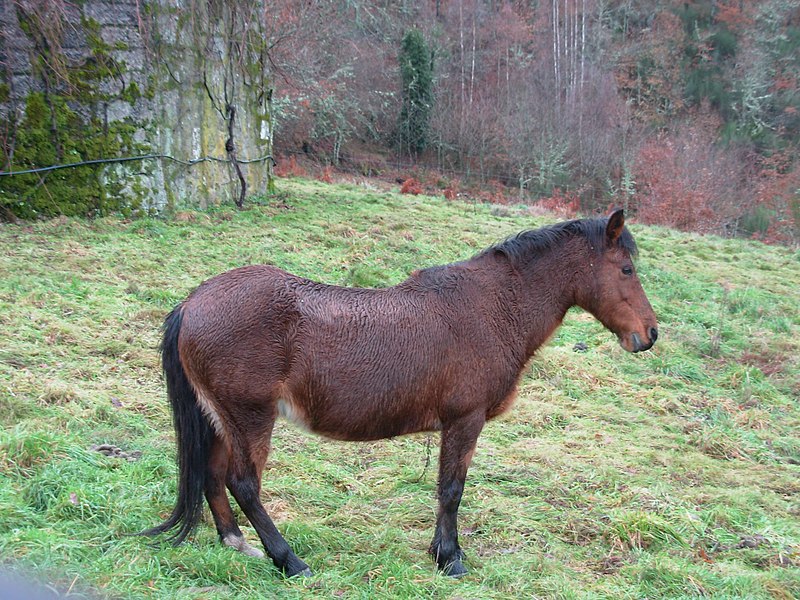 And according to this site, they are very similar in origin to the Exmoor and Welsh ponies.

And while the welsh breeds are fairly diverse, my friend who owns Gwarcoed Stud breeds some with a very similar 'stamp'

posted 4 years ago
These pictures and this history are amazing! I'll have to share with some horse lovers I know!

posted 4 years ago
I used to have one of the Gwarcoed Welsh Cobs, Josey Wales.  I bought him as a yearling and trained him for farmwork, but he was sold before we emigrated.  He became my son's pony after old Jenny died and I offered him a choice of either Joe or Mari, my riding Arab.

"Because she was so old." I told him.

Boys can be so much more rational with horses than girls usually are...

I don't have any photos of Joe when he was with me, but here's one of him doing slightly fancier stuff than he used to with me!

I do have one of his playmate, Toby, at aged three having his first go in the hayrake.

It's quite interesting comparing the way they are moving in those two photos - Joe, who was fully trained by then, is confident, eyes and ears looking forward, neck arched, reaching forward with his feet. Toby, who was still very much a novice and not at all sure of the heavy, clunky, and incredibly noisy contraption he was dragging around, has head lifted up with no arch at all in his neck, eyes and ears focused on that iron monster behind him, a lot of tension showing in his upper lip, tail clamped down and making rather short, stifled steps.

I have one somewhere of his mother in the farm cart collecting wood.  I'll see if I can dig it out.

posted 4 years ago
I really enjoyed Rupestre. Thanks Burra!

posted 4 years ago
Every time I watch Rupestre, I'm reminded of this scene from the Ice Age movie.