steve pailet II
Posts: 29
posted 2 years ago
It was suggested that I post this thought to the group. After watching some of the DVD and then the video on starting the RMH  Perhaps just out of the box thinking.  I do not have a RMH at this point, but have been watching the DVD series.  For various reasons they suggest that one keep most of the chimney inside of the space  that the RMH is in,  I may have not gotten this totally correct but thought it is because of the heat gradient and trying to push again cold air in the chimney if it is exterior to the building envelop.

What I was thinking using either votive type candles or an oil lamp put them under the part that sticks out (hat bill)  and let this heat the pipe causing a draw to happen thru the burn tunnel.   Kind of nice having light in the wee hours and helping to induce a draft to start the RMH.

Thoughts??
Duane Hylton
Posts: 53
Location: North Alabama
4
posted 2 years ago
Many of the systems built have a "startup bypass" for just this purpose. The hot gases bypass the main heating element until the stack gets hot enough to draw well. Then the bypass is slowly closed off and the heat in the flue retains the draw until the flow through the heating element catches up.
steve pailet II
Posts: 29
posted 2 years ago
have not seen any pictures of the by pass that you mention.. so not sure how one would go about heating that
thomas rubino
gardener

posted 2 years ago
Steve; We don't know your location...if you are down south then no need to worry about an uninsulated chimney. However if you are up north an insulated chimney is the only way to go. If the cost of metalbestos pipe (insulated) is scaring you then consider that you can insulate a chimney yourself with two sizes of stove pipe and plain old fiberglass insulation stuffed in between. In cold country if your chimney is not insulated not only will it resist starting the draw it will also steal your mass heat away all night long!
Yes, a candle/ lantern/ burning paper  will start the draw on any chimney, its been done for many years before RMH were invented.

Matthew Goheen
Posts: 70
4
posted 2 years ago
Rock wool mineral wool is also available most places and will stand up to higher temps than fiberglass, for when that bypass is open.

One of the issues we face is that mass heaters are designed to extract MUCH more heat from the exhaust, before sending it up the chimney, and the pressure differentials created are so small, that the stack effect of the chimney is not there when starting from a cold system.

Your idea certainly would work, though I think it could even be moved down into the insulated living space with heating of a single walled pipe section.

Making the outer "shroud" a bell by closing off the top, and having some rockwool insulation around the outside of it, would concentrate the candle's heat to warming the pipe and air inside...

I'll draw up my version/interpretation of your idea with some specific optimizations that come to mind.

Somehow think you are thinking about climbing up on the roof and trying to induce a draft.. NOPE  100% inside

have not seen any pictures of the by pass that you mention.. so not sure how one would go about heating that

Keep watching the DVD. At some point in time you will see Ernie 'playing' the bypass blues.

From my own experience, I once made my own bypass out of coffee cans and some coat hanger wire and a few small magnets. Worked very well until I removed the pipe and switched over to a bell for my heat extraction.

Also, like Thomas mentioned, my version of DIY insulated chimney pipe was using 2 layers of bubble wrap with foil on either side....just what I had at the time. Without it though, the biggest problem is condensation. At times I have seen water almost streaming down the pipe and creating these large icicles. 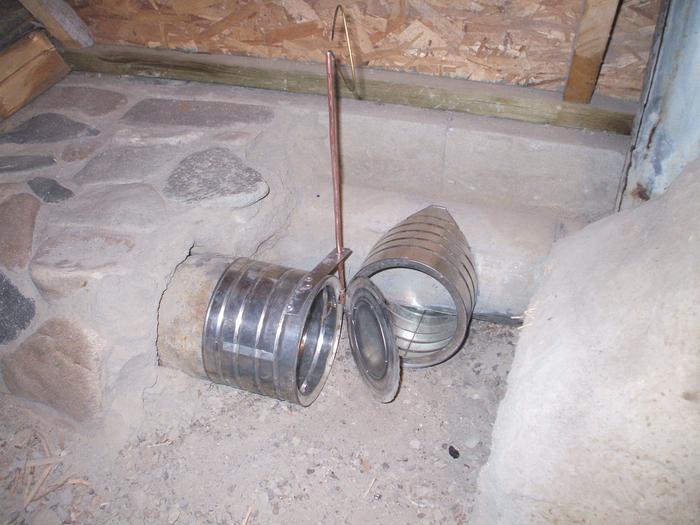 steve pailet II
Posts: 29
posted 2 years ago
What is this ByPass  you keep talking about  I am confused. there is no damper there is only a continuous pipe from the j tube to the cap on the chimney

That would be to allow more of the heat from one votive candle to go to the gasses you want to warm inside the chimney and not into that room temperature room... A way to make your idea more effective with the same hear input. It would be able to work well on a vertical chimney section as well.   I'll have to make a drawing of what I mean.


This is my point. cold system.. nothing to induce a pressure differential  No stack effect.. HENCE if you preheat the pipe you do induce a stack effect.

No disagreement, my statement there was rewording the obvious, in stating why these systems need a bypass or other means to create stack effect for startups, at the tail end of the system.


Somehow think you are thinking about climbing up on the roof and trying to induce a draft.. NOPE  100% inside

Your description made me think you were talking about placing it up in the transition "witches cap" at the roof.  I think the word you used for the place you want to put it is not familiar to me so I got the wrong image.

steve pailet II wrote:What is this ByPass  you keep talking about  I am confused. there is no damper there is only a continuous pipe from the j tube to the cap on the chimney

The bypass is a three way valve or parallel exhaust path, that connects the chimney stack to an earlier point in the system to heat the chimney during startup.

Could be a connection off the barrel, above the manifold at the bottom, with a gate valve that allows passage of hot gasses directly to the chimney when open.  When closed the gasses would be forced down to the normal route through the manifold and heat extraction system.

posted 2 years ago
Ooops... one thing the picture doesn't show (because its in the construction stage) is to imagine there is another coffee can to the right side that hooks up to the manifold.... this then completes the T for the bypass.
A small arch of wire is then formed over the flapper and then the whole thing encased in cob.

In the photo the stove is to the right and the bench is to the left. The pipe closest to the front comes from the stove and the pipe at the back goes to the chimney