I know that for a solar oven you would need to use black cookware for higher efficiency.
My question is, if a pot is coated black on the outside, would be less or more effective if the inside is reflecting metal?
David Livingston
pollinator
Posts: 4328
Location: Anjou ,France
245
posted 3 years ago
I actually don't think the inside will make that much difference . It's about the container getting hot

posted 3 years ago
You know how, when you wrap a potato or anything else in foil for cooking, you put the shiny side in? That's because even in that case, the shiny side will reflect heat better than the matte side.

I think that, because incremental improvement matters sometimes in things like solar ovens, the shiny inside might allow less heat to escape once it makes it inside. I think that, for instance, if the outside of the pot was a stippled or rough cast iron, with a huge surface area due to porosity and bumps, it would absorb solar radiation better than a cast iron pot that was smooth.

The question of how much and if it's worth any expense to do is another matter, and probably has more to do with the environment in which you're using it.

Yes, I thought it would be either beneficial or make no difference.
I was thinking about a way to blackened my stainless cookware to work better for a solar oven. really hard to find some diy glazing that won't release toxins...
Then I Thought about a simple solution : blackening the outside of the pots with wood fire. very matt, more surface area and it's harden after a few times. might be not most ecstatic to everyone but I think it'll work.

David Livingston
pollinator
Posts: 4328
Location: Anjou ,France
245
posted 3 years ago
My thought processes were quite different on this . Whilst the pan will undoubtedly be heated by radiation the pan itself will in my view be heating the contents by mostly by  conduction :-) particularly if the contents are in anyway liquid :-)

Larisa Walk
pollinator
Posts: 328
Location: South of Winona, Minnesota
70
posted 3 years ago
We prefer cast iron in our sun oven. If you have a dark colored Le Creuset all the better but ceramic casseroles also work nicely, as do brown or blue glass, although they let in too much light onto veggies for my liking. Enameled ware does work but its fragile nature makes it short-lived. We had a 3 qt. pot that came with our oven and it's now been downgraded to a waste receptacle. A blackened stainless steel pot will work if you've nothing else. I wouldn't blacken the inside since it might come off in the food. The nice thing about cast iron or pottery vessels is that they have thermal mass and so will help hold heat longer to even out the cook, particularly if the sun intensity is interrupted by passing puffy clouds.
William Bronson
gardener

posted 3 years ago
I use stainless steel steam table pans to bake in.
I spray the hot insides with oil/water before adding the dough. The pans have developed a dark, low stick finish .
So oiling the outside of your stainless steel might aid in developing a dark finish.

posted 2 years ago
From this post in the Solavore Sport thread:


I'd agree with Tyler that the graniteware is nice for solar ovens. The Sun Oven and the Solarvore Sport come with something that is either that brand or very similar. 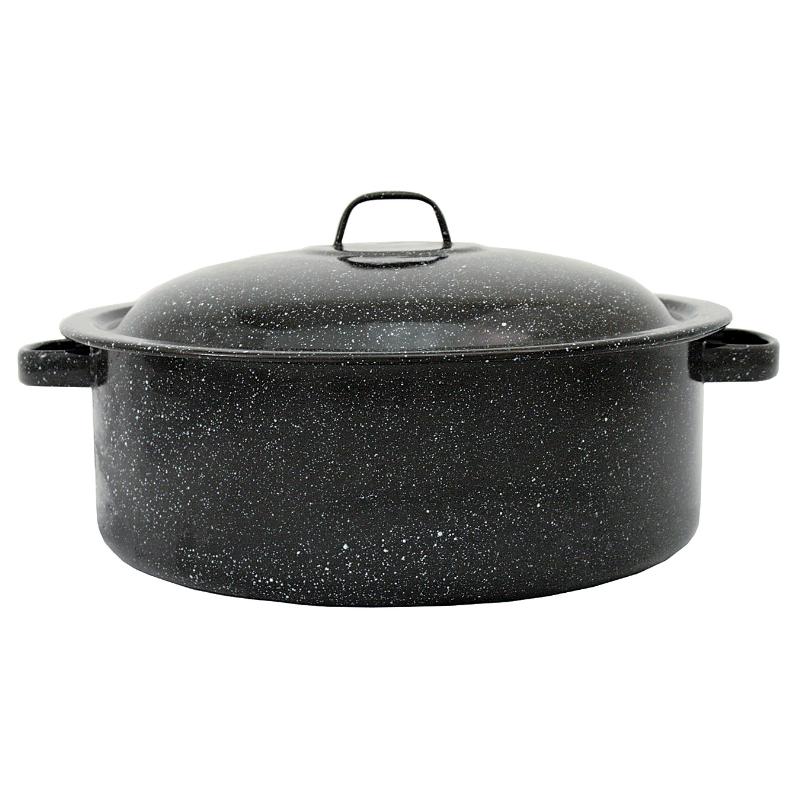 Lucrecia Anderson
Posts: 538
Location: Middle Georgia
81
posted 2 years ago
I believe only the outside needs to be black (so it absorbs heat/sunlight instead of reflecting it off).

I just bought a can of the "stove black" spray paint sold for cast iron stoves and bbqs then sprayed the outside of a couple of stainless steel pots and lids black. Glad I didn't buy special black cookware since my infatuation with solar cooking was short lived.

That was a five years ago, I still use those pans several times a week indoors and the black coating is still going strong.