How can I Fukuoka my front and backyard?

Amiran Ó Floinn
Posts: 5
posted 2 years ago
I started to get into the regretted Fukuoka's very interesting One Straw book and
his pioneering farming methods.

My goal is to plant as much nectar flowers to help pollinators first and foremost,
less about edible fruits and veggies. I bought around 60 seeds of the best and
recommended nectar plants this past winter.

Like most homes, the front and backyard is just useless lawn and weeds.

My only gardening experience is growing tomatoes in pots and volunteer sunflowers in zone 5a-b.

I recently tried to grow buckwheat in a 3 m² test plot as I learned is a fast-growing
and flowering plant but 10 days later, my hand-sown seeds has not germinated
at all and I think it's because I haven't watered enough and/or not
buried deep enough. Does it need daily watering to germination?

I also put white clover around the rose bush and it's growing good.
Still have some annoying large-leaf weed continuously growing around it.

Please help me with tips and suggestions to Fukuoka my backyard, thank you.

Lots of weeds turn out to be useful or even edible plants - can you post a picture of these weeds? 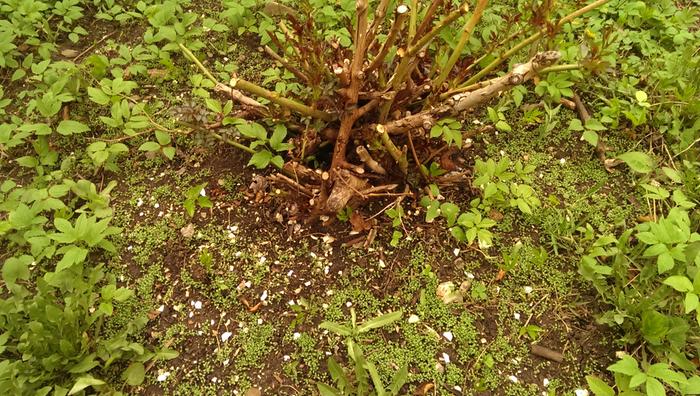 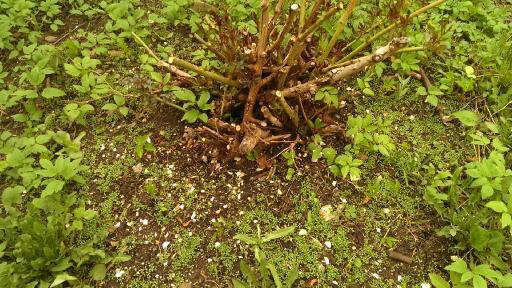 Plus, that plot with non-growing buckwheat, just weeds. 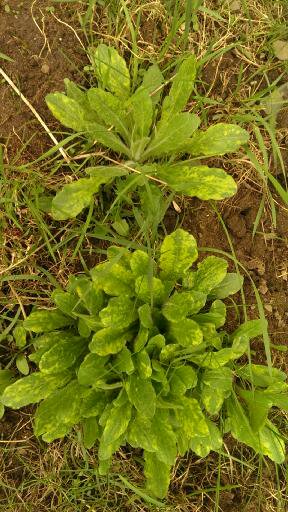 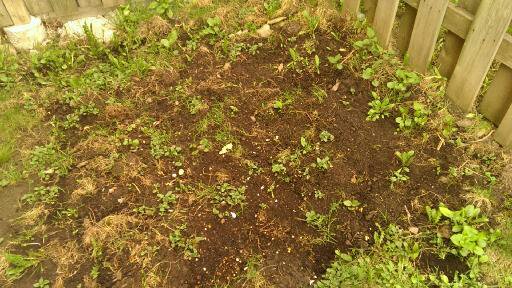 posted 2 years ago
Great that you want to implement the ideas Fukuoka discovered in your own yard.

Buckwheat does not need so much attention to germinate--it is more of a scatter-and-wish-it-good-luck kind of thing, as Paul Wheaton would say.  Has it sprouted by now?  Might it have been eaten?  It is generally OK with things being on the dry side, you may even have over-watered.

The main idea in Fukuoka's book as I understand it is to do less--less of what seems to "help" nature--and let nature do its job more.  So, less watering, less weeding, less pruning.  When you prune a tree, you make it dependent on pruning for a lifetime.  When you water, you select for those seeds that will be dependent on watering.  It may sound like "tough love," but the seeds have been taking care of themselves just fine for much, much longer than they've been "helped" by human actions, they will continue to take care of themselves if you do less and less.

So, I'm saying I think the focus that will help your goal most is to apply this main principle, to nudge yourself in the direction of less intervention, and then observe carefully what happens, reserving judgment.

As for planting pollinators, also a noble goal--but does the land there want to have those pollinators or would it tend toward other kinds of plants?

The weeds are telling you things.  I don't recognize the one you've got there, it looks similiar to our weeds but different enough I'm not sure about it.  Where are you located?  if it isn't edible, it's still serving some functions.  I see it covering the soil, shading, putting in bio-mass under the soil, providing food for the next plant, cooling soil, providing habitat for somebody, perhaps carrying some healing properties for the soil or even for you.

What do you observe? what are ten things you see in that picture?

posted 2 years ago
Buckwheat can take up to 14 days to germinate and even longer without remaining moisture levels in the soil.

Fukuoka san did not mention the fungal network his land already had in place when he started developing his method.
That fungal network is what made his experiments work so well.

A good fungal network will cement soil particles together so they don't wash away as easily, it will create an ability of the soil to hold onto more water molecules for draught resistance and it will increase the nutrient availability of the plants.
Add to that good fungal network a variety of bacteria and other microorganisms and you have a soil that will perform the way Fukuoka san describes.

In many of the US subdivisions you are probably not going to be allowed to have unruly grounds for very long since most of your neighbors will start to complain, either to you or to the home owners association members.

Good luck with your projects.

That looks like its mainly ground elder , with some dandelion and possibly some daisy. Ground elder is a little.....persistant. It is edible but I can't say I have tried it. Unless you want to live with it I would work on removing that before you do anything else perhaps by covering the area, sheet mulching or even continous mowing until it gives up. As it spreads by rhizomes its quite difficult to remove from around plants you might want to establish at a later date.

Good news about buckwheat is once you have some established it self seeds again very easily.

Amiran Ó Floinn
Posts: 5
posted 2 years ago
Good news: the buckwheat has grown extremely fast and has started to show flower buds only after a month!

And the yellow-leaved weed was...

Which I will keep despite its poor pollinating capacity because it look nice and colourful.

I also transplanted five grown milkweek but they didn't survive their new place, despite ample watering and good "resoiling". I was hoping for a new monarch egg-laying station or at least more nectar flowers.

I also bought oregano and Korean mint pots. Like the milkweed, I had to dig a hole in the useless grass to plant them but I don't think that's the permaculture way. It's just I'm too impatient. Would putting the plant inside a 12 inch mound of soil been the Fukuoka way to grow grown plants without disturbing the ground?

Amiran Ó Floinn wrote:{snip}And the yellow-leaved weed was...Fleabane!  Which I will keep despite its poor pollinating capacity because it look nice and colourful.

I'm not sure why you think fleabane [Erigeron] is not good for pollinators.  Maybe because they don't serve as broad a pollinator spectrum as you would prefer?  Once ours are up in our 5b lawn, this is a regular sight at our house, and these are but one type of regular visitor I was lucky to catch on camera last week:

Which type of milkweed do you have?  There are several variants, some prefer different conditions.  Did you get the entire taproot out?  Here's a guide with some basics that might help: 8 Tips to (Successfully) Transplant Milkweed

Don't assume even if you have over a dozen of them that you'll get a lot of Monarchs.  In our small common milkweed patch last year (just under 2 dozen plants then, nearing four dozen this even though I harvested seeds I did not plant), there was only one Monarch larvae I ever spotted the entire season, and I never even saw the egg or even the parent on our plant though I did see one adult lolling through the backyards of my neighbors and ours one day.  Gratis, I don't park a chair on my lawn for hours daily to look for them during the migration, but I was out there every day examining the plants for the eggs in high hopes and still managed to miss at least the one that was born and is pictured here below.   (FWIW, we use no pesticides or herbicides so I'm still wondering why only one our first year here.)

Also keep a watchful eye out on those for ant tended aphid farms.  The farms can be particularly destructive if your milkweed plants are tightly clustered.  I've read it's better to break the plant cluster up in smaller groups, which we have done this year and I'm hoping to good result.  The ants will also attack beneficials like ladybirds that try to eat the aphids.  The image below is what one can look like.  Depending on your ant farmer types and aphid types, the coloration will vary but will look much the same.

Amiran Ó Floinn wrote:I also bought oregano and Korean mint pots. Like the milkweed, I had to dig a hole in the useless grass to plant them but I don't think that's the permaculture way. It's just I'm too impatient.

We are still using some more typical flat beds for our plantings since we have so much remediation to do on our grounds as well as trying to shift and update.  Still, we try to use everything on site and use similar methods to hugel even when the bed overall isn't full out hugel-ed.  So when we remove turf to dig a hole, we use an old fashioned edger (looks like a flat half moon metal at the end of a long pole) to mark out the area, then a fork to lift the turf level and set it nearby.  Then dig the hole, then flip the turf over (root side up) and put it at the base of the hole before putting the soil back in along with whatever we're planting.  That way the hated grass will eventually break down and feed the plant you just planted.  I'm no expert on this sort of thing, that's just something we started doing after I read about how to build hugel beds, and we adapted for the flatter beds without wood within the dug area.  If the hole won't be too deep, so the turf might interfere because bits can still work their way back up, into the compost it goes or we've also used it as filler at erosion points as we have no curb where our property abuts the street.  Eventually we hope to have no turf grass, but we're nowhere near ready for that stage yet even though we don't have much even in our second year here.

Not sure if any of this will help, but this is what I thought to share on bits from your post.
Amiran Ó Floinn
Posts: 5
posted 2 years ago
Thanks for the tips.

I think the milkweed is the common or syriaca variety. I did plant the whole roots in all five of them but I don't think they'll last this weekend.

I planted more stratified milkweed seeds that were kept in the cold for more than a month and still no germination despite babying them.

My borage is germinating nicely but my bee balm, nothing, cosmos, one srpout out of a dozen+, goldenrod, zip. But the dozen volunteer sunflowers make me happy.

I have better luck germinating seeds in free egg cartons, probably because I'm more consistent in watering them from the sink and not having to go out and unroll the hose, etc...! But again, patience is needed for them to grow enough before transplanting. Couple inches high and two true leaves are the transplanting norm, yes?