loom dust and lung health. What can we do to protect our health when weaving?

posted 2 years ago
Weaving produces a lot of lint and a lot of dust.

Lint is created by individual fibres working loose from the yarn.  Dust, is well, dust.  Fine particles that float in the air and settle on objects in a dusty way.  At the end of each project, there is often a pile of dust and lint under the loom.  It's amazing.  Well, think about the amount of lint that comes off the dryer with every load, it's like that times a lot.

Lung problems are one of the biggest problems for workers in the textile industry.  especially those who work with cotton.

I was reading about the dangers of loom dust and it got me thinking, maybe this is something I should be worried about.

On the farm, I'm exposed to a lot of lung irritants.  Chicken dust, wildfire smog, other potentially damaging stuff.  Ever since I had pneumonia a few years ago, I notice I'm sensitive to these things.  Coughing and wheezing if I'm exposed to them for too long.

I'm taking steps to protect myself when weaving.


Not certain what other options I can take.  Any thoughts?

posted 2 years ago
My tips would be:
1. Get 8hrs of good sleep
2. Drink 1gallon of water per day
3. Check for and avoid food triggers
4. Eat nutrient dense food and kefir probiotic
5. Do full range of motions movement  (yoga/etc)
6. Indoor air-purifiers
7. Outdoor air/nose mask

posted 2 years ago
When Kilauea volcano was emitting ash plumes the past couple months, I would wear a dust mask when I worked outside on my farm. The dust masks I used had one way valves in them. Therefore warmth and moisture didn't build up inside the mask, making using them way, way more comfortable. The brand I used was 3M and it was a N95 rating. I would wear them for hours with no issues. Since I had asthma as a child and several bouts of pneumonia as a young adult, I take care of my lungs.

posted 2 years ago
Definitely,  vented dust mask is essential whenever i'm doing anything dusty indoors or out.   I sew a lot, cut a lot of batting, polyester fleece and some of them I have to shake off the fluff.    That's on top of having smoked for 20 years - even though I quit 24 yrs ago, I'm sensitive to dust and suffered a dry cough every winter UNTIL I discovered Mullein Root Tincture.   It's an expectorant that completely cured it in a couple weeks and lasted for a year.   I'm getting back on it this fall as I'm starting to feel a little congested again and it's time to thoroughly clean the coop, haha.

This winter I'd like to play around with making a mask out of different fabrics.  It needs to grab dust particles but I find most masks too hot or stiff or steamy or uncomfortable elastic on the ear.....  I wonder if there's a high tech but not synthetic,  thin fabric that I haven't tried yet.   Is linen dense enough?

Also, if I were weaving for hours I'd consider a modular air filter close to the loom.   Filters can get pricey but = less housekeeping I would think :)
Judith Browning
Posts: 7635
Location: Ozarks zone 7 alluvial,black,deep clay/loam with few rocks, wonderful creek bottom!
1464
posted 2 years ago

Industrially grown cotton has a lot of chemicals involved in growing and processing.  These dyes and other stuff, could get in the air and cause problems.  So I'm looking at alternatives to regular weaving cotton.  Once I use up my existing stash, I hope I can start working only with organic materials.

This is exactly why I switched (in the early nineties) to organic or no pesticide warps and wefts (Romanian hemp and foxfiber color grown cottons and some unbleached linen) and well used/washed recycled clothes for 'rag' wefts after a decade of weaving with what ever I felt inclined to use, mostly natural fibers commercially dyed.

Just browsing some of the conventional farming magazines ads for cotton farming inputs was enough to convince me along with knowing some of  the commercial dye processes and then assuming that some at least of those chemicals are carried through the dust into my lungs.

At the same time, I was working on integrating my work for money with our lifestyle, so organic and recycled fit perfectly.
Health issues aside, it was an important step for me to see that I needed to use the same standards for my money earning work as we tried to use for our homestead....lots of choices became clearer and I then had the job of explaining that to my customers.

I did not solve the dust/lint issue even after more than thirty years, and of course, dust is dust, even organic dust and lint can cause lung problems.

For the first ten years that I wove we had no utilities, public or otherwise, so no fan, etc.
Later I sometimes used a fan blowing across the warp.

An air filter is a smart move.

Ecolution from Romania had natural and peroxide bleached in many weights.  The yarn had come along way from the early rough twine and was wonderful to weave with and had little fall out.

Foxfiber color grown organic cotton was beautiful and a wonderful warp but lots of lint while weaving.

I'm not sure any of this is really helpful, I'm thinking in fragments at the moment, kind of rambling a bit......

You do such wonderful work and I can see you're in this for the long haul....worth putting the thought and effort into making it as safe and healthy as possible.

posted 2 years ago
Can you control the airflow in the room? A laminar flow of air (slow and steady, no eddies) is used on laboratories to protect sensitive equipment from dust particles by flowing clean air over them.
Susan Pruitt
pollinator
Posts: 285
Location: North Carolina, USA Zone 7b
69
I like...

posted 2 years ago
I love that you bring up these diverse topics R Ranson!   It's probably serendipity that I've been contemplating switching my business to all organic natural fabrics - but I've procrastinated because I already have money invested in polyester inventory.   You remind and motivate me to get serious about a transition.

Anyhoo - Good point Sebastian - yesterday as I was doing my daily rearranging of window fans and thinking they need to be cleaned, it dawned on me that perhaps it could be a simple cheap way to do a "pre-filter" by setting a fan behind the loom, blowing away from you, to redirect the floating particles from your face.    If you outfit it with a mesh filter, or gauze fabric on the face of the box, or even fashion a sort of "swamp cooler" box with a layer of moistened straw held on by netting to catch the dust, it would collect the large particles as an extra layer of protection and not clog your expensive filters as fast.

Almost daily I think sadly about the textile industry that no longer exists in my region which used to be called "The Textile Capital of the World".   My only source of affordable fabric for my business is China.   The monstrous denim factory in my town has recently been converted to apartments, retail and a small business incubator.   It's lovely and a nice transformation to the building that sat empty for 30 years.  But it's still depressing that we've lost all those jobs.   (and selfishly no more fabric outlets around here!)    While googling filtration systems I found this history article fascinating.

posted 2 years ago
In the end I bought a conway purifier. 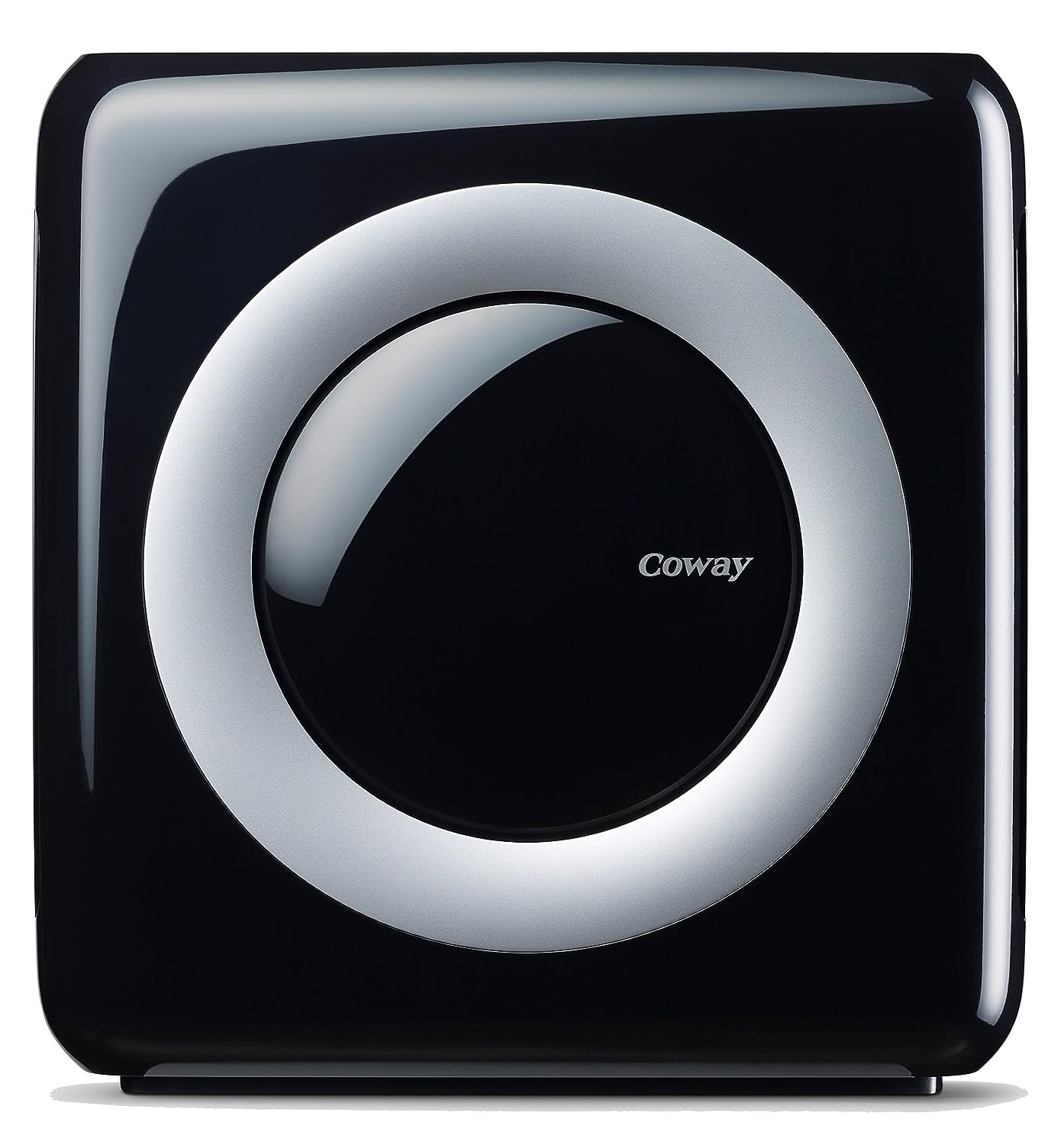 I haven't figured out what the ionizer does.  I could probably look it up on google.

Since I got this, I've been experimenting with having it in different parts of the house during different tasks.  Because it detects the air quality and adjusts the fan accordingly, I can see what effect my actions have on the air quality in the home.  Cooking and cleaning are the most harmful.  My crafting is usually medium.

Having the air purifier on has reduced my allergy symptoms and helped my cough considerably.  So much so that I'm buying another one.  Expensive, but I think it's worth it.  It's been a long time since I've been able to breath easily.

posted 2 years ago
I cleaned the pre-filter and air-quality-sensor yesterday.

It's a bit early for both, but my house is pretty dusty and I wanted to see if it was making a difference or if what I'm feeling is a placebo effect.

The pre-filter had almost a quarter inch of dust and fluff on it.  I used a vacuum to clean it and the machine works much better now.  To clean the air quality sensor, I used a lens cleaning brush with the little air puffer that I use for my camera.  It had a fine layer of white powder around it.  It's scary to think that this was in the air I breath.

That's the air purifier I put in my bedroom.  I bought a second one for my studio which I don't use as often so I haven't cleaned it yet.  But I think I'll clean it before I start weaving each project so I can observe how much dust and lint different materials produce.