How to Make a Traditional Roux

posted 2 years ago
I have been making this as a basis for my gumbo for many years.  It is really easy to make if you have patience.  To me, it is not much different than making gravy as this is also how I make my gravy.

Take equal amount of an oil and flour,  setting the flour aside until your oil, grease or lard is melted in your frying pan or stock pot.  For a roux, butter is not recommended as it is prone to burning.  Maybe, 3 Tablespoons of each to a cup of liquid, would be a good starting point to learn.  If making this for a recipe, use the recipes guidelines.

I also recommend using  cast iron  as it is easy to keep a low constant temperature.  I also like to make mine with bacon grease.

Slowly add the flour to your melted lard or oil, stirring constantly, then cook the flour and fat over medium heat until they form a smooth paste while continuing to stir the mixture.

Next, lower the heat and cook until the roux is a dark, chocolate brown. Stir very frequently and scrape the bottom of the pot to avoid burning. This should take an hour or more.  I don't cook mine that long though the longer you cook it the more flavor it will have.

Now add your chopped vegetables to brown, like onions, celery and bell pepper or what your recipe calls for.

At this point you are ready to add liquids or broth, stirring while adding the liquid slowly.

Here is an oven method that I have not tried.


Oven:  While not the traditional way of making brown roux, we feel that the oven method is easier and more fool-proof, plus you don’t have to baby-sit the roux quite so closely.

Preheat the oven to 375°. In a dutch oven or other oven-safe dish, start the roux on the stove-top by cooking the roux over medium heat until it forms a paste. Move the dish to the oven, uncovered, and cook for ten minutes. Stir the roux, being sure to scrape the bottom of the pan. Continue cooking and stirring every 10 minutes until the roux is a dark, chocolate brown. This should take an hour or more.

https://www.thekitchn.com/tip-how-to-make-a-brown-roux-73211     That link also has a recipe and instructions for a Roux on the stove

Here are a couple of videos that might help.  Everyone, including me, has their own techniques: 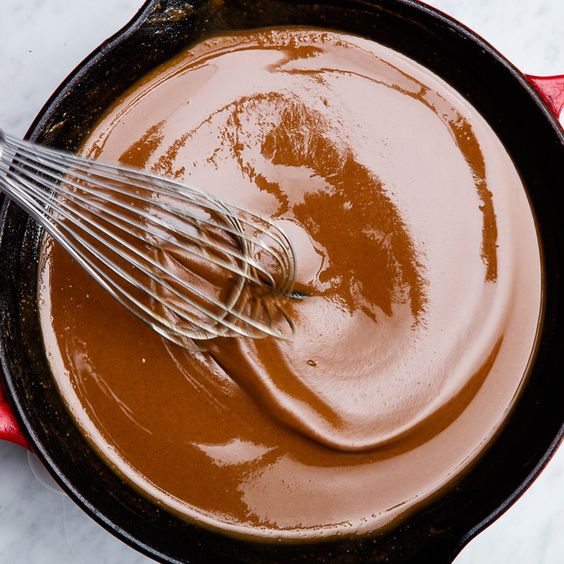 posted 2 years ago
You could clarify the butter first, skim out the milk solids, and then proceed. That way, there's nothing to burn. It has a higher smoke point than lard. 232 C, or 486 degrees fahrenheit.

I do this any time I'm making a hot oil herbal infusion. No burning, no unwanted nutty or bitter tastes (although I sometimes brown the milk solids intentionally, imparting a toasted, nutty taste to it).

And I love using my enameled cast-iron pots for sauces and roux. The even heating makes all the difference.

Thanks for this, Anne!

posted 2 years ago
We do a similar thing:

For braise, sear the meat well in a frypan with salt/pepper then use the remaining juices in the pan for the gravy base - will need to add more oil and bring to heat before adding the SR flour.

For a traditional baked dinner, after roasting the vegetables in the oven, which has pepper, salt, garlic, and a herb that compliments the particular cut of meat (e.g. rosemary, thyme, etc), use the same oil/juices for the gravy. If the juices from the meat aren't overly fatty, they go into the mix too.

We don't mind the odd bit of herb or thing in the gravy, otherwise it could be sieved for more cultured people!

I've seen chefs sieve the gravy into a saucepan and add large chunks of butter to add a glossy sheen to it - yikes, skip the after dinner mint and take a cholesterol tablet instead!!