posted 1 year ago
How delightful! 😃 Thank you so much, Greg!

posted 1 year ago
Is Nine a reference to Paul's favorite move?

Nope. I'm apparently the ninth Jen who's been here.

The weather person said it was going to be warmer today, but the breeze blowing today took away any feeling of warmth we might have had while working outside. 30s, but felt like at least half that.

Today Josiah, Lewis, and I worked on the Love Shack. They stripped all the exterior and interior siding off, removed the furniture from the inside, and now we're getting ready to replace all of that. It wasn't well insulated when it was built, so we're going to redo the framing to be 16" OC instead of 24", insulate the walls, add in a window, relocate another one, rebuild the door, reinsulate the floor, rehang the siding on the exterior (after routing it with a half-lap), and close in the 'attic' area. No big deal, right?

To start our work today, I removed the window from its frame so we can redo the framing around it. To get an idea of the framing we needed to do, I then mocked it up in SketchUp with regard to reframing the old window and framing the new one. Also adjusted the studs in the mockup. Exciting stuff. :)
SnowyWalkway.jpg
FramedLS.jpg
Window.jpg 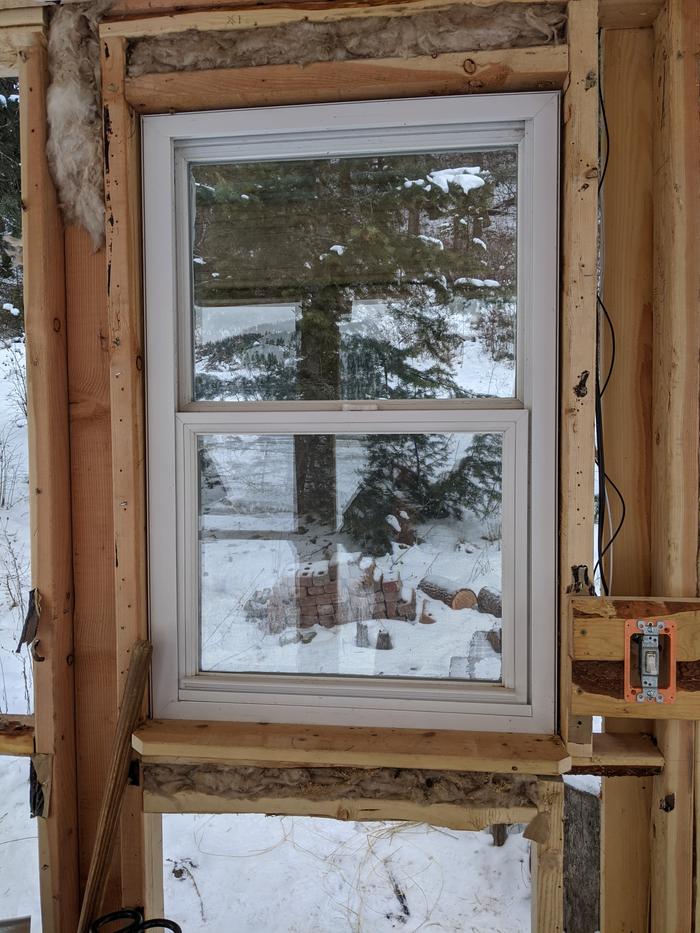 Today we continued working on the Love Shack. I walked Lewis through how to frame a window in a wall. We were able to measure and cut the lengths we needed down in the wood shop and assemble them in there to avoid doing it out in the snow.

For the first window frame, the stud we were using for our king was already standing in the framing. We were able to assemble the rest of it, then carry it up and marry it to the king. What a wondrous kingdom we're creating in here!

The second window frame in the south wall didn't have any of the needed studs in place, so we cut and assembled the whole thing in the shop then carried that up. The middle rail (why does this thing even exist??) needed to be cut to allow the insertion of our new window framing. It fit in snug as a bug in a rug. Woohoo!

We cut and installed the rest of the studs for the walls, added two new studs for the north wall, attached the bottom plate of the west wall framing to the flooring (seemed kinda vital), and I started disassembling the light fixture so we could put it in a proper box and install it into the stud. Other than adding one more door stud, the Shack is just about ready for exterior sheeting then siding! Gettin' so close. Felt like we made really good progress today.

It was Taco Tuesday tonight! Ugh, so good. The beets were droppin'.. well, almost droppin'. Beet Bae was being a tease. The beats tho, those were definitely droppin'. We lit some fires. Ate the good foods. We tooted some poots. All the things. Life is good here at Wheaton Labs.