So I have almost finished uncovering the stone walls in two large rooms’ which has been incredibly hard work. Seriously I’m in pain pretty much everything hurts at this point. Hopefully a few more days will see it finished.

So once that is finished my next job is to create walls separating rooms. My plan is to do as per photo attached’ to make a frame back it up with plywood’ fill frame with cob, remove ply then naturally plaster it. This to me seems to be the quickest way to go about it. I was wondering if anyone has done this practice before. Also does anyone have a better quicker method.

Also another question is, as the cob in the frame will be covered in a natural plaster and it doesn’t really matter how much the cob in the frame cracks is it possible to just make a mix of cob that is just clay and straw. My reasoning for that is the fact that our land is basically clay so we have an abundance of the stuff.
CDC3B9DC-755F-45FB-8CB5-8701C825E746.jpeg 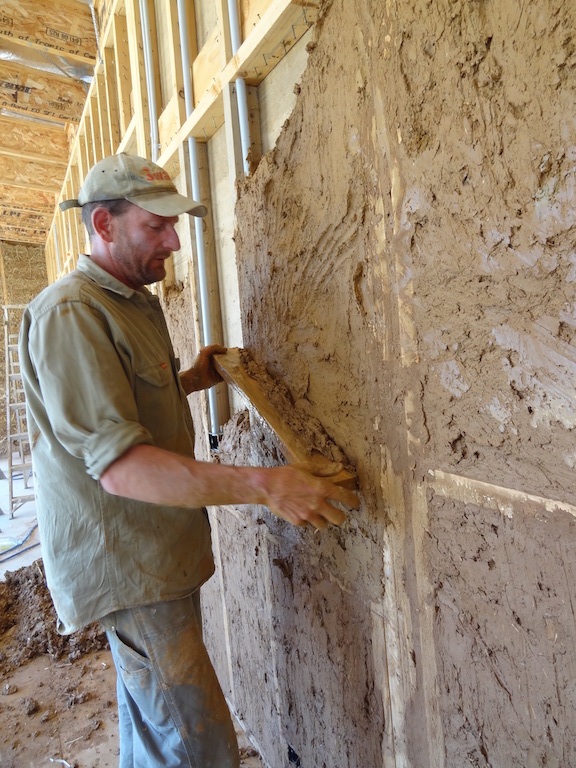 I have no first hand experience, but I think your cob will shift/crack much more than you expect(more so than your plaster will be able to hide) - your wood frame will expand/contract as moisture levels change(as your earthen plaster will be vapor-permeable) and will cause cracking, or a least cracks will appear at your frame-to-cob interfaces. So making your cob to the most ideal formulation is probably best to minimize this effect?

posted 2 years ago
Much easier/quicker method is simple wattle and daub. Just build vertical posts with 2x4s or cut your own poles from excess trees laying around. Then weave more poles/sticks/bamboo/vines/anything that works.

Alternatively copy what i did (see photo) and use 2x4's for the posts and then use lathing strips to create a surface with many gaps.

Daub over this material on both sides with a wet cob mix, i like it a bit higher in clay content than normal and lots of fiber. Once this dries just plaster over like normal and you have a very sturdy wall.

Chris Howard
Posts: 14
posted 1 year ago
Cheers for the reply’s folks, actually just seeing this. Been busy with life and finishing uncovering the stones. Finally done it (what a nightmare that was).

We are now looking at light straw clay as an option, I was wondering if instead of making frame with wood if it’s okay to do it with metal stud framing as there was some on the site when we bought it. There would be enough for a few walls.

posted 1 year ago
Light straw clay would work well too, the metal framing is okay if the temperature fluctuation inside the house won't be too great. If the wall is located near a heat source I wouldn't recommend using the metal as it may well crack the wall over time.

Also it is best to tie the framing into the natural material of the wall too, using deadmen to key into the light straw clay will greatly increase its strength. This might be more difficult to do if you are using metal.

Chris Howard
Posts: 14
posted 1 year ago
Thanks Daniel, our plans on how to go about things on this project seem to change every 2 minutes. The new one is to make walls from pallets and fill the inside with light clay straw. The huge benefit to this is free walls, you couldn’t beat that with a big stick. The price we were quoted for 2x4s from the local saw mill was ridiculous 11 euro for 1 at 2.5 metres. We found a good supply of pallets yesterday at a local builders merchants. Will let youse know how I get on. Thanks again guys for the comments you are all fantastic with the advice.
Tobias Ber
Posts: 525
Location: Northern Germany (Zone 8a)
25
posted 1 year ago
Hey Chris,
what about glueing, screwing, nailing, doweling and whatevering pallet wood together to make "2x4"s?

Chris Howard
Posts: 14
posted 1 year ago
I like that idea, especially as quite a few of the pallets we have are a bit higgledy piggeldy and will take a bit of work to make the walls straight. Others are great and walls could be made no problem. The problem with pallets I find is that they can be a bit of a git to take apart. Cheers for the advice, much appreciated.
Tobias Ber
Posts: 525
Location: Northern Germany (Zone 8a)
25
posted 1 year ago
hey chris,
to take pallets apart you could use a sawzall, sabre-saw with a blade for metal or a genaral purpose deconstruction blade. and then just cut through the nails. i mean the "seams" where the individual pieces of would connect together. and then just leave the nails in the wood. it wont matter for doing your walls with straw light clay or something...