Raspberries in the middle of garden, what to do?

Philip McGarvey
Posts: 49
Location: California, Redwood forest valley, 8mi from ocean, elev 1500ft, zone 9a
17
posted 2 years ago
So, I inherited a garden that has a big raspberry bed planted last year right in the middle of it.  :(  My understanding has always been that raspberries are best kept outside the garden, like on the edge of the woods or somewhere, because they can spread and take over the garden.  It's only year two of these raspberries, and they obviously are spreading, and I'm wondering what I should do.  I don't want them to take over the neighboring beds and turn everything into a big thorny raspberry thicket.  If I'm overexagerrating the danger of this, that would be a relief.  Ideally I'd like to just let them be there.  They are tasty.

- Are they going to just keep spreading, out of their bed, under the path, and into neighboring beds?

- Is there any practical way to prevent them from taking over without completely removing them?

- If I must remove them, how can I best do that?  Do I need to dig like 2-3 feet down and remove all of that dirt in order to get enough of the roots out to stop them from just popping back up?

- When is the best time to remove them?  It's spring now, and they are growing, so maybe the best time would have been during the winter, but since it's too late for that, now is better than next winter, to keep them from spreading for the rest of the summer?

- If I do remove them, what kind of things should I plant on top to maybe help suppress them from coming back up?  We'd probably want to put some kind of veggies in here, but maybe it'd be wise to put in a tougher cover crop for now to keep the raspberries down.

I've attached two photos of the bed.  The raspberries were originally planted under these little trellises, but they've spread and filled the paths between some of them. 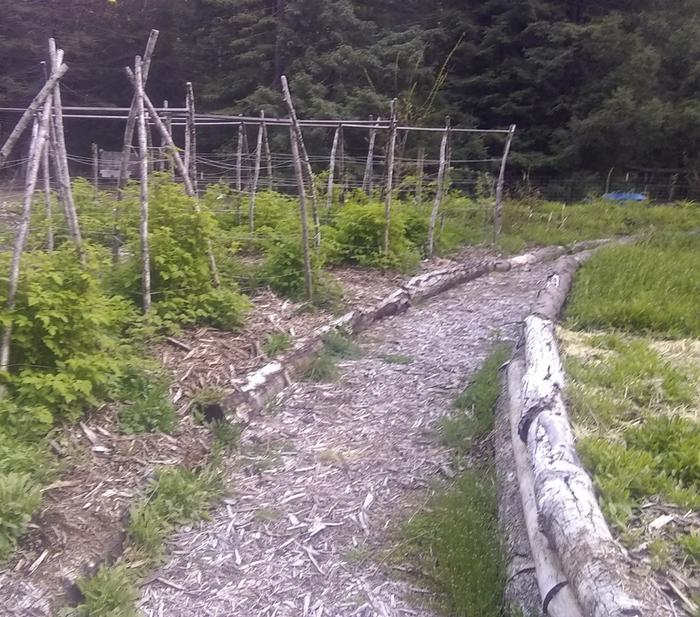 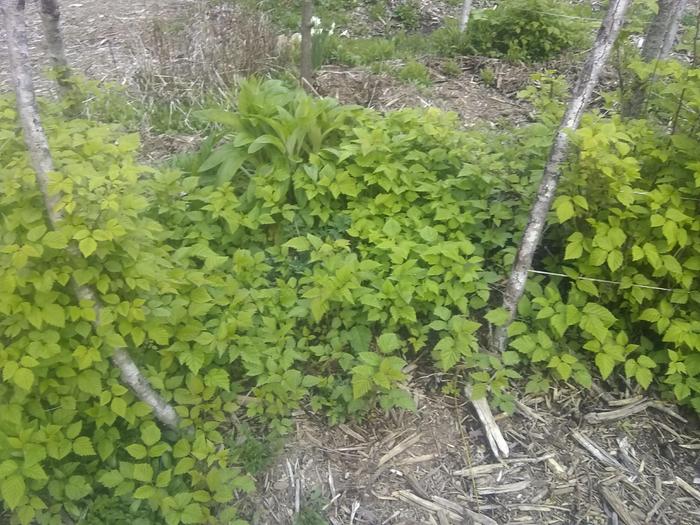 posted 2 years ago
If it were me I'd just leave them. They're established and are good food, good for bees and I believe the leaves are good for tea and livestock feed. Do you have any animals? A good way to control any plant is to find some sort of economical use so you cut it back regularly. How much land is it?

I would like to leave them there ideally.  I have been cutting the leaves from the canes that came up in the paths, and drying them for tea.  Hoping that that will help slow the spread.

posted 2 years ago
Hi Phil;   I'm sorry to tell you that you have raspberry's forever.  The root system will be everywhere.  When I bought my place there was a tremendous raspberry patch.  Many little old ladys came by asking to pick.  They assured me they would pick them all...   ha ha never happened. That patch was incredible! I did get many  jars of raspberry jam brought to me.

One day the county road crew came along...  ignoring my NO SPRAY signs.  They spayed poison on the whole garden!  Killed everything, our thoughts of an organic garden flew out the window that day.
Had I been home other things would have been flying! Imaging leaving in the morning to a 6'tall thriving berry patch and returning that afternoon to a brown wilting rotting mess !

Meanwhile, although the huge patch was dead, the hillside across the road  and the small kitchen garden by the house still had berrys.  Those plants are still spreading.  Constantly popping up in the raised beds. The tap roots are huge, I don't think without poison you could make them quit.

Enjoy your berrys , invite many happy little old lady over to pick.  You have berrys forever!

Joylynn Hardesty
master pollinator
Posts: 3609
Location: Officially Zone 7b, according to personal obsevations I live in 7a, SW Tennessee
1394
3
I like...

posted 2 years ago
Do you know the variety name? Pot up some babies and sell them off!

posted 2 years ago
Raspberries and Blackberries sprig up from the root system so you can keep control of them with some effort through pruning canes.
As Joylynn mentioned, potting up the new "pop up" plants is a good way to keep them where you want them.
Many people will buy these baby plants if you offer them at a farmer's market.
You might even be able to locate some chefs that would love to have them for seasonal dishes.

I didn't read the whole thread, so I'm just addressing your concerns of them spreading. Yes they will definitely spread, so think of it as an opportunity for someone. See if you can get 2 or 3 gallon pots, maybe from a landscaper who throws them away; then use a flat shovel to trim those rhizome type root runners of back at the bed, and dig the trimmed off start up for transplant into a pot. If you can get free discarded pots and some good bulk potting soil every season, around the the same time these new rhizomes will be comming up. You can easily propagate your raspberries for and additional income stream, or to expand their production elsewhere. When the starts are (just coming up), they propagate/transplant fairly well for quick establishment in pots, that could be sold off, or given away in 4 to 6 weeks. A tall sprinkler on a timer could make the additional work of watering these pots low maintenence untill they are ready for sale. You can run an add in cragslist or other free classified adds to sell your new product.

On the bulk soil aspect, mixing your own is easy. That way you can make sure the pH stays acidic by not adding lime.

This would be a are great project for kids. So if you're not up for it, but know someone who is, just show them how. Then your raspberries can get maintained in a symbiotic type relationship benefiting all parties involved.

posted 2 years ago
Personally, I'd let the raspberries have that bed, and open a new garden area for other plants. Raspberries are excellent, sell well if you want to, and are a pain to remove. I'd plant a few things on the edges of that bed this spring, the berries probably won't overgrow it totally by end of season, and start getting another area opened up, and make your next planting in there.

I'd LOVE to have amok raspberries here! If you dig them out, mail them to me :D  Or sell them. People will pay for rowdy raspberry plants, or for raspberries, or raspberry jam. You have an awesome asset there, work with it rather than fighting it. Easier to change your mind about what you want than make raspberries obey you!  :)

Ken W Wilson
pollinator
Posts: 1172
Location: Nevada, Mo 64772
110
posted 2 years ago
Raspberries are a very high value crop.  I’d at least give them a few years while you get some established in a more convenient location.

Are the producing good?
Alexis Richard
Posts: 49
Location: Southeastern Louisiana
4
posted 2 years ago
I mean... I'll take all the babies you care to pot or wrap!