tree vs pond vs greenhouse

posted 1 year ago
This is a little complex, I drew a pic to help visualize it. I have a natural ponding point I want to make into a pond. There is a good sized maple right there, it's roots would be in/under/part of the pond (tree is the big brown spot.) It's where the ground breaks from fairly level near my top elevation, to where the slope starts (maybe 12 degree slope, downhill to the north.) Problem winds are from the SW and N, SW being the way tornadoes come in, N being straight line high winds in winter. The greenhouse location is within reach of that tree if it falls SW to NE. I don't want the greenhouse splattered. I don't particularly want to cut the tree (although it's a definite option.) 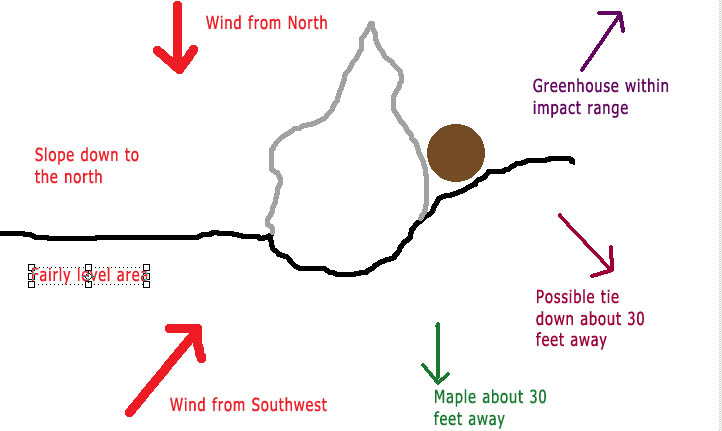 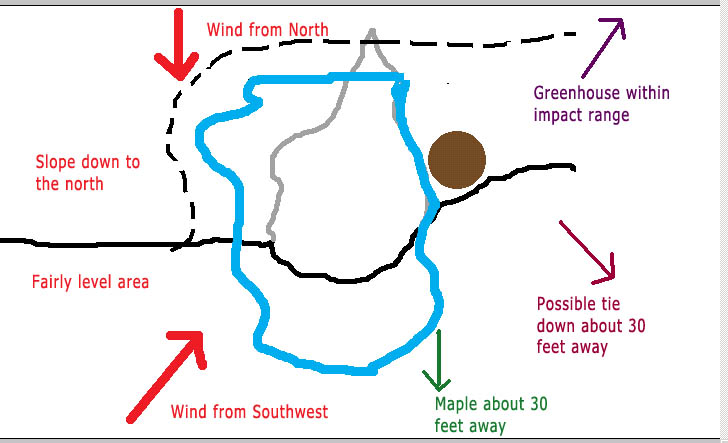 If I put a pond right there (see second pic, dotted black line is new ground level, basically extending the level soil out around where I want a pond) (yes, good structure, probably won't fail, not relevant to this discussion about tree) will it strengthen or weaken the tree, more or less likely to fall? Tree has a slight natural lean to the West. I have a maple about 30 feet away due south it could be guy wired to (how?) and there is a tie down point in cement that used to have a carport on it, not sure how sturdy it is, that it could be guy wired to southeast of it. I'm thinking if it's wired, maybe it could be steered to pivot if it falls. The maple tree due south of it would be the best angle for that, but I don't know what that would do to either of them. Not sure what good tying it southeast would do, just an option.

What do I do? The more I write, the more I think the tree is getting removed, (or top pruned?) as even if I don't put a pond there, it's a greenhouse killer.

That's the best uphill pond point in the area, and I'll have a trackhoe and skidsteer out there that can build it easy.

posted 1 year ago
How big around is the trunk on the maple?  Maples by me (red maples) live in very wet conditions.  Soft maples do as well.  So if it's either of those kinds, it may not mind the pond.

I'm kind of wondering if the tornado needed to pull it down wouldn't also be big enough to destroy the greenhouse with other debris anyway?

I doubt you'd want to guy wire it to anything as a preemptive measure.  The wire would be in the way 99.99% of the time and when the big twister hits it could rip it out anyway.  Tree cutters can make it fall wherever they want, especially if it's leaning to the West and your greenhouse is to the NE.

posted 1 year ago
I'd tend to agree with Mike: a guy wire would create as many complications as it does solutions.

I'd go with your suggestion of topping the tree as a temporary solution.  By taking some of the mass out of the tree, it mitigates the danger of it coming down on your greenhouse, as well as allows more sunlight below so that you can start another tree or two that would be better suited to the situation, before ultimately taking the maple out.

If the tree ultimately dies due to the wet conditions, you'll have taken down some of the more difficult branches already, and leave yourself with a smaller job in the future.  But if it's happy, and if you can selectively prune it so that it works in that location, you'll have an established AND SAFE tree.  Win/win.