Mike Oldham
Posts: 5
5
posted 1 year ago
I needed a way to heat my shop with a wood stove without actually putting it in the shop so here's what I did.

Where I work, we use 100+ year old bricks to put freshly poured aluminum blocks on. The blocks (actually called sows) range in the 900 degree area, weigh about 1600# each, are stacked 3 high, and the bricks dont crack or explode. Only problem I ran into using them is theyre not all the same size.

Used landscaping adhesive on the bricks and when done, put quikwall on the outside for support. I have refractory im going to line the inside with, but the temps are too cold to do that right now. Have to wait until spring to finish that part.

Used 4" duct pipe, only cos' I had it on hand. Maybe should have gone 6"? Also had a nice 4" blower thats used to push air on the cold side into the box. After a couple good hot fires, I'm not worried about zinc fumes.

The roof are a couple of old road signs I had but I'm going to make some aircreat interlocking slabs at some point to replace them.

Other then the adhesive and barrel kit, and having to make a few trips to get the bricks, I had everything else on hand, so I'm in about $100.

Looks good, I know those "sows" well. I do shut downs at Kaiser Aluminum.
I would recommend filling that box with as much heavy mass as you can fit. More heat to blow into your shop. Solid scrap steel / cast iron / auto parts ??
Here's another thought. Build another brick box inside or outside the one you have, leaving 2-4" between them. Fill that space with an insulator. Perlite comes to mind.  Then fill around your barrel with heavy heat holding mass. Use fans to move the air.   Your now insulated away from the heat stealing outside air and all that mass will stay warm for hours.
Consider using a pull fan from inside the shop rather than a push fan outside.
I would try your 4" pipe because you have it. But look around and scrounge some 6" or even bigger pipe, I think you may want it.

posted 1 year ago
And your going to need some serious insulation around those outside pipes.
I would suggest running them under ground ,with foam insulation on all 4 sides. Figure out how to get in the shop when you get there.
The earth and the air will steal more heat than you might think.

Mike Oldham
Posts: 5
5
posted 1 year ago
Hi Thomas, thank you for the suggestions

I have castable refractory, like morter, and a bunch of refractory "putty", and a few rolls of kaowool (?) that we used in our furnaces at work, which unfortunatly went out of business two months ago...which is how I ended up with all of it. The kaowool would insulate it beautifully but I'm not sure about any fibers that may beblow off it and then be blown into the shop. Also, when it gets wet, its mush, and I think in a good rain, this will leak from the roof. The refractory may offgas when heated, though I'm not sure. Its industrial and not really made for this application, but would be waterproof, though not sure of insulating properties. I have an inline fan I can pull air into the shop with, but afraid the temp of the air would cook it. Because its only 4" I thought of using both fans, but havent got that far yet.
20191126_154734_HDR.jpg 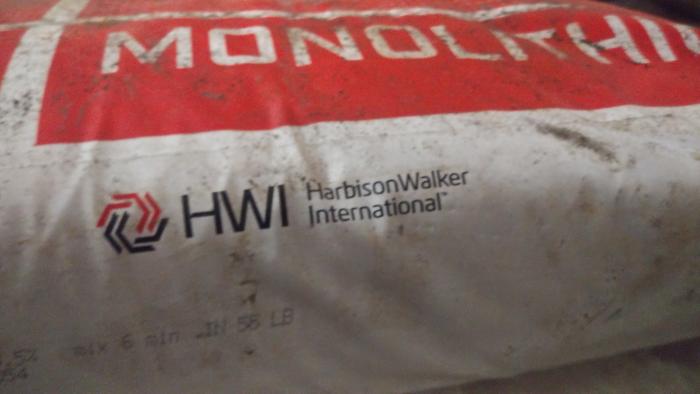 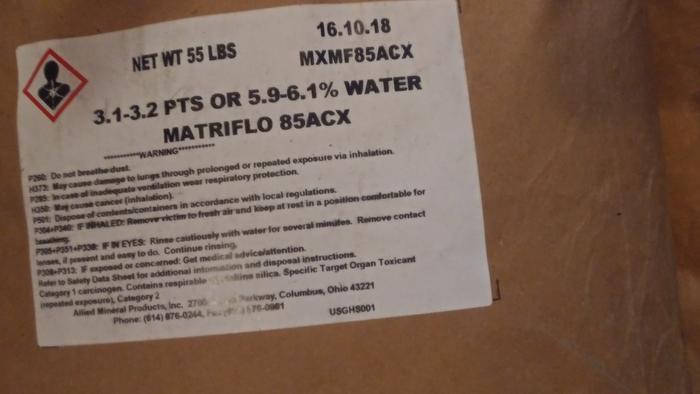 Mike Oldham
Posts: 5
5
posted 1 year ago
I was thinking of putting kaywool around the pipes and then covering with plastic. Keeping it all waterproof without the heat of the pipe melting anything I tried waterproofing it with may be a problem. Cant go underground with the pipes, that's beyond what I can do myself.
thomas rubino
Rocket Scientist

posted 1 year ago
Hey Mike; I understand , physically unable to dig a trench.
Wouldn't need to be very deep. Could you Hire a teenager to dig ? It looked to be all lawn so digging 8-10" down should go pretty fast.
Heck to start , just try the kaowool  around the pipe with plastic to seal and give it a go. If it fails move on to plan B
You will know if your getting enough heat inside to justify the amount of wood burned outside.

Insulating with a double brick skin and filling with mass will help you bunches.

Sorry to hear about your job!  Something new will come along , it always does for folks that want it to.

posted 1 year ago
Really cool build Mike!
You mentioned aircete slabs over the top of the stove.
If you are into making  aircrete, a layer of it over the brick walls and the pipes would do wonders for the insulation,plus it's notoriously fireproof.
I'm not sure if it would need a waterproof covering(adding air to concrete can help withstand freeze thaw cycles) but it might help it retain insulating properties.
You used quickwall on the existing brick structure, surface bonding cement is used to line water tanks and pools, so maybe parge the outside of the aircrete with that.

Thanks for sharing this interesting build, I'm looking forward to seeing more .

bruce Fine
Posts: 955
32
posted 1 year ago
like that design, ive been tryin g to figure out how to get some hot dry air into my woodshed without having to worry about catching the whole place on fire and what you have done is better than anything I have come up with.
thomas rubino
Rocket Scientist

posted 1 year ago
Lets confirm how well it works.
This is a "Hasa" style burner. They have been around since the mother earth news days.  Work very well but...  they normally use 12" vents buried underground, with big fans...
Mike has a really cool build started here.  I'm very curious how well he can move heat in small pipes above ground.  If his shop is insulated it may work outstanding! We will see.
Keep up the good work Mike and keep us posted.

Mike Oldham
Posts: 5
5
posted 1 year ago
To start, I'd like to thank all for the comments, and support.

I've not fired this up yet because its going to smoke like crazy the first time i do, so I want to wait until night time to do it. The shop, which was a stand alone two bay garage, is insulated beautifully. Air gaps around the bay doors, but if it's a problem when the real cold weather hits, I have plastic I can cover them over with.

I wish I could run the pipes underground, but getting them into the shop would be challenging. I think. For now I'm going to see about wrapping them in kaowool and then seeing if I can waterproof it somehow. 50 degree weather for the next two days so i need to jump on that. Didnt think about aircrete over the pipes. Have to give that some though.

Right now the roof are just a couple of road signs I picked up from work years ago. Not sure what the reflective part is made of, but I bet it smokes bad once it heats up. Going to do aircrete interlocking slabs at some point for the roof, but I haven't done it before so it'll be a bit before I get that going.

Dont know if I can link on here, but here's a video of what aircrete is if you havent seen it before. Should have made the whole thing out of this stuff.
https://youtu.be/zTvy5Ut8eps

Updated pic from this morning. Added support wire cos' I almost lost it in high winds the other day. Buckets with bricks are holding it for now, I'll anchor it properly at some point in the near future. Also had 4" of water in the barrel. Going to have to seal everything up. Maybe use high heat silicone, or that refractory putty I have. 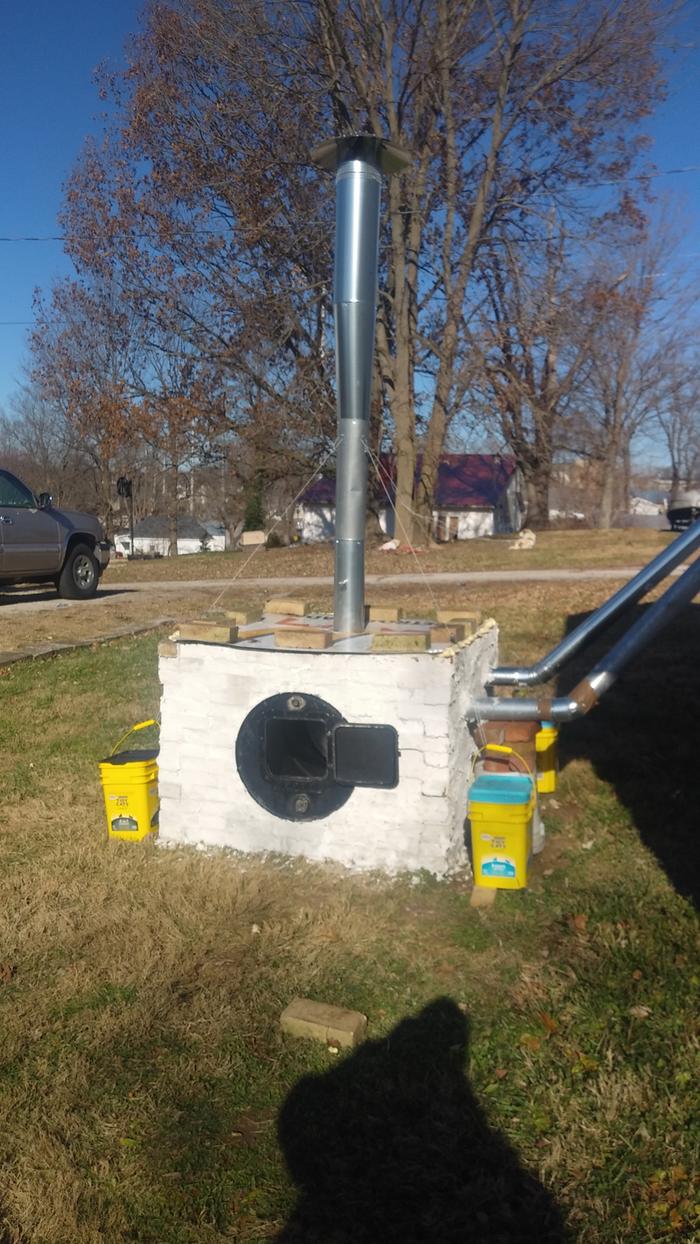 Mike Oldham
Posts: 5
5
posted 1 year ago
Hard to see for some reason but it's hitting 87 degrees coming into the shop. Needed to burn a hotter fire to get all the paint off the barrel, but at least I have heat coming in....and a lot of smoke from the burning paint. I'll give it a good firing tomorrow and burn everything off. Barrel alao doesnt have enough draw so, because I have the bung holes above and below the door, I'll get a piece of pipe to screw into the larger hole and put an adjustable flap on it. That should let enough air in.
20191223_204036_HDR.jpg 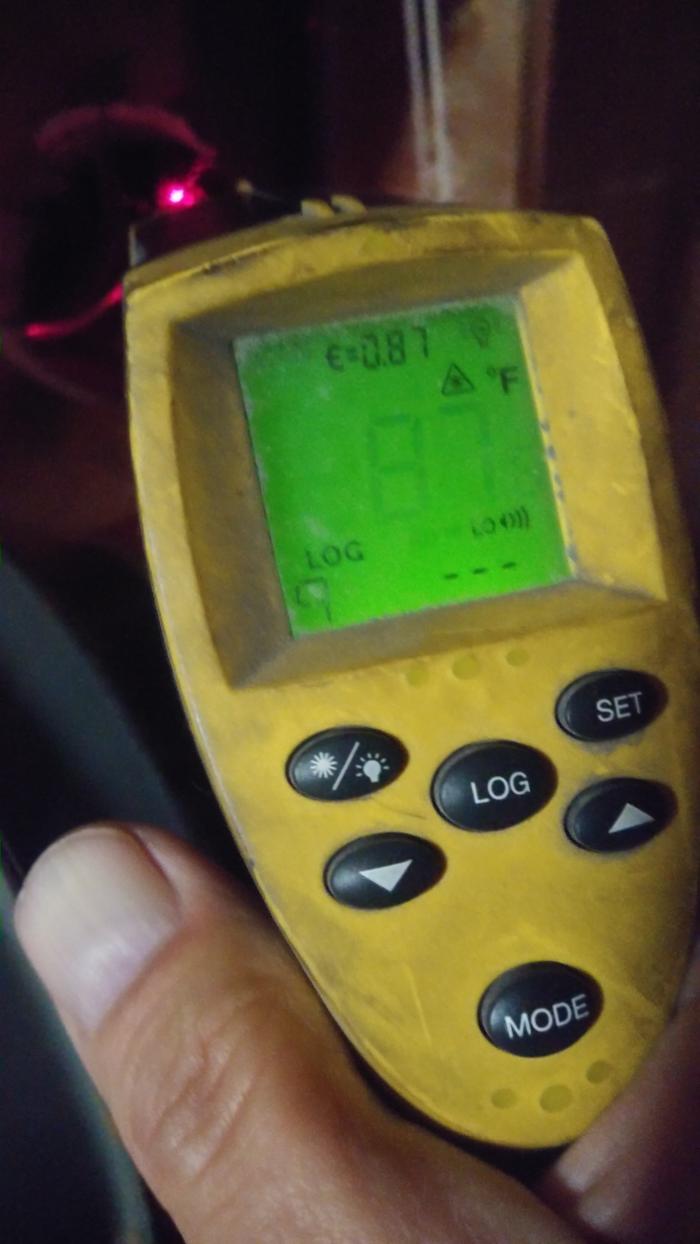