posted 8 months ago
I made a cheesecake the other day, non-dairy, very low sugar, filled and topped with fruit. Someone said they wanted the recipe, so I am pasting a lot of my response to him here.

Uh, I don't use recipes. I make it up as I go along, I cook by concept, not recipes. The concept behind cheesecake is it's a creamy sweetened base, set with eggs, so classic NY cheesecake is cream cheese, sugar, vanilla, and eggs. I like more in it than that, kind of a fruit cake cross cheesecake, so I tend to dump in any fruit I have on hand. This one has raisins, craisins, and candied lemon peel in it, and I topped it with cherries I canned. So to make it I put the dried fruits in a bit of coconut milk to rehydrate for a while, shaking every so often, mixed them with coconut cream and vanilla, mixed it up, added sugar to taste (taking into account the eggs are going to dilute it) then when I liked what I had, added eggs to set it, and poured in into a pan lined with crust so it doesn't stick. Crust on this one was 2 graham crackers, chopped peanuts, oatmeal, ginger powder and enough melted butter to make it so I could work with it. Bake until set. That's really as close as I can get for giving you a recipe.

If I was starting with fresh or frozen fruit I wouldn't have rehydrated it. If I wasn't having dairy issues I'd have started with any cream that appealed to me (I like sour cream cheesecake!)  Any sweetener works, honey etc, or no sweetener and make savory cheesecake (which is amazing in it's own right! Try a sour cream base, garlic, bacon, and chopped tomatoes!!) The thinner the cream you use, the more eggs you add to set it. I prefer to err on the side of excess eggs, because I'd rather it sets up well, and like the protein hit to stabilize the sugars in my body. Do it well, and you can claim it's healthy food!

Technically cheesecake is a pudding https://en.wikipedia.org/wiki/Pudding and any of the old recipes for pudding are fun to look at for ideas. Using their definition of pudding: ingredients in a mostly liquid form are encased and then steamed or boiled to set the contents then looking at the list on that page, they missed tamales, which are technically a pudding, being a paste filled with stuff encased in corn husks, and steamed to set. That notion and pease pudding have infected my brain this morning, and I'll be making up some odd stuff here for a while!

A few of my favorite past cakes:

What kind of weirdness do you do with cheesecake? The weirder the better! Pass on your weird ideas!

posted 7 months ago
I have been wanting to make a cheese cake so the last time we went to the store I bought cream cheese.  My favorite recipe came from the "Montana Mining Company" or something like that. a restaurant that my sister worked for.

The ingredients that I remember were cream cheese, sweetened condensed milk, lemon juice and a graham cracker crust.  That's it.  Mix together and put in the fridge overnight.

I haven't gotten around to making it yet and thought I would do it without the crust.

Thanks for sharing yours.

posted 7 months ago
I don't know if this is technically weird, but I have goats and so a lot of milk. I rarely make cream cheese, but I do make a lot of chèvre, and this cheesecake has become one of my favorites. We call it

Beat eggs and sugar until light. Add salt and vanilla and mix well. Add chèvre and blend. Fold in whipped cream. Pour into crust and bake at 350°F (180°C) for one hour. Turn off oven, crack the door, and let the cheesecake cool inside the oven for another hour. Makes a 12-inch springform pan cheesecake, or fills two 9-inch pie pans. 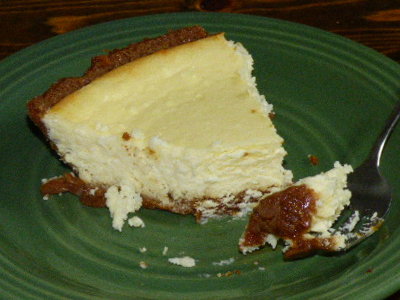 Looking over the recipe, I'd have to say it's definitely not weird 'cuz it's plain old vanilla. But then, maybe I'm the one who's weird because vanilla is my favorite cheesecake!

C Fox
Posts: 8
2
posted 7 months ago
love that you make your cheesecake with 'Concept Cooking', Pearl. Goes to show just how creative we can be to whatever suites us.
I enjoy making mine with lots of fruit and I'm going to try some of the ideas you shared. One can be totally creative!
Your cheesecake sounds delicious too, Leigh Tate! "Heavenly Chèvre Cheesecake" with goats milk appeals to me too.

C Fox wrote: love that you make your cheesecake with 'Concept Cooking', Pearl. Goes to show just how creative we can be to whatever suites us.


Yeah, I think people get too hung up on "must follow a recipe" where do they think recipes come from? Someone like me makes them up!
One of my sisters asked asked me once "are you congenitally able to follow a recipe?" I said something like  "I suppose I technically could, but why would I want to?" She's a recipe follower, and has more money than me. Sometimes she'll clean out her fridge and send me things like a bottle of some sauce with one teaspoon removed, that was all her recipe called for, she bought it, and never used it again. Works for me, she buys expensive stuff I can't afford, happy to get her fridge clean out!

posted 7 months ago
My cheesecake is a custard type. I make a pastry crust, I put in apples fried in butter with cinnamon, and I pour in a custard of cream cheese, sugar, eggs, vanilla, nutmeg, and a bit of bourbon. Then I give it a shake to release air bubbles and put it in the oven at 350F until it's done. I garnish with a light drizzle of brown sugar caramel.


Anne Miller wrote:I have been wanting to make a cheese cake so the last time we went to the store I bought cream cheese.  My favorite recipe came from the "Montana Mining Company" or something like that. a restaurant that my sister worked for.

The ingredients that I remember were cream cheese, sweetened condensed milk, lemon juice and a graham cracker crust.  That's it.  Mix together and put in the fridge overnight.

I haven't gotten around to making it yet and thought I would do it without the crust.

Thanks for sharing yours.