Spring is coming and I'm building a new coop for my free range broilers.

Why a mobile coop?
- I use leased land and if I have to change sites I'd like to bring along my equipment (lesson learned the hard way)
- Lazy factor - Not having to muck out a coop
- Being able to move the chickens to new areas

So I have no welding skills at this point and pretty basic carpentry skills. I decided to purchase an old 4x4 utility trailer to build my coop on.

So here is ground zero: 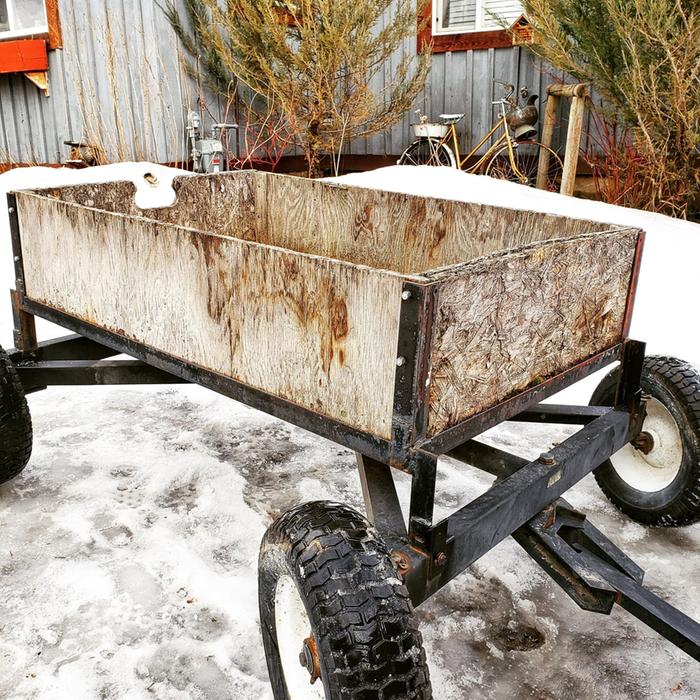 I would like to build a coop that I can pull around by hand and raise 75 broilers during Spring/Summer/Fall. The birds would only roost in the coop at night and roam free during the day.

Would love help designing an awesome coop that can help me with my growing composting and market garden business :)

posted 1 year ago
So this will have to house 75 broilers at night at what age? I'm trying to get a sense of how much square footage you will have to have.

posted 1 year ago
OK, I'm assuming also that you are raising a breed that's more active and athletic than a Cornish Cross or similar?
Even so, that suggests you'll need at least 1 square foot/bird for night accommodation? That may require *really* good air flow if it's hot, as the birds generate a lot of heat just breathing.
At one square ft/bird x 75 birds = 75 square feet. That's not allowing for feeders or water. Do you have a plan for some sort of feeder or waterers? Were they going to be only available during the day? We have found that during the heat of the summer, the birds eat/drink more at night than during the day, but Hubby does the commercial Cornish Cross.

If you go for 75 square feet, I think you'd need to rebuild the trailer wider and longer? That would be tricky at the front due to the steering, but maybe start widening it behind the front wheels with supports, add a bunch of length between the wheels and then actually widen the rear wheel position? If not, I'm concerned that what you put on top to get enough floor space will be unstable.

Do you actually need to transport the birds in the trailer? What if you use the trailer to hold and transport some sort of origami folding structure that will protect the birds at night, but the birds will actually be on the ground? Kind of like a tent trailer idea, but just the walls?

What sort of foot-print would be ideal in your opinion? The most efficient shapes to enclose (circumference vs area) are  squares or cylinders. A square 8 ft 8 inches would give you about the 75 square feet. That's more than two 4x8 sheets of plywood laying on to of the frame you posted.

A big part of the problem with meat birds is how fast they grow. They don't need any where near that space at 4 weeks. At 4 weeks the need more protection and warmth than when they're older also. Would some sort of modular arrangement work where you add extra modules as they grow?

Granted we're dealing with the Cornish Cross, but the one year when the usual portable shelter hubby used was down for repairs, I used 3 mini shelters, each 4'x8' for about 120 birds for night-time use. In fact we moved the largest 60 birds out of the brooder first into just one shelter. The rest out a week later into a second, and when they started getting crowded at night because they'd grown, we took the smallest from the "big boy" shelter and the largest from the "little guy shelter" and put them into the 3rd mini-shelter. I was really happy with the results myself. None of these shelters have floors and we moved them to fresh grass daily.

Yes, they will be Mistral Gris, not Cornish. They are a much more active bird. This will be there shelter at night. They will have other forms of shade/rain cover, feed stations, and water.

I was thinking about expanding 3 side leaving the side closest to the steering/pulling mechanism, however I measured and I could bring that side out a foot without hindering movement.

I was thinking of having a staggered perch system inside to help create more resting space for as they get older.

For ventilation I was thinking the floor would be completely open (chicken wire and braces) with windows on the side near the top.

I like origami idea but I'm not sure if it's in my skill range.

posted 1 year ago
Ashley, we have stopped using chicken wire in favor of hardware cloth, as we can't get a heavy enough gauge of chicken wire locally. The hardware cloth is a bit trickier to work with (*don't* assume that just because it "looks" square, that it is!), but it's much more resistant to vermin!

Are they reliable night perchers? We have found with our layers, they don't tend to be happy perching at night until they're close to 5 mnths old. They like the concept of perches and play around on them in the day, but if we check on them at bedtime, the use is not consistent. That said, our adult bird perches are about 3 inches wide, so maybe the younger birds just need something smaller. Our perches are removable, so maybe I should make up some narrower ones and next time we've got young birds, I'll start them out with that set?

That's what I love about discussions like this - it gets me thinking about ways I could be tweaking my own system!

Jay Angler wrote:So this will have to house 75 broilers at night at what age? I'm trying to get a sense of how much square footage you will have to have.

Perhaps you might consider reevaluating your flock size to match your coop dimensions. That frame doesnt look stout enough for that size flock imho. I could see that frame working for two dozen or so if your land is flat.

posted 1 year ago
Hey guys just wanted to update you on my project.... it's 99% done! Just need to install the solar-power automatic door!

I present you... Coop Du Jour! 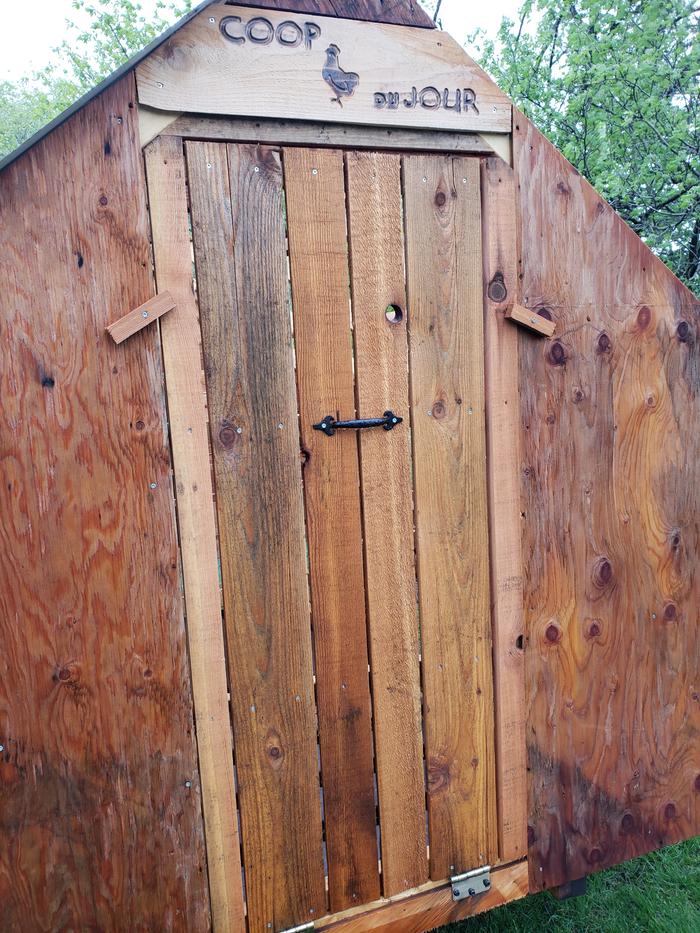 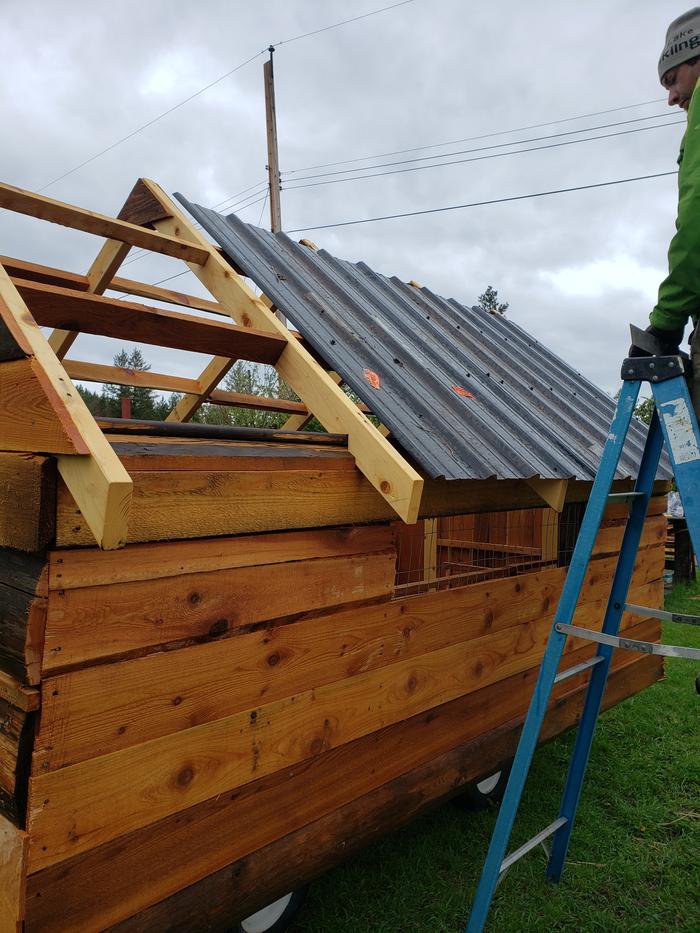 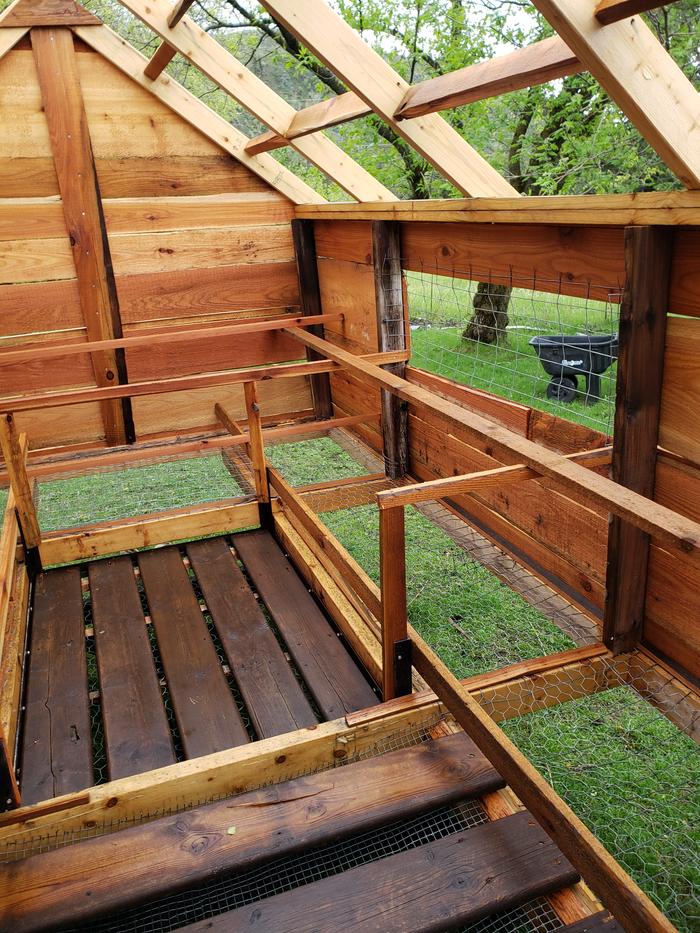 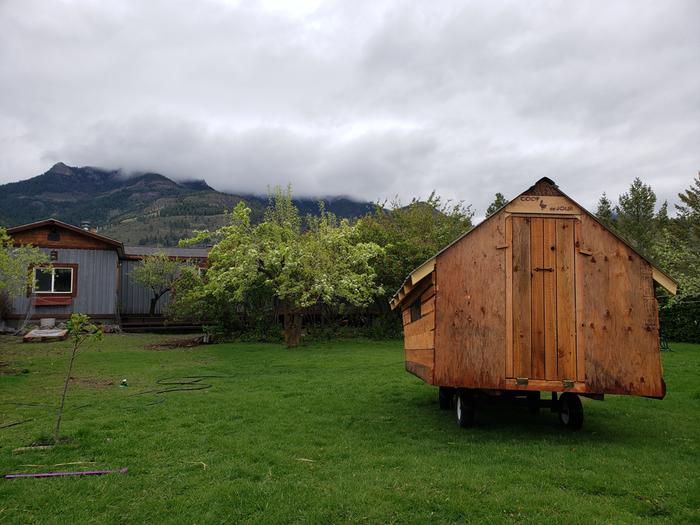 So a little back story on why I wanted a mobile coop. I'm raising meat birds as part of a CSA program and they are located on leased land. This year I'm on a new property. Unfortunately I made the mistake of having a stationary coop at my last location so I could not re-use the infrastructure I already created. I took this opportunity to not only improve the design so that it require minimal mucking out but also create a coop the could be moved on a flat bed to a new location if required. Not to mention it can now be used as a coop for pasture rotation of the chickens.

I branded this coop as part of the Brand a Physical Location - PEP BB. See my sign below: 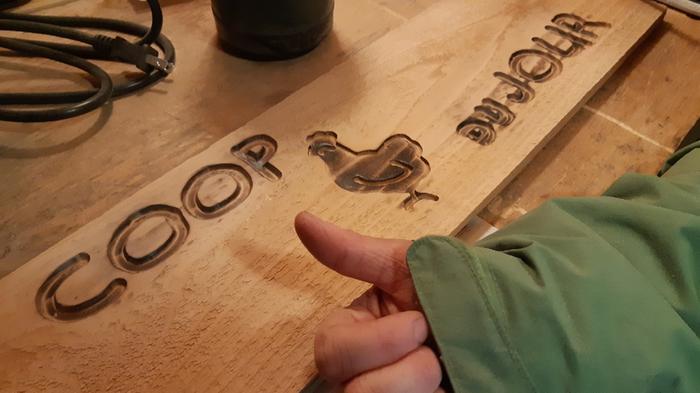 Why do we need to name it? Well because the name is awesome but also there will be two coops on the land this year; a pasture poultry coop (not named yet) and Coop Du Jour that will remain in a single pasture this year. There will be 55 birds in Coop Du Jour and 15 birds in the pasture coop in rotation with cows.


Okay so to give credit where credit is due... I made the sign, I designed the coop (will post the my drawings), sourced the second hand trailer, but my fiancee 100% built the rest. Here is a video of him giving a tour of the coop:

Eric Donahue
Posts: 10
2
posted 1 year ago
When I rebuilt a hay wagon I bought a shed framing kit from northern tool:
https://www.northerntool.com/shop/tools/product_572_572
It made it simple and sturdy to build a coop atop the wagon.