Mike T Jones
Posts: 8
posted 1 year ago
Hi all! This is my first post... I've been occasionally following Paul & other permaculture gurus for years, supporting kickstarters as far back as World Domination Gardening DVDs, but have always lived in St. Louis City/County with only dreams of finding a way to get out of town enough to do more than small hugelkultur beds... Well coronavirus may have actually given me that opportunity as I've been working from home often enough that I think I could get away with only heading into the office once or twice a week...

I'm looking at a 5.4 acre property in a couple of weeks near the Missouri Ozarks where I love to go to get away as often as I can... Not a ton of land by any means, but affordable, close to a small town (I see that as a perk, it's just what I'm used to & the only way I can work from home is with a solid wired internet connection which looks possible there). It's in a flood plain as it borders a spring fed creek along about 20% of the perimeter. Pretty flat as of now. I was thinking if it looks promising in person & I go for it, that I'd buy a manufactured lofted barn & build out the interior... like a 14'x32' with 8' lofts on both ends... Mainly because I am handy as far as traditional houses go & I could rent it out later when I eventually build something more, but I could get that up & fully functional to my needs pretty quick. As for being in a flood plain, I'd have to do some dirt work to elevate the home & then I'd hopefully be able to cut down trees on the property & build Hugelkultur mounds along the creek for the start, hopefully digging out a pond on the property & transferring much of the dirt to build the mounds along the creek. I'm thinking along the lines of Sepp Holzer's "Water is Life" video on youtube.

So, from a building on a flood plain perspective, does anyone have any alternative suggestions for something say similar size-wise that could be done relatively quickly with a decent amount of research or educational courses or whatever necessary ahead of time? From the land perspective, any suggestions as to what to do with this kind of land (flat next to creek)? I consider living right next to a spring fed creek to be a big perk, at least eventually... I just love live water & I'm an electrical engineer, I'd think I could build some small hydro generators in the creek & do some thing with that at some point... any comment on pros/cons of having a spring fed creek on the property?

Thanks so much for any ideas... very much a newbie & I appreciate all relevant feedback!!

Mike Jones
bruce Fine
Posts: 1197
56
posted 1 year ago
part of my property is in, I guess you could call it a flood plain, I never dreamed I'd ever see water there, till it was flooded that is, about 1/3 but but not quite 1/2 of my front pasture, now becoming a chestnut grove was under water for several weeks, be sure of your topography, many places are high and dry in summer but lots of rain in the fall winter or spring can change things quickly in many areas. sometimes a flood plain only floods every few years or by the decade but when it happens theres no stopping the flooding.
Jay Angler
gardener

posted 1 year ago
Flood issues:
1. Where is the "flood water" coming from - in other words, what is up-slope? Is it other farms with underground petrol tanks, persistant herbicides or even CAFO-sized poop lagoons? Alternatively, is any flooding going to just be run-off from wooded areas and the rain itself? One will deposit fresh topsoil (that was how farms along the Nile persisted for centuries!), the other toxins you may not want.

2. Flooding can be sudden, unexpected and a once every 100 year event. I live in an earthquake zone and it's overdue, but I've still no idea if it will happen in my lifetime. Events like that are hard, but not impossible to do long-term planning for. You want to know where the "force" of the water will come from and go to. If you simply mound up soil, will the water simply wash it away? Will swales redirect it? Or do you bight the bullet like many did on Kaua'i after a particularly bad typhoon - build a house on concrete posts that would keep them above the water. They used the under area for shaded patio space.

Flood plain soil can be superb for growing on. Five acres is enough to provide lots of healthy food and having access to clean water is important. "The Problem is the Solution" - but with the increase in unpredictable and over-sized storms, if I was planning, I'd plan for worst than the worst even if the neighbors think you're crazy to do so!

posted 1 year ago
If you can find details of the flood levels in the past, by looking at trees, fences or asking around that will be good info.
The local authorities may have data.
Build the house to be above that line.

Maybe consider building on stumps above the flood level.

Changing the area near the creek can be problimatical, it can change the flow of water, causing erosion somewhere else and may not be allowed anyway.
It seems a pity to cut down trees to build the mounds you speak of

Mike T Jones
Posts: 8
posted 1 year ago
Thanks for the input thus far. From what little I know thus far, it's flooded once in the last 17 years & comes from the creek.

As for cutting down trees, that would be for Hugelkultur... but only if necessary. I wouldn't do it right away & would look for places where I could get old or rotting wood first.

posted 1 year ago
17 year gap for floods, is something to be concerned about.
Are the fences damaged from the flood water, I can help with that.
I dont understand you words about the property line going beyond the creek.
Are you saying the creek runs through your property?

posted 1 year ago
You might do better with building on pilings like they do for hurricanes which allows the water to flow under your house.

posted 1 year ago
Put the house on stilts/pillars. Thats how they build house that actually sit in the river 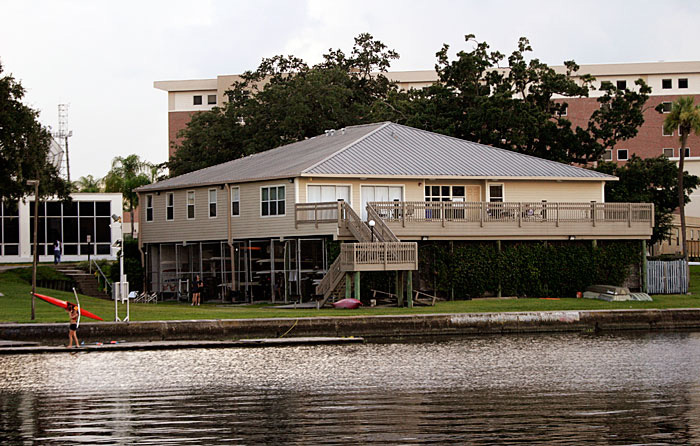