posted 6 months ago
Anyone have a PTO wood chipper that they would like to review?  I'm looking at the WoodMax WM-8H, but would welcome any input.

posted 6 months ago
You have lots more HP than I have.  The Titan states it will take on  4 inch limb. Of course, the general rule is 1/2 what the seller claims.  I tossed in a dried 4 inch Hickory limb, it chewed it up and spit it out.  My feeling is that it will chew up whatever fits in the feed ... but 4 inch is the largest piece I have tried or intend to.  When things get that big, it is firewood.

Also, I have used the thing all summer. The blades are reversible. I also bought an extra set of blades.  The fact is the original edges are still plenty sharp.

I have had it jam up on me once. That was because I fed it a bunch of a vines.  It was an easy clean out.

Although not a true self feed, it does a pretty good job of pulling limbs in without much help from me.

Titan is a pretty good company to work with. The chipper was delivered with no added charge.
IMG_0215.JPG
IMG_0209.JPG 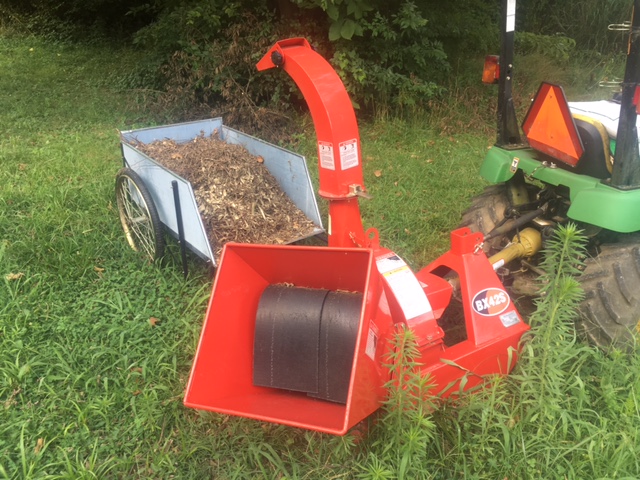 I can't speak as the the WM-8H, but have been using a woodmaxx MX-8800 that I'm very pleased with.
It is running off a JD 790 and so far have had no significant problems.
I've mostly been feeding green spruce/pine and some smaller hardwood through it.

Pros
- made in America
- The thing is a beast, steel is heavy plate, well engineered/constructed.
- Compact design, allows me to get into tight places in the forest/landscape
- a bit lighter and a more compact than the MX8H, though I think the feeder on the 8H might be better.

Cons
- the feeder tends to slip on some of the larger green spruce Y-branches (can't gain a bite)
These branches simply need to be backed-out and trimmed. However, one time when backing out a y-branch,
a stub got hung-up on a hole and jammed the branch in the machine.
Had to shut down and took some cussing and cutting to undo the jam, but all was good in the end.


I only have about 10 hours on the machine and is about ready for it's first service/greasing.
I don't really feed anything larger than 2-3" through it (that stuff is used for firewood),
so the blades have held up fine and I haven't need to mess with them yet.

Chips are very fine and used some birch chips for growing oyster mushroom in buckets.
Also useful for processing sunflower and corn stalks into mulch.

Tom Berens
Posts: 31
Location: New Mexico
1
posted 6 months ago
I have a WM-8H and it is a great machine, have it on a Jinma tractor that is 25 hp. It is made in China.
Eric Hanson
gardener

posted 6 months ago
I am following this thread with keen interest.  At various times I have considered the very same discussed here so this is very interesting to me.  Please do tell us all your experiences with these chippers.

R Scott
pollinator
Posts: 3737
Location: Kansas Zone 6a
158
posted 2 weeks ago
Have you run wet stuff (green corn stalks, cane, Johnson or Sudan grass, etc.) Through the bx42? It looks VERY similar to old silage chopper designs, and I really need one to make barrel silage and compost.  Most plug with wet material or are WAY more expensive and lighter built.

posted 2 weeks ago
I have not run your full list through it.  It cannot handle vines such as honeysuckle.

Gray Henon
pollinator
Posts: 279
Location: Appalachian Foothills-Zone 7
47
posted 2 weeks ago
Can anyone post pile pictures and how long it took to chip them?  I've never been able to justify a small chipper for mulch production because the labor/cost perspective just didn't work out.  I'm better off piling the brush to rot and buying the wood chips, but often wonder if a PTO chipper with the extra hp might come out better.

R Scott
pollinator
Posts: 3737
Location: Kansas Zone 6a
158
posted 2 weeks ago
Thanks. Nothing handles honeysuckle, so that's not a surprise.

posted 2 weeks ago
Trace, Grey, Everyone,

I have mentioned this before, but I will throw in my two cents in anyways.

I think the usefulness of a PTO chipper depends highly upon one's own intended uses.  If one is planning on regularly chipping a lot of small diameter material, then a PTO chipper might well make sense.  Trace, I have occasionally looked at the Woodmaxx 8" and 9" PTO chippers both for their large capacity relative to HP needs and their relatively low price points.

Grey, you wanted a picture of a large pile of chips and I have this one here

This picture was taken just over a year ago after having spent several weeks collecting brush.  The chipper is not a PTO chipper but rather a 85HP diesel 12" self powered chipper.  It still took several hours to chip everything but I could hardly believe how many chips it made.  I still have about 1/2 of those chips a year later just sitting in a pile.

Everyone has different needs, but I personally could not justify the cost of a PTO chipper.  In my experience a chipper will reliably chip up about 1/2 its rated capacity (a 6" chipper will handle a 3" log without problem), but the closer one gets to the rated capacity, the more the chipper bogs down.  The chipper I rented could make short work of virtually every stick, branch or piece of wood that I fed it.  I did feed it 3 12" diameter logs and they went through slowly, made a lot of chips but took their time.  If I was really wanting to chip up a lot of 12" diameter material, a 12" would be marginal IMO.

But again, My needs are to collect a bunch of brush, stack it and then chip it all at once, every year or two so renting a machine makes a lot of sense to me.  But if you plan on using it on a regular basis on much smaller material, then by all means go with the PTO model.

Regarding the chip pile, it was ultimately over 7' tall by about 20 feet long and 15 feet wide!

posted 2 weeks ago
Howdy,
I bought one of these, because the warehouse distributor is in oregon. Frieght was free to me and I got it in 3 days. It will handle 5" pieces, but I burn wood 2" and larger(stovewood). I don't burn pine and it will chip a 5" piece. After the last 2 years of bigger wildfires, I haven'f been able to burn as much brush as I need to get rid of small fuel loads. I like using the tractor cause I can move around and am hoping that some of the areas that I am chipping and spreading chips back onto the forest floor, will produce mushrooms in the future. I have 40 acres of woodland and this seems to suit what I want to do, to reduce forest land fuel load. The red clay dirt here can use all the mulch I can chip. My tractor is a Kubota L2900, rear pto is rated 25HP. 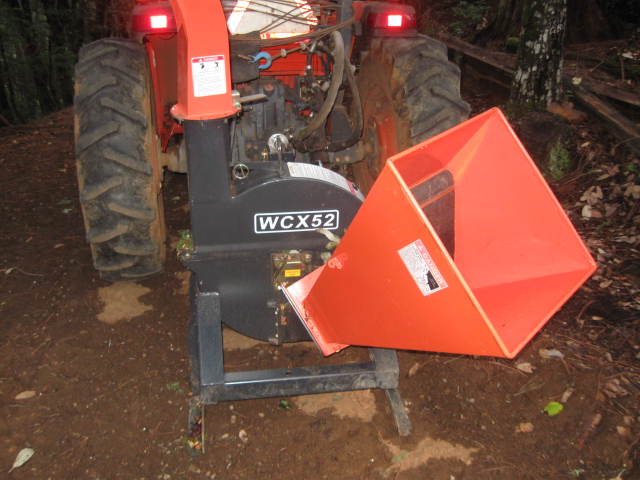 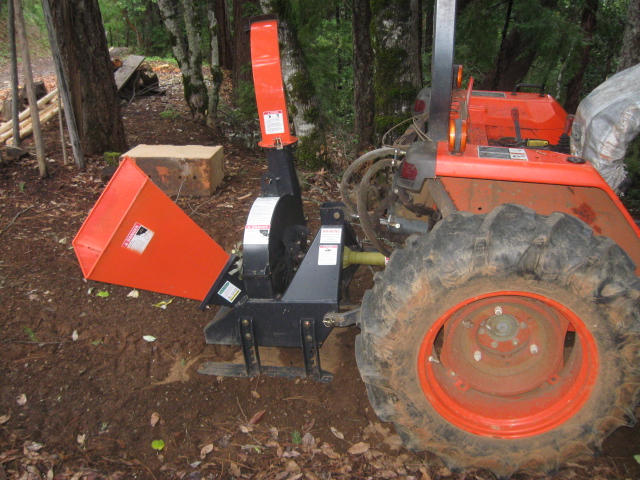 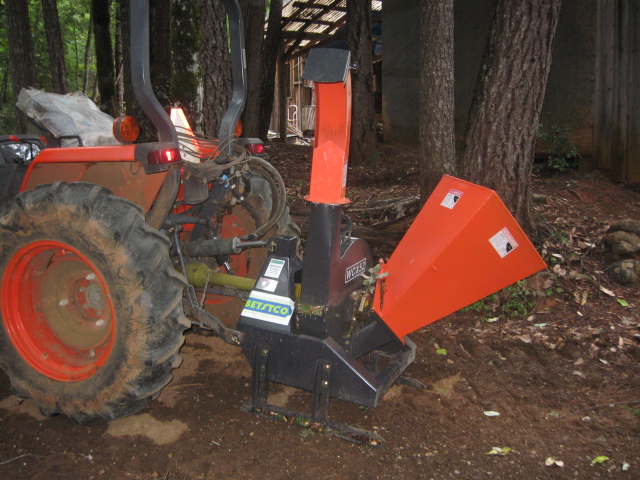