Who has a forest garden?

posted 1 month ago
Hello everyone,

I have converted my small back garden into a mini forest garden and wondered how many people might be doing the same?

Perhaps you’ve got more land and are doing something on a bigger scale?

In either case, I’d love to know more about what you’re doing, how you’re finding it.

In the meantime, here’s a photo of my garden, taken at the end of December. I’ve got very poor soil, so even the oldest tree (11 years old) is still quite small and spindly. However, after years of being in denial about the quality of the soil, I am now working on this issue.

Incidentally, having just won ‘A better world in your backyard’, I’m enjoying the read. One thing that intrigues me is that Paul insists on newspaper not being used under any circumstances. However, I have been doing a fair amount of soil building with the stuff over the last year: thick wadge of newspaper topped with manure and homemade compost. No idea yet what the outcome will be but that soil seriously needs organic matter putting into it!
38B35050-4ED6-48C0-9DF5-5B5EF7DF48B4.jpeg 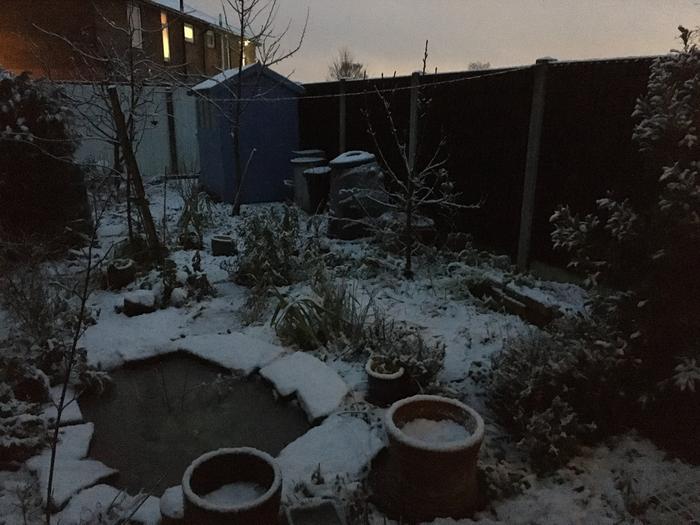 posted 1 month ago
Hi Helen,
As you know my land on Skye is gradually being converted from a sheep field.  I call it a 'productive woodland', since I'm not too sure about planning rules...Planting more shrubbery this year and propagating lots of elder.  In the front garden  I've got some interesting Korean and Chinese woodland plants ( Podophyllum pleianthum,  Sinopodophyllum hexandrum var. chinense) that I'm hoping may be edible (fruit) - they are rather gorgeous anyhow.
I gather Paul is concerned about chemicals that may be in the newspaper/cardboard.  I failed to be scared by the references I found, but as a former chemistry student maybe I'm less sensitive to being nervous of chemicals.  I gather there can be a build up of Aluminium if a very large quantity of newspapers is applied though, glossy papers contain a lot of finishing clays.  Personally I use a fair amount of corrugated cardboard and newspaper to sheet mulch prior to planting.  Partly because I have an easy supply from the shop usually, and partly because I find it very effective against most weeds I have.  I did find in the early years it is possible to put too think a layer round my trees.  We had a dry spell and the little rain we had  did not penetrate very well.

posted 1 month ago
Thanks for your insights into the use of newspaper for mulching. I have heard that the dyes used in newspaper ink are plant based but I don’t know how true this is.

I’ve just seen a blackbird trying to find worms in a spot where I put down newspaper and then covered it with compost. I imagine it was disappointed, as I doubt there would be any worms there yet. In the compost bin, there have often been large numbers of worms in the newspaper, which came as a surprise, considering it hadn’t yet rotted.

Anyway, I hope your Chinese/Korean plantings do well for you. As you know, I don’t have the space for these kinds of experiments.

I hadn’t thought about planning permission - I don’t know a lot about it but I understand that the issue is whether you are putting up a permanent structure, changing the land use from agricultural to domestic?
Nancy Reading
Posts: 143
Location: Eilean a' Cheo
40
I like...

posted 1 month ago
A garden can count as domestic, rather than agricultural.
The bradling worms also really love corrugated card, must be the ready made worm houses!
I'll see if I can dig out a video clip I made in my previous house.....

Nancy Reading wrote:
I'll see if I can dig out a video clip I made in my previous house.....

That would be interesting!
Greg Martin
gardener

posted 1 month ago
Very nice forest garden Helen!  I have one as well and love it.  I still have a long way to go to bring it to where I'm imagining.  You can see pictures on the thread linked in my signature line.  I started out using cardboard, but I've become convinced that it's much better to use wet matting leaves for sheet mulching instead.  While newspaper and cardboard are mostly cellulose fibers, there are usually synthetic polymers added in the manufacturing process to aid in wet strength as well as in the strength of the final paper.  One example is polyacrylamide.  It is considered nontoxic in it's polymer form, though how it and its decomposition products behave in the environment is still being studied.  Meanwhile, tree leaves mat and make a decent barrier for smothering plants and their decomposition product is amazing soil!  To me it's worth leaving the newspaper and cardboard to recycling or burning.

posted 1 month ago
Thank you, Greg, for your compliment on my garden.

When you say ‘signature’, is this your bio?

Where do you get the leaves from for mulching?
Greg Martin
gardener

posted 1 month ago
Just the link that you see under my post that says "Pics of my Forest Garden".

I'm lucky that it's very easy for me to get leaves as I live in an opening in a native forest and I have to move large piles of leaves each fall in order to maintain my small lawn....it gets buried!  Sometimes I also bring home leaves from our transfer station, though generally I have plenty from my lawn.  My leaves are mostly oak and maple so they stick together in lovely mats.

posted 1 month ago
Forest gardens for the WIN!  Helen yours looks  glorious.  The trees being "scraggly" almost has a better sense of proportion than overbearing large trees.  The pond is nice too, how did you create it?

My forest garden is coming into its third year now, I cant imagine 11 years in.  Eating into the lawn each year, I have some experience with cardboard mulch.  My primary goal when I use cardboard is to smother tenacious bindweed/burdock/grass.  I only use brown unbleached cardboard with no glossy finish.  On top I throw any yard waste I have as the year goes on.   It works GREAT as a smothering mulch that allows undreneath it for living critters to make a bustling city of worms and mice and whatnot.  After a full year outside I can rip holes in the, now much more brittle and thin, cardboard to sow seeds.  Its 90% gone by the second spring.

The other soil building and weed control method I use is Daikon Radish.  A 20# sac of seed lasted all year.  For existing lawn, I would turn the sod upside down very sloppily and lumpy with a shovel.  And then sprinkle a thick layer of seeds into the area.  The thick mat of leaves is too fast and tall for the traumatized grass to regrow more than a wispy blade here or there.


Do you have a drawn plan for your layout?  Here is mine.  The purple labeled plants are in the ground right now.  The pencil only plants I have already purchased (bare root), and have decided where they will go.

And the IRL results, the vantage point is upside down and reversed to the plans orientation. :) 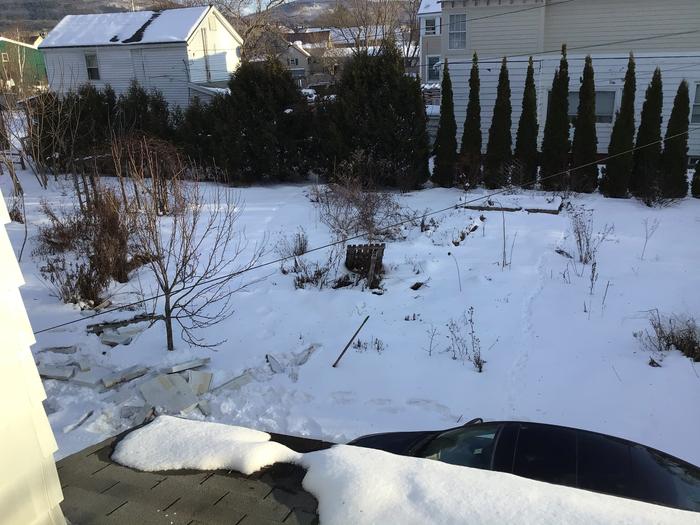 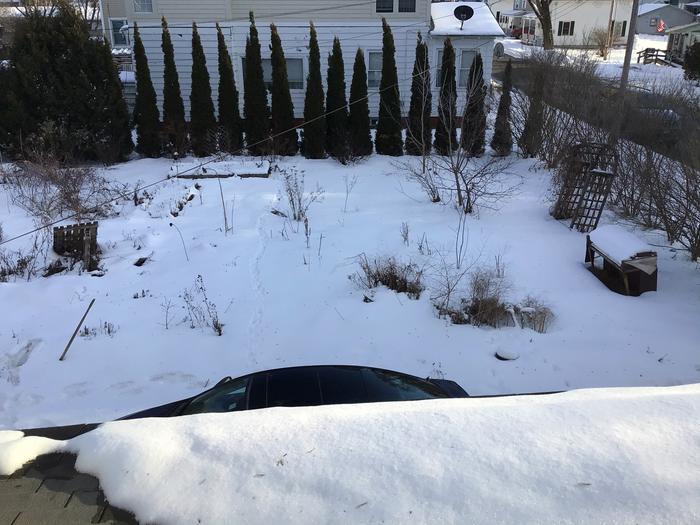 An ending thought on forest gardening . . . . .Patience is the hardest, yet most powerful tool.

Greg Martin wrote:Just the link that you see under my post that says "Pics of my Forest Garden".

Thanks, Greg. Looks like you’ve got a good and interesting range of plants in your forest garden. I’ve not heard of some of them.
Helen Butt
Posts: 129
Location: Leeds, United Kingdom
9
I like...

posted 3 weeks ago
Thanks for showing us the plan and photos of your forest garden, Brian.

I’m glad you like my pond. It was made by simply digging out the soil which I rehoused elsewhere (eg in a raised bed). My dad had spare pond liner and I got the stones for the edging through Freegle (U.K. equivalent to Craigslist).

I did have a plan years ago but my ideas have developed considerably since I drew this up. The structure of the garden is as follows:

Most of the ground cover has been strawberries so far but the wild is coming in or is allowed to remain (eg nettles and dandelions). I’ve also got herbs near the kitchen and around the garden and have my first perennial vegetable: Nine-star broccoli.

posted 3 weeks ago
Hi Helen. I have small gardens front and back (each about 8 x 8 meters). In the front yard I do my best to grow a 'miniature permaculture food forest'. I started it in 2015. At the side where they won't cast shadows on the garden I put a line of different (small) fruit trees. There are different berry bushes too, and several perennials (herbs, rhubarb, a.o.).
Now, since about two weeks, I rent an allotment garden. The former renters already started permaculture in it, so there are trees and bushes and perennials all over. So that will become my second 'small food forest'.

posted 3 weeks ago
Great that you will have all the extra space with your allotment, Inge, and that the previous allotmenteer was even into Permaculture 😊