Justin Koenig
Posts: 49
posted 8 years ago
My grandmother-in-law gave me a fig tree sprout from her own gigantic fig tree at her house. I planted it unaware of where her tree was at her house. It was through observation and finally seeing the mother tree I discovered that it needs some shade, I was wondering if there is a tree or some type of poly-companion remedy to give it the needed shade. I planted it before researching and my discovery of permaculture. Any advice?
tel jetson
steward

Posts: 3605
Location: woodland, washington
147
posted 8 years ago
where are you at? figs certainly don't need any shade where I live.

posted 8 years ago
I'll second what Tel said - my summers are brutal, but so long as my young fig trees get enough water they cope with any amount of sun.

In fact, I've noticed that young fig trees also have a way of dropping their leaves if the ground suddenly gets too dry, then they start up again with fewer leaves so that the water they get is sufficient to 'go round'. Kind of like Sepp's 'shock technique'. It freaked me out the first time it happened, but one of my fig trees has done it two years running now as the temperatures have soared and it hasn't done it any harm. Figs seem to know how to cope with too much sun!

Nick Garbarino
Posts: 239
Location: west central Florida
posted 8 years ago
Here in central Florida, the sun is intense enough that very small fig trees need some mid-day shade, however once the tree is a couple feet tall, they can usually take full sun all day long. Figs have invasive root systems so it's not a good idea to plant them anywhere near septic systems.

Posts: 979
Location: Northern Zone, Costa Rica - 200 to 300 meters Tropical Humid Rainforest
15
posted 8 years ago
Our sun is much more direct than most of you, and our fig trees thrive in the open, and the one near our Mango, does worse. Probably does help to give them a bit of shade when young, but what helps the most is lots of food and mulch.

Our figs bear year round - and the birds love them. Someday I will put nets around them, but for now, I prefer the birds eating the figs.

Justin Koenig
Posts: 49
posted 8 years ago
I live in Southwest Tennessee. I just noticed the original tree was planted on the north side of my grandmother-in-law's house and when I let some plants surrounding my tree start cover the sprout it did better. It was when I chopped the plants around it that it started to sag. So, now I understand the tree is adjusting and probably just needs better water treatment. Thanks for all of your help.
Burra Maluca
Mother Tree

posted 8 years ago
This tree was planted a few weeks ago as part of my bone-sauce experiment. 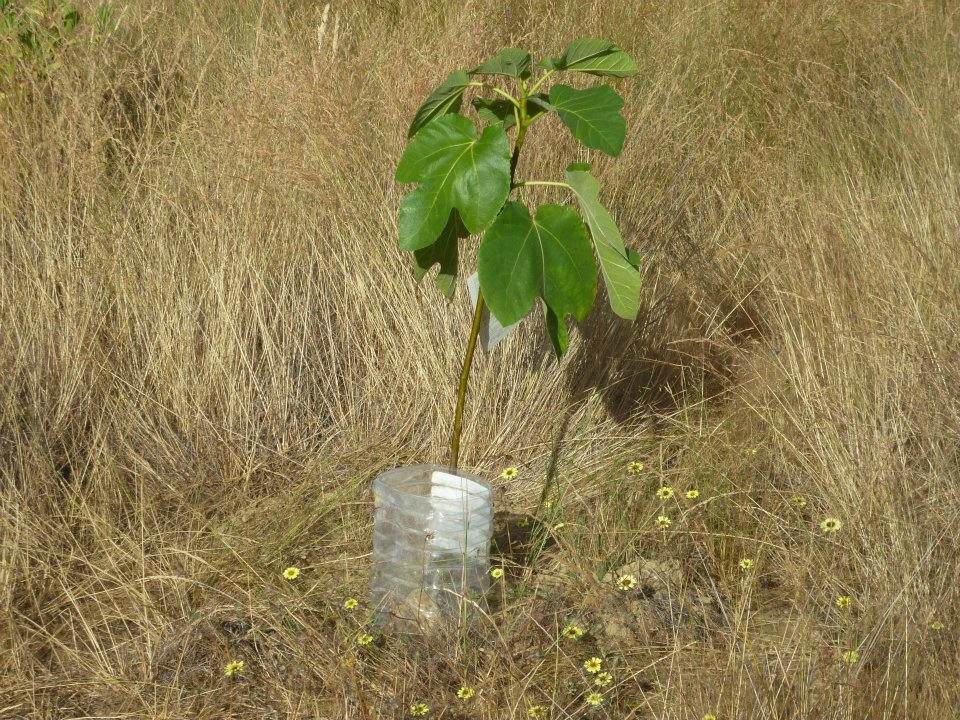 It was bought in a pot, so it had minimal root disturbance. Also, the land down there is not so dry and less shallow than the land higher up so the soil isn't drying out so badly. I water twice a week by filling up that plastic pot thing, which has a large stone inside to stop it blowing away when it's empty, and a couple of small holes in the bottom to let the water drip out slowly.

This tree is on much thinner, poorer, drier soil. It was planted two years ago, and as soon as the weather gets hot and the soil starts to dry out, this happens... 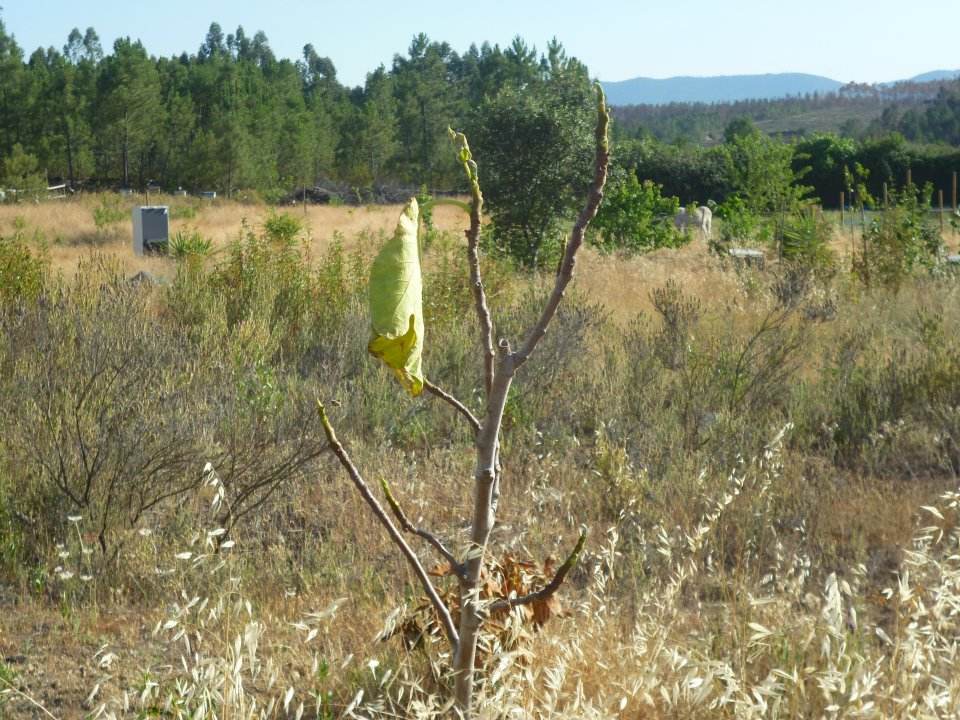 Only the mature leaves fall - the buds keep growing, as though the plant made a decision to re-balance roots and leaves so that the limited water can still supply at least a few leaves.

Also, I have a very tiny fig tree. 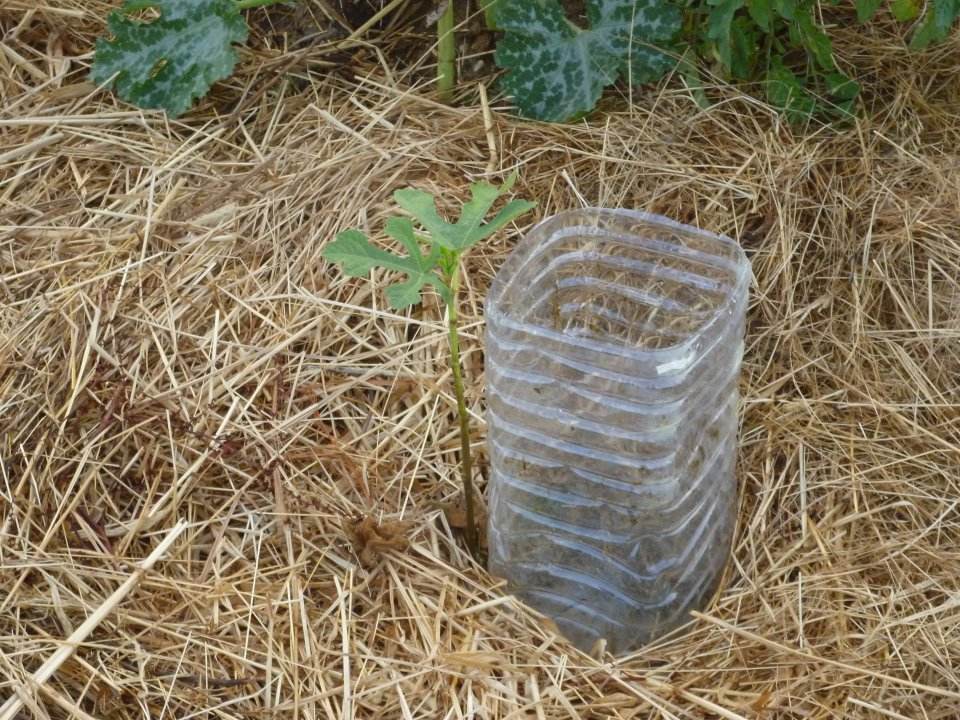 I dug this up from the side of the road. It was a sucker of another fig tree whose roots had crossed under the road and was dismayed to see that there was very little actual root on this little plant as it was nearly totally dependent on 'mom' to supply it with everything it needed. Originally it was very bushy with about eight little shoots coming up, but I thinned them out leaving only one in the hope that it could still take in enough water to keep that one going. It's doing really well now, with no shade at all. We do have to water that one most days to compensate for its crappy root system though. In fact, any time you dig up a plant you are going to damage the roots, so it's very likely to struggle a bit with water supply unless you plant a potted specimen.

Kay Bee
Posts: 471
Location: Jackson County, OR (Zone 7)
1
posted 8 years ago
I have seen some examples of figs growing just fine in quite a bit of shade (less than a couple hours of direct sun). These are established trees. I have no idea how they survived getting started as most figs that I have planted did very poorly unless there was at least 6 hours of direct sun. Maybe the shade was not there at the time of planting. However, the established trees without a lot of direct sun did not produce anywhere near the amount of fruit as my smaller trees that got full day sun. A fig on the south or southwest side of a building or fence (in the northern hemispere) is a happy fig, in my experience. They seem to love as much sun and heat as they can get.

I don't fertilize nearly as much as most sources recommend, either. A bit of nitrogen to help them get started in their early years, but after that, I've never seen any benefit... even in very poor soil.

Mulch does seem to help quite a bit, especially while they are getting established. Wood chips, pine straw, whatever helps regulate the moisture content in the soil.

Cee Ray
Posts: 98
Location: BC Interior, zone 5a
1
posted 8 years ago
figs like lots of Calcium,.. I've heard they will grow right into concrete if given the chance
Dave Miller
pollinator
Posts: 440
Location: Zone 8b: SW Washington
66
I like...

posted 8 years ago
I live in zone 8b (SW Washington state). This winter I bought a fig plant and a couple of scions. There have been no signs of life on them - until last week. A few buds are starting to sprout. I was literally reaching down to yank it out of the ground because it was dead, when I noticed the sprouts. Is it normal for figs to begin sprouting the second week in July? That seems really late.

Of course I am thrilled that they are alive. I am just trying to better understand how figs grow around here, especially from scions.

Posts: 3605
Location: woodland, washington
147
posted 8 years ago
if they were new cuttings that you were rooting, then yeah, that's pretty normal. I had a couple of cuttings sprout just a week or two ago.

that is pretty late for an established plant, though. on the other hand, several small fig plants here broke dormancy this year only to die back to the ground when we had that real late hard frost. they sprouted again a couple of weeks later.

posted 8 years ago
Remember this fella, who lost his leaves two weeks ago when the weather heated up and the soil started to dry out?

Look at him now!

luke ottinger
Posts: 1
posted 8 years ago
Hello all, My first post here. I'm interested in figs, so searching all post for figs. Would like to respond to a couple things that I've read so far on this post. First, figs prefer to grow in full sun and if you live in zone 7 or less should be planted on south side for protection of northernly winds in winter. Also someone mentioned septic system. Second, You should never grow any plants around your septic system for a couple good reasons. One being, you will clog your field with roots and thus back up your system costing lots of money to fix. Two being, you should never grow any edible plants near septic system for health reasons. Plants can uptake and make you sick.

Now with that part said, wondering if anyone has fig cuttings available. If so, please email me, willing to pay shipping plus some for your work. lukeott@comcast.net thanks
chuck patch
Posts: 4
posted 4 years ago

Justin Koenig wrote:My grandmother-in-law gave me a fig tree sprout from her own gigantic fig tree at her house. I planted it unaware of where her tree was at her house. It was through observation and finally seeing the mother tree I discovered that it needs some shade, I was wondering if there is a tree or some type of poly-companion remedy to give it the needed shade.  I planted it before researching and my discovery of permaculture. Any advice?