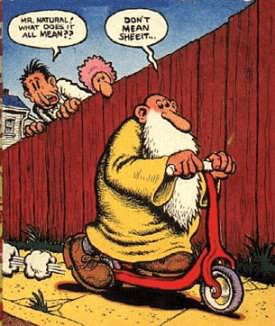 (even though I'm not old enough to be a hippie)

Terry Zwigoff's documentary about friend and pop icon Robert Crumb is astounding. It is one of the finest documentaries about an artist you will encounter. This is a brutally honest journey into a mind and dysfunctional
worthy of doctoral dissertation. Honest,funny,touching,poignant and highly entertaining. The Criterion copy is superb with the usual attention to the best visual and audio available. Deep contrasts,color saturation and image stability-it's all in the Criterion Crumb. Great price on dot com. Love it!

Doing is Secondary to Being

Rick Roman
pollinator
Posts: 442
Location: Pennsylvania Pocono Mt Neutral-Acidic Elv1024ft AYR41in Zone 5b
27
posted 7 years ago
Tyler and Michael, I too have an original poster of Twas Ever Thus hanging over my desk. It's one of my prized possessions.

The "Crumb" documentary is excellent, wow what a film!

I was lucky to be introdued to many of the underground 60s and 70s artist at the infamous Psychedelic Solutions Art Gallery in NYC the curator is a good friend, so I got to rub elbows with the some of the greats like R. Crumb. Here is a link to some of the PS gallery images. Peace Rick

Jorja Hernandez
Posts: 78
1
posted 7 years ago
And The Fabulous Furry Freak Brothers, Fat Freddy's Cat, Rudy the Dyke - thanks for the flash-back.

(Still kicking myself for not saving all my original Zap Comics which would be worth some serious coin today - sheeit!)
Jorja Hernandez
Posts: 78
1
posted 7 years ago
Well, lookie what I found:

Michael Forest
Posts: 81
9
posted 7 years ago
I've always had a fondness for this one:

Rick, do you by chance remember the Air Pirates?

Doing is Secondary to Being

Rick Roman
pollinator
Posts: 442
Location: Pennsylvania Pocono Mt Neutral-Acidic Elv1024ft AYR41in Zone 5b
27
posted 7 years ago
I have a lot of love and respect for the Air Pirates..... High Art (no pun intended). I've often dreamt of being part of the SF, Haight Ashberry, Berkeley community during the late 60's, alas I was too young. I think we are entering a similar time of social, political and economic evolution in "this decade" of activism and protest. I got a taste of it at Zuccatti park with the Occupy movement. The popularity of permaculture and intentional communities also testifies to that. Let's not forget legalization of MaryJane in CO and WA. It's a very exciting time to be alive people.... Engage and Relish! Peace.


i remember the handouts we used to get in school weren't about invaders, but invasives....

One of the coolest and original art exhibits I attended at the Psychedelic Solution Art Gallery in NYC was the Blotter Acid Art Exhibits. They curated amazing images drawn / printed on blotter acid.

Posts: 1748
Location: Western Kentucky-Climate Unpredictable Zone 6b
106
posted 7 years ago
I do seem to remember a leafleting campaign from the days of my youth. Subversives had distributed 1/4 inch pieces of paper with Mr Natural images imprinted on them. We were told to spread the word around. If caught with this leaflet you could swallow them and keep them from getting into the wrong hands. I remember the message as profound , although a self-limiting prophecy.