Kirk Hutchison
Posts: 418
Location: Eugene, OR
posted 12 years ago
Recently we had a big wildfire in the Angeles National Forest. The Forest service is partnering with an organization called Tree People to reforest the area. They are currently growing large numbers of pine seedlings for planting next year.
I feel that pine trees haven't been working that well, and we should try something else - the forest should be able to bounce back from wildfires on its own instead of becoming barren and eroded afterwards. I propose that a mixture of the finest edible drought tolerant trees and shrubs be planted. The place could become a gigantic forest garden, which would also greatly benefit wildlife. Thoughts on the quality of the idea & suggestions for species to be planted? (I like mulberry trees, which spread on their own via bird droppings, are drought tolerant, and have deliciously edible fruit)
Matt Ferrall
Posts: 559
Location: Western WA,usda zone 6/7,80inches of rain,250feet elevation
6
posted 12 years ago
excellent idea.Most scientificaly based programs stick to the stated goal so if its salmon habitat and the deer or beaver might eat it than gov.paid reforestation progects will avoid planting it.So you end up with a bunch of useless poisoness plants but since no creatures will eat them,they will grow up quicker and shade the stream for the fish.Many restoration and forestry projects are like this.Some times Ill come in later on my own time and put some edibles in or kill some of the less usefull but agressive plants that I know will dominate that the others may thrive.

Kirk Hutchison
Posts: 418
Location: Eugene, OR
posted 12 years ago
My plan is to start a bunch of mulberry seedlings which I will then plant, leaving the birds to continue from there (they love the fruit).
Jordan Lowery
pollinator
Posts: 1528
Location: zone 7
18
posted 12 years ago
i would consider sticking with native plants that already grow there. no need to introduce foreign species. but still keep the diversity as high as possible.

Aljaz Plankl
Posts: 386
14
posted 12 years ago
Same here! I would go for native woodland trees (lots of edibles etc among them) and then after a year or so introduce some other edible trees etc...
Kirk Hutchison
Posts: 418
Location: Eugene, OR
posted 12 years ago

Plankl wrote:
Same here! I would go for native woodland trees (lots of edibles etc among them) and then after a year or so introduce some other edible trees etc...

Not so much in this forest. I'm not entirely sure what is 'native' at this point - it has all burned down and been replanted several times. The native shrubs, herbs, etc. take care of themselves. I am mostly thinking of trees. The non-natives are simply better than tons and tons of pines.

Aljaz Plankl
Posts: 386
14
posted 12 years ago
Just take a look around.  I'm sure you can find some diverse forests and see the trees that grow in it.
Dave Miller
pollinator
Posts: 447
Location: Zone 8b: SW Washington
72
I like...

posted 12 years ago
The California Native Plant Society knows California native plants and should be able to point you in the right direction:

Matt Ferrall
Posts: 559
Location: Western WA,usda zone 6/7,80inches of rain,250feet elevation
6
posted 12 years ago
Its important to grow what grows good on the spot.Invasives can also do great!I like to manage for usefull plants.I kill lots of natives in reforestation projects that were of little value to native people.The native plant community dispersion/ diversity is vastly diferent then when managed by natives. Natives are great if you want to live like one but if you are getting your resourses from somewhere else in order to reforest with natives.?,Im not to sure how ecological that is?

Kirk Hutchison
Posts: 418
Location: Eugene, OR
posted 12 years ago
My philosophy is that 'native' is a very opinionated term. Take redwoods, for example. They once grew throughout the world, but have been reduced to the west coast of North America and a small grove in China over time (due to climate). Is it wrong to plant redwoods in England?
I feel that natives should be preferred, BUT if non-natives are introduced carefully, they may be of great benefit to the system. After all, the majority of the terribly invasive plant species only thrive on earth recently disturbed by humans. Over time, the natural cycle re-balances and equilibrium is restored. Take wild mustard, for example - it grows wild wherever the Spanish explorers walked, but yet is not a major problem as an invasive plant. It has naturalized, and is food for wildlife and beloved by bees. Also, in some areas the best natives have already been destroyed, such as the eastern chestnuts. It is not a bad thing to replace these with similar species. For example, vast pine forests of one or two species are found only in the national forests. In the last truly natural forests in my area (overlooked bits of public land) you find a mixture of live oak, pine, etc.
As a finishing touch - Sepp Holzer does not support "native" pine monocultures. He cuts them down when possible to make hugelkultur and plants other forest trees and fruit trees instead.
Jordan Lowery
pollinator
Posts: 1528
Location: zone 7
18
posted 12 years ago
what elevation are you talking about reforesting kirk.

Kirk Hutchison wrote:I'm not entirely sure what is 'native' at this point - it has all burned down and been replanted several times.

Certainly. And most of those were probably centuries ago!

Your goal might not be a landscape as it was before human habitation (you might need some mastodons and new-world species of horse to accomplish that, and they're as rare as hens' teeth these days) but something that resembles the vegetation under pre-Columbian management systems.

There's a great plaque in Yosemite that shows how vegetation grew with frequent controlled burns, via a very early drawing of the valley. I bet there are good studies of how your region was managed, also, that will give you some good ideas.

Brenda Groth
pollinator
Posts: 4437
Location: North Central Michigan
29
posted 12 years ago
have you made that suggestion to the officials in charge? Pines are fast burners and they aren't going to feed you..so your idea ..although great..would also likely be very expensive..i would like to see that done though..

Kirk Hutchison
Posts: 418
Location: Eugene, OR
posted 12 years ago
I'll do that. Also, I don't think it would be any more expensive than reforesting with pines.
Brenda Groth
pollinator
Posts: 4437
Location: North Central Michigan
29
posted 12 years ago
please continue to post to this thread so we can see what reforesting you do..here on our property i have done both..i have a lot of pines i'll admit as they are fast growers and keep their needles for winter protection..but i've also got a LOT of deciduous forest and have been putting more and more and more into nut and fruit trees..as i also feel that is the way to go..each year i buy as many fruit trees as i can afford..last year it was a lot of baby nut trees..and all but one lived..

Kirk Hutchison
Posts: 418
Location: Eugene, OR
posted 12 years ago
Will do. Here are some pictures of my mulberry tree. You can see the fruit ripening. I will grow the trees for reforestation from seed.
IMG_1990.JPG 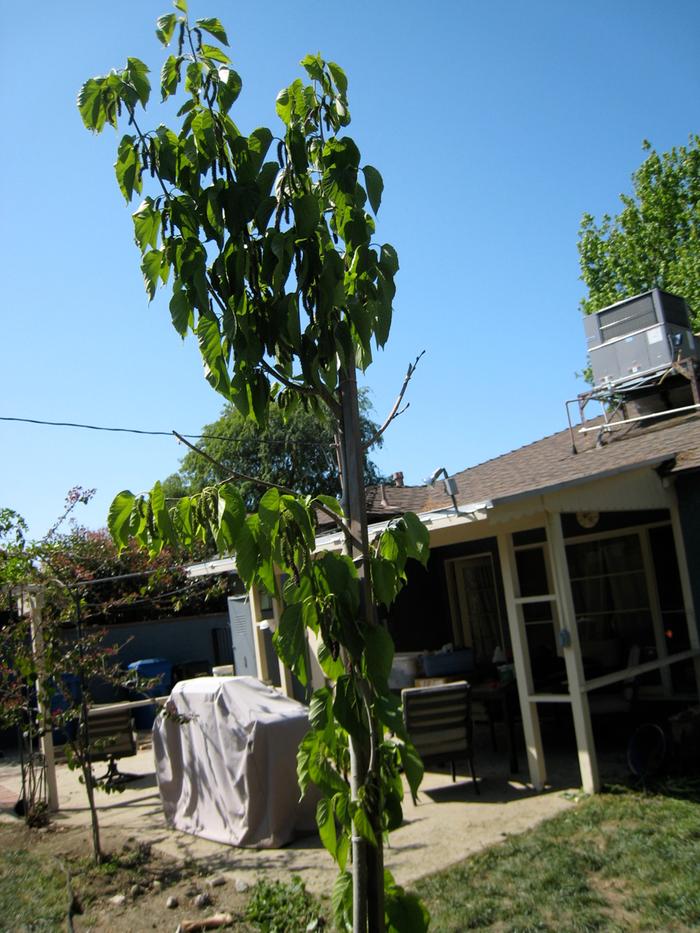 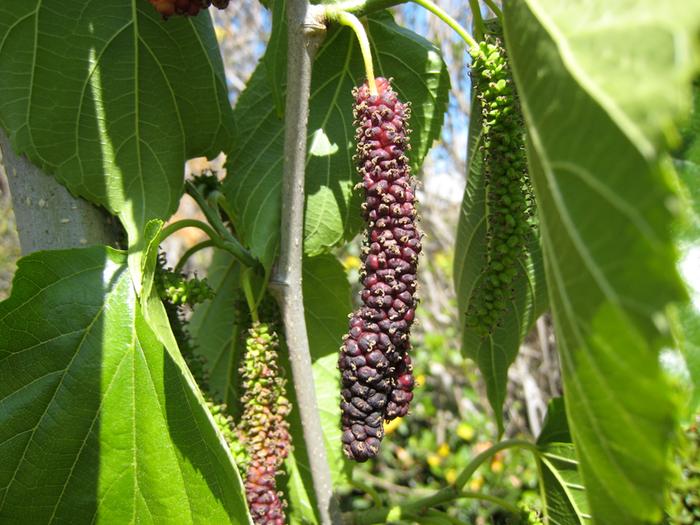 Jordan Lowery
pollinator
Posts: 1528
Location: zone 7
18
posted 12 years ago
what kind of mulberry is that?

Kirk Hutchison
Posts: 418
Location: Eugene, OR
posted 12 years ago
White, I think. According to my research, white mulberries ripen in spring and can have white, red, or dark purple berries. This fits the bill. The label called it 'Pakistan Fruiting'.
Brenda Groth
pollinator
Posts: 4437
Location: North Central Michigan
29
posted 12 years ago
cool, i've never seen them like that..i ordered mulberry trees twice last year and both times they substituted wild plum..even though i said no substitutions..so now i have 4 wild plum and no mulberries.


This 2 day workshop at Emerald Earth will be taught by Dennis Martinez, a specialist in ecocultural restoration. He will focus on how the land looked when the indigenous Indian people were burning these mountains and valleys on a regular basis, and how this positively affected the integrity and health of the North coast ecosystems while providing a rich bounty for its peoples. Dennis will relate this ecologically healthier and fire-proof past with the degradation that has occurred since Indians were removed from their landcare roles, and share ideas on how to restore a semblance of the past while adapting to current environmental conditions. Fire as a restoration tool will be discussed, as well as how to deal with water loss, fire hazard, diseases like SODS, and the names and uses of native plants. ...

I'm headed to EE for my work-trade season, so hopefully I'll get to participate in this workshop a bit. It sounds really useful to me. It's NoCal, though, so I'm not sure how much it applies.

Brenda Groth
pollinator
Posts: 4437
Location: North Central Michigan
29
posted 12 years ago
what nursery do i order from..i can tell you..not that one again that is for sure.

i have read up on the wild plums and they do have some interesting appeal though..so i'm not disappointed that i have them..but did want to try the mulberry..maybe someone could send me some seed, i do understand they grow well from seed..but i've tried buying seedlings or small trees several times only to be told that the crop failed..so i have given up on the trees themselves..if anyone has any small mulberry seedlings i'd be happy to pay shipping to get some ..

Posts: 175
posted 12 years ago
I think everyone who lives within a fire regeme area should find out about fire ecology.

Its not weather the plants are "native" or not -- its weather they work within the local ecology and certain native plants are going to be adapted to that ecology.

There is a group (at least one - probably many) studying the reforestation problem in Orange County.

There is information about home reforestation and supporting wildlife habitats here:


Information for Home Owners Regarding Restoration and Structure Protection
After the Fires
Below are two weblinks with various information for home owners who need help with restoration and structure protection after a wildfire (preventing mudflows, erosion control, debri flows).

Here's the NRCS link from above:

If you have time you could learn about reforestation and wildlife habitat reconstruction by volunteering at one or more of these organizations.
Kirk Hutchison
Posts: 418
Location: Eugene, OR
posted 12 years ago
Brenda - I will have some seedlings ready by next fall/winter. Contact me then and I will mail you one.