Posts: 3661
Location: woodland, washington
166
posted 8 years ago
flowering here near Portland, OR. male flowers showed up in March, females while I was out of town sometime in March or early April.

posted 8 years ago
Thanks, its very interesting to know how Seabuckthorn is behaving in different parts of the United States. The blossoming of the male seemed to coincide with forsythia and PJM rhododendron flowers.

posted 8 years ago
Our sea buckthorn (Hippophae rhamnoides) is not green like that, it's very silver. It's native here and I'd call it rampant, for sure. When our campus was started some 18 years ago, the guys planted a wide variety of native edibles, and really the seabuckthorn is the one thing that took off rampantly. (Oh and the Lepidium latifolium, which is delicious this time of year, with simple processing).

The sea buckthorn is a seriously harsh thorn to deal with. It used to go right through my sandal soles, but I think it's taught me to tread more carefully because that doesn't happen so often anymore. I've been trying to pull it out from areas where it's a problem, like blocking irrigation channels or crowding into the playing field. In my experience, pulling it seriously with a pick, you can get a good amount of root and some runners (though our soil is sandy with few other roots to interfere so it's easier perhaps). But it does sprout back from bits of root, so I have to keep going back to the areas, but the regrowth is small.

BTW, we harvest it by laying tarps underneath and whacking it with a stick, so we don't have to get in among the thorns. A nice way to have juice is to simply dry the berries, and then when you want juice, soak them a few hours, run through the blender with some sugar water, and dilute with water to taste. Since it ripens in September and we mostly want to drink juice in June-July-August, drying works fine for us. This reconstituted juice looks and tastes just like the fresh. Personally I don't think it has much flavor except sour-bitter, but a lot of people here like it. 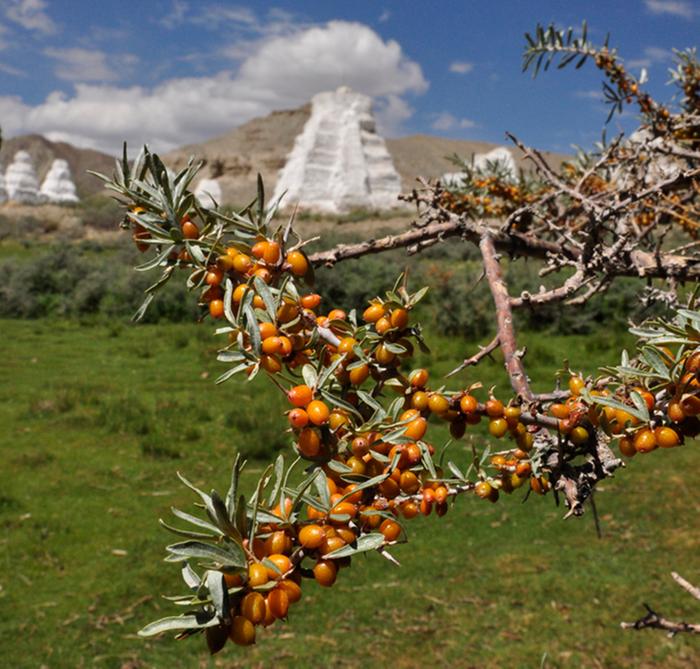 posted 8 years ago
Rebecca, thanks for sharing your experiences with sea buckthorn (Hippophae rhamnoides). I haven't heard of that method of harvesting. Sounds very practical. My plants have blossomed with female flowers. Very exciting for me.
The plants do become more silvery in color as the leaves mature. 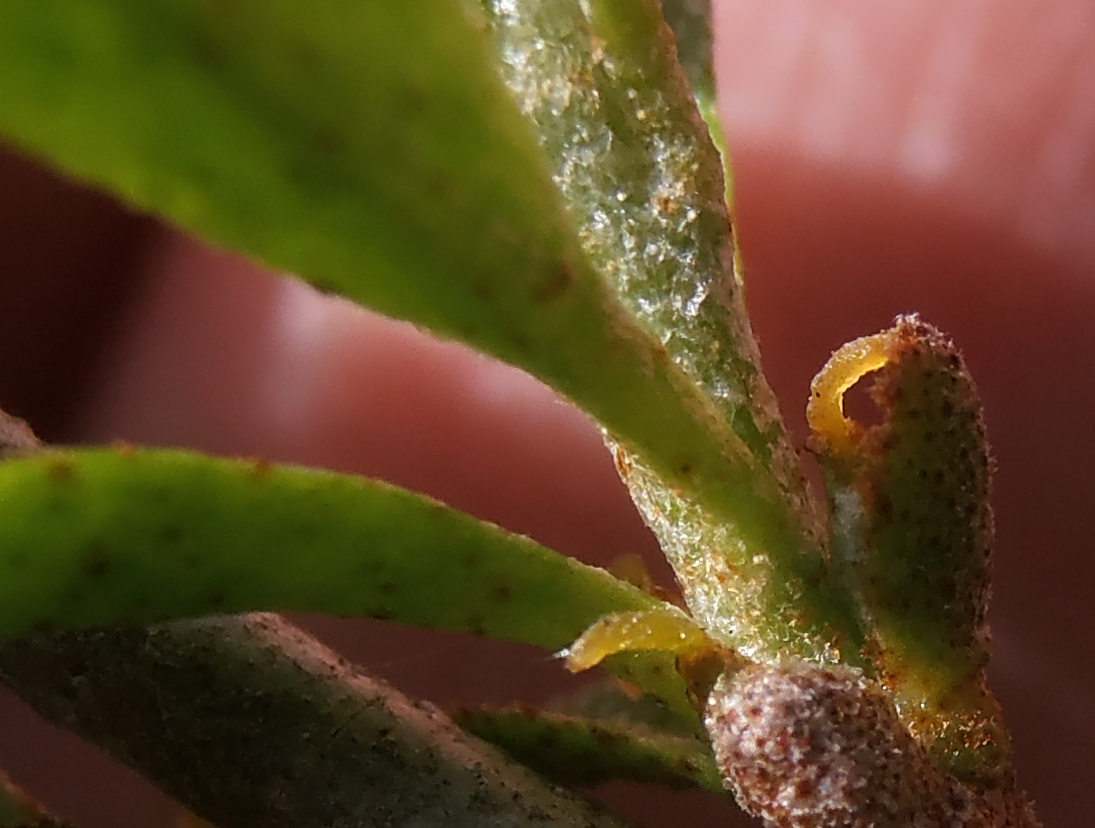 posted 8 years ago
Seaberries after having laid an old curtain under the bushes and whacking the bushes. (Sorry, I don't have a picture of whacking)

Tradition here in Ladakh says that the berries drop off better if you do it in the early morning before the direct sun hits them.

For storage, we pick out most of the sticks and leaves and then lay them out to dry in the sun (We don't need a dryer in this desert). Make sure they dry quickly and not too hot -- they are vulnerable to scorching or fermenting, presumably because of natural sugars in them, though they don't taste sweet at ALL. Then, as much as a year later, when we want juice we soak them overnight, then either squeeze and mash in a sieve, run through a mouli mill (best option), or run them through the blender (can give ground up seeds). Add some sugar and lots of water.
Collecting-seabuckthorn-Ladakh.jpg

Pamela Melcher
Posts: 299
Location: Portland, Oregon Maritime, temperate, zone 7-8.
1
posted 7 years ago
In Portland, Oregon, in our community garden, there are seaberries which are very productive.

Several females surround the male, and the trees are planted about 3-4 feet apart, some to the East of the male, some to the West. Winds here usually come from the West or the East. They are in full sun and receive very little water in summer. They are about 10 feet tall. Perhaps they are a little too close together, but they are healthy and productive.

They were planted about 13 years ago. We started at the garden in 2004, but I paid little attention to them for years, and do not know when they began bearing fruit. They are in a remote corner of the garden and I did not understand their significance until recently. I noticed a lot of fruit on them in 2008. They bear LOTS if fruit now.

I do not know which varieties they are.

One Green World does specify which varieties do well in Oregon. Some varieties are best suited to very cold climates and will not do well here.

They produce suckers that begin to grow about 3-4 feet from the parent plant.

Good luck with your Seaberries!.

Pamela Melcher
Happiness, Health, Peace and Abundance for All.

Patrick Mann
Posts: 310
Location: Seattle, WA, USA
6
posted 7 years ago
I finally had the first berries this year, on 2 different plants (in Seattle). Interestingly, one of the plants was 5 years old, the other only 2. So it doesn't have to take a long time until they start bearing. Unfortunately, I can't tell you whether it was the cultivar or the location that made the difference.

They are invasive in two ways. Plants from seed pop up all over the place. The males also send out very long roots just under the surface and sprout whole forests of new plants. We have them popping up more than 30 feet away from the main plant. Regular mowing is required to keep this from becoming a problem.

Pamela Melcher
Posts: 299
Location: Portland, Oregon Maritime, temperate, zone 7-8.
1
posted 7 years ago
Is it only the males which send out runners and form new trees?

I have dug up some of these new plants from around a grove of seaberries in our community garden and do not know if they are male or female. I would like to know in order to plan placement effectively.

They are nitrogen fixers. so from my point of view, that trait is a plus.

Pamela Melcher
Happiness, Health, Peace and Abundance for All.

Pamela Melcher wrote:Is it only the males which send out runners and form new trees?

I imagine it is not exclusive to the males, but every one I have dug up has led back to the male plants, so I think it is a strong majority.
Randy Grant Heacox
Posts: 10
posted 6 years ago

hey does anyone know what variety of sea buckthorn is tastiest? or what are your favorites? I see alot of comments from people who bought some plants a few years ago... what are your results?

Charles Kelm
Posts: 173
Location: Western Washington (Zone 7B - temperate maritime)
2
posted 6 years ago
If I were going to buy some plants right now, I would buy them from Ben Falk. http://seaberry-hippophaerhamnoides.blogspot.com/p/seaberry-plants-for-sale.html

posted 6 years ago
I don't think that link is to Ben Falk.


You are right Cj. The link is to my blog about Sea Buckthorn and permaculture. Currently there are Sea Buckthorn plants ready to ship now by using this link on the blog. http://seaberry-hippophaerhamnoides.blogspot.com/p/seaberry-plants-for-sale.html The coupon code shipnow takes 10% off of the order and there are 59 plants available for immediate shipping. In late March into April we will have many more and other types of plants as well. http://www.jiovi.com/plants.html Some of the other plants are
We have some other things which may be interesting too. The facebook page is https://www.facebook.com/pages/Foxgreen-Farms-LLC/238453147394

There is a new Native American seed sample sized collection which will be fun to try. I am looking forward to it very much.

This summer we will be working on a permaculture retreat/educational effort for the benefit of Veterans, especially those who would appreciate a wilderness farm experience with their peers to help smooth out the transition from war back to daily life. Craig and I have a strong interest in this are since we are retired from years of experience with National Security.

So we would very much like to invite you all to visit the blog, like us on facebook and browse the www.jiovi.com website. We will need some infrastructure improvements to accommodate the Vetran's Retreat visitors better and along with any sale benefits, we will be hoping a crowdfunding attempt will be successful.

posted 6 years ago
Tom, you might want to start a thread in this forum with your plants for sale and coupon code.

Yeah, he's sold out for this year, but expects lots more next year.