Help understanding this Smokeless stove design out of Ghana.

chase canadé
Posts: 37
posted 7 years ago
Hi,
I stumbled into this photo page of an ad or kick start I guess you'd call it while searching the web for smokeless stove designs.

Help Over 50 Ghanaian Women run a small business on a site called GlobalGiving.org.

I'm curious about the stoves they built and the design/construction.
They say they are smokeless. I wasn't to say they are some kind of rocket stove with a surrounding mass that stores heat, but the flames in the fire box aren't quite acting like they would in a rocket stove. The flames look like they are going up towards the pot not rocketing back towards the exhaust stack.

Not being a stove expert, I'm hoping you guys could enlighten me about these stoves.

Here are the pics available of the build and of them working. Smokeless stoves ready for use. As you can see one exhaust stack is behind the first two fires while another one is behind the third fire. All exhaust stacks seem to be the same size... Not understanding how they are working whether a single fire box or two. And how are they smokeless?

posted 7 years ago
Chase Canade` : Actually these are bastardized attempts to make from local materials a copy of the much superior and all metal Aprovecho Research Centers

A comparison between the two starts out with the fact that the pots already available would not work well with the Aprovecho Institutional Stoves. Build an all new
stove yes, throw out the existing cooking pots - ain't never going to happen !

To understand where Aprovecho is coming from you have to understand that 40% of all the people in the world are using 3-r0ck fire as their only source of heat,
cooking, Dig into the material in this thread :

The whole 3-rock thing was what brought me to Permies.com way back when ! For the Crafts ! Big AL

Late note the Aprovecho Cook stoves really are smokeless, I doubt that over 5 women are involved in this process, and question who this Institutional cooking is
being done for, and would you let your children be fed out of those dirty dirty Pots ! A.L.

The chimney causes the draw to bring more air in. The open top make direct transfer to the pot. No different than a wood cookstove if you take the plate off and put the pan over the top.

posted 7 years ago
Bill McGee : If it had been anything but a cob'd-together Frankin-clone I might have said something positive, this is not Appropriate Technology, and

it is not something to be supported by cloud sourced donations. IMHO I support many groups working with Rocket stoves to improve local conditions

This nether supports or protects the local people, economies, or the Ecology ! Big AL

chase canadé
Posts: 37
posted 7 years ago
@ Big Al,
Thanks for the reply and links.
Additional info on the project in Ghana is here.

Just for the fyi, they weren't asking for funding for the stoves but rather for help with their milling machine. Funding is over but you can read about at the above link if interested.

My interest was in the stoves which by the looks of the ones they were using (see pic below) the new ones are a vast improvement.

Pre Smokeless Stoves in use I haven't been to Ghana so I can't speak about life or living conditions there.
Nor do I know who uses Palm Kernel Oil or what it's used for, or who they're producing it for. From what little I read about the project they don't make much money either way.

My interest is in the stove design since it seems to use materials at hand and interestingly enough, uses a mass to collect, store and help heat the pot. Ann RMH does something similar by storing heat hence heating the room over a longer period of time than just when the fire is burning.

I look at the ones pictured in Ghana and look at "modern" stoves with chimneys coming out the back and a cooking surface in the front and don't understand how those in Ghana are smokeless while those built in the modern world are not. 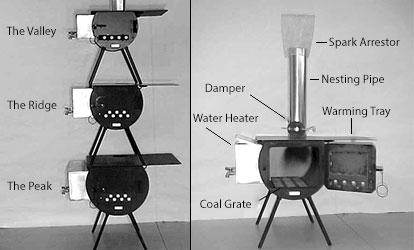 Additionally, the "cob" used to make the stoves in Ghana seems to be made of clay. Much of the land in the South Eastern USA is full of red clay. So something similar and much smaller could easily be built on the fly.

A flat plate inserted in the stead when a pot is not needed. And suited heat in the "cob" if you will, used to warm the hands or bread even after the fire has died out. (In theory anyway)

Given the two types of stoves, camping and Ghana or even those show by R. Scott's link which all draw air in the front, with an exit out and up the rear. How is it in the design that the Ghana and R. Scott's link stoves are smokeless while the camp/tent stove or even a pot belt stove is not?

Is the smoke being caught somewhere and a reburn happening? Is it because it's exit /chimney is insulated via the cob?

Wouldn't two fires in theory choke the single chimney causing smoke? Apparently not... there seems to be no difference whether there is a single fire or double the fire. So what is it about these designs that allows this and makes them smokeless over the standard stove design?

That's what I'm trying to understand, and am not at this point.

Could a simple change in design make the camp tent stove smokeless, like the one shown for example?

@ R. Scott, thanks for that link, it looks just like a modern version of the diy stoves in Ghana. With the exception that the pot sits down in the stove slightly. Maybe they'll have a picture of the design or a cut away image showing the insides and exhaust position in relation to the fire etc.

Posts: 3793
Location: Upstate NY, zone 5
315
4
posted 7 years ago
I would guess that "smokeless" is a relative term compared to the kind of nasty monsters they were used to. I am sure these are not nearly as efficient or clean as rocket stoves would be, but also sure that they are a great leap for their community.
Erik Weaver
Posts: 219
Location: S.W. Missouri, Zone 6B
8
posted 7 years ago
My impression is favorable.

Consider why is the rocket stove "smokeless"??

Answer: High heat. Basically once you get over 1400 F you start burning most the smoke. A good J-style rocket stove, like we talk about here quite often, ought to pretty consistently be burning in excess of 1600 F. Several hundred degrees beyond what is required to burn the smoke. And temperatures can rise in excess of 2000 F. In ideal conditions wood can burn at something close to 3400 F.

Why do rocket stoves burn so hot?

Answer: Fire brick can survive the high temperatures and the rapid rise in temperature. They are insulated to keep the temperature high. Why? To keep the fire hot enough to burn the smoke and other gases.

So to answer your question, I would say these are basically following the rocket stove design. You have in this case an L-type configuration instead of a J-style, but that just describes the feed tube. The most popular design around here is the J, with the vertical feed tube. But they can be built with a horizontal feed tube, in which case the feed tube and burn chamber are all the same unit. This is kind of what is shown in the pictures. It appears the burn chamber is of a larger volume than we typically use, and adding the pot on top is clearly different, but they are using it as a stove, not a heating device.

It would get hotter in their pot if the pot were in the chimney (fire riser). But how would one do that? Those are really big pots!

Maybe you would do like the Wisner's did in the Turkey Frier Challenge, or whatever it was called. I think that thread is somewhere on here, but maybe I saw it elsewhere. Basically they wanted to find out which device would boil water faster, a turkey frier or a rocket stove. The rocket won. The build a basic rocket stove, but the fire riser was modified to accept the pot, and then a skirt was added, just a tad larger diameter than the pot, to help keep the hot air rising along the sides of the pot.

That might be a workable adaptation to the pics. But all in all, what they have built seems to be working. They are getting the heat they need, and they are burning hot enough to burn the smoke, and we might presume the other gases as well.

Sounds like a very workable solution to their problem. And it almost certainly also burns less wood. Another important consideration when you have to carry the wood to your fire!

I'd give them a thumbs up!

Is it exactly a rocket stove. I guess not. But they are using a number of the basic themes we use in a rocket stove. Primarily the horizontal feed and burn chamber, with a significantly tall chimney, which keeps a strong draft. And apparently the clay or cob they are using is sufficiently insulating to maintain high enough temperatures to burn the smoke.

chase canadé
Posts: 37
posted 7 years ago
Thanks for that explanation Erik.

I did find out more about these stoves. Not much, but a little.

They are called or being referred to as "Morrison Smokeless Stove" by Albert Morrison.

You can read more about the project at the DQF blog who partnered with Albert Morrison to build these stoves at no charge along with CHF International. And he built 20 of them for this community. I'll just post this snippet from the blog post.


"Morrison’s Fuel efficient stove is gradually finding increasing support in the slum communities of Kwesimintsim and Kojokrom especially among the palm kernel extractors and other food vendors such as pito brewers and Fante kenkey makers."

Though after reading the above blog post, I'm not sure they are totally smokeless or not as the above writer stated, "The smoke which affected their eyes now passes through the chimney."

I may write to them to find out more about the construction and design.

I still like the thought of the thick wall used in the Morrison Smokeless Stove design. I have to think it would aid in heat transfer while cooking, and possible storage for when the fire dies down or goes out.

In my searching for more about these Morrison stoves, I have stumbled into some pretty neat looking stoves being built for communities that primarily use wood for cooking and heating. Mostly in other countries.

All are designed to be more fuel efficient, some smokeless, some not. Some design factors I really like, and will come in handy for a base camp stove for cooking and heating.

Thanks again for the replies.