Terry Paul Calhoun
Posts: 40
Location: Ann Arbor, Michigan
3
posted 7 years ago
Would an 8" wide x 24" deep ditch, dug on contour by a trencher which deposits the soil downhill, produce a useful swale? It looks physically feasible, in fact relatively easy with rentals that aren't all that expensive locally.

Here's some background. A pic of the entire piece is attached. The southern 3/5, where I want to put swales and berms, is 900' x 650' rectangle, with the long sides having a north to south orientation. It also drops 26' in elevation (2.8 slope) from the north to the south. (Great sun!) Most of the swales will be on land that was farmed until about 15 years ago, with two overgrown north to south tree lines to cut through, each of which has seasonal water draining in it most of the year. I have a mile of swale planned to run across it east to west on contour.

Above this piece is the rest of our land, which is about 400' x 560' and relatively flat. Water from an additional 20 or so acres of mostly farmland comes into the north end via an under-road culvert. So, water from about 30 acres of land to the north runs down this property in various ways at different times of the year and during different weather. Spread that water out and the entire piece will be a tree-growing paradise.

Thanks in advance. I am going to have a lot more questions. 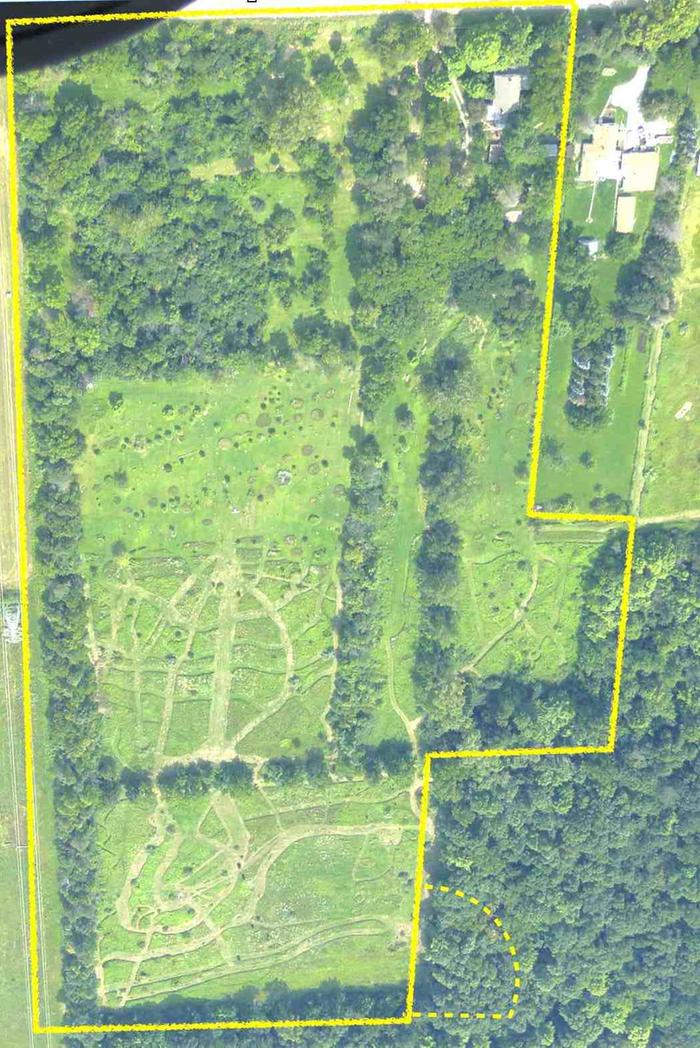 posted 7 years ago
I must admit I find a trencher to be a pretty easy way to do a trench. They are pretty narrow usually though. I guess for my purposes a trench would be a risk to ankles and legs and thus not useable.

Roy Hinkley
pollinator
Posts: 350
Location: S. Ontario Canada
27
posted 7 years ago
The hard part about digging by hand is the first 4" of roots and such. I think a trencher would do a great job. Eventually the sides are going to cave in and you'll end up with a shallower , wider trench. You might want to push your pile of soil a bit farther downslope so it doesn't fall back in as the sides settle.
Morgan Louis
Posts: 33
Location: USDA zone 8b
1
posted 7 years ago
I'm not familiar with trenchers. Would you be able to make multiple passes to extend the trench another 8 inches with each pass?
Terry Paul Calhoun
Posts: 40
Location: Ann Arbor, Michigan
3
posted 7 years ago
I am having trouble linking or embedding this one-minute video of a machine digging a 6" x 18" trench. The literature is full of mentions of second passes for additional width.

Considering the soak and sink aspects of swales, I am inclined to think a ratio where width is greater than depth is preferable.

And if the area will see foot traffic by human or livestock, wider makes it safer.

Rob Browne
Posts: 65
Location: Blue Mountains, NSW, Australia
posted 7 years ago
If you can hire a backhoe then this will give you a great trench with a curved bottom and no ankle breakers.

posted 7 years ago
A trencher can work for swales but you want it to be wider than it is deep as a general rule of thumb.

The main purpose of a swale is to gather water runoff and slowly divert it down hill, this is usually done by the swale holding a lot of the runoff so it can soak into the ground, any extra that the swale can't hold is then run, by a spillway, to another swale, a pond, or on to a stream.

If I was to use an 8" wide Trencher to create a swale I would do it in multiple passes, start at a depth of 12-14" and do enough passes to get the width to a minimum of 36" (4 passes side by side). At that point I would, if it didn't seem to be deep enough, take two passes at an additional 8" depth, from the center of the now formed swale, this would be the shape that, once some water has entered, will collapse to form a nice curved bottom and hold enough water to start the plume action. The trencher can place most of the dirt dug out into the beginning shape of the berm but some use of a scoop or shovel may be required to get the berm formed at a distance that won't tend to let this soil fall back into the newly formed swale (generally the berm is set back 12" from the downhill edge of the berm). This is done so the dirt won't collapse back into the new swale, which would require more hand work to repair. Once you have the swale dug and the berm formed, seeding with ground cover plants will prevent soil erosion of the berm.

From your photograph it looks to me like you could have a nice series of swales/ berms and set up so the water from the highest swale meanders down the hill side.

Wesley Hall
Posts: 1
Location: greenville, sc
3
posted 7 years ago
If you were able to follow the trencher and fill the trench with say woodchips then this would avoid the leg breaking aspect and still allow water to be captured. It would then be similar to keylining but with a slight berm to also help capture water. I would still try and create some spillway on the berm to allow water to safely pass by it and not destroy the berm that you create.
Terry Paul Calhoun
Posts: 40
Location: Ann Arbor, Michigan
3
posted 7 years ago
Very helpful information. Thank you.

Given the comments about "leg breaking" I'm starting to think that a trencher might be more trouble than it's worth.

As far as calculating size, most of folks I know have just used intuition, but there are a lot of tools out there to help you do the math. Usually, people just dig them, and then "accept feedback" if they got it wrong. If the swale is too small, it can "blow out" and sometimes take plants with it, or cause significant damage to a crop. On the other side, I've seen folks dig too deep, and either destroy the landscape hydrology that their young trees needed to survive the first few years, so that they would have been better not to dig any at all. I've also seen a few examples of swales way too deep that instead become permanent ponds. In my opinion, they should be as small as possible and still do the trick.

So, my gut math would be that a swale that size, depending on your soil, would probably be good for an orchard of semi-dwarf trees at standard row spacings (16') at most, but I'd still make sure I planned a spillway in case they overflowed. (My gut math for those interested: a 16" (two passes) by 24"swale = 14 US gallons of water/linear foot. .6 gallons/SQF of collection area (swale spacing) for every inch of rainfall. Assuming 20 of row spacing, 20' * .6 = 12 gallons, pretty close to the 14 gallon capacity. Infiltration of clay loam might be .2 inches per hour or less. In my region, a storm can deliver as much as 7 inches or more.)

There are a few ways to calculate the size of your swale, and University Extension offices in the US usually have resources for "rain gardens" which essentially serve the same purpose as swales, to catch and infiltrate water. Here's a few examples:

Having a quick go with one of those calculators and assuming a clay loam soil, and a spacing of 20' between swales, it suggested a volume of 7.2 cubic feet per linear foot, or about 2' deep and 3' wide for every 1' of length. On sandy soil, it recommended much smaller swales, just 3 cubic feet of volume....

We used tools like this to size our swales and they turned out much, much smaller--almost imperceptible--than they would have if I had just guessed. I've observed them in very heavy rains and never seen them fill close to overflowing.

So, IMO, it's worth the time to do the math.

Wesley Hall wrote:If you were able to follow the trencher and fill the trench with say woodchips then this would avoid the leg breaking aspect and still allow water to be captured.  It would then be similar to keylining but with a slight berm to also help capture water.  I would still try and create some spillway on the berm to allow water to safely pass by it and not destroy the berm that you create.

I was just doing as search to make sure an idea for a new post was not redundant and found this description of something similar to what I have done with success so far. After using a trencher in installing irrigation pipe at a food forest site in a poorly drained location have worked on and helped design to work with this overabundance of water in winter, we decided to further utilize the work done in installing 4" french drain pipe/weeping tile atop the irrigation pipe which ran around the perimeter of the sit. We then stuffed woody debris (branches and small logs) into the trench up to 4" below grade, then topped with wood chips for a path for humans as well as fungus. One might think the wood may float when the trench floods, which it did, but by that point the wood was sufficiently waterlogged to stay put even when we had 5" in a day and the field was muck. We found far more diverse fungal growth along this wood filled trench. Also, being very close to level and sitting upon a nearly impermeable silcrete layer, it allows for underground irrigation and fertigation that reduces losses to evaporation. We are close to completing a similarly designed french drain around a 1200sq ft greenhouse we just installed, where the runoff will go to small settling ponds and then bog gardens and wetlands before overflowing, going down through forest-wetland and towards a stream. It seems a trench dug at the right slope (1:500-1000), such as one could dig with a rented trencher, filled with woody debris (and perforated pipe where feasible) could function a lot like a keyline done with a specialize plow. That's my theory and its showing benefits so far in just over a year. I will post pictures and video shortly.