posted 6 years ago
So, everything has a beginning. I don't know why, but I had the craving to watch a good documentary recently, and since I really enjoyed watching America: The Story of US a year or two ago, I decided to watch the History of Canada and learn more about my Great Northern Neighbors.

In Episode 1 of the History of Canada, they mentioned how the First Nations people smeared dirt and red ochre onto themselves and weren't clean, as people of the time considered to be "clean" which isn't that different from what people now consider to be "clean" (i.e. soap and water). I was intrigued by this and decided to do a little bit of research to see why other organisms and humans would bathe in dirt. Bathing in dirt lead, unsurprisingly to, eating dirt- geophagia. They seem to be somewhat related because when I was searching on Google, there were cross-links between the two topics. So, I've decided to put the topics together in this thread (hope no one minds that!).

Geophagia is simply put the eating of dirt, and dust bathing is just what it sounds like. 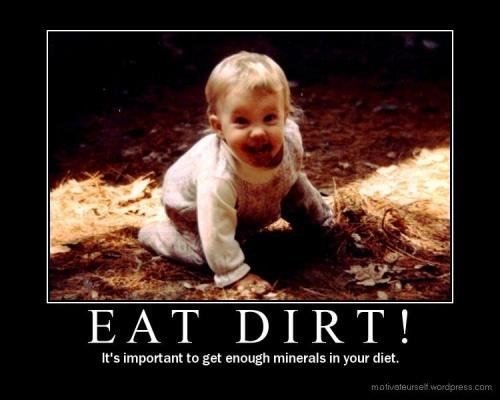 -According to an article from Scientific American, they believe there are two reasons why people and other organisms eat dirt: to provide nutrients and minerals that cannot be otherwise obtained from their diets, and/or to function as a detox for their bodies. Clay particles are very fine and negatively charged which makes them good for binding up alkaloids.

-In Australia's aboriginal peoples, soil and mud is used for dressing wounds, eaten orally to treat diarrhea and stomach problems, and termite mound dirt is eaten as a source of iron.

-For the Beothuk of Canada, Ingeborg Marshall thinks the red ochre has religious and spiritual value as well as tribal identity.


Moving forward a bit into "modern times," there is a company called Mother Dirt which is an off-shoot of their original company called AOBiome which appeared a year ago in a New York Times article. The short-story of this company is that the founder saw a horse bathing in the dirt, and he concluded that the horse must be bathing in the dirt b/c there's something there, and there was: ammonia oxidizing bacteria.

I am particularly interested in this topic and discussion because I want to know what D-I-Y ways there are of getting "naturally clean" that don't involve water or soap, but instead DIRT! And that i'm just stingy with money!

There is a similar (but very different) thread on permies about no shampoo or soap (i.e. going poo-less) which when I first heard of it, I thought poo-less meant not poo-ing which made me freak out, but then I found out it meant not using shampoo or soap.

More about that can be found out by listening to Paul Wheaton's podcast on going poo-less.

So, back to point, I would like to know if anyone has tried eating dirt before or bathing in dirt and what they thought of it. Would you recommend it to your friends and co-workers? Do you know of any other good sources of information about geophagia and dirt bathing? What other uses are there for bathing in dirt?

Alder Burns
pollinator
Posts: 1614
Location: northern California
233
posted 6 years ago
When I lived in Georgia you could find lumps of "white dirt"....kaolin clay, for sale in some grocery stores. Folks of African descent would partake of it. Now I live in California and process acorns for eating.....some of the Native peoples would mix some clay and ash in the cooking water for the leached acorns....apparently these helped to neutralize any remaining tannins.....
Joseph Lofthouse
steward

When I am evaluating whether or not I want to grow in a new field, I taste the dirt... I have an incredibly sensitive chemical detector at my disposal. Might as well use it. Besides the root crops I grow in that field will taste just like the dirt that they grow in. If I don't like the taste of the dirt, then I won't like the taste of the vegetables. I first become aware of this when I left the mountain valleys and moved to Ohio. The (Michigan) potatoes never tasted right. I never knew why until I returned home, and it smelled like home, so I had to taste the soil. It tasted just like an Idaho potato!!! Ha. So I stopped buying Michigan potatoes and started buying Idaho potatoes, and then the world was right again.