Sean Benedict
Posts: 34
Location: Chesapeake Beach, MD Zone 7b
1
4
posted 7 years ago
Does anyone know anything about importing goods from Russia?

These would be super useful on a snowy piece of land and much cheaper and easier to maintain and transport than a full blown snowmobile. 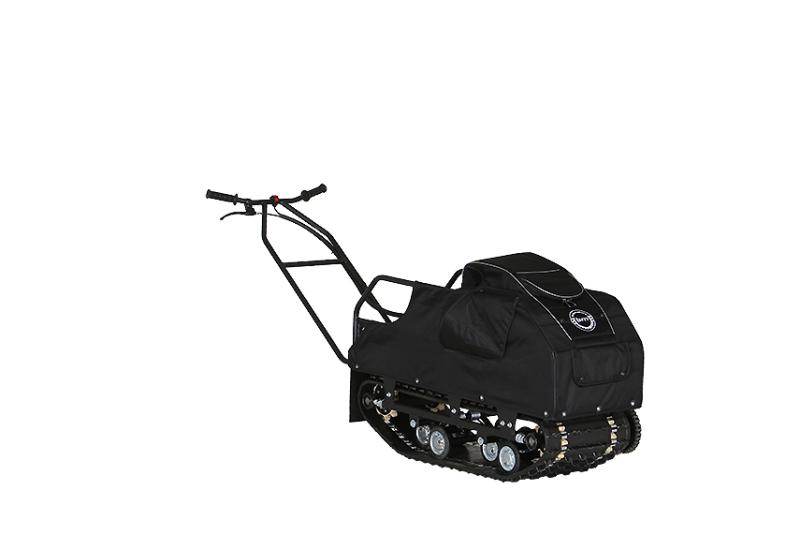 These guys aren't the only manufacturers of this item. They're just the reason I even found out about them.

Anyone know a good translation of MOTOBUKSIROVSCHIKI?? The best I can come up with is moto towing or moto tug.

Is this is a fairly uniquely Russian device with no analog in the US?

This is my signature.
There are many like it, but this one is mine.

Landon Sunrich
pollinator
Posts: 1703
Location: Western Washington
22
posted 7 years ago
I know that Russian ships pretty regularly make port of call in Tacoma, Everett and Long Beach. So like, commerce exists. I don't know what it takes to get a little corner of a crate to yourself but I wouldn't mind knowing. Good luck!

This looks to me like a compound word. I will go fish.

Don't know about that last bit. I'd like to think it was to do with snow, but not by my dictionary or congigating. Russians a bitch.

is about as close to Ovshiki as I can get to readily.

posted 7 years ago
Fascinating devices! I used to live in Alaska but I never saw such a thing. It wouldn't be better than a snowmobile for most projects, but as a sort of small snow tractor, the Russian one at least might be very useful in heavy terrain where a snowmobile cannot go or would be too risky. And the Canadian one seems to be electric, which would make it awesome for purposes where loud engine noise is unwelcome.

As for the Russian one:

For my sins, one of my double majors (at the college that is now chasing me for donations in connection with the 25th reunion I won't be attending) was Russian language, and I did a study abroad in the spring of 1988 at Moscow Steel and Alloy Institute in the USSR. I could sorta speak and read Russian then, but a quarter-century later it's mostly long gone. However, with the aid of Google translate I can usually puzzle stuff out. -ики is a plural suffix, singular -ик, that often means "person who does a thing" and which I suspect just means "thing that does the thing" here. So my best guess at the translation of that word is simply "motor-tractors".

Another word used on that page is Мотособаки -- literally "motordogs" but I would translate it as "iron dogs" which is a metaphor used in Alaska to mean snowmobiles. Edited to say: it looks like the Russians are translating it as "SnowDogs" which is not literal but which is practical and expressive.

The website offers a bit more detail, but it's pasted in photoshop on flash images that rotate by and can't be seen by Google translate. For pedagogical purposes I grabbed some of those images and pasted them up into a thing we can point at for discussion: 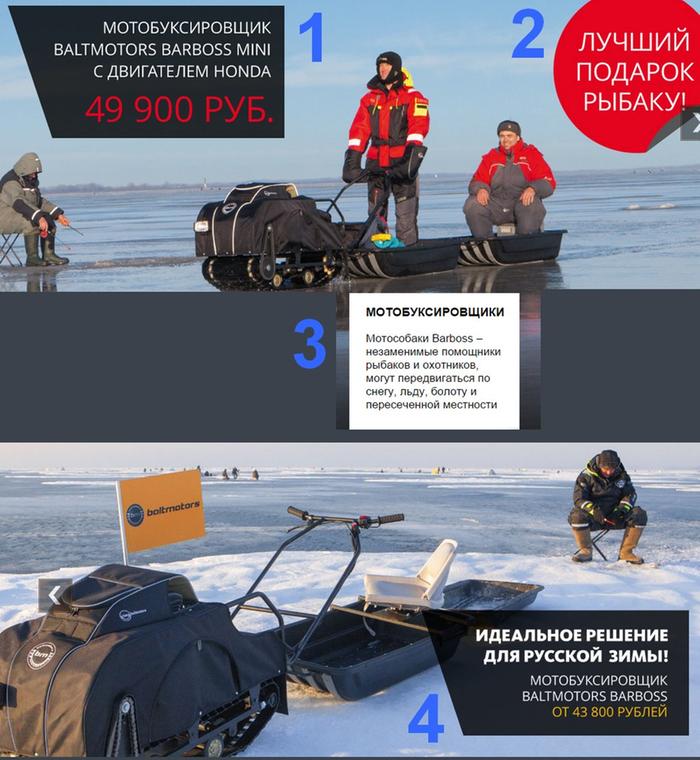 My rough translations -- very rough! -- are as follows:

What I'm seeing in those two photos is probably the best use for the device. If you want to cross unreliable ice, standing in a boat that's towed by your iron dog is not a bad way to do it; even if the dog falls through the ice, your boat won't, and you can probably recover the iron dog.

After writing all this I went to do a bit more research on Baltmotors Barboss and discovered they have a perfectly fine English website here. Doh!

The Motodogs are designed to carry passengers and compact cargoes on frozen water surfaces as well as on snow. They provide excellent maneuverability and operational simplicity requiring no extra skills from the driver.

That explains why I never saw anything like this in the US, since Baltmotors has only been around since 2004. If you go to that page, they have full contact information for a product manager in Kaliningrad who could probably put you in contact with a North American importer, assuming any such exists. But Google doesn't leave me optimistic.

However I did find this amusing video of a chelovek having way too much fun with his SnowDog, to the music of ZZ Top. The chief flaw I see is that the device seems to lack much of a steering mechanism; the operator seems to just lever it in the desired direction by yanking on the handle bars, which seem lightly-designed for that purpose. I've done a lot of snowmobile freighting and it's astonishing how quickly stuff breaks under those conditions. But this is fun to watch anyway:

YouTube will suggest a bunch of similar videos for you once you've watched that one.

See, now that sounds totally right! But like I have no idea how you got from

I guess it doesn't really matter but I'm totally curious

posted 7 years ago
Two different words here, both of which appear on the page:

and then the one Shawn asked about:

Which breaks down to:

Мото - motor
буксир - tractor/tug
овщики -- plural suffix, singular would be овщик. I mistyped before and didn't mention the ов syallable. I vaguely recognize the suffix; it usually refers to a profession or occupation, meaning "a person who does it". Example, гробовщик means undertaker, or man who does coffins (гроб, possibly a cognate of "grave").

Here is a page in Russian about the suffix овщик : http://znachenieslova.ru/slovar/efremova/-ovschik-evschik-i-yovschik-suffiks

The Google translate doesn't do you a lot of good but it does sort of back up my intuition about this suffix.

I had no idea Baltmotors had an English site. They're main site didn't seem to have a link.

Perhaps some industrious Alaskan or Montanan entrepreneur will get into the Snowdog importing business.

This is my signature.
There are many like it, but this one is mine.

Tom Kozak
Posts: 107
Location: Sudbury ON, Canada
2
posted 7 years ago
looks like the back half of a snowmobile with a special frame welded onto it? probably lots cheaper to do that (or, god forbid, hire someone else to do it) than import one all the way from Russia. or is there something im not seeing?
Mike Hamilton
Posts: 82
Location: north end of the Keweenaw Mi.
posted 7 years ago
I see another ''summer project'' in the making
this would be awesome for ice fishing and general messing around

Tom Kozak wrote:looks like the back half of a snowmobile with a special frame welded onto it?  probably lots cheaper to do that (or, god forbid, hire someone else to do it) than import one all the way from Russia. or is there something im not seeing?

Hello Tom and everyone else! I'm from SnowDog LLC, we manufacture SnowDog machines that were discussed here.

I understand this thread is 2 years old, please don't bash me for necroposting, people! But seeing how the question of SnowDog acquisition was raised several times, I decided to officially say: we are now selling SnowDogs in US and Canada
We have dealer network (and looking to expand it btw) and you can get all the info on buying SnowDog on our website getsnowdog.com! And this email address info@snowdog.com is for any other questions you'll have.

Bye, guys, have a nice day!