I am considering and planning acquisition and development of a small acreage in southern Missouri. I feel this a natural gathering place for alternative building and off grid living.
I will be sinking my modest available cash into buying the land outright and placement on a cistern. I will be a single person, alone.
I have considered compressed earth block, earthbag, cinderblock and a small wooden shed. Southern Missouri has a freeze thaw cycle, gets down to about 0F and may reach 100F on rare days. I gets a bit over 40 inches of rain per year. It does not have high winds. It does get a few rare tornadoes. It has minimal to moderate seismic activity. The frost depth is about 24 inches.

I have a 10x20 ft storage (rented) filled with property. I will need to store it as soon as possible. With care, I can fit that in a 10x10, some can be placed outdoors.
I would like to use as many materials from the property as possible, buying things will be difficult.

My first thought is a 16 ft earthbag round house, sunk into the ground about 2 feet and then bermed another 2-3 ft up the wall. I will be using EPDM to create a water barrier between the earthbag wall and the berming. I should get a small loft from that. This should eliminate the need for extra storage. Something similar to this, sunk into the ground and a bit smaller: http://www.earthbagbuilding.com/plans/towerhouse.htm
This would be great. Ideally, I would build with metal and stone, perhaps in a few years. Currently, Im thinking a modular design, and butressing out from the wall, to later build greenhouses inside of.

What I need to do, is build quickly and large, without the need for a lot of electricity and outside materials. I am looking at interlocking compressed earth blocks, as the cost of earthbags and barb wire and ultimately, cement (OPC) will bring the costs up to where I could just purchase a block press and cement outright. CEBs will require some cure time, while earthbags go in place right away.

I am currently drawing a floorplan, I will upload in a day or so.

Ash Medai
Posts: 6
posted 5 years ago
So Ive been doing some sketches, this is about the best so far. It may be a bit hard to read, so I will explain it a bit. Im attaching to copies, one off my phone, the other touched up a bit, neither are real great.

Basically, on the left is the end and on the right is the side.

Im looking at digging into the ground 3 feet (frost depth is 24 inches or 2 feet as you will. The dimensions are 12 feet by 24 feet. I would then put in a small layer of sand in the bottom and dig a short trench of the depth of about half an earthbag in height. Lining the bottom and sides with 20 foot wide 6 or 10 mil plastic, possibly 2 layers. I would then put earthbags up to 5 feet high, three feet underground and 2 feet above, resting the upper 2 feet 'just a bit wider' using both barb-wire and rebar spikes placed every few feet. Id wrap this in the sides of the plastic up to the height it would go to create some water proofing and radon barrier. Over this, Im looking at ferrocement. Using larger 1.5" to 2" pipe every 4 feet with #4 rebar between them every 8 inches. The roof takes a catenary type arch. On top of the rebar and pipe 'ribs' there would be a layer of hardware cloth and 6x6 remesh. All of this tied together should be fairly strong, especially given the fairly short distance. End walls would be built of earthbags somewhat traditionally and covered either with ferrocement or an earth plaster. Waterproofing would hopefully be done by the ferrocement, though a layer of lime of even an elastometric coating will be used if needed to stay dry, but I think it should be ok for a few years. A wood burning stove (or built in fireplace should provide heat. This dwelling is about 288 sq ft and should have just shy of 9 ft ceilings at the apex. Solar, a water cistern and a DC deepfreeze should keep things going for awhile until I can get a greenhouse going and some chickens.

It is hard to say without seeing the final site, but this should come together for a very small amount of money and can be built by a single person over a few months in stages. The roof can be covered with tarps temporarily until the cement can be used. further the inside can be insulated well, Im looking at the 1/4" pink foam sheets, they will fit between the pipes and steel and give something for the cement mix to press against. 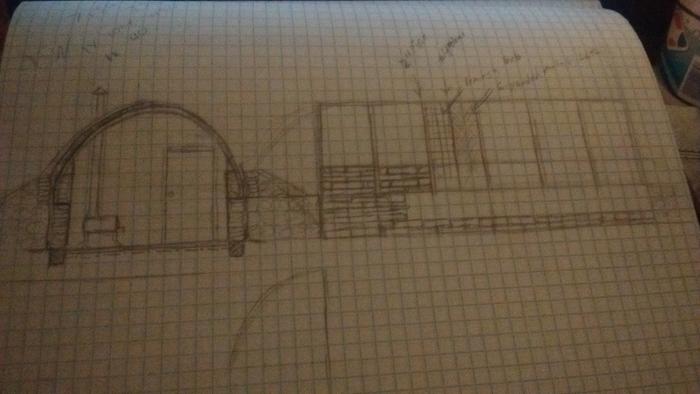 Mike Feddersen
Posts: 497
52
2
posted 5 years ago
Ash,
Congratulations on your plans. I too like the idea of building with ceb' s, cob anything but normal cookie cutter with 30 year mortgage.
.
Considering your initial small to start size, maybe consider a yurt. Not so much the canvas style, but a wooden Adirondack style. https://www.pinterest.com/pin/286893438735870638/
I did some research awhile back and they weather well, winds are no problem. The round shape would give you tons of space I saw one that had a separate bathroom/utility yurt, you could use it as storage. I've seen a geodesic dome style made with plywood triangles with insulation boards.
Mike Feddersen
Posts: 497
52
2
posted 5 years ago
Alder Burns
pollinator
Posts: 1613
Location: northern California
229
posted 5 years ago
Quick and cheap are relative. How quick and cheap? I've helped work on earthbag, strawbale, and cob projects, and they are all tedious and labor intensive at one stage or another in the process. I mulled and studied the challenges of building for myself while living in a moldy old army tent through a couple of wet Georgia winters, and ended up building a couple of cabins based around pine poles and bamboo gathered locally, and then scrounged materials.....namely cardboard, plastic, and old carpets, all of which are available in quantity in any sizeable town. A few car-loads of these, strapped on top with ratcheting straps, was enough for each project. They basic idea was to layer the frame, walls and roof, with 2 thicknesses of cardboard, sheathed outside with overlapping courses of plastic, followed by overlapping courses of carpet. The carpet was then stuccoed on the outside with mud on the walls (under an overhang) and cement on the roof. The cement hardens in the carpet and makes a solid surface. Those cabins never leaked, not in ten years, and I had five people on the roof once! And they cost less than $50 each for `~150 square feet, with attached plastic greenhouse.
Dan Huisjen
Posts: 51
Location: Acadia Region, Maine.
6
posted 5 years ago
The problem with these wide eyed videos of young hip persons with their yurts is that these are young hip persons with BRAND NEW yurts. I look at that yurt and the first thing I think is how lightly framed the walls are. I've seen a few yurts, and most are framed much heavier than that. He needs an actual door. He has no way visible that keeps rain from blowing under the edge of the wall. It's daytime, and he has a bunch of candles lit around the shrine of his bed. Is this a home? Or is this just a bedroom? Where's the kitchen? He calls it "breathable". That's often another term for "drafty". Well, canvas tents don't hold up on east coast summers. They rot. Nylon doesn't hold up to UV. What's the skin made of? He's got Mongolian felt via Canada. That can't have been cheap.

In short, I want to see videos of people talking about lessons learned after living in one of these for three years.

Meanwhile, here's a picture from when I build the frame for my greenhouse eight years ago:

That frame cost me $100, for a 16'x24' frame. There was a lot of scavenged lumber in the bracing and the blocks in the trusses. That doesn't include whatever foundation, but I have another one on a layer of pallets just like Yurt Boy Charlie, except that has walls that cover the pallet edges. I use that one to dry my laundry and firewood. It sheds wind very well.

If I needed cheap fast shelter, I'd build a 16' x 20' gothic arch like this, with 2x6 blocking instead of the 2x4 I used for my greenhouse. You'll want that wall thickness for the insulation. I might tighten up the frame spacing to 3', rather than the 4' in the picture. I'd set it on pallets, as smooth as I could make them, then put 2" of foam down, air seal it, and then plywood. That would be my floor. I'd plastic up the interior face, then board it up on the inside. Pay attention to making the inside as air tight as you can. If you don't like plastic, maybe use big canvas painter's tarps. Put your doors and windows on the end walls.

Then board up the outer walls. Run the outer boarding at least 6" long to protect the tops of your end walls. When you're up to the top, and maybe somewhere along the way, blow cellulose into the wall/roof cavity. Push it down in there with a rake too. With the rental machine from Home Cheapo, you'll only get it so tight, and it will settle over time, but it's the cheapest stuff there is, made of old newspaper and laundry borax. Later, if you take this thing apart, get a giant shop vac and vacuum it out. You can then save it and blow it into whatever you build next if you're careful. Then put on that top roof board and roof the place up. Cellulose will wick moisture back and forth, but will stop air flow, mostly. If you do exactly like I've suggested here, that's about 720 square feet of wall and roof. Call it 360 cubic feet at 1.3 pounds per cubic foot, currently 26 bags, 18.1# each, at $12 each, about $310 plus tax, which is about the cost of the cord of firewood you'll save. The insulation is very worth it.

Call contractors and tell them you're looking for ugly but usable take-out doors and windows, and even used lumber.

Don't get a nasty barrel stove like Charlie has. You want a clean burn wood stove, or a clean burn rocket stove if that's part of your skill set. The rocket stove is going to be harder to build on the pallet foundation though. Remember, we're talking temporary. A dirty stove is a chimney fire in the making, and a waste of heat.

This will give you something between an old '70s A-frame and a Nordic Boat-House.

Ash Medai
Posts: 6
posted 5 years ago
hey Dan, thats awesome, not far from what I was thinking, now for covering, do you think ferro cement would be a good choice?

How hard was it to bend the plywood into the arch shapes?

Not far from what Im thinking and may well go up faster than the earthbermed bunker I have drawn. If I can get something like that, I may well be able to live in it for a few years and build a better home.
At this point, Im waiting on new in about 6 weeks before I make any plans.