posted 5 years ago
I've been working on a complex area next to the house where we have our emergency rain water supply, laundry greywater bed, and future citrus grove: https://permies.com/t/53597/trees/Lemon-scheme We just moved the second rain tank into position and soon I will be planting the area to a small grove of citrus. How can I add more functions to this area? I'm thinking of adding some vines to grow over the tanks. Can I get this area to do Shawn's magical 7 things? 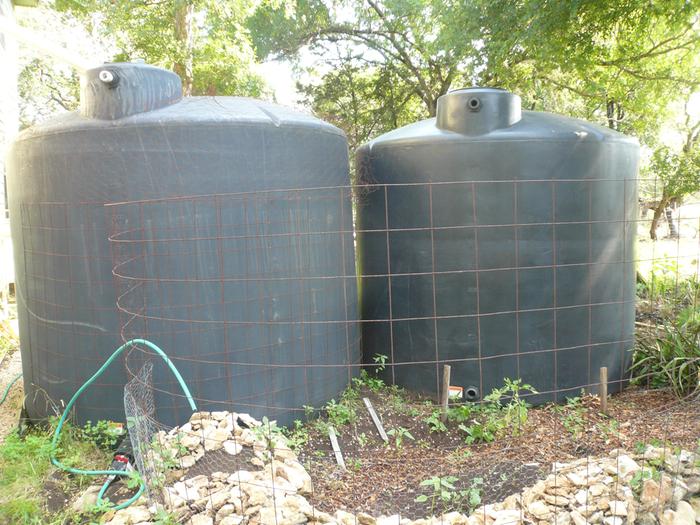 posted 5 years ago
Are the tanks intended to be full most of the time or be used for watering during dry spells? Not sure what you mean by "emergency rain water supply". IE. prepper drinking water or huge irrigation rain barrels

Is the thermal mass of the water tanks intended to help the citrus out? If not, maybe you could harness that function for a plant that needs help in your summer heat (unless the tanks get empty when it's hottest/driest).

The shade from the tanks could be something to take advantage of.

You could space the tanks apart a bit and build a roof/pergola between them for vines to climb on. Then put a bench under it and you have a cool place to sit

Might you be able to harvest or distribute the condensation off the outside of the tanks when the tank water is cooler than the dewpoint of the ambient air?

posted 5 years ago
Mostly household emergency water - I might use a few gallons but mostly the tanks will remain full unless there's an emergency which prevents us from using the well.

posted 5 years ago
Good, then I'd think you have more functions to build off of. The thermal mass and temperature moderating effects of those huge tanks are a definite opportunity.

posted 5 years ago
Excellent work Tyler! You da boss! This will be a really interesting experiment to watch! Sending you and your citrus all sorts of good vibes.

One idea I thought I might throw out there: I am from a citrus family in warm climes. But even in an area with (usually) extremely mild winters, unusual winters do happen. And I think in this era of climate change, things are likely to be getting more and more unusual.

Anyway, at the "ranch," we had "smudgepots" distributed throughout the citrus groves -- essentially big enclosed pots of heating oil with a chimney attached. Very inefficient and a total enviro disaster I'm sure. Madness. There was a very very loud horn that went off if the temperature ever got below freezing (or perhaps it was a degree or two below freezing, I don't remember, I was a kid). That was the signal for everyone to get up and turn the windmills on (gently moving air does much less freeze damage to trees than still air), and if it got a couple of degrees cooler, they ran up and down the fields throwing burning rags into the smudgepots, which was an expensive proposition, but if you saved next year's crop, it might possibly be worth it.

This worked well enough for a couple of decades. Then we had a really unusual year, and nighttime temps got way, way, way below freezing every night for a couple of weeks -- never before heard of, everyone was in a state of shock. And all the king's horses and all the king's men... Anyway, a lot of trees were lost and so were 3 YEARS of lemon crop. This year's lemons, next year's set, and even the branches that were going to set buds the following year for the crop 2 years from now.

So I'm thinking, you're doing great prep work creating a microclimate for your citrus. But maybe you should have a bazooka-level tool/gizmo or two available for when the going gets really tough. So I thought of two things:

One, I heard that nearby lemon farmers in a colder microclimate during the cold, cold winter in question did something ingenious: They set sprinklers on top of their trees and started them going as it started to freeze, and kept them going. I guess this worked on the igloo principle: better for your tree to be protected by freezing-temperature ice than exposed to far-below-freezing air. Apparently it was important to keep the rainbirds going, as the new water on the outside freezing into ice kept the temperature of the ice from dipping below freezing. Pictures of this event were spectacular, the trees were turned into enormous icicles. Of course, many branches were lost to the weight of the ice. But the trees were saved. Anyway, this solution might not be hard for you to set up given that the neighbors of the trees are enormous water tanks. Though of course you want your tanks full at those times for thermal mass. I guess it's have your cake and eat it too.

A second solution that might be easier and provide additional thermal mass is to build a RMH out there in your citrus grove. You don't really almost ever have to use it unless you develop a hankering for barbecue in December or something. But if things ever get too desperate, just fire it up and let it radiate away through the night. The rest of the time, the mass of the RMH could be helping thermally moderate the microclimate around the trees anyway.

Lots of luck with your project -- we'll be watching. And congrats on the great progress you've made today.

PS - What are Shawn's magical 7 things? And who is Shawn?

posted 5 years ago
Thanks for those ideas Dave! I think I could easily set up a smudgepot type affair from the bottom of an old grill - just build a fire in there and let it smolder all night. Or maybe try the sprinkler thing. Both together probably not a good plan...

Shawn is this week's guest: https://permies.com/t/56093/permaculture/Shawn-Jadrnicek-author-Bio-integrated

posted 5 years ago
I don't know... Maybe RMH smudgepot + sprinklers = winter sauna session?! You could charge admission to your "health club"! And then raise money to dig some more swales next year. Actually, I would love to hang out by a steaming RMH in a freezing field at night... That's so... Swedish... You only live once, you know...

Shawn Jadrnicek
Author
Posts: 28
Location: South Carolina
5
posted 5 years ago
Your citrus microclimate looks awesome! Another way to add some function might be to keep both tanks full during the winter when you need the thermal mass. Then, in the summer when you have more need for water, keep one tank as a treatment tank/settling tank/emergency reserve that receives water first. Then the overflow from the reserve tank goes into the second storage tank for use. The water in the second tank would be cleaner increasing the functionality. "Water Storage" by Art Ludwig has a great illustration of this setup. A good resource for citrus ideas is "Hardy Citrus for the Southeast" by Tom McClendon.

posted 5 years ago
Thank you very much, Shawn.

posted 5 years ago
I recall from science class that when water goes from liquid to solid it releases heat. Surely not much, but perhaps enough to give protection from a light freeze.

By the way, those tanks look to be fiberglass. Before filling them with water you may want to climb inside during a sunny day and check how much light, if any, gets through. If they are translucent, then stored untreated water may turn greenish. That happened to my neighbor and he had to empty the tank, clean it out, refill it, and paint it to keep the light out.