Getting ginger root to grow instead of rotting or drying out -- how?

posted 4 years ago
We have several old threads (see "similar threads" list at the bottom of this one) about growing ginger, but none of them cover the problem that I seem to be having.

Which is this: I'd like to grow some ginger. I'm inspired every year in the spring when the tired old ginger rhizomes at my local supermarkets start to sprout -- the growth "buds" on the ginger root begin to swell and turn a bright fresh green that's visually very attractive compared to the grey dusty appearance of the old roots.

The stuff is sprouting. It wants to grow. I bring it home and leave in the sunshine, the growth buds get even bigger and greener.

But no matter what I've tried, I cannot manage any sort of transition from "sprouting ginger on my windowsill" to "ginger plant growing in soil".

Yes, I am a terrible gardener. But what seems to happen is that the growth bud never does anything more. Eventually the rhizome either shrivels up and fades away, or it rots rather suddenly. Either way, no roots, no foliage, no plant.

I've tried planting the sprouting rhizome deeply (some sites say 10cm!) and I've tried planting them shallowly, sometimes with the growth bud exposed and sometimes with it buried. I've kept the soil dry, I've kept it moist. Never a plant. I can find lots of "just plant the rhizome and it will grow" how-to articles on the web, along with standard advices about rich soil, good drainage, and filtered sunshine. Being a terrible gardener it's possible I've tried the right planting regime but failed in the execution processes. What I'm hoping for in this thread is some more detail from someone who does this routinely. How exactly do you handle a rhizome that wants to grow so that it turns into an actual living plant instead of a little pile of buried goo and/or dried-out fibers?

posted 4 years ago
I don't know the answer. I've noticed that with my own ginger here in Hawaii it goes through a dormancy stage period prior to sprouting. But that doesn't sound like your problem. Perhaps the commercial supplier to your store has treated the ginger with some sort of anti-sprouting chemical? I guess I'd try to get some certified organic ginger from a health food type store, where the organic claim may be more valid. That shouldn't be anti-sprout treated.

posted 4 years ago
Thanks! I thought of that, but... this stuff is already sprouting! I mean, plenty of ginger at the store never develops those buds, even if I set it on my windowsill for months. So I have always assumed (this may be where I'm going wrong) that the stuff I find with active buds is the stuff that didn't get sprayed. (And some of it has been sourced in organic stores of varying quality, which I took as supporting that theory.)

Could be there's something wrong with my assumptions. Maybe the stuff I've tried got sprayed and is growth-retarded but not entirely prevented from showing signs of sprouting, or something like that.

posted 4 years ago
I've seen, but sorry didn't pay to much attention to, posts on facebook about sprouting ginger in water. Check out New Leaf Co-op. Good luck!
R Scott
pollinator
Posts: 3620
Location: Kansas Zone 6a
106
posted 4 years ago
My daughter is really good at it. My luck is like yours.

It needs to be good rich compost or potting soil that drains well. Moist but not wet. Kept in shade. Warm.

posted 4 years ago
I've had success by planting my ginger under the shade of trees or on the north side of our house where it only gets 4 or 5 hours of direct sunlight. This is good, as this space really isn't useful for most other veggies.

The soil is VERY rich in decayed organic matter (wood chips that have decomposed and have been replenished for years). So because there is so much humus, it both drains well as well as retains a consistent moist environment for the ginger to stay hydrated while it roots. I don't fertilize it until it is up about a foot or so, as the soil is already so rich. If your soil doesn't drain well, perhaps you could put a couple of handfuls of sand and compost down in your planting hole before you set the ginger in place.

I think that maintaining uniform moisture is important. If your soil isn't rich in organic matter (carbon), then heavily amend your soil with compost.

Also, it needs to be above 55 degrees consistently for ginger to really take off and start growing well.

I've not had luck growing ginger in pots. I think that the uneven moisture and uneven temperature adversely effects it.

posted 4 years ago
I begin to see where I have been going wrong. My default soils are neither rich nor well-drained, but keeping them moist in the weather regimes we have is not easy either. I think I'm going to have to build a heavily-amended bed with lots of the rich black wormy wood chips at the bottom of my old chips pile, then mulch it to a fare-thee-well. Thanks for the tips!

posted 2 years ago
Late last winter I built an indoor terrarium in a covered fish tank with bottom heat (an old electric heating pad underneath) and moisture -- a water container with a fish tank heater in it -- inside.  And I planted my budding ginger roots in that.  I kept the whole thing at about 80 degrees and got two good sprouts.

Once my outside temps got nice and warm I moved the two plants outside to a planter that also had mint and a cucumber plant in it.   One of them died deader than a doornail.  The other one has hung on all summer without doing much; it has half a dozen leaves less than three inches long and is hiding under the mint.  I'll dig it back up and move it back inside here in a couple of weeks once our outdoor daytime temps drop below 80 again routinely.

I am hoping that I have a healthy ginger root at least and will be able to get a happy houseplant if I keep it warm and well illuminated this winter.  I am not in the tropics but I am willing to baby this one plant for the sake of ginger tea if I can convince it to turn into a large and thriving plant.  Right now it's been a lot of trouble for not much return.

posted 2 years ago
I have managed to get ginger to grow in the glasshouse. The things I have noticed are that it needs soil temperatures to be consistently warm before it wants to do anything. It likes lots of organic matter and good drainage. Don't let it dry out, but just keep it moist until you see shoots above the surface. I bury the root partway and then cover it with wood chips.

The same conditions are good for ginger's relatives: turmeric and galangal. All three of these plants did well for me this year. The galangal even flowered, and I harvested my first decent turmeric crop. Most was divided and replanted. Same with the ginger...I just saved the most photogenic root (it's in the lower part of the photo, and the rest is turmeric). 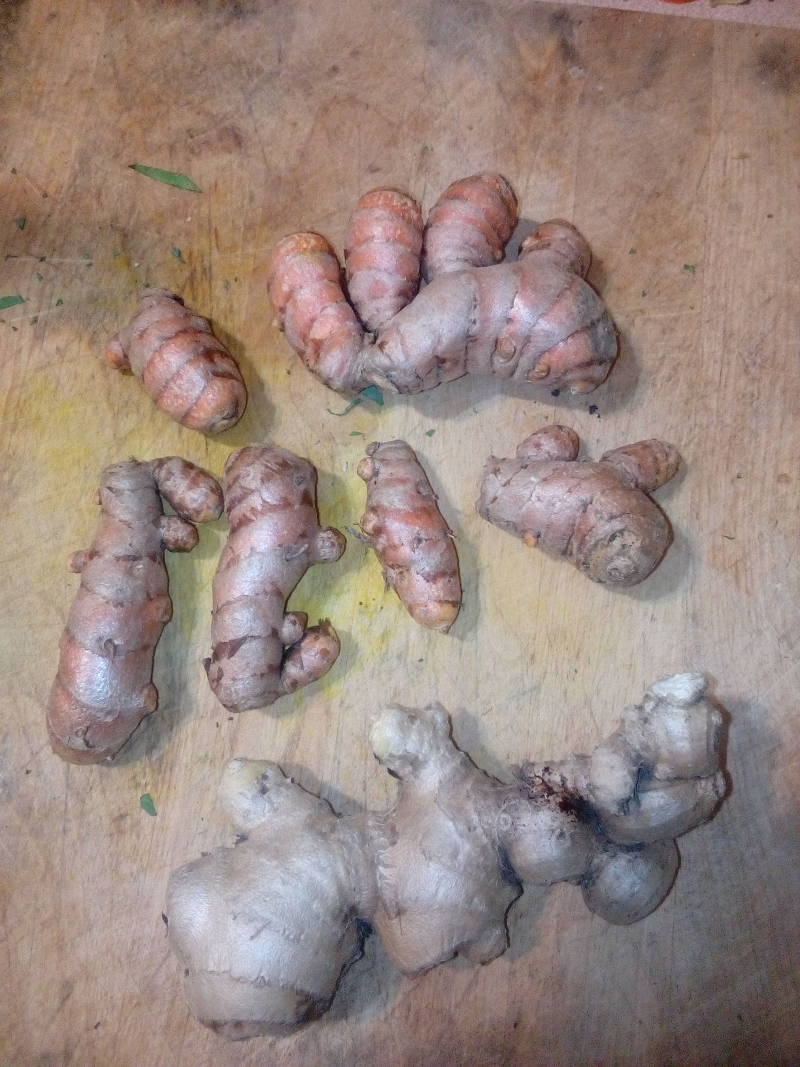 posted 2 years ago
Ginger is one of those "easy to grow" plants, if you don't have a green house and live in the deep south, you will have problems unless you create a humus and sand "soil" for the root to establish in.

The few people I know here, in Arkansas, that are successful in growing these roots have created mini, take down, green houses so they can start the roots growing then remove the green house.
They did this because it was the only way they could get the roots to sprout and grow the first shoots. Our heat and humidity are just too much for the plants to start well apparently.
I've not tried to grow these plants as yet, but do plan to build an area for growing Ginger and Turmeric over this winter.
My plan is to use giant cloches to get them started around May since that is when our weather is warm enough for outside sprouting of the tubers.

The soil profile I plan to use will be in the 8 to 10 percent humus range with a high sand content and for mineralization I'll be using sea-90 at 25 grams per root.
I will have to bury 1/4" hardware cloth 1 foot deep all around the bed so moles and voles can't get to the tubers.