building a pond to stop erosion?

E Cochran
Posts: 74
4
posted 4 years ago
We have a 5 1/2 acre farm that is basically a rectangle with a creek that cuts diagonally across the middle. Yesterday we were planting trees in a section we've only walked through once before and discovered that there is an erosion point where it looks like all the rainwater runoff collects and has formed a "new" creek. We don't want this to erode any further and were thinking if we built a pond at the head of it and still allowed excess water to flow out down the new creek bit we could stop the problem from getting bigger.

But we have no experience with this and would appreciate any advice we can get on what to do. Thanks.
Travis Johnson
pollinator
Posts: 4958
1154
I like...

posted 4 years ago
I would think that would only make matters worse. Have you looked into the use of brush dams?
Tyler Ludens
pollinator
Posts: 11804
Location: Central Texas USA Latitude 30 Zone 8
1058
I like...

posted 4 years ago
I would not personally put a pond in a gully because of concerns about it filling with sediment, but what we did was have a large basin dug where a gully was forming in some deep soil.  This differs from a pond in that it is not meant to hold water for any length of time, only to slow it and allow it to sink in.  This feature only has water in it during periods of excess rain.  Like a pond it has an overflow.  We recently added a berm to lead this overflow to another basin

Rock dams where brush is not suitable: https://permies.com/t/53556/Creek-repair-rock-dams


Can you post a satellite image so we can see the features? 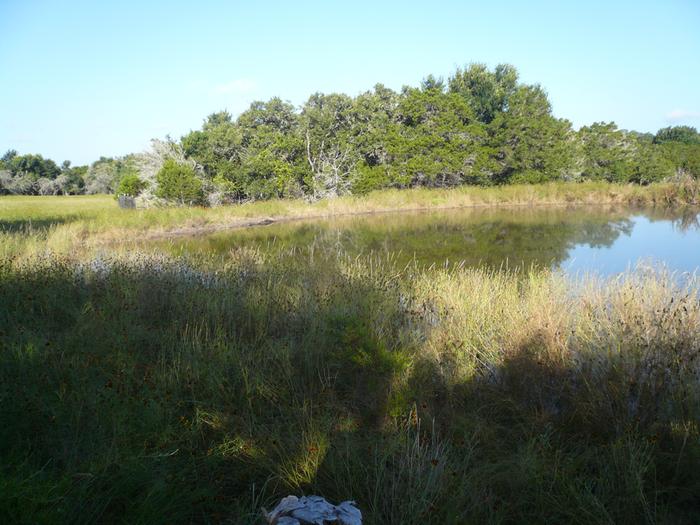 E Cochran
Posts: 74
4
posted 4 years ago
There is already a bit of a basin forming, that's why we were thinking of just expanding it into a pond.

How will a pond make it worse? I don't mean to sound ignorant here, but I really am. Is it just a matter of terminology? I mean, the thought was that if we had a catch basin for the water that was purposely built then it wouldn't just erode the land at will. Am I not thinking about that the right way round?

Brush dams would be possible.

I don't have any way to post a satellite image to show the spot. The google images are several years old now and I have nothing else.
wayne fajkus
gardener

posted 4 years ago
A catch basin is not designed to hold the water, just catch it and let it soak in. It's not sealed.

Pond is sealed so the water stays. So the next rain event it can overflow and create another gulley.

It really depends on your rain events.

I built a pond in a ravine. We've had big events. Like 12" rain in 2 days. There has been no downstream erosion from it. The overeflow is very wide and flows out gently.

posted 4 years ago
I think a lot depends on the health of the stream - is it eroding upstream of the pond site?  If so, the pond might quickly fill with sediment.  Also, a gully might indicate a high force of water.  Our upstream neighbors dammed the creek and the dam blew out in the first flood.  So the dam of a gully pond probably needs to be built properly with heavy equipment.  Geoff Lawton builds ponds in gullies but he uses big equipment to compact the heck out of the dam.  The ponds are also built with proper spillways - the water can't be allowed to exit over the dam wall, which may weaken it or wash it out entirely.  As wayne points out, the spillway needs to be built so as to avoid creating another gully.

Peter Ellis
Posts: 1536
Location: Fennville MI
60
posted 4 years ago
If I am understanding correctly, you have an existing stream and then another erosive runnel - I'm assuming it is running into the stream? If I am understanding correctly, this sounds to me like a situation that needs to be addressed with plantings and possibly swales on contour.  The trick to managing erosive water flow is not to capture it where it is eroding the land, but to divert it, spread, slow and soak it Before it gets to that point.

Once the water concentrates it is pretty much too late to try and prevent the erosive action.

E Cochran
Posts: 74
4
posted 4 years ago
Yes, we have a creek running through the land already.

Yes, this is a second place that is running water when it rains. It empties into the bar ditch which empties into the creek. Our problem with it is that there are some swales in place that channel all the water down the driveway and then out onto the land over a 30 foot section. I'm guessing we need more swales to divert the water further?? Because it all seems to converge on this spot.

Here's a pic of the depression and channel for the runoff creek that's forming. The white beyond the trees is the roadway. There is a bar ditch which empties into the creek before the road. To the right is the creek, to the left is the drive from which all the water runs. The depression is about six feet across. We really have no idea how long this has been forming. The property was abandoned for nearly 20 years and we just stumbled on it a few weeks ago. 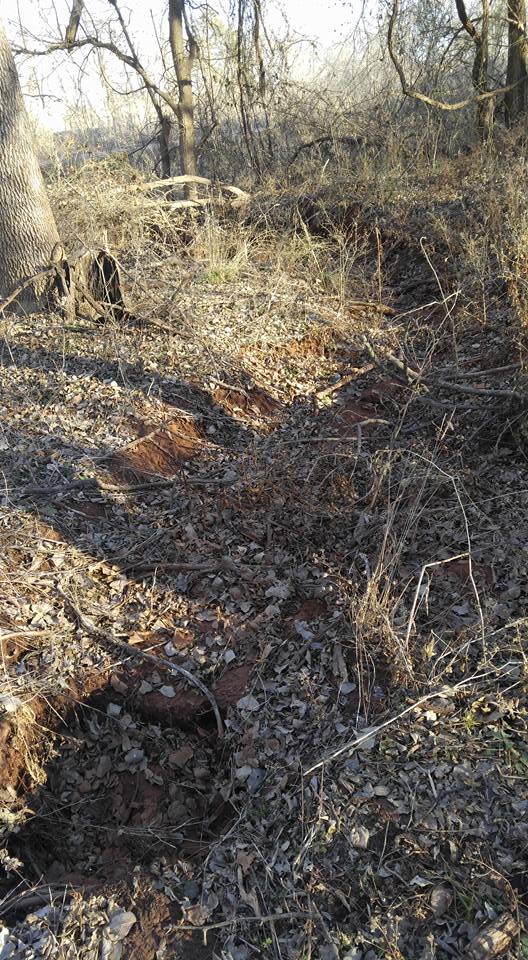 posted 4 years ago
Do you have access to any rocks? Maybe some small check dams would help?