charles c. johnson
Posts: 369
posted 11 years ago
Has this been done ?What do you feed them? How do you make them breed? Can the squirrels stay wild?
Brice Moss
Posts: 700
Location: rainier OR
8
posted 11 years ago
why? squirrels are voracious and they are hoarders if you attract them near your food they will find a way into the container and then instead of just eating their fill like other rodents they will eat their fill and drag the rest off to hide somewhere
Bull norris
Posts: 50
Location: Chanute Kansas
posted 11 years ago
manage them like a deer herd thin them out , feed back a little corn, just dont get greadie.
they will do all the work.
Jami McBride
gardener

posted 11 years ago
I have one that just set up a nest in my pine tree.  I keep sicking the dog on it, and the blue jays are going crazy at it, but we cannot get it to leave.  I may have to get a gun and recycle it

So far ours is eating the stash the blue jays hide.  I don't give it a chance to be on the ground, but it's a fight.

Buy a bag of raw peanuts and dole them out as you see fit.  Free food should bring enough to make you wish you didn't start feeding them. 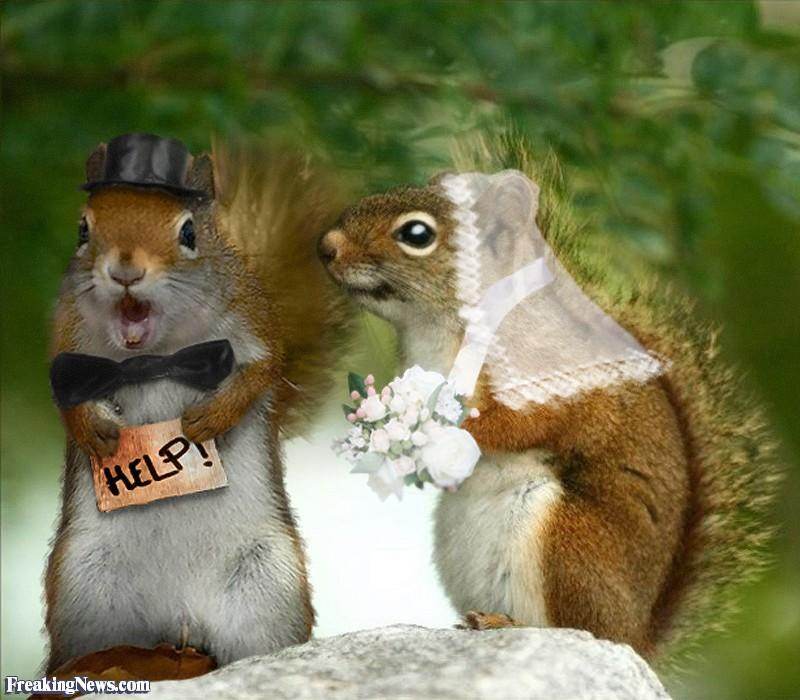 Posts: 5
Location: Interior Alaska/Middle Tennessee
posted 11 years ago
I've bottle raised a couple of orphans. They should be fed tree nuts, although they'll eat a wide variety of stuff. They really love shortbread cookies, but they're probably not good for them. Be warned: They are very smart, and they have a sense of humor that can really try your patience.
T. Joy
Posts: 438
posted 11 years ago
But... why would you want to do this? They seem to get along so incredibly well all on their own. Smart little buggers, dang cute too. Probably my favourite animal truth be told.
Emerson White
Posts: 1206
Location: Alaska
posted 11 years ago
If you want an adorable pet squirrel then catch one and feed it on peanuts and the like. However the only squirrels that we need more of take extremely poorly to captivity, so you should not be trying to rear anything but the common red and grey and ground squirrels.
T. Joy
Posts: 438
posted 11 years ago
Which squirrels do we need more of?
Emerson White
Posts: 1206
Location: Alaska
posted 11 years ago
Albert's squirrel, which dies if it doesn't have enough ponderosa pine to eat.

Edit: Checking my facts, it seems that Albert's Squirrel is just extirpated from some of its native range, but elsewhere it's fine.

T. Joy
Posts: 438
posted 11 years ago
Ok. I know I didn't see regular old squirrels out west when we lived in BC. There were some in Vancouver but I heard they were imported there (?!?). The rest of the native squirrels were teeny weeny mean little things, not the big fluffy cuties here in Southern Ontario.
Emerson White
Posts: 1206
Location: Alaska
posted 11 years ago
we only have the teeny tiny red ones here. They still do lots of damage though!
Posts: 5
Location: Interior Alaska/Middle Tennessee
posted 11 years ago
I recently saw what must have been the oldest gray squirrel that I've ever seen. His face and feet were solid white, and he looked bigger than a chihuahua dog. I'm not sure how he lasted so long, because he took his time getting out of thr road. Obviously, no respect for Chevy, Ford, Toyota, etc.
John Polk
steward

Posts: 7926
Location: Currently in Lake Stevens, WA. Home in Spokane
333
posted 11 years ago
I just read a report that stated that the city of Omaha, NE spends $500,000 per year repairing the squirrel damage to the electric wires within the city.  Yikes!

Emil Spoerri
pollinator
Posts: 426
15
posted 11 years ago
Flying squirrels are trappable, perhaps endangered? I know someone actually who used to keep them as pets!

Oh and did I forget to mention CUTE!

I think they ended up releasing them all because they didn't manage to keep them healthy : (

however truly I can't remember the whole story... I think he said they had babies and that one of them was really really tame and would cling to you like you were a tree all the time.

Fryed and made into gravy. sorry

If they find food at your place, there is no friendly way to rid yourself of them.

Brenda Groth
pollinator
Posts: 4437
Location: North Central Michigan
29
posted 11 years ago
Bill Mollison suggests in his book that you put them to work for you harvesting your nuts and seeds..

first you bury some pipes or containers fairly nearby the crop and allow squirrels or pack rats to fill the containers up with the nuts, seeds, whatever..he even suggests having critters harvest your wild rice.

then you steal the harvested goods leaving about 18 % for the welfare of the animal..

Emerson White
Posts: 1206
Location: Alaska
posted 11 years ago
I don't think Bill kept in mind that squirrels will ruin a stone fruit harvest by harvesting nearly a week early. They are playing a game of chicken with the rest of nature, and squirrels swere 4-6 days before the fruit is ripe, raccoons usually swerve 1-2 days before the food is done.
Mariah Wallener
Posts: 167
Location: Cowichan Valley, Vancouver Island, Canada
1
posted 11 years ago
In BC we have the Red Squirrel, or in some parts the Douglas Squirrel. The Grey Squirrel (which, confusingly, can also be black) is the "invasive" species. In some places it has all but "kicked out" the native ones. Flying squirrels are nocturnal and thus not frequently seen. Apparently there are no flying squirrels here on vancouver island.

I, too, would like to know why someone would want to "husband" squirrels. They seems so successful on their own.

Wish I hadn't read that.

just like most things my favorite is fried.  now adays with being a scosh more health conscience, its whole wheat flour with olive oil.  .....extra virgin of course.
Mariah Wallener
Posts: 167
Location: Cowichan Valley, Vancouver Island, Canada
1
posted 11 years ago
Wow. Never occurred to me to eat a squirrel. Wouldn't think there'd be much meat on it.

Wouldn't rabbit be a whole lot easier, and yield more meat? Ah well, to each his own. I have nothing but respect for people who eat what they hunt.

L8Bloomer wrote:
Wow. Never occurred to me to eat a squirrel. Wouldn't think there'd be much meat on it.

Wouldn't rabbit be a whole lot easier, and yield more meat? Ah well, to each his own. I have nothing but respect for people who eat what they hunt.

eating squirrel is a common fare.  and there is meat on them.  mainly all in back legs and some in front legs.    good eating too. fried up with some gravey.  course there isnt near the meat as there is on domesticated rabbits. but its better to eat something thats killed than not.  its common around here for folks to eat squirrel brains.  mainly with eggs in the AM.  ive never done that. but many do.
Posts: 12
Location: Alberta Canada
posted 11 years ago
Squirrels are cute until they chew through the wires in the attic and burn the house down.

Then there is the damage they do building nests, chewing holes in soffit and facia wood or metal.

They are rodents and their population is, to some extent, governed by the food supply.

Up the food chain from squirrels are skunks, smell; foxes/feral dogs, rabies, Parvo.

How good are the relations with the neighbours?

gani et se
Posts: 222
Location: Douglas County OR
2
posted 11 years ago
A note of caution about some squirrels in N. America. At least grey squirrels and ground squirrels, if I remember correctly. They are reservoirs for fleas which harbor bubonic plague.
Not sure how eating them impacts transmission, but you have to get close enough for the fleas to bite you to skin them

L8Bloomer wrote:
In BC we have the Red Squirrel, or in some parts the Douglas Squirrel. The Grey Squirrel (which, confusingly, can also be black) is the "invasive" species. In some places it has all but "kicked out" the native ones. Flying squirrels are nocturnal and thus not frequently seen. Apparently there are no flying squirrels here on vancouver island. 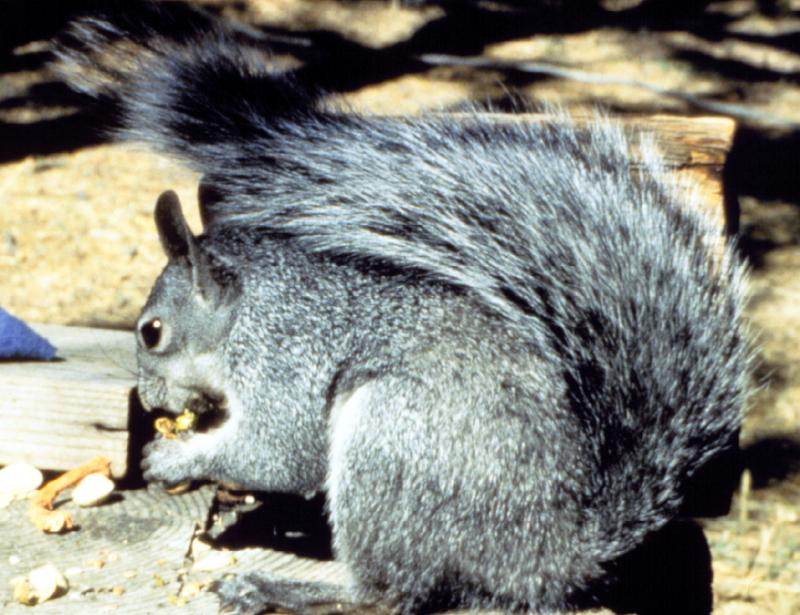 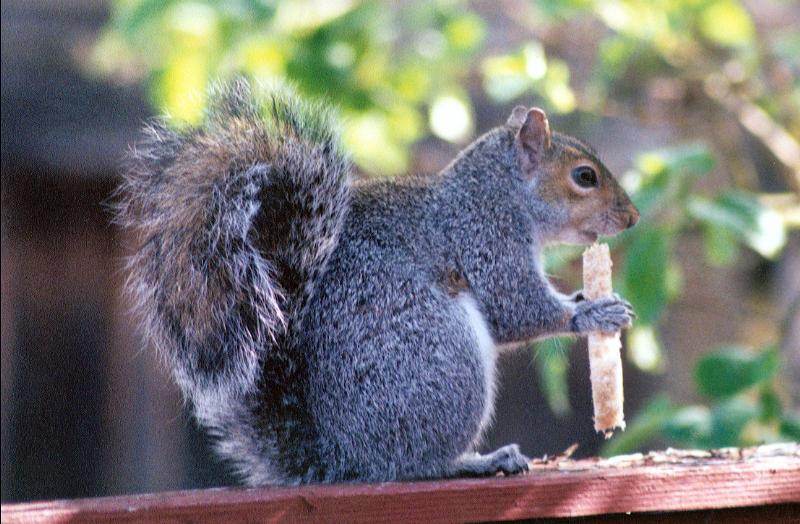 Habitat has been lost to urbanization and other development, particularly in the south Puget Sound area, and to catastrophic wild fires in Yakima County and the Okanogan. Conifer dominated stands of large diameter and mast-producing trees of pine and oak with interconnected crowns are particularly important in the life history of the western gray squirrel. Logging that removes the large mast-producing trees and results in evenly spaced trees with few or no canopy connections reduces habitat quality. Habitat also has been degraded by fire exclusion and historic over-grazing. In the south Puget Sound area oak woodland is being degraded by the invasion of Scot’s broom. Road-kill is a frequent source of mortality for western gray squirrels and is known to be a major source of mortality for the Puget Trough population. Notoedric mange, a disease caused by mites, periodically becomes epidemic in western gray squirrel populations and appears to be the predominant source of mortality in some years. The incidence and severity of mange epidemics appears to be related to stresses in the local population precipitated by periodic food shortages.

Posts: 76
Location: Austin,TX
posted 11 years ago
We had a pet squirrel when I was a kid. Hand raised it after our dog brought it to us...it was tiny.

He, Squirrelly, was great fun. Would run up your leg and hide in your hair...and used to jump on any new guy my sisters brought around and piss on their shoulders.

The fun stopped after he hit puberty. Attacked my mom just out of the blue once. Then later I was trying to feed him some pecans out of hand and still sport a crescent shaped scar from the attempt. Guess it was a good thing I wasn't trying to feed him by holding the pecan between my lips.

They're all muscle, claws and teeth when they're piss so be aware of what you're getting into.

He hung around the property for years but we and he kept our distance.
Posts: 5
Location: Interior Alaska/Middle Tennessee
posted 11 years ago
I've still got one that I'm trying to get to move out on his own. He's not mean yet, but I can see the day coming quickly. I was attacked by one of my Granddad's tree rats when I was a kid. As well as terrorizing me, it tried to drive my Grandmother crazy. The present one will be moving out soon, if we ever get thru the tornado season. It is amazing that an animal that small can hold that much piss, but he has an ample supply, and is generous about sharing it.
John Polk
steward

Posts: 7926
Location: Currently in Lake Stevens, WA. Home in Spokane
333
posted 11 years ago
If you want to breed them, make certain that they are properly married:  shotgun marriage!