posted 2 years ago
Filling rocky channels with brush in a cedar desert near the north boundary of our land.  Cedar deserts occur when poor grazing practices reduce the grass cover so that native Ashe Juniper ("Cedar") can colonize.  Once the Cedar is tall enough to shade out the remaining grass, flood run-off on slopes erodes away the soil to rock.  If the "traditional practice" of set-stocking cattle continues in this kind of ecology, eventually the entire region would become a desert wasteland.
P1080033.JPG 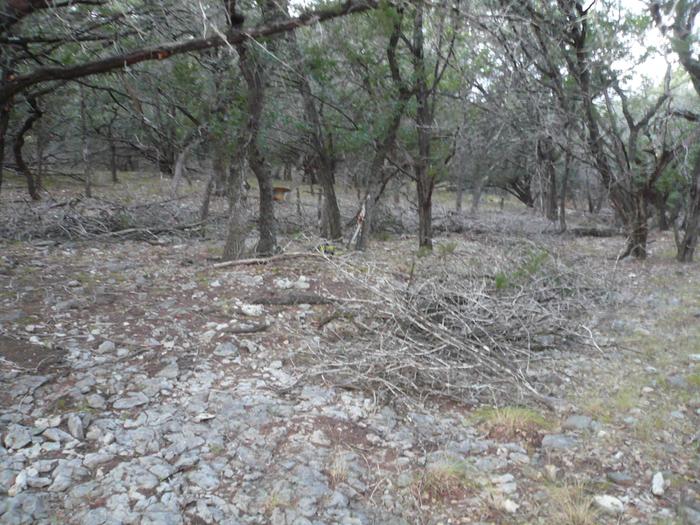 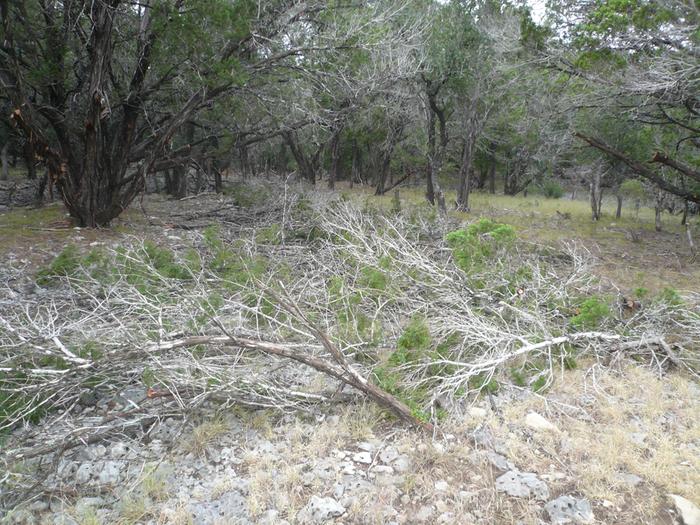 Gray Henon
pollinator
Posts: 508
Location: Appalachian Foothills-Zone 7
105
posted 2 years ago
Awesome thread!  Keep the updates coming! Several years ago, I built a brush dam across an area that floods on our property.  The area is nearly flat, so the water moves fairly slow.  An incredible amount of brush has rotted down since I started.

posted 2 years ago
Thanks!  Yes, it's amazing how fast the brush rots down.  I'm hoping all these piles I'm making will eventually turn to soil and grow some new grass and maybe even shrubs and trees, though with so many deer, most of the young shrubs and trees are being destroyed.  But possibly enough brush might keep the deer away long enough for some trees and shrubs to get established.

posted 2 years ago
Back to brush damming!  Made a biggish new dam across the channel and a little upstream added brush where some trees had fallen into the channel.  I threw over 100 Osage Orange fruits into the brush in hopes of getting a tree or two in the future. 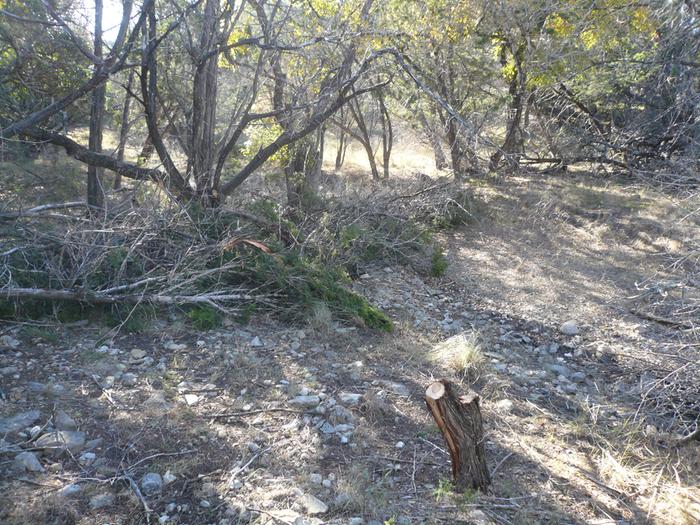 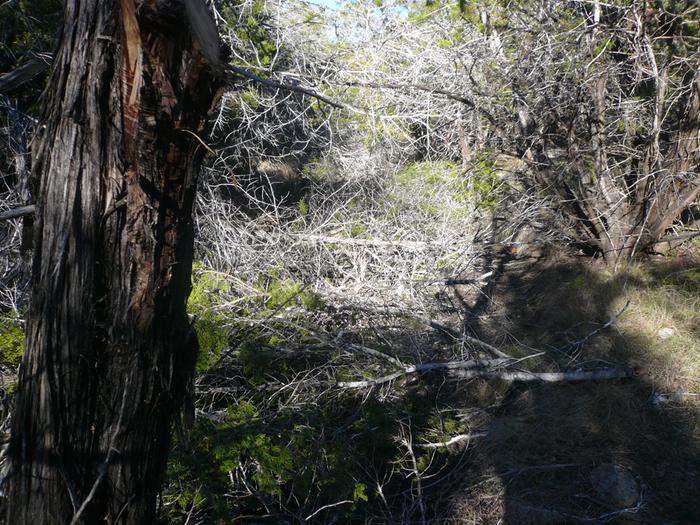 posted 2 years ago
This Jackrabbit sat about 30 feet away the whole time I was chainsawing and dragging brush around.
jackrabbit.jpg 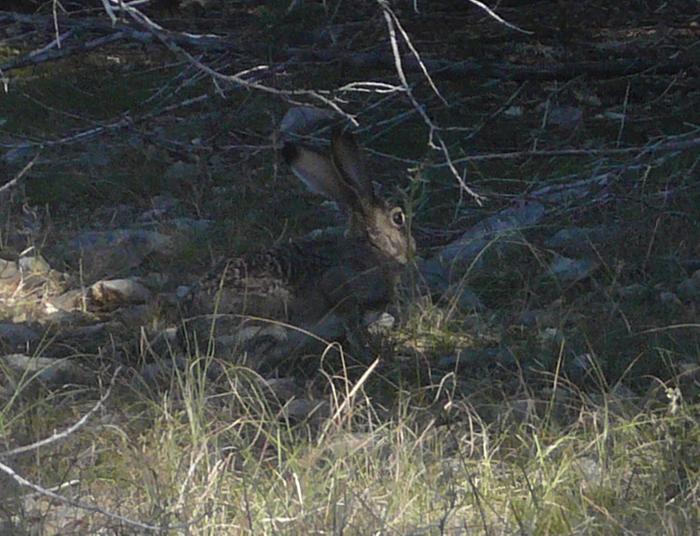 posted 2 years ago
Channel crammed with trees.  Generally I don't like making brush dams this tall and fluffy, but it was easier to fell entire trees and large branches right into the channel than to cut them into smaller pieces.  This will compress on its own over time. 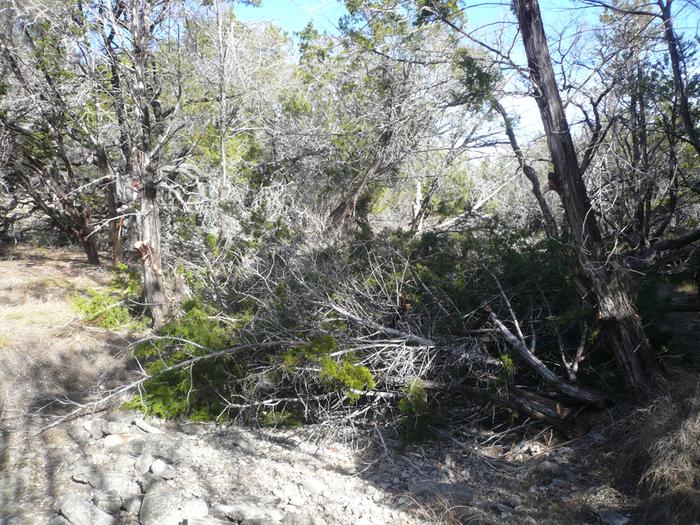 posted 2 years ago
Bags of Osage Orange/Bois d'Arc fruits to throw in the channel.
osageoranges.JPG 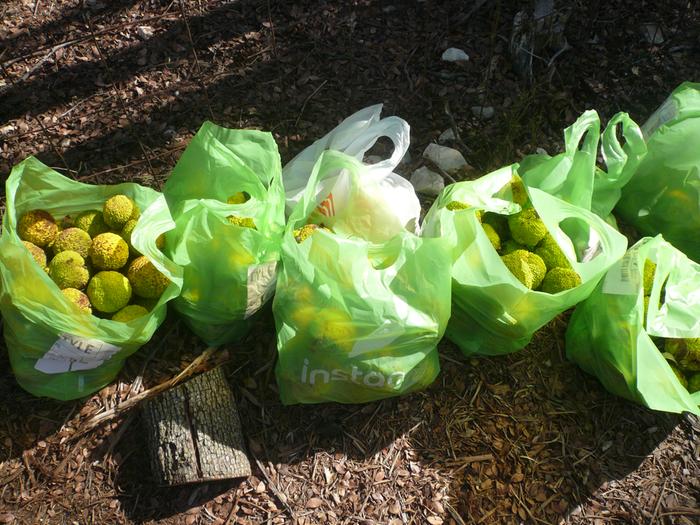 posted 2 years ago
Tyler, are you just throwing the osage oranges whole into the channel and the fruits will break down and release the seed? I'm wondering because we just collected some whole fruits from a local hedge and want to try growing them by us. I've never grown them before and am wondering what is the best/most likely way to promote germination and how much water they need, and/or how regularly. Do you know? Thank you!

"Do the best you can in the place where you are, and be kind." - Scott Nearing

posted 2 years ago
Nature seems to grow them by dropping them and letting them wash downstream and/or maybe critters eat them and distribute the seeds, so I am just throwing them around in brush piles everywhere.  Some seem to be getting partially eaten, not sure by whom.  In the past I have grown them from seeds dug out from the fruits, so, you might want to try both ways.  None of the trees I originally planted from seed have survived - the deer ate them.  If I get even a couple of trees from the hundreds of fruit I'm tossing around, I will be thrilled!

posted 2 years ago
Nice thread. It's good to hear about what works and what doesn't over the long term. Tyler, I see you leave tree stumps when you can to anchor your brush dams to as you said most of the area is down to bedrock. For people with soil for anchoring to here are pics of a workshop I did with Bill Zeedyk this fall where we made brush dams. Old barbed wire fences were deconstructed and the t-posts and juniper posts from them were pounded into an eroding channel. The orange-marked posts are on the upstream side, the green on the downstream side. Junipers were cut and their branches were woven among the upstream posts being sure to bring them all the way to the bank on both sides. The branches were stomped down as they were placed so they hold firmly. The downstream side was treated the same way, then branches were put between the up and downstream sides and also stomped down. Two or three brush dams were built across the channel perhaps twenty feet up and downstream from each other.
I was pleased to learn this technique as my property has no useful rock to speak of but lots of cedar.
Zeedyk-Brush-Dams.jpg
Brush-dam-under-construction.jpg