Cate Weaver
Posts: 16
posted 10 years ago
I'm thinking it would be a good topic of discussion to reveal for each other the disappointments we've had; the things that we would have sworn would be the "perfect" permaculture fix(es) for a situation but, turns out, it failed or at least did not meet our expectations.

I've read all the permaculture books and loads of other gardening books, built a zillion compost piles and spread it in my beds, augmented my soil with compost teas, fostered earthworms, applied manure, mulched deeply, selected appropriate species/varieties, taken all the master gardener classes, etc. yet I still cannot get my yard to look 100% in the depths of drought.  Believe me - I've tried it all but there is no substitution for adequate rainfall.  My August yard never, ever looks like my May yard.  There's no way I can get all the water on my land that it needs in the depths of summer - without going bankrupt or alerting the Water Police.

So, that is my greatest disappointment - despite doing "all the right things," I still don't have the lush and vigorous garden I hope for.  Granted, my trees survive and my irises always some back beautifully, the lawn (as small as it is) perseveres, the fruit sets, but I cannot attain the Garden of Eden [yet] despite all my efforts ... 12 years so far.
Tyler Ludens
pollinator
Posts: 11826
Location: Central Texas USA Latitude 30 Zone 8
1120
I like...

weaver wrote:
So, that is my greatest disappointment - despite doing "all the right things," I still don't have the lush and vigorous garden I hope for.

We've been told you can grow all your favorite plants with no irrigation.

But I don't know the secret.  It is a secret, apparently.


My disappointments are legion.  I have killed most kinds of plants I've tried to grow.  This year of extreme drought, virtually all of my plants have died except those I give frequent irrigation.  Most of my fruit trees are dead, half my almonds are dying.

posted 10 years ago
Regarding summer drought, I think it helps to know something about the plants that grow wild in your area.  If they provide food, use them, otherwise use plants that are close relatives to your wild plants.  Otherwise you are going to have to baby them, which is fine if you are up for that.  Also around here, it is normal for many plants to go dormant in August - thus it does not look like the "Garden of Eden" in August, but all the plants will come back when the rains return in October.

My main disappointments involve creatures eating my plants (mostly slugs and wild rabbits) or tunneling under them, drying out their roots (moles).  So I have been noting which plants they like, and avoiding those, as well as encouraging slug predators and taking protective measures against the rabbits.
Tyler Ludens
pollinator
Posts: 11826
Location: Central Texas USA Latitude 30 Zone 8
1120
I like...

Dave in Camas wrote:
Regarding summer drought, I think it helps to know something about the plants that grow wild in your area.  If they provide food, use them, otherwise use plants that are close relatives to your wild plants.

There's only so much cactus one can eat.

posted 10 years ago
Actually one part of my yard that does look like the Garden of Eden in August is my pond/biofilter.  But I don't have any food plants in there.  I need to look into that - is there a thread on food plants that grow in water?  I know there is a plant that grows wild here called wapato (arrow root) which has an edible bulb.

I do of course have to put some water in the pond in the summer - but that takes way, way less water than keeping a lawn green.

Regarding eating cactus - I don't have much experience with that

.  Did native people live where you live?  What did they eat?
Matthew Fallon
Posts: 308
Location: long island, ny Z-7a
3
posted 10 years ago
u want some rainwater come here, its been raining for 2 days straight..the 1st day we got 9 INCHES !
its not supposed to stop until tuesday.ugh.

im actually building my rainwater harvesting setup now, 9 to 15 55gal-drums that will feed teh garden etc on gravity-fed drip lines guess im a few days late getting it started!

Dave in Camas wrote:
Did native people live where you live?  What did they eat?

Actually there are a few wild foods here that might be available in severe drought:  Sotol, prickly pear, buffalo gourd.  None are that yummy or easy to prepare.

Sorry, I'm just really discouraged by this drought, which might continue for another year.

Dave in Camas, you should definitely move some wapato (Duck Potato) into your pond.  I'm trying to grow it but I think I might have purchased a species which doesn't make potatoes.  I want to try to get the actual wapato species, Sagittaria latifolia to grow in my aquaponics system.

Posts: 2040
Location: Cascades of Oregon
252
posted 10 years ago
Keeping the deer and elk away is my pre fall dissapointment.  Deer apparently like the new grape vines I planted I hope they come back (The grapes).

Posts: 7926
Location: Currently in Lake Stevens, WA. Home in Spokane
329
posted 10 years ago
Ooh, how I wish I had an elk "problem"  If I did, it would quickly turn into a "I need a bigger freezer" problem.  LOL  Probably my favorite game meat.

Posts: 3999
Location: Wellington, New Zealand. Temperate, coastal, sandy, windy,
105
posted 10 years ago
A biggish disappointment, and one of few that's not related to "man I'm disappointed I didn't do  X, Y and/or Z when I knew I needed to", was getting a very high reading on the lead test where  my 'lawn' was.
But I'm glad I even thought to have it tested and I learned a lot about the health risk of heavy metals in soils and my comfort-levels re lead and growing food.
I've decided I'm ok with growing fruiting plants there, as lead only tends to be a problem when the soil is disturbed.
No potatoes out the front then.
Posts: 43
Location: Pennsylvania, Zone 5B
posted 10 years ago

Dave in Camas wrote:
Actually one part of my yard that does look like the Garden of Eden in August is my pond/biofilter.  But I don't have any food plants in there.  I need to look into that - is there a thread on food plants that grow in water?   I know there is a plant that grows wild here called wapato (arrow root) which has an edible bulb.

I read about all of those but I returned the book to the library so I can't tell you any specifics. I wasn't very interested in these because I don't have a pond.
Guy De Pompignac
Posts: 192
Location: SW of France
1
posted 10 years ago
My chooks don't eat snails or slugs, and dont lay eggs since we got them (2 weeks) ... but we still hope

Brenda Groth
pollinator
Posts: 4437
Location: North Central Michigan
29
posted 10 years ago
Weaver I too am so disappointed with the droughts we have had in July and August the last several years..must be a new trend.

we have fairly wet springs and sometimes wet falls..but summer..dang if it hardly ever rains.

there are very very very few areas i can mess with irrigating..i do irrigate my greenhouse, but also have a soaker hose running to a way back baby food garden area like forever away from our house..and it uses the pump a lot to run it..so i don't do it often, but I know if i did i would have a lot more fruit !!

Next year I'm going to suck it up and run it at least every other day if we don't get rain..i'm tired of withered up plants

weaver wrote:
I've read all the permaculture books and loads of other gardening books, built a zillion compost piles and spread it in my beds, augmented my soil with compost teas, fostered earthworms, applied manure, mulched deeply, selected appropriate species/varieties, taken all the master gardener classes, etc. yet I still cannot get my yard to look 100% in the depths of drought.

I don't see anywhere in your list a reference to a rainwater tank or cistern... do you have one?
Isaac Hill
gardener

"To oppose something is to maintain it" -- Ursula LeGuin

Posts: 508
3
posted 10 years ago
If you can't do such things as swales and hugelculture  then you might look into wicking beds. Developed in Australia to deal with droughts they seem to cut down drastically on the amount of water used.  Not much help for fruit trees but for a veggie garden that might be the answer. Maybe get some barrels and fill them in the spring when you have lots of water and then use that for the wicking beds through the summer.
Xisca Nicolas
pollinator
Posts: 1981
Location: La Palma (Canary island) Zone 11
I like...

posted 9 years ago
I was disappointed to learn that the nice animals I liked very much as they are supposed to eat insects, are not pure carnivores!
Lezards DO eat tomatoes and other little fruits.
They DO eat all the tiny sprouts coming out.

I know people who do not sow anymore their carrots! they transplant them after sowing in pots!!!

A very nice local bird, insectivore, loves my persimon in the fall...

So, get the animals to read books!
Or get writers to read nature better!

Jordan Lowery
pollinator
Posts: 1528
Location: zone 7
18
posted 9 years ago
Why do you want your may yard to look like your august yard? Natures systems are dynamic andeach season has it's own look and feel for a reason. If my august looked like may i would be greatly disappointed with the static state of it all.

Turn problems into solutions, problems can be anything. we haven't had rain since may here, yet my crop of amaranth livens up the landscape with it's vibrant colors and the tremendous amount of life it brings to a garden.

Dissapointments are the pathways to new possibilities and ideas.

Alex Ames
Posts: 415
Location: Georgia
16
posted 9 years ago
You can't hang on to anything in the garden. It is moving rapidly through it's natural cycle.
Kate you sound like a good gardener but trying to get things to look awesome all the time
is a source of disappointment more than how the garden actually looks.

I am not going to say it has anything to do with permaculture but this year I started 15 varieties
of heirloom tomatoes from seed. My research had led me to varieties that were supposed to be
big producers. I started enough plants for me and gave away a huge supply to 5 or 6 different
families. Just in case I had crop failure, I could eat some of theirs and vice versa. Well it got up
to 105 degrees for nearly a week and the tomatoes were never the same after that. We all got
some tomatoes but my plans and efforts were far larger than what turned out. I was the only
one of the people growing these tomatoes using permaculture methods. Results were slightly
in my favor over what they got using traditional growing methods.

The attached tomato photo was handed to me at church by one the families I supplied plants to. He was
proud as a peacock at that point. He said he was going to have enough to feed everybody in town.
A week later his tomatoes had "taken a turn for the worse", now that was disappointing.
DH-tomatoes.jpg 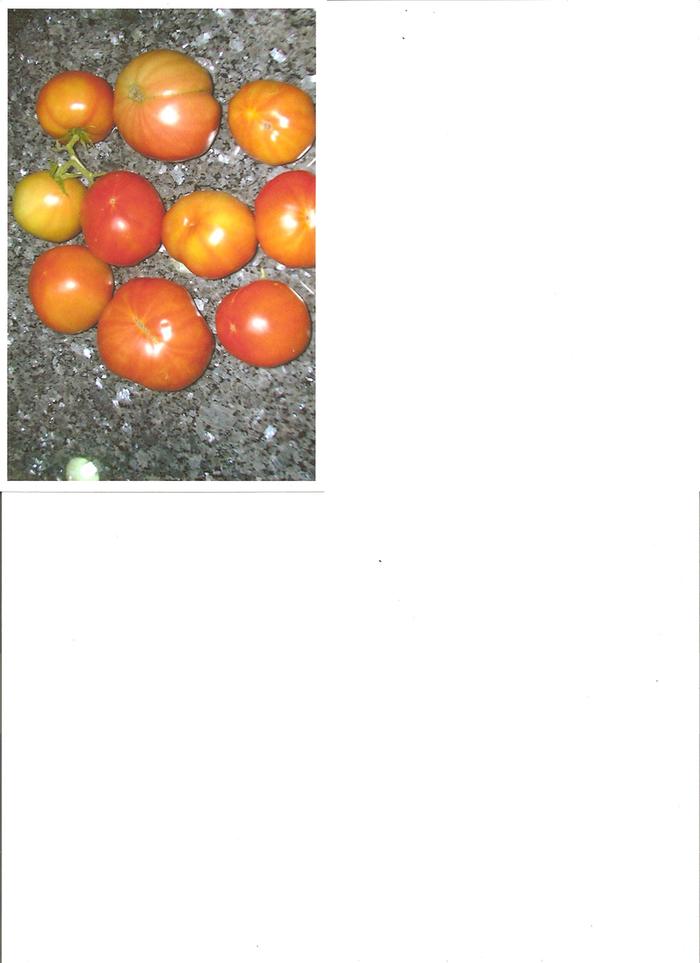