AN ABSOLUTE MUST READ BEFORE YOU BUILD A CHICKEN COOP 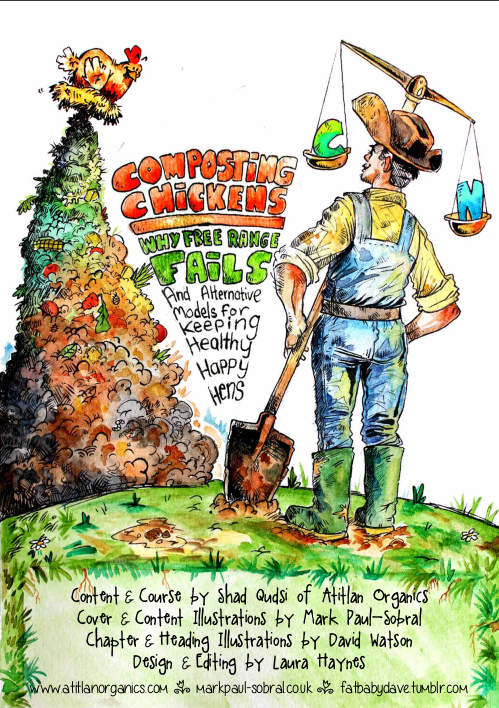 Here is the deal. People love to talk about free range this and that. "Oh, my hens have soo much free range."

How many people have been in this situation:

PERMIE FRIEND: Hey, you want to come check out my chickens?

ME: Sure, I love chickens. Cluck Cluck!

We pass through a lush meadow with a rich, functioning ecosystem towards the 'free range' chickens yard. As we approach, there is a strong fowl smell.

PERMIE FRIEND: Here they are! They have this WHOLE area to free range. Surely there is at least a 1/4 acre fenced in here for only 20 hens. That is way less than the recommended free range space.

ME: True. But why does it smell and how come there are so many bald patches? It looks like there is much less vegetation and what is left has its roots all scratched bare.

It had just rained and there are standing muck puddles around, flavoured with chicken turds.

PERMIE FRIEND: You know, its true. This chicken area is pretty worn down. And its kind of gross to come out here after rains. Its also dusty when it gets real dry.

ME: MY friend, I am sorry to tell you, but your chickens have destroyed the actve decay cycle. And we need to act fast to solve this once and for all!

Uncontrolled Free Range will always lead to the breakdown of active decay cycles over time. This means sad land and sad chickens. Then sad you.

It doesnt matter the size of your free range. Even if they have no fence at all, if the hens have a stationary house and unlimited access to range, they will over-use the area all around the house, and under-use all the far lying sweet spots.

But rest assured. The Super Sweet Composting Chickens Illustrated eBook has everything you need to get right with the chickens. Simple principles of the chicken ninjas, long forgotten, can be yours again!

The Free Range Alternatives provide solutions for
- The homesteader looking to improve their chicken set up and integrate it more richly into the other activities
- The suburban or urban ninja who cant provide any outdoor access to hens
- Anyone who is also interested in compost. And come on, who isnt?
- Super fun for kid or adults of any age. print it out and share it around! 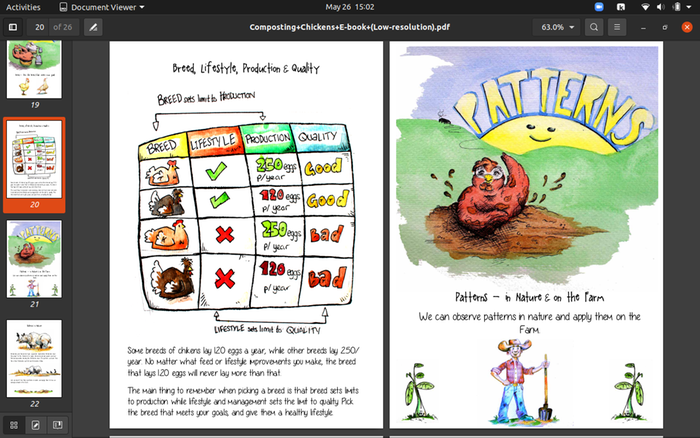 What others are saying:

"The information in it is very understandable and well explained. It explains the basics of composting and the reasons behind their methods really well. I will definetly be applying this knowledge to my chicken-keeping!" Nicole

"This will totally change the way I manage my hens. Super great info on the failure points of free range systems, which most people dont talk about. I am looking forward to trying the rotated yard alternatively, which is clearly explained in the book with loads of great illustrations." Colleen

BUY NOW and get the Illustrated Intro to Permaculture Notepack for Free!


What you get:
- Composting Chicken Illustrated eBook
- COMPLIMENTARY Illustrated Intro to Permaculture Notepack

GET YOUR BOOK TODAY!

I really learned a lot out of it, and have noticed similar things with my flocks of chickens and ducks. Ducks, like chickens, tend to hang out a lot in their favorite areas, and poop there a lot, too. Usually, if I don't have too many ducks, this isn't a problem, as the grass usually likes the extra nitrogen and it's never too much. But, right now they've been staying near the house to be safe from predators, and the area has gotten quite poopy. While ducks don't tear up the ground like chickens, so the grass is still doing fine, it is starting to stink from the lack of relative carbon.

I love how well drawn this comic is. The pictures are very nicely drawn and pleasing to the eye, and they do a fantastic job of illustrating the concepts in the book. I don't know if I would call this a comic, because it is so much higher quality. It's more like a well illustrated handbook.

The information in it is very understandable and well explained. It explains the basics of composting and the reasons behind their methods really well. I will definetly be applying this knowledge to my chicken-keeping!

The comic goes into three methods for keeping chickens without them causing too much destruction: tractors, rotational paddocks, and a composting coop. I'm wondering if there could be a fourth, too. Right now, my chickens have the area surrounding their coop filled with wood chips. I throw in veggie scraps and weeds in there, and they tear it all up and have a great time. There's no chicken poop smell because of all the carbon and happy soil/compost microbiota. In the area away from their coop, they still have plenty of green grass and weeds to eat. I've only had my four chickens for half a year now, so I can't speak to how long this will work, but I'm wondering if there could be a mix of large run/free range with a composting coop and area around their coop?

posted 2 years ago
Super informative, comprehensive look at the healthiest way to keep hens that no one is talking about. Highly recommend!!

Rose Bugler
Posts: 5
2
posted 1 year ago
is there a way of buying this from the Uk?
William Bronson
gardener

posted 1 year ago
Looks good.
I had my chickens free ranging my entire backyard for years.
This resulted in death for every annual plant they encountered.
Now I restrict them to the perimeter, including the 20 foot long compost pile.
They spend most of their time there, and seem just as happy as before.

Nicole Alderman wrote:
The comic goes into three methods for keeping chickens without them causing too much destruction: tractors

There is a presentation, i think it was by Paul, that says how bad chicken tractors are for the chicken.
I mean they are are forced into an small area picking their food between their excrements,
that can`t be animal friendly.

Does the book deal with the core of the free ranging problem,
i.e. that Chicken are forrest animal and not suited for a lawn/meadow?

The free range chicken i see are mostly on a lawn/meadow, however when they are put into a food
forrest things seem to work out.

posted 1 year ago
The book does a really great job of explaining that it's the lack of carbon that causes most of the problems. A forest has a lot more carbon than grassland, so that could be why chickens free ranging in the forest don't cause as much damage. It's been a while since I looked through the ebook, so there might be more to it than what I just mentioned.

As for Paul on chickens, he has an article on Richsoil.com as well as a bunch of videos on his youtube channel. Here's one about free range chickens:

posted 1 year ago
I can relate. I gave my chickens a run that I thought was more than enough and they ate it down into slop in no time flat. Learning that they are forest critters has me thinking that I've got them in the wrong place. I mean, they eat ev-er-y-thing. They eat the roots of plants growing on the other side of the fence, after they've devoured everything on their own side. The way that they interact with their world is almost purely by eating it (the world). Chickens are voracious, but I and my dog do enjoy eating their eggs. So we gotta magic up a new way.

"Things that will destroy man: Politics without principle; pleasure without conscience; wealth without work; knowledge without character; business without morality; science without humanity; worship without sacrifice." -- Mohandas Gandhi

R. Han wrote:
Does the book deal with the core of the free ranging problem,
i.e. that Chicken are forrest animal and not suited for a lawn/meadow?


This video shows chicken on a farm with poplar trees. Even if you don't know german,
you will clearly see that chicken prefer to be close to the trees to being in the open.

📦Buy this as a gift!
Boost this thread!
permies Affiliates Program
Click here to learn how to be an affiliate for "Why Free Range Fails - Composting Chickens Illustrated (e)Book: Alternatives to Free Range", and start earning 40% of the sales it makes!
Similar Threads
More...