How do I make a roundwood pergola?

I just finished making a garden bed to grow hardy kiwis and I want them to grow up and over the playpit. I'm thinking the easiest/cheapest way to make a sturdy trellis would be to use WesternRed cedar trunks from smallish trees.. I'm thinking of making something like: or (without the fancy sides)

But, I've never built anything, unless you count a mallet. Do just use giant nails to hold it all together, or carve the spiffy peg ends on the upright wood and stick them into holes in the logs that are perpendicular to the ground?

Mike Lang
Posts: 25
3
posted 2 years ago
Perhaps not what you want - because you are only covering a small area, how about a live willow dome like this - https://www.gardeningknowhow.com/wp-content/uploads/2016/07/willow-dome.jpg

Alternatively, this youtube channel is making a large roundwood shelter that you might me able to glean information from -   [youtube]https://www.youtube.com/channel/UCWxUfOOYZDnSfwFn-m1MF6A/videos[/youtube]
Nicole Alderman
master steward

posted 2 years ago
Thank you, Mike! I'll take a look at those videos today. 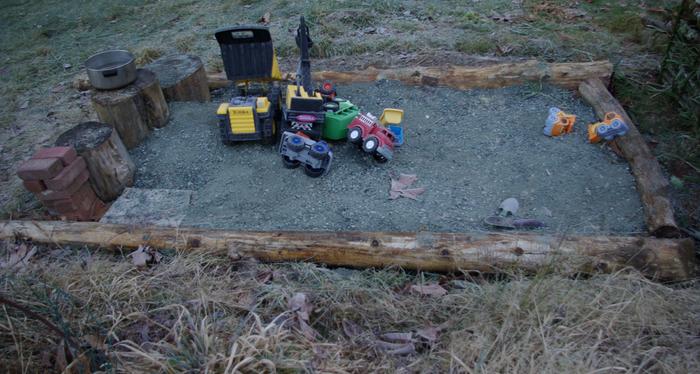 Aaron Yarbrough
Posts: 52
Location: Austin, Texas
26
2
posted 2 years ago
I built a roundwood pergola in a workshop. Here's a link to some pictures. We cut pretty simple box joints into the timbers and secured them with timber lock screws.
D Nikolls
pollinator
Posts: 1685
Location: Victoria BC
255
posted 2 years ago
The first one is very nice. It would take a long time!

The second one is very quick, it won't last a long time!

General stuff:
Do take the bark off. Especially with cedar as it's so easy to peal.

Ideally take the trees/poles down in the spring as the sap begins to flow to make peeling even easier.

Do get the post bases up off the ground, ideally... even cedar rots out in the PNW.

Do lots of bracing, like the first picture. The braces should be in line with the posts/beams so the force transfers nicely. The second picture has slapped diagonals against the side of the post and used a fastener which will now have all the force transferred through it, in a bad way. Fasteners are fine, as long as they're good ones, but this is a bad way to use them. I have seen snapped structural screws even in tiny structures when used this way, as the force on them is enormous.

Because this will presumably not have a roof, it would be nice to avoid fasteners on the top of the top beams, as this would be a nice spot to catch water and accelerate decay.

I recently read Rob Roy's 'Timber Framing For the Rest of Us'. It was full of things I've learned already, sometimes the hard way... but still a fun quick read like most of his stuff, and had interesting ideas and bits of data I hadn't seen before.

It would be a great read for somebody just starting with this stuff!


Have fun, building this sort of thing is awesome and your kids will love climbing on it!

posted 2 years ago
We've made some progress on the trellis-thing! My son wanted it to not cover his whole gravel playpit, and we were running out of good cedar to use, so we're making it a triangle shape. Some of the vertical beams are a bit...funky. They were cut 6 years ago and we didn't know to debark them. Lesson learned! Hopefully now that they're debarked, they'll decompose slower and since they're so thick, they'll hopefully last...

posted 2 years ago
For the horizontal you could cut off the posts to the same height and then half lap the horizontal pieces and run a Timber screw down through them into the top of the post. That would be pretty quick.

I would work out some knee bracing myself. To top it, well, hmm. Reciprocal frame? (1) Or you could just run "rafters" perpendicular from the heaviest cross beam to the others and trim them.
(2)Continue making smaller triangles spiralling in?
Roof-options.png 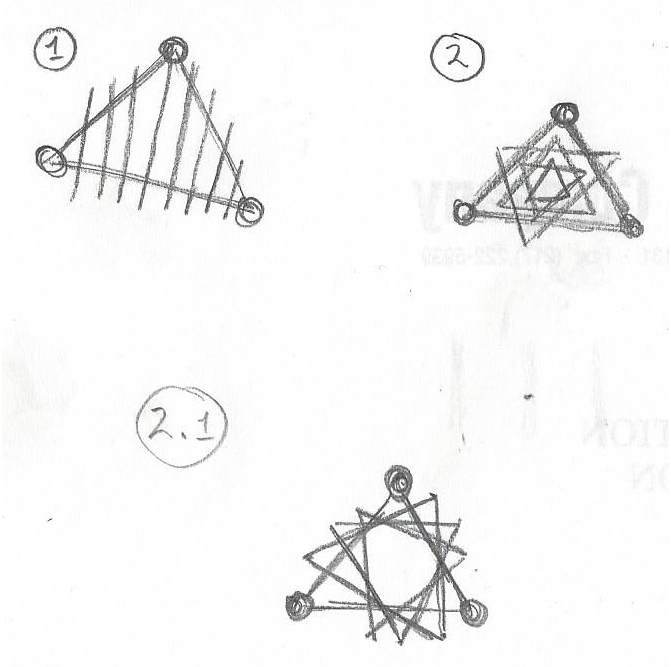 posted 1 year ago
I think it might just be finished! I did the triangle design, and then used the branches that were still on the poll (I'm glad I didn't cut those off!) to weave some extra stability and shade into the "roof." Then I added some more fresh, peeled cedar to weave some more branches up there.

We ran out of small cedar trees on our property, but there was one that was left by loggers near our neighbor's driveway, so we asked and they said we could have it! So we carried it 1/2 mile home. I used my grandpa's old drawknife to take off the bark from the tree felled 6 months ago. I then put it in the middle for the kiwi to be trained up onto. 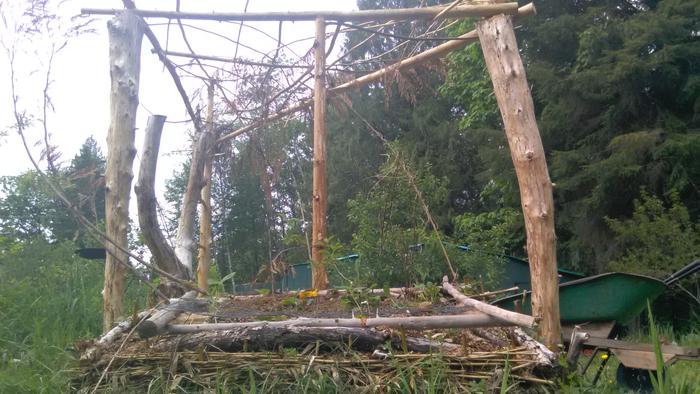 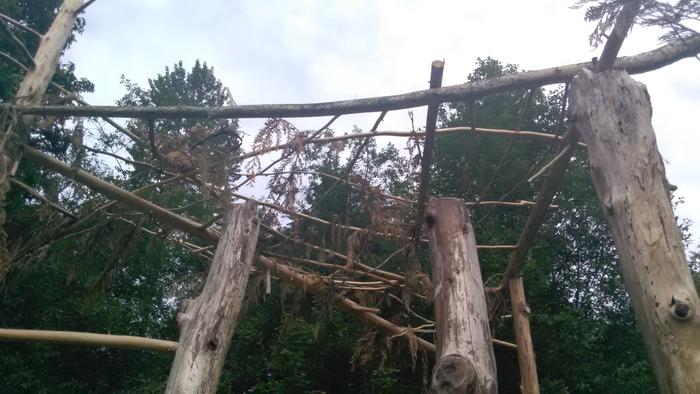 Devin Lavign
pollinator
Posts: 1048
Location: Pac Northwest, east of the Cascades
294
I like...

posted 1 year ago
Loving your work Nicole. Awesome round wood work and for such important little people. They will have some great memories of the work you did for them.

posted 1 year ago
Glad to see this in action! Our subdivision suffered a ton of tree damage from a snowstorm a few days ago (Colorado Springs is definitely gardening hard mode) and I invited neighbors to drop off branches they didn't want. We now have a brush pile taking up about 2/3rds of our back yard, but there are a fair number of good poles in there once we get the side branches mulched and I'm hoping to use them to build a trellis/shaded seating area. I just added "Timber Framing For The Rest Of Us" to my shopping list. Any other books that people have found helpful?

posted 10 months ago
Thank you! I bought two new kiwi plants this year, and they're doing much better than the other one, and have already grown taller than me and almost reach the beams of the pergola. I'm excited for this to be generating shade soon!