Shading plants: tips and techniques. Summers getting hotter and drier.

posted 2 years ago
Shading plants seems to be getting a thing where i am, it used to be the more sun the better, but with this much drought, hardly a drop for two month, plants just stop growing. Two month is bad here, i know very well people on Permies live in places where 4 or 8 month no rain is normal, it doesn't matter, it is becoming more of an issue everywhere i recon.
i came up with a little technique for planting seedlings in the heat which i like to share. And i'm thinking of setting up living shade screens of grapes that i will let grow wild in hot summers and trim down in colder summers. And i'd like other people to share their thoughts and ideas on how to protect plantsfrom too much sun during drought.
Firstly the technique to shade newly planted seedlings of whatever kind. I make a hole, dump water in it, dig out a bit more to get the roots in as deep as possible, close the hole a bit lower than surrounding earth so water flows into the hole towards the plant. Then do all the seedlings i want to get in and cover them lightly with straw, just sprinkle it all over, lightly, so the leaves still receive some sun, but not the whole load and wind doesn't get to the leaves as it would otherwise. I've done this in a heat wave with salads and it worked fine. Mostly all established. I watered daily for a while. When the plants seemed established and in the growing mood, i moved the straw to the side of the leaves and mulched more around, or removed the straw more or less for use somewhere else.
The second technique i am going to imply next year is setting up racks of interconnected poles for vines to grow on and climb into. I am going to use hazel tripods which i screw together and i am going to see how many Acacia pseudorobinia poles i can get my hands on and bang those in creating shade/windblocks. That was the other thing, where i live normally there is not a lot of wind, but this year in the midst of record temperatures, a scorching strong wind started to blow for days literally sucking the life out of everything it touched. This wind was howling around my house while i was trying to hide inside.
So by creating rows of vines growing on my plot of land i hope to create shade and block wind. In summers that are cooler i will just cut the grapes shorter and in the hotter ones i will let them run wild and crazy. It's all mulch sur place in cooler summers and in hotter summers i'll have more grapes for juice wine and vinegar. I'm also thinking of layering some wisteria since it's a nitrogen fixer and grows super rapid. Maybe i'll plant them together with the vines and keep cutting them back. Another Permie i know told me Wisteria is poisonous, but for how long i don't know. I guess it all breaks down in the end into food for microbes and mycelium.
lettuceseedling.jpg 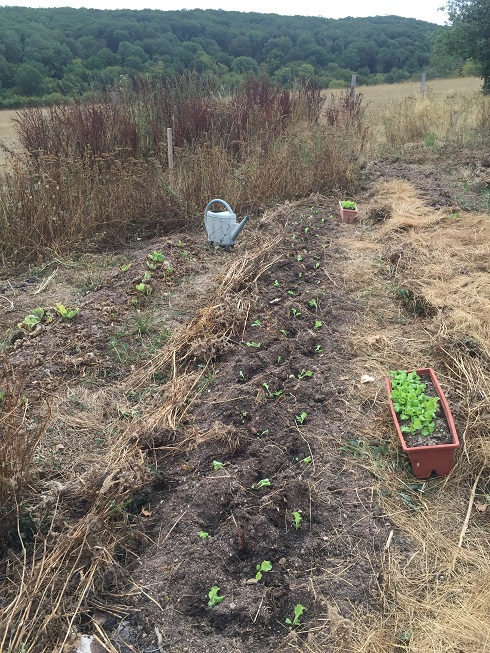 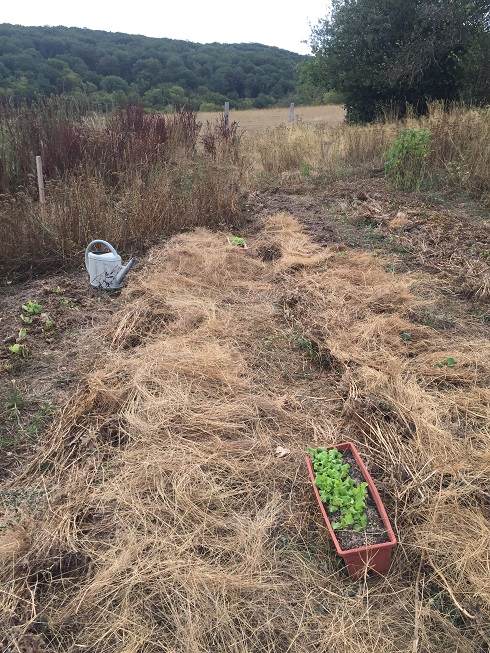 I always shoot for morning and mid day sun but afternoon shade.

The last two years have been the opposite. Cooler than normal with more rain than normal, even in July and August when it usually doesn't rain at all.

For me, it's just a matter of not cutting down certain trees because I'm carving out a homestead in the forest. If you're working with an open area already, plant some drought tolerant shrubs and/or trees to give afternoon shade.

posted 2 years ago
That's interesting, some of my potatoes were shaded in the afternoon, they popped up quickly and are growing great, without much watering. The ones in the full allday sun hardly bothered showing up. Why is that?
I have planted a dozen peach trees, a dozen reine claude plums, mirabel plums are coming this winter ,hazel nuts, rows of willows, topinambour/sunchokes, nitrogen fixing shrubs like siberian pea shrub and goumi. I'm planting mini hedges of herbs , all as wind blocks, attracting insects, bees etc. I've had a big peach tree next to my veggie patch, but in normal years it seriously diminishes growth, so i don't want them criss cross through my field. Therefore the idea to have an adjustable sun block stuck with me. This was just for the beans to grow on, i'll make solid ones that last five to ten years.
racklight.jpg 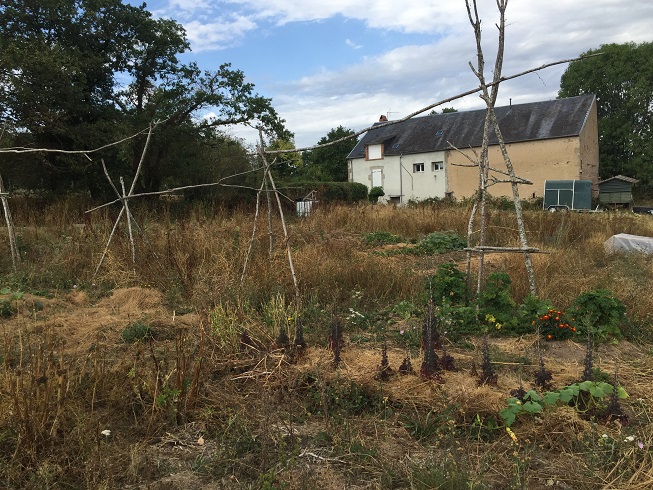 posted 2 years ago
I'm planting Moringa trees throughout my kitchen garden for dappled shade.  They have the benefit of being a very productive food crop as well as shade providers, and are doing exceptionally well.  If I can find an efficient way of protecting them through the winter this should be a winning strategy. 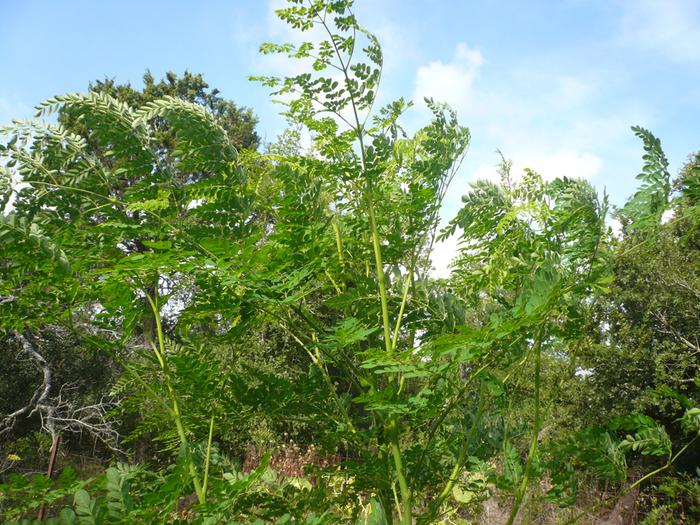 Stacy Witscher
pollinator
Posts: 1130
Location: Southern Oregon
305
posted 2 years ago
I've planted a pear tree and an apple tree in my garden. The sun is so strong that the grape leaves are getting sunburn, and the grapes just shrivel on the vines. The afternoon sun is shaded by two oak trees in some parts of the garden, I'm adding more beds to this area to hopefully use for cucurbits which don't like that afternoon sun. I've tried using trellised plants like beans or peas to shade other plants, but almost everything has to be under bird netting so trellises are a pain.

posted 2 years ago
Scattering straw over transplants as Hugo describes is something I do with my tomatoes when planting them out. If I don't have suitable mulch, I'll pull up some bracken and poke it into the ground where it will provide some shade. Works well.

This year, one of my squash beds (previously a tomato bed) is full of tomato volunteers. I just let them grow into a tangled tomato squash chaos. The squash in that bed wilt far less in the sun than the squash in tidier beds.

In one of the gardens on the south side of the house where it gets wickedly hot, my ground cherries were on the verge of dying. The bed also has melons which I don't want to water, so the ground cherries were getting sacrificed. As an experiment, I pulled some of the mulch away, scattered millet seed and a bit of water just to get them to germinate. Replaced the mulch and forgot about it. Now I've got a nice thick carpet of 4cm millet around all my ground cherries and they seem happier. The bed did get some unusual rain earlier this month, so we'll see how it goes now that it's hot and dry again.

I get the feeling that having the ground covered by something living, not just mulch, might be the key. With an IR thermometer I was getting readings of 60-80°C on the surface of the woodchip mulch on my south beds.  That's a lot of heat that would be radiating off onto the surrounding plants. Even the wiltiest plant was only reading in the 30s. That's a much more pleasant neighbour.

I'm way too lazy to deal with shade cloth, and I need all the sun I can get in the shoulder months, so I'm leery of putting in any shade plants. I'm hoping my chaos beds are the answer ;)

I've thought about using sweet potato in my food forest for just that reason actually. I want something to kind of go crazy and smother out more unwanted stuff.

The deer love them here and will devour the leaves if they can, so I'll have to hide them amongst the polyculture to hopefully get them going.

I've heard that leaving them unharvested can also be a great way to add organic matter to the soil.

I'm probably going to introduce some mint too soon and let it go wild in the food forest. I've heard it can reduce pests too which is always welcome.

posted 2 years ago
I can't conceive of how one can have a food forest with deer in it!  The deer here mow everything down....

Oh, to have problematic amounts of sweet potato ;p

Do you notice a benefit to other plants having it there when there's hot sun?

I like the idea of using plants that aren't necessarily a traditional ground cover - like my tomato squash combo. Maybe crowded plants are what's having the effect?

I've only been dealing with no running water for the last few years, and hadn't put any effort into managing water stress before that.  This is the first year in this location I've had enough garden beds to be able to observe differences between different beds of the same crops. I'll have to see if anything I saw this year will replicate next year.
Tyler Ludens
pollinator
Posts: 11809
Location: Central Texas USA Latitude 30 Zone 8
1116
I like...

posted 2 years ago
Yes, the plants surrounded by the Sweet Potato don't wilt as quickly as those in the open.

I'm probably going to introduce some mint too soon and let it go wild in the food forest. I've heard it can reduce pests too which is always welcome.

My husband has a horror of mint (hmmm... new collective noun?), imagining it will take over our property. I would be quite happy to have something other than bracken take over, so I've been surreptitiously spreading all kinds of seed he'd disapprove of, including mint.  It's pretty dry, though; I've yet to see any

Tim Kivi
pollinator
Posts: 362
80
posted 2 years ago
South Australia has drought every summer. Very few plants do well here in full summer sun; at best they survive but don’t look healthy. But my plants that get just a few hours morning sun then shade the rest of the day do pretty well.