When is American Hazelnut ready to harvest?

posted 1 year ago
My backwoods may be filled with undesirable foliage but it does also contain a ton of wild hazelnuts, many growing right along the main path. Being new to actually harvesting wild edibles though, I'm not sure when they're ready to be picked. I'm looking for a picture of what a "ripe" american hazelnut looks like as the internet has yielded no consistent results. They're starting to turn brown in the centre now, the fringes are still green, but every time I pick one to pry it open it's full of little black holes from insects getting in. Do they still need time on the bush to develop or should I just start picking them now?
hazelnuts.jpg 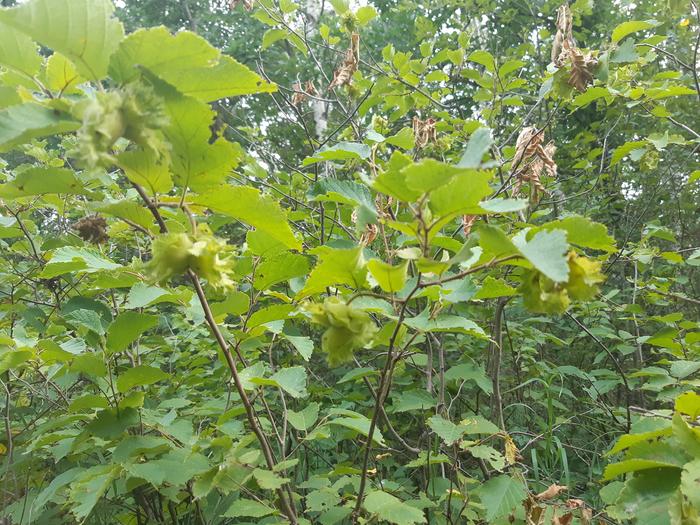 posted 1 year ago
I don't have a picture to show but do know from our own orchard containing about 60 hazelnut bushes that the outer sheath turns almost entirely brown and the nut pretty much falls out with just a little encouragement. This may be an ideal time to harvest, but when it comes to competing with the wildlife, there may not be much left to harvest if you wait this long!
I have picked them a little green and set them aside to dry and it still produces a nice nut to eat but just requires a bit more work to remove the husk later and keep them from molding if they are packed too tightly together before completely dry.
Not sure about your bug problem. We don't spray ours and have never seen what you described but have had years where you crack a whole bunch open and there's not nut inside.....like maybe it was never properly pollinated.

posted 1 year ago
Oh they don't get any treatment of any kind, these are growing wild - I'll start bringing them in though before the wildlife gets to them, thank you!

posted 1 year ago
I get the bugs here too.  If there's a hole, it's the worm leaving the nut.  Haven't figured out a way to tell which ones are good vs bad.  Maybe floating them in water would be a way?

If you pick them early, let them dry somewhere the squirrels can't find them and be prepared for hundreds of worms to appear.  IE don't do it in your kitchen.  But the chickens love the worms.  Some day I might hang bags of drying nuts in the chicken run so the worms can directly feed the birds...

posted 1 year ago
So, after many hours of scouring the internet and my woods, I've found:

1) Hazelnuts (usually) ripen faster than most other nuts, usually ready by mid/late summer to early fall (between mid-July to early September depending on climate and species/cultivar)
2) American hazelnuts can be picked when the involucre (outer casing) is starting to turn brown up until it has completely turned brown and peeled back, but by this point wildlife or pests will likely have gotten to them. The nuts can also be eaten raw when still green, apparently.
3) Twist or snip them off, don't yank off the branch
4) If they have holes in them, they're already been munched by worms and should not be eaten (by humans)
5) Test the rest by placing them in water - if they float, they're duds
6) Place them on a rack in a dry area to dry for a couple of weeks (or 2 to 4 days in a dehydrator)

The most useful reference material was https://ouroneacrefarm.com/2013/09/03/hazelnuts/ - lots of pictures, goes through the whole process, links to other material throughout, and an informative Q&A at the bottom.

posted 1 year ago
That sounds like good sleuthing Heather!  Around here it seems like the hazelnuts are ready to pick about as the blackberries are midway through their season.

I didn't know about snipping or twisting them off, I wonder why that's recommended.  Snipping would take forever.  I have had ripe clusters fall off as I pulled neighboring clusters off a bush.  Maybe that's why??

posted 1 year ago
I filled a 5 gallon bucket with them last night and had to give up on the twisting, it just took too much time. I think the twisting/snipping was a commonly recommended technique for beaked hazelnuts (which have sharp hairs on them, yanking would just embed them in your hand), or for hazelnuts growing in an orchard where you want to cause the least damage to the shrub possible, or for people who didn't like the feel of american hazelnuts. That said, I doubt even when I yanked off a cluster of nuts along with a twig and a couple leaves that I caused anywhere near as much damage as a deer or bear would have.

After picking them they got dumped in a sink of warm water, husked with the husks and any floating hazelnuts thrown in the large metal bowl for the compost (no chickens here yet), and the nuts that stayed at the bottom of the sink (shown in the white bowl) are currently drying over a lined box. Any little grubs that emerge will get collected in the box and go to a friend's chickens if they emerge in a large enough quantity.
received_321635865282119.jpeg
received_504868956947317.jpeg
Mike Haasl
master steward

posted 1 year ago
You're on your way!  It's hard to tell from the picture, but if any of the hazelnuts have small round holes in them, they probably won't be good.  Before you dump the floaters, I'd crack a dozen open and see what they look like inside.  Maybe the same for the sinkers and the ones with holes in them.

Mike Jay wrote:You're on your way!  It's hard to tell from the picture, but if any of the hazelnuts have small round holes in them, they probably won't be good.  Before you dump the floaters, I'd crack a dozen open and see what they look like inside.  Maybe the same for the sinkers and the ones with holes in them.

I only managed to process about 1/4 of them last night but I'll crack open a few tonight when I finish the rest and see how they're looking - I'm going into this assuming about 5% of what I picked will be edible for humans. If I'm finding a lot of live worms I'll likely just give the infested hazelnuts to my friend's chickens as well as whatever crawls out from the drying rack.

When we last checked in I was in the process of husking the hazelnuts, and had finally separated the obviously inedible ones from the possibly edible ones. I set up a drying station which consisted of the nuts spread in a single layer on top of paper towel over top of an open camping cooking rack, propped open with a glass and a paper towel roll, with most of the edges leading to a towel-lined box so the grubs would emerge, crawl off, and be collected somewhere they couldn't chew through to escape. While they were drying, I took a random sample of 12 nuts and smashed them open - 1 in 6 were edible, the rest had been chewed through by grubs to some extent. At the very least, it's easy to tell the edible ones apart from the inedible ones due to colour, texture, moisture, and probably taste (that said, I didn't eat any of the inedible ones so I can't confirm that but I think it's safe to assume).

After two weeks, the grubs were bagged up and given to some friends in exchange for some fresh eggs, and I went through the remaining nuts by hand and removed any that had any holes, were too small to contain anything, or were still green. Similar to the sample I took a couple weeks prior, only about 1/6 of the nuts that sunk in the sink test ended up being edible.

Would I do it again? Probably not - in addition to receiving hundreds of mosquito and tick bites while out harvesting them, there's so many wild critters also looking to eat them that very few of the ones I picked were edible; about 20% passed the sink test, and 17% passed the drying test, for a whopping result of less than 4% of what I picked being edible. They tasted lovely but so much work for such a small return just isn't worth it when not in a survival situation - I'd have been better off picking chokecherries and making some jam or wine.

1) American Hazelnuts (usually) ripen faster than most other nuts, usually ready by mid/late summer to early fall, that is, between mid-July to early September depending on climate and species/cultivar.
2) American hazelnuts can be picked when the involucre (outer casing) is starting to turn brown up until it has completely turned brown and peeled back, but can be eaten raw when still green. The longer you wait, the lower your chances of it being edible.
3) Unlike beaked hazelnuts, you can safely yank them right off the branch, although twisting/snipping them off will cause less damage to the plant.
4) If they have holes in them, they've already been eaten by grubs and are inedible and can be left on the ground for other animals to eat or composted.
5) When peeling off the casing, place a batch of hazelnut clusters in hot water, then remove the casing (place aside for composting) and leave the nuts in the water. Remove any nuts that float and add to the casings to be composted.
6) Place the remaining nuts in a single layer on a drying rack to air out for 1 to 2 weeks, with something underneath to catch any emerging grubs. Alternatively, the nuts can be dried for 2 to 4 days in a dehydrator, removing any emerged grubs daily.
7) After the hazelnuts have sufficiently dried, remove any nuts that have holes in them or are blemished, any nuts too small to be edible, and any nuts that are green but still hard.
8) Crack open and enjoy, or keep for up to 6 months, after this point they'll start to dry out and become less palatable.

posted 7 months ago
Thank you for sharing this!  I especially like the pictures.  I have been thinking of planting hazelnuts, looks it it will be a lot of work to get much out of them, though.

Mk Neal wrote:Thank you for sharing this!  I especially like the pictures.  I have been thinking of planting hazelnuts, looks it it will be a lot of work to get much out of them, though.

These were wild ones growing along a trail in the bush - they're fairly small (partly because they're wild, partly due to poor growing conditions) and surrounded by the wildlife that want to eat them. If you want to plant some, I'd recommend looking into filberts - they're a cultivated variety so you'll have a better bang for your buck, and I've read that if you keep light netting over the bush you'll prevent the grubs from getting into them.