posted 1 year ago
I'm curious how others have decided how to design their food forests and forest gardens? I understand many have not had quite the blank slate I have, but it will be intriguing to compare notes.

posted 1 year ago
I have a rectangular area that is probably 300' by 100', running east/west.  There are large trees on the south side so I had to work around that shade.  My first goal was to get nut trees established so I put them in clumps (guilds?) along the north edge so they wouldn't shade the rest of the field as they mature.  Then I just added smaller species around them into the sun.  I only have 1/4th of the field planted so far so that I can change things as I learn.

One key part of my plan is that I'm clumping the nut trees together.  Butternuts are 6' apart, hickories are the same.  I figure they grow closer to that in the woods so why not do that in my field.  That way if one dies I don't have a huge hole in my food plan.  And several have died so the clumps just got a bit less dense.  Yay.

posted 1 year ago
Thanks Mike. Why did you start with nuts, out of curiosity?

My first tree outside my pallet garden is an almond one of my students gave me. I'm not sure if it's a sweet almond or bitter almond. I should ask. I have cashew seeds coming.
Tyler Ludens
pollinator
Posts: 11804
Location: Central Texas USA Latitude 30 Zone 8
1078
I like...

posted 1 year ago
I'm turning a grove of dead oak trees into a food forest, so I have to work around the huge trunks and falling branches.  So far I have planted Plums, Figs, Mulberry, Moringa, Elderberry, Passionvine, Spineless Prickly Pear, and a bunch of support plants.  There were already native fruits Texas Persimmon and Gum Bumelia and some Cedar Elms (which have edible seeds). 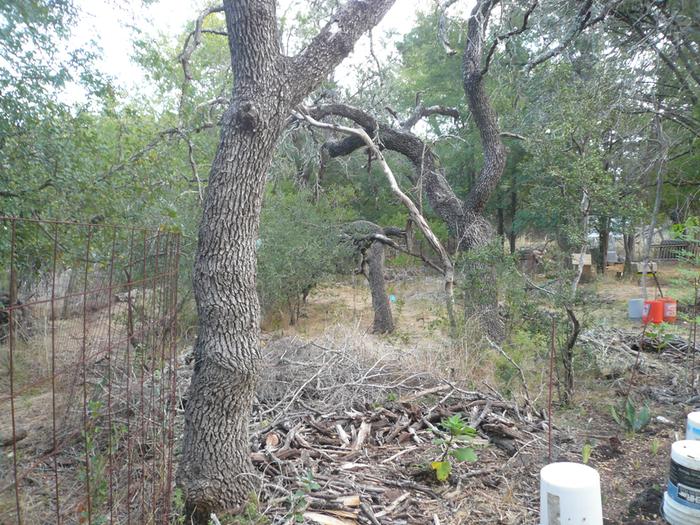 posted 1 year ago
Nice, Tyler! I'd love to find some spineless prickly pear. I have a local kind, but it's definitely not spineless! Ha

At least you have a good amount of biomass to start with! Will you leave the dead oaks up to rot on their own, or take them down? How do you plan to use them?
Priscilla Stilwell
pollinator
Posts: 270
Location: Haiti
28
I like...

Ah. Makes sense. I have to investigate nuts here. I know there are more, I'm just not sure where to get them. I'd love to grow cashews! They grow in the north, but not sure if they'll do well here. I can always try! :)
Marco Banks
gardener

Thus, I started with swales, hardscaping (stacking keystone blocks to build retaining walls) and water capture infrastructure.  Before I planted a single tree or laid out a pathway, I spent a year just observing the land, and in particular, paying close attention to energy (sunlight) and water (rainfall and how much water came off my roof).

By year two, I had a basic design in mind, following the classic permaculture zone principles.  In my case, there were only 4 zones (0, 1, 2, and 3).  I sketched and resketched plans, and moved large rounds of firewood around the property, each one representing where a tree or some other feature would eventually be sited.  I used rope or old pieces of garden hose to lay out where the swales would be.  I wanted to get a visual of what it would eventually look like before I ever planted anything.  Then I dug my swales on contour, installed rain gutters and connected them to the swale system.

By year 3, I had a long list of plants that I had researched, and had already begun a nursery to propagate things from seed and cuttings.  My compost system was in place, and the chicken tractor built.  Only then did I begin planting trees.  I had a small garden already, and was workin

In the 19 years since we started, I've removed trees, upgraded swales and retaining walls, added trellises and a cold-frame system for starting plants much earlier . . . but the basic layout of the food forest was done right the first time, so I've never needed to restructure anything significantly.

Take your time and get it right.

posted 1 year ago
I would also consider the nitrogen fixers and soil-improvers early on, with a higher percentage in initial years to help build soil and support the other plants, and as your soil improves you switch from say 75% support plants to 25-50%. I'll be driving up to my place in a few weeks to plant the black locusts I grew from seeds, plus plant a whole bunch more seeds directly. These are mainly for a firewood lot that I hope to coppice, but I'll probably plant some additional clumps in other areas of the property as the soil is pretty poor, and hopefully these guys can help improve things over the next several years. Then I can evaluate where to add food-bearing plants and others that need additional support plants.

1. Intensive nucleus. Decide where you want to start, a given point, and build out as you have time and resources.

2. A niche in space and time. Always be looking for that spot that just wants a something. It's a very enjoyable way to interact with your land.

Nathanael Szobody
pollinator
Posts: 459
Location: Boudamasa, Chad
115
posted 1 year ago
I should add: start with water harvesting. Right under a swale or around a pond is the most logical place to start food forest.

Mark Brunnr wrote:as your soil improves you switch from say 75% support plants to 25-50%.

Mike, Shagbark Hickory are rock-solid in zone 4.  I have lots of them and -40 doesn't seem to affect them at all.  I have read that it takes them 40 years to begin production, so it may be a tree for your grandchildren.

I currently only have hazelnuts and walnuts that I planted.  My walnuts started producing by year 3 or 4, my hazelnuts got their first nuts this year, and only a handful of them, but I was very happy to see them.

I have a much more eclectic approach to all this.  I just pick a spot, plant a food-producing tree, and fill in around it with a lot of support plants and things I like.  I keep adding to the outsides of the guild until they touch.  I let paths and the like figure themselves out.  I'm not good at planning things like this, so I just plant.  I also make rock piles, brush piles, and other habitat places any old place that strikes me.  I envy people that have a well laid out plan and have nice organized areas.  My areas look much more like a blind man in a wind storm set them up.  But they make me happy.

posted 1 year ago
Awesome, thanks Trace!  I'm not sure if it's the soils around here or the climate but I don't tend to see them naturally growing in the northern half of the state.  I do see butternut and the odd black walnut.  And I remember a while ago on a hay ride that a farmer near Oshkosh had planted black walnut in a field but knew that they were borderline down there.

My guilds are merging just like yours.  A new tree starts growing in a path?  The path moves...

posted 1 year ago
Love these answers. I think I'm doing something that's sort of a combination of them all. I didn't start on my initial garden until my second year after watching and learning, specifically the weather patterns. I started with the garden at the front of the house (garden 1, or zone 1) which was determined in size, shape, and placing by the number of pallets I was able to find, and the whim of the university groundskeeper who assembled it for me. That has brought other challenges and opportunities.

I'm planting quite a few fruit trees now for two primarily reasons: 1. I want to get something growing and want to see results before I move away from here in who knows how many years. 2. They we're donated, so I have to get them in the ground.

Secondly, I desperately need to get organic material and support planted. I'm getting a bunch of vetiver and am praying that sheer numbers and the investment of a good slingshot will help deter the goats. I'm considering hiring one of the neighborhood boys to sit on my porch while I'm teaching and shoot any goats that come by. I'm starting quite a few moringa seeds which germinated and sprung up two inches in about 4 days from planting. Same thing there. Trying to use sheer numbers to outrun the goats. The fruit trees all get fenced in with hardware cloth, but I don't have enough to fence in all the support plantings. Talk is that the engineering students will begin working on a goat-proof fence next month when classes resume. Here's hoping!
IMG_20190906_090026.jpg