Andrew Mayflower
pollinator
Posts: 413
Location: Northern Puget Sound, Zone 8A
66
posted 1 year ago
My experiment with the lambs over the summer went quite well, though it also showcased some issues that a better, more permanent setup would help to alleviate.  I probably won't get lambs again until I have that better setup.

We're discovering that money is tighter than thought, but that will give me extra time to plan things out for getting a sheep flock started, so not a bad thing in that regard.

The idea, in broad strokes, is to use the rectangle on the south side of the property marked in the picture.  It would be about 620x75', so a little over 1 acre overall.  Field fencing (woven wire) along the property line with hot wire above to a total height of 7' and a hot wire on the outside down low to dissuade coyotes and neighbor dogs (along with the local elk and deer).  Still trying to decide on fencing for the interior portion, so suggestions appreciated.  Woven wire is not desirable on the interior as it needs to be stretched, and adding gates is expensive.  I was thinking about using poly tape or poly wire for the north-south partitions to divide it into sub-paddocks so I can keep things flexible and make it relatively easy to re-set.  One advantage with that is I can just jumper off the perimeter hot wire so won't need a separate charger.

As you can see in the attached picture it's pretty wooded in that section of the property.  I'll be cutting down a few trees that are dead, tops are already broken out, leaning badly, etc.  If needed for light penetration I can thin a bit more than that.  My hope is that the sheep would eat out the underbrush to start with, and I'd plant forage as they clear areas.  So ultimately wind up with a more or less silvopasture system over time.

While I know Travis likes wool sheep, because of the huge issue with Himalayan blackberries here I'm going to target hair sheep.  A custom butcher advised strongly, unless you really want wool for the sake of getting the wool, to get hair sheep because otherwise the blackberry canes are a major problem in the wool.  At least when the hair sheep shed the canes will go with the shed hair.  So, for breeds I'm eyeing Katahdin ewes and possibly a Dorper ram for terminal sire.

Big question I've got is how many sheep can that acre sustain with minimal supplemental (i.e. purchased) feed?  I figure 4 lambs a year (depending on size, maybe less if they dress out over 60lbs) is about all my family will eat.  I like the idea of selling any excess lambs to make the whole operation cost neutral or at least less expensive than buying low end beef from the store.  So, 2 ewes plus a ram, and their lambs is the fewest I'd want to run on that land, but I'm totally open to more than that.  Anyway, the less hay or silage or grain I'd need to buy the better.  I get it that the ewes will probably need some grain towards the end of gestation and at least the early part of lactation, so zero outside input is probably impractical.  Also, mid-November to mid-February is dormancy for most forage, and often July and August are too dry to allow for grazing without irrigation (and I don't get enough water from the well to irrigate).

Suggestions for improvements to this rough plan from those with experience greatly appreciated.
sheep_area.PNG 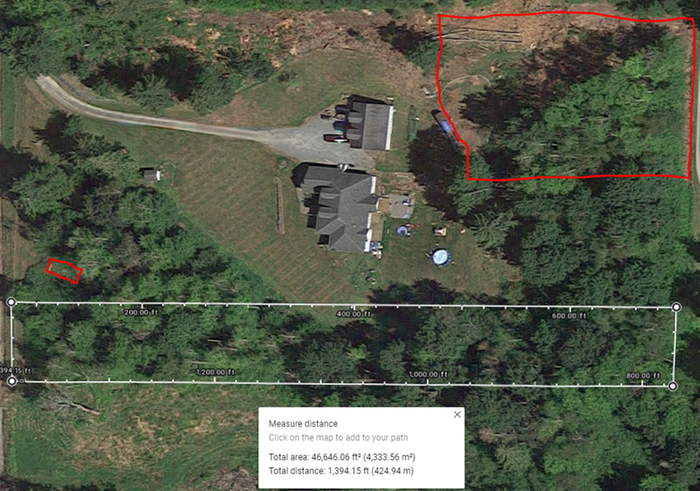 posted 1 year ago
How long is a piece of wool?
First you may find stocking densities with your local extension or others around you that have animals. But that will be for plain pasture and from the photo that looks more like woodland.
the numbers for Britain are considered to be 6-10 sheep per acre good grass and 0.5 per acre hill grazing. So you can see there is a huge variation in how many you can stock.

Andrew Mayflower
pollinator
Posts: 413
Location: Northern Puget Sound, Zone 8A
66
posted 1 year ago
Well, I put in that detail hoping folks could help me figure out the carrying capacity of that land given the variables I mentioned.
Devon Olsen
Posts: 1143
Location: Central Wyoming -zone 4
21
I like...

posted 1 year ago
I've only just started with my sheep operations as well, I did 3 lambs this year, katahdin/dorper crosses, compared to the neighbors horses, they hardly ate anything, especially the first month or so of my ownership, but giving them enough space to be comfortable and moving daily, they went through probably close to 3 acres IN MY ENVIRONMENT
I think that if I do not graze horses next year I can probably manage to utilize the 10 acres I have access to without a large amount of hay feeding through the winter with 2 ewes and a ram, but of course time will tell

the sat photo makes me think that you raised pasture raised poultry just south of the house there, is that true? if so, what did you notice about the grass in that pasture? did it regrow within the same grow season? how long did that take? how tall did it get when ungrazed? how tall after the birds were on it? answering these may help you to understand whether your land can handle a second grazing or not

Andrew Mayflower
pollinator
Posts: 413
Location: Northern Puget Sound, Zone 8A
66
posted 1 year ago
I ran broilers on the grass from the where the grassy part narrows along the driveway around to the back of the house by the patio (that was where we set up for slaughter).  The lambs were mostly kept in the same area as the chickens.  I measured that area and it was about 0.35-0.4 acres.  The 3 lambs wound up re-grazing probably half of that area once in the 3.5 months I kept them.  However the grass was never all that tall to begin with as the chickens (and turkeys) clipped it pretty well before I got the lambs.  I avoided mowing as much as possible and had enough grass, but a different grass would have been better, and there wasn't enough clover and forbs to really be ideal for grazing.  With better grass/other forage and allowing proper grow out on the forage before putting the sheep on it, and intensive rotations, that open grass area could have definitely supported more sheep.

But, SWMBO doesn't want the sheep on that part of the lawn.  The neighbor to the north isn't going to be nice if I put the sheep along that property line.  The lot to the south is undeveloped and won't get built on anytime soon (water rights issues).

I could expand the sheep area to include the rest of the wooded triangle on the west side of the property, and the wooded area along the east side (up to the chicken zone).  I would have to exclude them from the septic mounds and from getting too close to the well head which is at the small outbuilding by that triangular wooded area.  Factoring that in I could give them up to about 1.7-1.9 acres.
Tj Jefferson
pollinator
Posts: 1326
Location: Virginia USDA 7a/b
314
I like...

Love LOVE what you are up to. This is sooo much like my chaos farm. I would say based on your stated desire:
Check with the Washington Extension Department and see if they have a silvopasture thinning or tree spacing guideline for different areas of the state.
This may have carrying capacity in kilos/lbs of animals for full year and part year.
Probably going to mean thinning the trees a lot. I take care to cut them short enough to be able to bushhog just to keep it in the range of the sheep (which we are getting this spring).
I'm a fan of your perimeter fencing charging the temporary paddocks. I would work on getting the management to let you range the sheep and chix on the lawn, my lawn is quite envious after getting grazed a couple years.

Rock on dude looks great. If you can get a bunch of wood chips i throw those down before the chix go through and they compost them in a couple weeks. I do a couple yards per 2000SF paddock.

As a little teaser, Joel Salatin and Greg Judy don't bother planting perennial forage in my understanding, they plant annuals for a year or two and the perennials show up. I am doing that on the most recent 6 acres of paddock and we shall see.

Kris schulenburg
pollinator
Posts: 178
Location: Henry County Ky Zone 6
28
posted 1 year ago
Your perimeter fence sounds great. For a movable electric fence Gallegar smart fence works well for my sheep. You can roll up or out 4 wires at a time and is about as easy as it gets if you move it often.
Andrew Mayflower
pollinator
Posts: 413
Location: Northern Puget Sound, Zone 8A
66
posted 10 months ago
Just had a guy come out from the Conservation District.  Really nice guy and pretty helpful.  He showed me some maps of soil types and whatnot for my property.

He said that in the high quality pastures of the valley floor about 1 cow/calf per acre equivalent is the usual carrying capacity, which would be 5 sheep (plus lambs).  He figured about half that is reasonable for my property, so I'll probably aim for 3 ewes and a ram on 1.5-1.8 acres for now.  Granted that capacity assumes good forage, and with all the undergrowth in the woods it might take a couple years to get there.  He also recommended putting lime on the soil because there is quite a bit of moss growing which he said indicates a more acidic soil than most grass and other ruminant forage usually likes.

He's going to put together a farm plan for my property to help with setting up a successful operation.

And it's all paid for by a combination of grant money and tax dollars (and, yes, I'm aware that most of the grant money probably comes from tax dollars).