Gray Simpson
Posts: 67
Location: McDonough, GA
posted 8 years ago
My mahonia bushes (invasive -- volunteer plants) have some beautiful fruit this year. I'm going to try this recipe soon. I might try freezing some of the fruit and see if that makes it sweeter. http://s158336089.onlinehome.us/OregonGrapeJam/OregonGrapeJam.html

Getting the fruit off the seed is going to be challenging without a Foley mill.
Gray Simpson
Posts: 67
Location: McDonough, GA
posted 8 years ago
The pulp tasted like rottten collard greens once I boiled the berries, so I threw it out. Oh well.
gani et se
Posts: 222
Location: Douglas County OR
2
posted 8 years ago
Huh. I've made oregon grape jam, but I used a vittorio strainer -- hand crank the fruit through it, didn't boil the fruit first, then heat to a boil add sweetener and pectin. It was alright, certainly not boiled collard! This year, if I can find some (in a new place) I think I'll use it as a mix in with apple butter.
Did you taste them before cooking? They are tart, for sure, but not astringent, when ripe. Unripe ones might taste pretty nasty when boiled...

Oregon grape is scattered all around our area. I've only sampled a few of the berries last summer. They were tart enough to pucker my...

One of our neighbors down the road said that he has a friend that makes a good jam out of it. I'll try and remember to see if he can get the recipe sometime. Most people around here don't seem to have much use for it besides a landscape plant, these days.

One of the comments in the above link was that richer soil and more water may lead to sweeter berries.

Gray Simpson
Posts: 67
Location: McDonough, GA
posted 8 years ago
The berries themselves taste good, like blueberries, but with half the sugar. They're mostly seeds and skin. Mine are probably a different species than the ones in Oregon. I guess I should have listened to Walter Reeves when he said that they're not considered edible!
DSCF9917.JPG
DSCF9918.JPG
Peony Jay
Posts: 145
Location: B.C.
1
posted 8 years ago
True story. A local First Nations woman told me that her grandmother brewed up a Oregon Grape tea (or maybe a tincture) to treat her acne. It really works! Goldenseal and Oregon Grape have similar chemical compounds.

Peony Jay
Posts: 145
Location: B.C.
1
posted 8 years ago
A shout out to Kay Bee. Thanks for introducing me to thepracticalherbalist.com Cool!
Ever seen the German Commission E herbal website? Very informative.
http://cms.herbalgram.org/commissione/HerbIndex/approvedherbs.html

Kay Bee wrote:Various parts of the plant can also be used for medicinal purposes.  Some good info here:
http://www.thepracticalherbalist.com/conditions/what-ails-you/233.html


This link was broken, but that website looks like it has several good articles on Oregon Grape:
https://www.thepracticalherbalist.com/?s=oregon+grape.

And for the OP, Gray, perhaps your Oregon Grape is a different variety - I haven't seen the pointy-ended berries like that before.

This article explains a lot and raves about the flavor of the Oregon Grape (Mahonia aquifolia or M. nervosa):  http://wildfoodsandmedicines.com/oregon-grape/. From that article, here's a pic of the M. aquifolia berries: 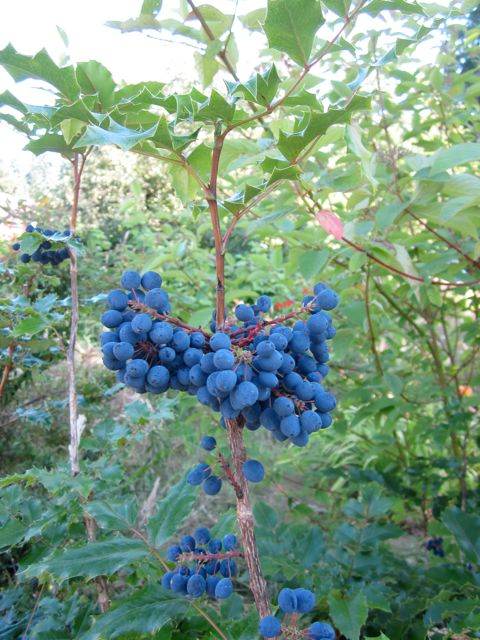 We have the M. nervosa rampant here in Montana, and the berries are similarly round though smaller and, of course, lower to the ground.

I like to dry the root for medicinal tea (today I was gifted some when Kai dug up a new garden area - nice!!) and was looking for more information and found this thread.


The story behind 'Charity' is also filled with intrigue. 'Charity' is a hybrid of M. japonica and M. lomariiflia which showed up around 1950 or '51 in a shipment of 100 M. japonica seedlings from Slieve Donnard Nursery of Northern Ireland. Six of those seedlings eventually found their way to the Savill Garden near Windsor, and several years later when they eventually flowered it was obvious that one plant was markedly different from the others. The new specimen was subsequently identified as a naturally occurring cross between the two species, stock plants of which were grown in close proximity at the nursery.

I have three of these as part of my winter garden.  They haven't filled in yet so they look a little funny, but they are absolutely delightful when everything else has given up.  I'll post a pic from Nov 3rd, 2016.   For a couple of weeks after that I had a few straggler bees feeing off of these.  I think they must have been one of the last few food sources available...in my yard, at least.  They are VERY spiny, moreso than the native mahonias.  One of the other reasons I have planted them as part of a hedge is to provide safe cover for birds. The birds really like my mahonia aquifolium....too soon to tell with these.

The berries look similar and have about the same quality of taste, LOL.

Oh, one other function of this mahonia....it grows where plants should not really grow.  This section of my yard is basically really the edge of the neighbors driveway and these are essentially planted into shale-like driveway gravel.  I mulch them well and say nice things to them.  but they are growing as if they are happy in soil that could only be made worse if I poured a bottle of motor oil into it and lit it on fire. Tough, tough plants.