The biological control of spanish slugs

Markiian Khylynskyi
Posts: 4
Location: Lviv, Ukraine
posted 1 year ago
Hi, I am form Ukraine. Westn Ukraine has been being attacked by spanish slugs (Arion lusitanicus) for at least 3 years. There is information on the internet that the population of spanish slugs can be controlled by their natural enemies (hedgehog, lizard, frog, beetle and etc.), but this is only theoretical information. Thus I ask to share your own experience.
Anita Martin
gardener

posted 1 year ago
Here in Germany we have been struggling with the Spanish slug for much longer.

I wish I could say that I have a good biological solution.
The problem is that the local fauna is not well adapted to this slug. Their slime is so viscous and bitter that most animals refuse to eat it, including hedgehogs, toads, blackbirds etc.

With our wet climate and heavy clay soil I have a huge problem with them and there is a long list of crops and plants I cannot grow at all or under great difficulties, including sunflowers, cucurbita and carrots (especially the first spring seed).

What I try:
Keep the garden a bit tidy and the grass short, although this is NOT the way I like my garden.
Go through the garden at dusk with a pair of scissors.
Encourage Limax maximus. They can eat tender and wilted veggies but will also feed on slug eggs.
Try to have different habitats in the garden. Although the adult slugs don't have many enemies, the young ones and eggs have (beetles, toads, you can also let your chickens roam in the garden under supervision). Indian runner ducks are also quite popular to fight slugs.

I knew of someone who used nematodes, repeatedly over several years, he said the problem got much better. It is a rather costly way, if I remember correctly.

Markiian Khylynskyi
Posts: 4
Location: Lviv, Ukraine
posted 1 year ago
Thanks for the answer. How do you know that Limax maximus eats slug eggs?
Anita Martin
gardener

posted 1 year ago
Various sources (including Wikipedia) state this fact. I have not seen it with my own eyes, but over the years I am seeing more leopard slugs and less Spanish slugs.


Markiian Khylynskyi wrote:Thanks for the answer. How do you know that Limax maximus eats slug eggs?

bruce Fine
Posts: 1270
74
posted 1 year ago
I don't know how biological this is but a little bit of salt will permanently control slugs
Hugo Morvan
gardener

posted 1 year ago
Hello Markiian, welcome to Permies.
Horrible if that happens, i remember some years ago, it was awful. Now there are less of them and funny that you mention that Anita, i noticed an uptick in the panther snails as well. After a good rain in summer i could easily fill a bucket of the slimy Spanish buggers walking through the garden. They dig themselves in and pop up in rain. Evil they are. eating all lettuces and whatever you planted.
I had used plastic water bottles, cut the bottom off of them and place it over the plants, the veggie patch was full of them. Sometimes they'd climb all the way up and in through the caphole, sometimes they got burnt or grew long and thin. They weren't easy years. Snipping them in half at sunset and mornings was a macabre ritual, feeding that to the fish. The tadpoles lgrew to like it too.
What helped was saving seeds of succesful plants, in stead of a miserable package of seeds paid for, have hundreds of them, they can't eat all of the seedlings.
But suddenly the Spanish bastards were more or less gone.. I noticed an uptick in glowworms, and saw them in snail houses. Just read that they eat slugs as well.
I have a small pond with frogs, they eat them as well i guess, when they're smaller. And i have woody debris in piles which slowly decays, which is great snake habitat, they eat them as well. But i haven't seen snakes, i do come across a toad every so often, they like the same woody debris as a hunting ground, and is attracted to the pile of rocks i keep as well.
More birds have arrived as well, the garden used to be quite boring, just grass and a few peach trees the previous owner has planted. More species, local transplants from the wild and herbs , medicinal and for the kitchen have made for a insect paradise, which attracts birds which might eat the odd snail.
But all these predators together might have done the job. I hope not to be out there again with scissors and buckets. They seem to come in waves according to wikipedia. But then still ,the natural enemies who have found a place in my diverse garden will feast on them.
Fingers crossed. I hope these are some tips you haven't tried yet Markiian! Good luck!

J Grouwstra
pollinator
Posts: 131
Location: Fryslân, Netherlands
58
posted 1 year ago
I know someone who reported success with iron mesh, so I tried it as well, and I have indeed seen a large Spanish slug try to move through the mesh, but give up because there was no way.
The mesh holes are 6 mm, so smaller slugs can still get through, and I've seen that happen, so by no means a guard like this makes your crops safe, but it should help something against bigger slugs. At least it's fairly easy to make. In the picture you see slug traces, this plant didn't survive in the end. I'm guessing it's smaller slugs that killed it. Normally I wait putting cucurbitaceae out until they are a little bit bigger and have the first hairy leaves.
I wonder if someone here has tried sheep fleece around plants. I've heard it mention but don't know of any experiences.
Slakjewurkdien.jpg 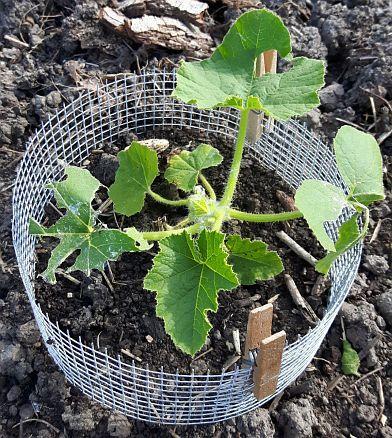 posted 1 year ago
AH yes, lovely things aren't they, I lived in a swamp we had/have thousands of frogs and toads, multitudes of ground beetles, plenty of leopard slugs and still a stupid number of the invaders. I did not find that biological control as it were made any noticeable difference, we have so many frogs and toads that mowing the lawn is mass murder and we have to fish them out of the septic tank surround up to 10 at a time. (I put sticks in in the end to let them climb out themselves) Chickens wouldn't touch them, but they enjoyed baby frogs very much thank you!

We found that hitting them early in the year was imperative, whichever method you use start as soon as you can, place boards down for them to hide under then go out and lift them the next day and destroy, go out with a light and find them at night, whatever you have to do to murder the things. this little bucket (12L) took 20minutes to collect one evening. it's a mixture of Spanish slugs and some native forest slugs (the black ones) The 30 ish muscovy ducklings we had took 2 days to eat them!
Slugs.JPG 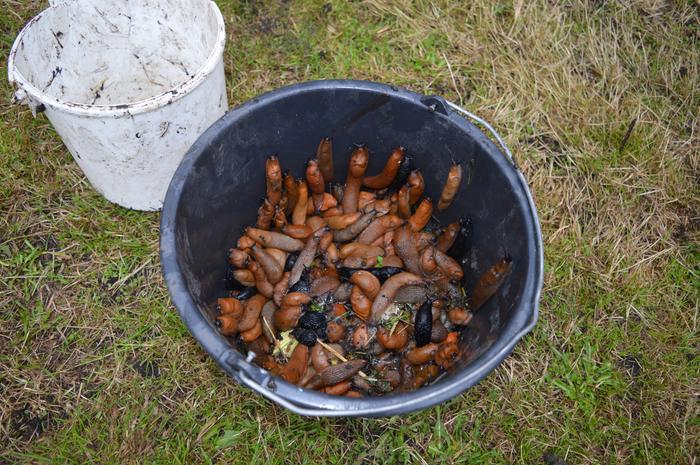 posted 1 year ago
Haha, that bucket brings up memories. I've read another piece by a permaculturist about slugs, what i gathered was that they have the tendency to go after the weaker plants. They won't touch the dandelions. They're cleaners. Their role is to kill the weak diseased plants. What we have done with our cultivation attempts is create weak races that taste great to us. They don't produce a lot of bitters to repel slugs, which plants naturally do.
When you plant monoculturewise, it's easy for the slugs, they have to adapt their stomach to the food they're eating every time, so a more mixed planting will be more resistant.
Furthermore he stated that the more worms in the soil the less slugs.. I didn't understood why that is. I did understand in a piece he wrote about worms that in the dung of worms there is a substance called chitinase. Which plants can thereafter take up. It weakens the shields of bugs when they eat the plants.
A lot of people throw chemical deterrants against slugs which end up in predators of the slugs, killing the predators at some point. The decline in hedgehogs is suspected to have that cause. Monocultures of weak plants are everywhere, few worms in modern soils. And Spain is exporting quite some salad, so maybe eggs have travelled that way as well, and global warming has made for weak winters and dry summers, which favors the spanish snails.
They move mycorrhizal fungi around which are of massive importance to plants getting access to nutrients and slug-waste is ready for plants to take up. So if were to plant more diverse stronger plant races with localized genes and have enough places for predators to live closeby we would get a better balance, more diversity and less bugs.
That's the theory at least!


That depends on your soil and climate as well as surroundings (gardens, forest, meadows?).

Here are crops that are difficult, at least in their young and tender phase:
Cucurbitae (zucchini, cucumber, pumpkins etc.)
Lettuce (local varieties of endives and similar do better as they are more coarse and bitter)
Carrots
Potatoes
Strawberries

Peppers, eggplants and tomatoes will be damaged if they are easily accessible
Parsley and other herbs if there is a lot of slug pressure

I am sure I have forgotten many veggies.
Be aware that this is true for my garden and may vary.
(I keep adding to this list as I remember)

I knew of someone who used nematodes, repeatedly over several years, he said the problem got much better. It is a rather costly way, if I remember correctly.

I want to learn more about slug-killing nemotodes,  if they are native in the USA soil and how to  grow your own (a cost saving vs buying NemoSlug?
Here is the thread I started on it - with the How to DIY video link.
https://permies.com/t/142460/DIY-Slug-Killing-Nemotodes