posted 4 months ago
Hi there, i tried Brassicas last year, it wasn't a big success.
There were worms eating my Bruxelles sprouts roots, killing off most of them. two of them survived and are about to flower next week.
The Borekale i planted in the mid of the heatwave. The whole summer was a heatwave/dry spell, last year, a wild boar came and ate most except some hidden ones. The two survivors are about to flower next week too.
It's not clear which one is going to flower first.
I had some brocolli, which failed completely, and some Savoy Cabbage which failed utterly.
The one that did brilliant, were many, survived the drought, worms, cold, looked good to eat, grew quite big and tasted great was the Kale, black Tuscan.
I thought he looked kind of funny, not how i imagined from the picture, but i tread it like a Kale. Getting the leaves from the bottom. It grew closer to the ground than the Kale i had seen, not like a Palm tree at all, and the leaves were totally different, but it tasted great, so i didn't look into it.

Until now. Turns out it is some kind of mix and the e-bay account(what the hell was i thinking) of the guy i got the seeds from has been closed down. Guess he got into trouble for his weird mix.

I always try to save seeds, because it saves money and because i believe the next generation will be better adapted to my soil, conditions, plagues, bad temper and everything else then the previous ones. And so i will with these Brassicas. I've looked online, people say it's very difficult and don't bother.
But why would i even listen to them when my best Brassica was a weird mix from a guy that closed his ebay account and not some of the pure races everybody advocates.

So now, how to proceed, because i am not hindered by any knowledge about Brassicas i thought to tie a plastic bag over the flowers and tie it closed at the stem. But maybe they need an insect to cross pollinate. Or me with a cotton swab.. Maybe they don't self pollinate.
I have no idea and would appreciate any guidance. Even stuff like don't even bother, it's useless. 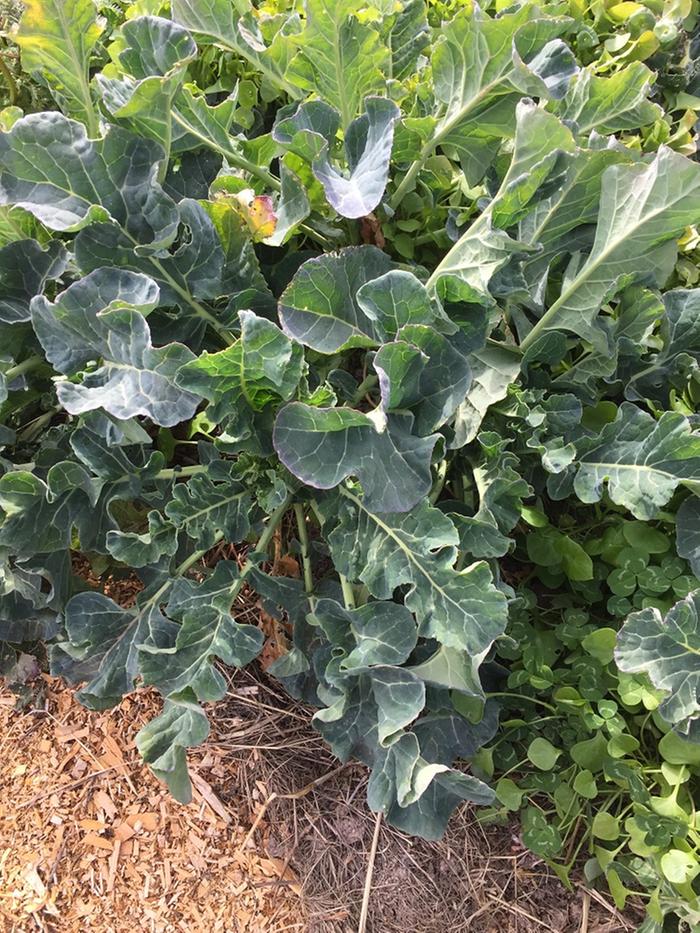 Burl Smith
Posts: 420
Location: Richwood, West Virginia
4
posted 4 months ago
LOL, I have fifty or so Collards which I nursed thru the winter only to discover that I really don't care for them as food (I have a preference for cauliflower leaves apparently) but the  Collards are about to flower so I will be following this thread.

posted 4 months ago
That book is great. Have fun with it.

posted 4 months ago
Burl, mine look like tree collards don't they?
Michael, yeah i would buy Josephs book. Hasn't he become a yoga teacher? I won't buy a yoga book.

Posts: 2800
Location: Officially Zone 7b, according to personal obsevations I live in 7a, SW Tennessee
994
I like...

posted 4 months ago
I think the 'difficulty' of saving seed comes from the distance required to ensure the seed is pure to the parent plant. One of the first things I read from Joseph went something like this: "every time I plant a potato, I harvest a potato." That has really freed my mind.

I've noticed that in my garden, the different brassicas bloom at different times. Even two kinds of kale only slightly overlap. When half of a plant starts to dry, I have cut off the top and dried the rest in the greenhouse. Hanging out of the weather should work too. Once dry, put the seed pods in a pillowcase and crush in your fists, or jump up and down on it. Whatever. Winnow out the chaff, and store until next planting season.

Except, I've also been known to skip the drying, Just tossing the tops of the plant, seed heads and all, under my fruit trees where I want some brassicas next season. This works well when your mulch supply has broken down to compost.

Basically, I only separate sweet peppers and hot peppers by roughly 50 feet. I don't want to be supprised when I snack 'em by that spicey burn! Most other stuff is free to cross at will in my garden.

J Grouwstra
pollinator
Posts: 124
Location: Fryslân, Netherlands
50
posted 4 months ago
For a few years I'm now saving my own Brussels sprouts seeds, and the resulting plants have been good so far. My Tuscany kale plants haven't always been true to type; didn't consistently grow into a palm shape, but still tasted great and like they should.

The Brassicas aren't the easiest plant family to save seeds from if you're particular. Within each species all members can cross with each other. This means that, for example, broccoli, Brussels sprouts, cauliflower and collards can all cross with each other, as they're all Brassica oleracea.
Brassicas require insects for pollination, and are often self-incompatible, meaning they require another plant, with a slightly different genetic make-up, for successful reproduction. So you cannot just cage one plant to get around the cross-pollinating problem... Also it's not a good idea to save seeds from just one plant, because of lack of genetic diversity that way - you don't want to create a genetic bottleneck. But you can always introduce different seed again somewhere down the line.

So the textbook will say Brassicas are tricky for the seed saver, but you can ask yourself how distraught you will be when your results won't exactly turn out as planned. Possibly you won't be scared by the idea of a broccoli possibly having crossed with a cauliflower... If you're not a professional catering for a market, you might have a different interpretation of the 'risks'.
Hugo Morvan
pollinator
Posts: 616
Location: France, Burgundy, parc naturel Morvan
240
I like...

Thanks for your contributions and information.

Joylynn, you're lucky your Brassicas are all flowering at different times.
Things have become even more complicated by now as i've discovered more Brassicas on the land. One is landcress, already flowering, and i've got two more Brassicas that are about to flower, a Mizuna and a mustard leave "Green wave".
I've read online you can take cuttings of Brassicas, basicly torn off side branches. So i've taken cuttings of the Kale i really would like to keep and potted them up. It will take a while for them to start growing now again. They might immediatelly start to flower after having taken root, but since they'll be in pots, it will be easier to get them to a place where they'll be pollinated by insects away from polluted Brassicas.

The Mizuna i got from a friend who's asked me to save the seeds, because hers were eaten by bugs. I've taken out the biggest plants and potted them up, the tops of the plants i've cut out and have found viable cuttings in there as well. We'll see. It was a lovely thing this winter to add to the pumpkin soup, because it is pretty spicey/mustardy/hot, in contrast to the sweet pumpkin soup.

Since it's way too complicated for me, i 'll let the plants do what they do and let it be a feast for the insects. What comes out in the seeds will be a surprise.
My friend has told me she has saved Brassica seeds before and the next generation was pretty much similar to the mother plant.
And like J Grouwstra says if i am not too particular about the purity and not marketing, the plants might turn out good enough.
And who knows it might introduce some genes of the better adapted plants into the mix. Their genes will have the upper hand since the best adapted plants create most flowers.

posted 4 months ago
I don't know if this will help in your situation. Brassica seeds last several years if stored dry and cool, so maybe you could try producing seed only from your nice mystery kale this year, by removing all other brassicas that are flowering at the same time. And next year save seed from some other brassica that turns out to do well in your garden. I do this with different varieties of lettuce. The red butter-head lettuce I saved seed from 5 years ago still germinated nicely recently.

You're growing Mizuna. What I find with Mizuna is that it self-seeds very happily, comparable to chard. I've let it go to flower and laid the wilted plants at different places. Sometimes the leaf structure of the offspring is a bit different, but it's all unmistakably Mizuna. It came up with me having done almost nothing; gardening couldn't be easier. But Mizuna is Brassica rapa, so the species name is rapa, meaning that it isn't compatible with, say, sprouts, because that's a Brassica oleracea. Maybe there were few other Brassica rapa plants in the vicinity. Not all Brassicas can cross with each other, they need to belong to the same species, and the species name is written behind 'Brassica'. Watching the species name probably makes this a lot easier to understand.
Hugo Morvan
pollinator
Posts: 616
Location: France, Burgundy, parc naturel Morvan
240
I like...

posted 4 months ago
Aha, the landcress is a Brassica verna, so that should not even cross with the Brassica oleracea.
Even if the BoreKale and Brussels Sprouts cross i'll get something which might be very good according to my friend. Any way it will enrich the genepool and be a nice experiment.
The other Brassicas are Green Wave and Mizuna, they are related and from the Juncea type. Brassica juncea should not cross over with the oleracea and verna, but since they are right next to each other i should only let the Mizuna get to flower and eat the greenwaves mostly. Unitil the Mizuna has finished flowering and then let the Green Waves do it's thing.Thanks Rebecca for the tip!
Next year i'll plant the plants of the same groups further apart and by seed exchanges try to introduce new genes as much as possible to get a diverse crop that's very well adapted to the local soils and climate..

Except, I've also been known to skip the drying, Just tossing the tops of the plant, seed heads and all, under my fruit trees where I want some brassicas next season. This works well when your mulch supply has broken down to compost.

Under the fruit trees as an attractor of insects to aid in pollination because they may bloom in synchronicity with the fruit tree?

Posts: 2800
Location: Officially Zone 7b, according to personal obsevations I live in 7a, SW Tennessee
994
I like...

posted 4 months ago
With the apple trees, that is one reason. From my neighborhood, I have not been able to collect enough leaves and pineneedles to keep every thing mulched all year. Enough exists, but it does take time to rake it all up. Folks hereabouts just leave it on the ground. No handy bags sitting at the non existant curb. I need something for ground cover. The brassiacas seeds are cheap by the pound at the rural real farmer's supply store. The one that actually supplies the working full time farmers.

Late spring once the greens have flowered and gone to seed, I toss some of the seed pod 'branches' under the tree. Sometime around midsummer, the seeds will sprout. These plants will be happy in the mostly shady area, with fewer bugs than in full sun location. These will remain happy over winter, with the sun shining through the now bare branches.

If spring sown in full sun in my yard, they get destroyed by bugs and they want to bolt by July.