Gerald Benard
Posts: 16
5
posted 10 years ago
I started an experiment this weekend by preparing two identical containers, put old logs (small) into the bottom of one, filled them up with identical potting soil/compost, and planted in them.

Has anyone tried Hugelkultur container gardening before?

What works? What doesn't work? 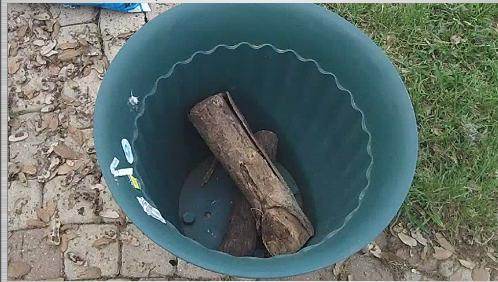 Rob Meyer
Posts: 103
posted 10 years ago
This somewhat reminds me of sub-irrigated planters. Here's a link explaining them:

Maybe you can try a third, with a sub-irrigation reservoir, and with some logs/sticks sticking up into the soil for wicking action. In any case, looking forward to seeing how it works out!
Gerald Benard
Posts: 16
5
posted 10 years ago
Rob,
I looked at the SIP site and learned something new. I hadn't see this approach before. I have an extra pot so I'll try it.

Thanks for the suggestion!
Ben Stallings
pollinator
Posts: 180
Location: Omaha, NE
15
3
posted 10 years ago
Maybe that's what the previous owners of my house were trying to do! They had wooden containers -- wooden on the sides and bottoms -- full of marigolds stationed various places around the house. As part of buying the house, we had to have a routine termite inspection which turned up termites in the planters, and because they were next to the house we were required by local ordinance to poison the whole foundation of the house, with the result that we now can't grow anything edible around the foundation. This experience has left me concerned about any hugelkultur experiments that might lead to termites getting established near a house.

But without insect help, won't the wood take an awfully long time to break down -- like years? How long will that plastic pot last? What will you use for nitrogen to balance the carbon? There's little room for N-fixing cover crops in that pot.

Good luck, and let us know how it turns out!
Gerald Benard
Posts: 16
5
posted 10 years ago
Ben,
The thought also occured to me that a Hugelkultur bed will last 10 years while this container garden will last maybe 2-3 seasons. I think it may make more sense to find completely rotten wood and put it at the bottom of the pot. The wood I used was old but not completely rotten.

I'll keep this thread posted on my progress and let you know at the end of the season if it rotted and if it helped my plants grow.

I did make an SIP (Self-Irrigated Planter) last weekend to compare results.

Sorry to hear about your termite problem. This government requirement to poison your yard is rediculous.

Thanks,
-Gerald
M Marx
Posts: 57
Location: Los Angeles
posted 10 years ago
that's interesting, my experience with container gardening of vegetables is that I hate it -- i wouldn't do it again unless forced.
I tried plastic and terra cotta. i have a bunch I should sell.
so, sorry to hear about the forced poisoning.
Mark Harris
Posts: 73
Location: Portugal
posted 10 years ago
A little off topic here but .... Talking of experiments. Paul W. said I think on one of the Podcasts that hugelkultur is a relatively new idea. I think he said in 2005 only a few websites used the word at all. Now of course there must be hundreds of thousands. I haven't spent hours researching this but there seem to lots of people putting up messages showing they have have recently set up a bed, or they are about to. But I can't seem to find any messages showing the results many years later.
Gerald Benard
Posts: 16
5
posted 10 years ago
Mark,
I have noticed the same thing. Jack Spirko has posted YouTube videos where he created Hugel Swales and Hulgelkultur raised beds and have shown them months later. There is some stuff out there showing it much later but I can't remember where I have seen it. There will be a flood of long term pictures in the years to come...
-Gerald

Mark Harris
Posts: 73
Location: Portugal
posted 10 years ago
Hi Gerald. I can understand how the wood in a container could act as a sponge, and possibly also slowly release nutrients too. But the use of hugelculture outside of containers I don't fully understand. In conventional gardening, raised beds = better drainage, and drier soil. So burying the wood in the ground to act like a sponge makes sense to me. But creating a raised bed above that I don't get. Maybe in Austria, in a cool climate, where a hugel swale would catch rain flowing down a hillside, it makes sense. But in a hot climate on the flat I am not so sure.

Maybe that explains why so many people get so excited about it, but are not so keen to show off the results a few years later ?
Mark Harris
Posts: 73
Location: Portugal
posted 10 years ago
Well I went through the first nine pages of the hugelculture thread that started in 2005. By 2011 (page 9) I could only find one person who had posted pics showing areas of hugel versus non hugel areas. The plant growth looked good on the hugel beds, but it was still being irrigated in the summer. Paul's rich soil article still shows artists impression photos, not real ones. I am not convinced by the idea of raised hugel beds on the flat. A raised hugel swale that catches water and then soaks it up makes sense maybe.
Gerald Benard
Posts: 16
5
posted 10 years ago
Mark,
I like your skepticism about this. You'll believe it when you see it. I got started in permaculture after hearing about two books by Brad Lancaster at about the time he published them. His material is some of the best I've read, even with so much new stuff coming out. He is very much into capturing water in drylands. The focus of his books is not Hugelkultur but on earthworks in general. He cites an example in book 2 about a fire scorched landscape where the local people took the dead trees, placed them on contour (Lama, NM, The Lama Foundation, Page 82 of Rainwater Harvesting for Drylands and Beyond Book 2), buried them in hay, and saved the scorched landscape by controlling and capturing rainwater run-off. He also writes about buried paper/junk mail and mounded wood chip swales with pictures. This adds to the references but not proof.

Are you specifically skeptical that the system holds water or that it won't get enough water on a flat surface and will require more frequent manual irrigation? I live in a place with long dry summers and know that I have to irrigate some in my garden beds. If I can space out these irrigations to once a month instead of 3 times a week, it seems like this would be a big win.

Jordan Lowery
pollinator
Posts: 1528
Location: zone 7
18
posted 10 years ago
i think that amount of wood wont do anything for you. i would rather just fill it with good soil.

we live in an area that is hot and very dry in the summer months. What you describe in that book makes perfect sense to me, and would be very helpful here. When the rain comes it can be very heavy and tends to flow across the land rather than sinking in. Traditionally the Portuguese have tried to encourage the flow of water to move towards large wells or deep ponds, then try and retrieve it in the summer months from these storage points. It doesn't seem sensible to me.

What I am sceptical about is the idea that on flat areas that having a raised hugel bed makes sense. The idea of burying wood in flat area to act as a water resevoir, I understand. But to me it would make more logical sense to dig a hole, put the wood in, and put the soil back so that it is level or even better maybe slightly lower than the surrounding areas.

What I see is people putting incredible amounts of effort and resources into creating raised beds, without any evidence from others on this forum that it actually works. I was waiting for the backlash from people after my first post on this thread pointing me towards the evidence of it working, but it hasn't happened. Why not ?

I don't get alot of time to look here through hours and hours of material. But in six years of posts on the hugel thread I saw alot of making beds, and virtually no positive feed back later on. I wonder if people are assuming they did it wrong, or used the wrong sort of wood, or just don't want to say that this might not work (say that the emperor has no clothes).

What I do have time for is for Paul's podcasts. I must have listened to around 50 now. Its very easy to do so while I do my normal farm work on a MP3 player. Paul seems to suggest when it comes to hugel beds the taller the better. He seems to suggest that hugel beds totally eliminate the need for watering, and has said that hugelkultur is one of the most important things Permies people should be spreading the message about. I am still looking for the evidence to support that.

I suspect that this all stems from the idea that everything Mr Holzer does has good like genius stamped all over it. I would be more impressed if he actually was making a living selling food, rather than a selling tickets to a tour of a permaculture theme park.