Lif Strand
Posts: 100
Location: New Mexico USA zone 6
21
posted 4 days ago
It's Scotland I want to visit -- maybe for a good long while -- and I don't know why. It's always called to me, which is kind of funny since I believe I photosynthesize in order to thrive (why I live in the US Southwest).  But Ireland, Wales, and England are where it seems to me the magical gardens grow. Green places that get actual rain (I've gotten approximately 3" of rain since last January and it's rather parched here right now). Flowers. Ferns. Mushrooms. Somehow in my mind Ireland and the UK are never humid, are always lush, and there are little winged beings hiding under leaves and petals that aren't biting insects.

Perhaps I should stay home so as to not risk disillusionment, but a girl can dream, can't she?

posted 4 days ago
John has family in Scotland, and we're both of mixed Scot & Irish descent. I guess that makes my calling to bagpipes, harps, bhodran, and flutes, wool, plaid, good whiskey, and rocky, rolling hills make sense! The Ozarks are home, and I'm ecstatic to finally be back here - but I've ALWAYS wanted to go visit the lands of the kelpies & brownies, even before I knew what 'heritage' meant.

posted 4 days ago
Scotland is the most magical place I've ever been. Before this year I was going for a few weeks each year with plans to go more. I'm trying to figure out a way to get a visa to live and work there eventually. Definitely go when you can, even when it's cold and so windy it's raining sideways I can think of nowhere better! The people are amazing and Lif, it is definitely home to many magical gardens.
Campbell Ritchie
gardener

Posts: 103
16
posted 4 days ago
You haven't lived until you have experienced the winter there. On a gloomy December day it doesn't get properly light until 9.30 and it is getting dark by 3. And there is a thing called Scotch Mist, which looks innocent, but Scotch Mist is to rain as taipan is to snake. If you go out for a half‑hour in rain you get wet. After half an hour's Scotch Mist you need a pee.
Skandi Rogers
pollinator
Posts: 1246
Location: Denmark 57N
346
I like...

posted 4 days ago
If you don't like biting insects don't go to Scotland. the midges are something else. Yes they are tiny but what they lack in individual size they make up for in shear numbers.
The West coast is the pretty, dramatic one with the rain and the mountains, the East cost is flatt(er) and much dryer. But if you want to live there don't live to close to the sea on the East coast or you'll rarely see any summer sun past 1pm. It'll be a lovely day you'll be sitting in the office in Aberdeen thinking ooh a couple of hours and I can go out and enjoy this. and then BANG the Haar (sea fog) comes in and you can't see the other side of the road nevermind the beach. go a few miles inland and you escape that. But you still have to listen to London centric radio telling you how it's 30C and lovely.

As for walking there's some really lovely places to get lost in (before August/September and the midgies appear) Here's a few pictures to enjoy. this first one is taken in a spot that involves driving to the end of the road past Ballater then walking to the end of the path and then carrying on. It was taken in September and I still have scars from the midges 10 years later. 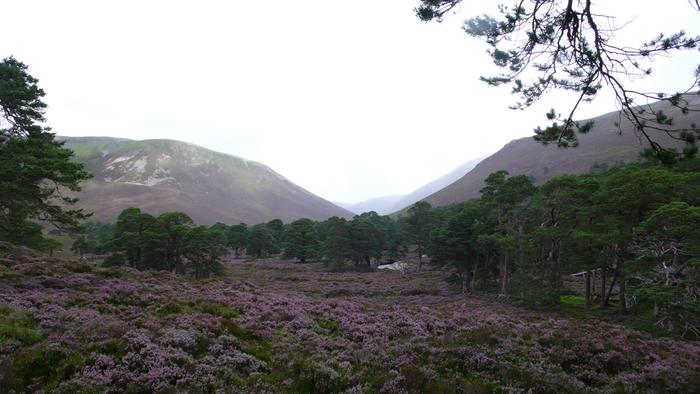 This next one is Glen Coe  taken from around half way up one side on the 1st April. 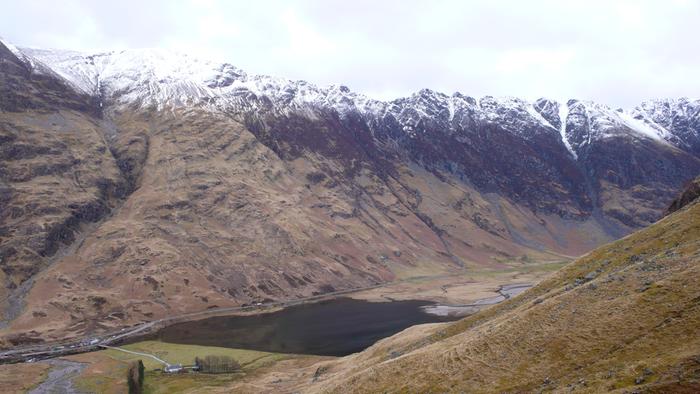 These next two are up around Tomatin in March, the tent is pitched in a long abandoned croft. we think we pitched on the old muck heap since there were no stones there. Hard to find a spot with no stones up there even for a tent that size. 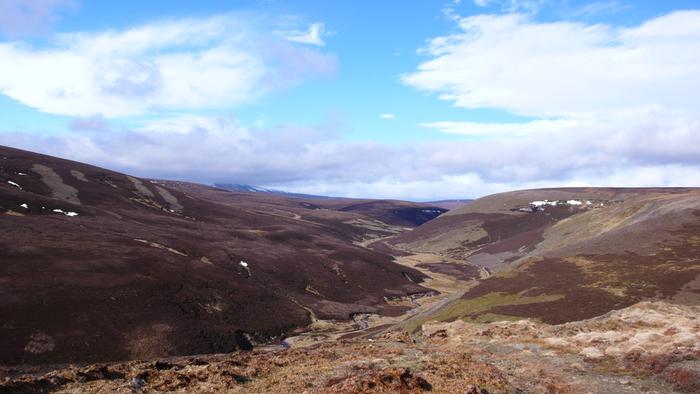 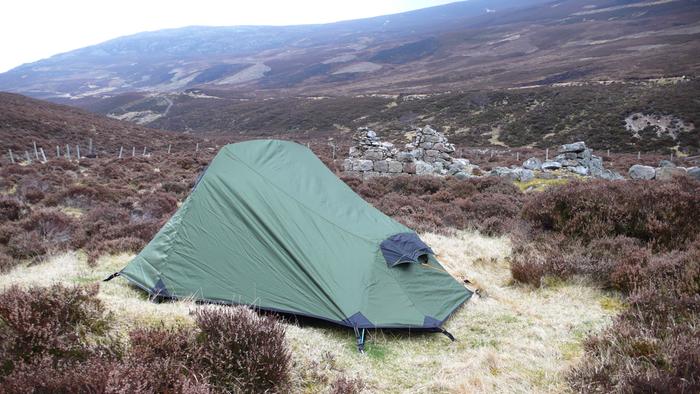 And just to show it's not all baren moors this next one is from the top of Mither Tap one of the few munroes on the East coast, The photo is looking out the main gate of a hill fort. 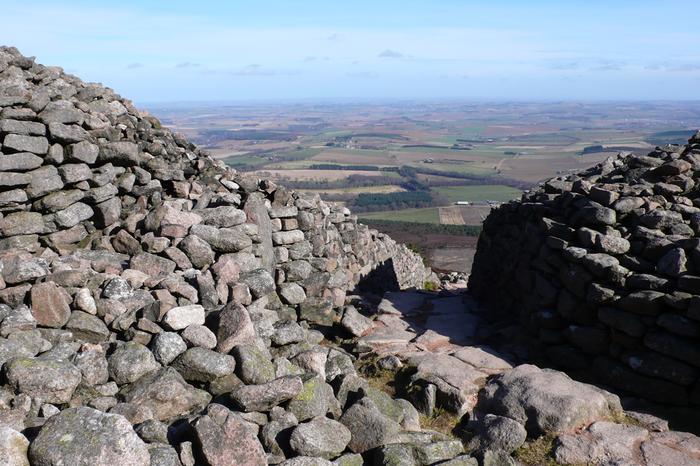 And this very last one is in the City of Aberdeen and is the Brig-O-Balgownie. which was built in 1286 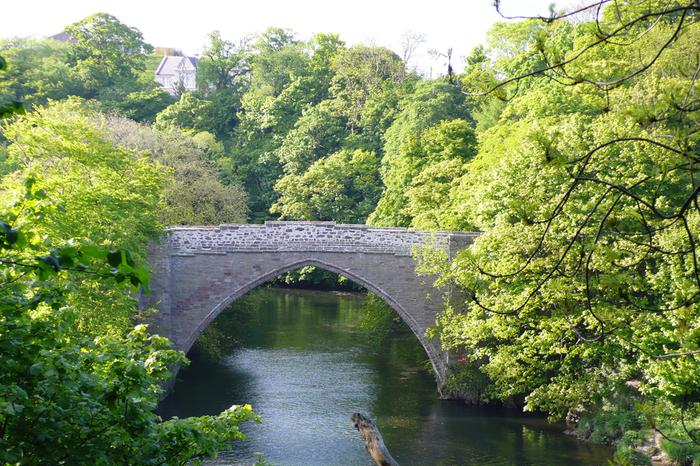 Skandi Rogers wrote:. . . the midges are something else. . . . tiny but what they lack in individual size they make up for in shear numbers. . . .

They might be barely visible to the naked eye, but their teeth are about 3in long. They come out long before August and, as a general rule of thumb, the higher or further west you go, the more of them there are. They are not nearly so prevalent on the East coast, nor the Lowlands.
Of course, what you do is get me to show you around. The d*mn mudgies will selectively chew me to pieces and leave you alone.
jason holdstock
Posts: 11
Location: Isle of Lewis, NW UK
3
posted 4 days ago
We live on the Isle of Lewis.
The weather station on the little hill behind us has run out of battery a few times this year so has only recorded 620mm of rain to date. And of course the rain has to be falling to be recorded. If the wind is taking it sideways all day long it will insist you've had a dry day.
I think I read the Scottish midge has the fastest wing beat of any animal which has something to do with why they can't do anything when it's windy. The most important part of the forecast here is wind speed and direction. Any wind above about 6mph and we'll be midge free. But wind from the west has to go over a little hill near by, so then we need maybe 15mph to keep them off down here. And they can also hide behind a building, so beware the lee of anything, they can be lurking!
A neighbour whose family has been on the same croft since Leverhulme's giveaway reckons the midges actually live in the wind. You won't see any on the plants, in the grass, they vaporise when the wind picks up. But when the wind eases they just drop out of the air and come to get you. Buzzing in your ears, up your nose, in your eyes, hundreds. No deterrent works, the oil based Avon skin so soft (original recipe only) stops them biting but not landing and going for a wander. Having a bath after being outside and exposed leaves a black slick of dead bodies. The Original Bugshirt should be supplied by the Govt to all :) I wish I was one of the few they don't bother with.
The wind and sea makes this a very mild place though, and any weather is only passing through for a short while. Fog for half a day here and there, snow last year was the first some kids had ever seen, almost no thunder.
A phone call between my young son and his Grandad recently had Grandad describing what sparrows were doing in his garden a long way south of us but he couldn't remember the word sparrow. So he was describing brown birds that regularly come to feed in his garden. Little boy says "eagles you mean?" Grandad later tried to suggest Grandson was being a bit mad suggesting eagles would come into anybody's garden so what was he talking about, but no, eagles come bunny hunting quite regularly :)
G Freden
pollinator
Posts: 543
Location: West Yorkshire, UK
136
posted 4 days ago
I'm American living in Yorkshire, married to a Londoner (or southerner as they call him up here).  I've never been to Scotland, despite expressing an interest in it on several occasions;  husband: "why, you want to get wet?"  Several members of my own American family have even been there, unlike me.  The furthest north I've been is to see Hadrian's Wall, which was a fun day trip--despite getting wet.

Think of the poor Roman soldiers who came from Italy to the Northumberland weather.

Actually, many of the soldiers were probably recruited locally, so they would be inured to the damp.
Lif Strand
Posts: 100
Location: New Mexico USA zone 6
21
posted 3 days ago

I've heard about those midgies!  Thanks for the reminder.  And thank you so much for posting the photos -- now I really REALLY want to go!

posted 1 day ago
I long to visit Scotland because I have family roots there on my Father's side. Also hubby and I have been playing some Celtic music. There is so much emphasis on Ireland and not much is shared about Scottish music, food,culture which has made me curious.
Also what time of year would those of you who live there believe would be best for visiting? I had never heard of the midges you describe.
Lif Strand
Posts: 100
Location: New Mexico USA zone 6
21
posted 1 day ago

Candace Williams wrote:I long to visit Scotland because I have family roots there on my Father's side. Also hubby and I have been playing some Celtic music. There is so much emphasis on Ireland and not much is shared about Scottish music, food,culture which has made me curious.
Also what time of year would those of you who live there believe would be best for visiting? I had never heard of the midges you describe.

I've come across some great Scottish folk/rock music.  I love it!  I find it in a newsletter I get called Music Scotland, which introduces new music across genres, just as long as the band is Scottish.  Check out musicscotland.com to subscribe.


I've come across some great Scottish folk/rock music.  I love it!  I find it in a newsletter I get called Music Scotland, which introduces new music across genres, just as long as the band is Scottish.  Check out musicscotland.com to subscribe. 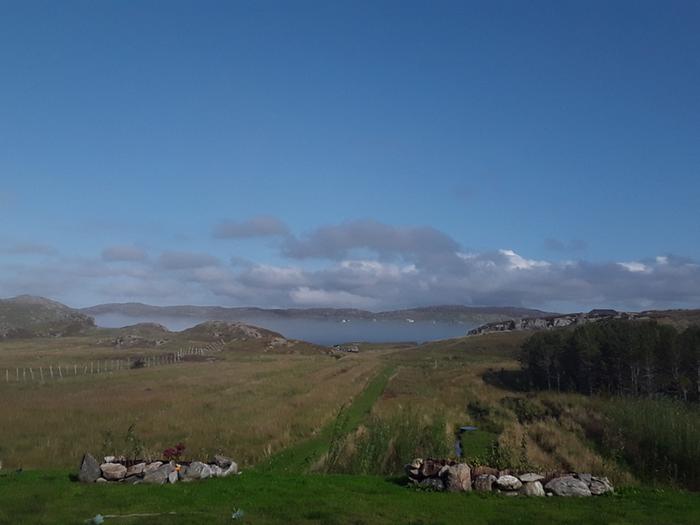