Laura See
Posts: 2
1
posted 3 months ago
I'm brainstorming the idea of an earth-sheltered greenhouse that also houses chickens in the winter (with deep bedding). Do you think this is a good idea and would it really be beneficial?

Thoughts and questions in my head so far...

- Is it really worth it to combine the two? The chickens could contribute carbon dioxide to the plants and the plants could give back oxygen. The warmer greenhouse temps could be nice for the chickens, but they don't necessarily need that. After all, it's the daylight length that determines their laying, not the temperature, right?

- How could I design it so the chicken-coop part is above ground (to make it easier to haul out soiled bedding and easier for chickens to have access to the outdoors) and the greenhouse partially underground? The north-side would be mostly dirt so that would insulate the chickens better.

- I thought about having the chickens run around below the plants but knowing chickens, they would want to perch on them I'm sure! Also, I'm not keen on all the dust they cause being over all my plants. The greenhouse would mostly be for starting plants up over winter. I suppose I might also try keeping some plants there year-round if I could figure out how to do that without too much trouble.

- About earth-sheltered greenhouses... do you get the same thermal benefits from scooping up large amounts of dirt around a ground-level structure as you do from digging below ground?
Leigh Martin
pioneer
Posts: 68
Location: Pretoria, South Africa
43
I like...

posted 3 months ago
I failed at this one cause my chickens ate all my plants. At the time I was collecting quite a lot of rare plants, most of them were never recovered.

Have you considered piling up the deep litter into a pile/ wire frame directly in the greenhouse and using the compost heap to warm your greenhouse in winter?

I’ve also seen some of Charles Dowding’s videos where he uses the heat from compost to start early germination on things like capsicum. That might be an idea.

I’m not familiar with cold weather or sunken greenhouses, so no comment there.

posted 3 months ago
Warmer, or more comfortable chickens could save on your food conversion. You would need to feed less as they won’t need to expend as much energy to keep warm. Guess this will also depend on breed suitability for your climatic conditions.

Learned that rearing meat chickens in the middle of winter under no heat. Was not a great idea, also probably the most expensive chicken meat ever.

posted 3 months ago
I think the chickens will get into your plants, unless you fence them out, even if you elevate the plants.

Any fencing/protection should have smaller holes, my chickens were able to destroy a plant protected by a milk crate.

Deep litter needn't be dusty, but a layer of plastic between the chickens and the plants could help.

The easy removal of litter/ compost could be facilitated by a long gently sloped ramp down into the greenhouse,  or by building above ground and berming the building.

My own greenhouse will host my birds during the day, but due to its location in my yard, they are not allowed to live there.
I will use plastic "hardware cloth " and heavy duty shower curtains to keep them out of the plants.

posted 3 months ago
I think the chickens will get into your plants, unless you fence them out, even if you elevate the plants.

My own greenhouse will host my birds during the day, but due to its location in my yard, they are not allowed to live there.

Any fencing/protection should have smaller holes, my chooks were able to destroy a plant protected by a milk crate.
Deep litter needn't be dusty, but a layer of plastic between the chickens and the plants could help.
I would use plastic "hardware cloth " and heavy duty shower curtains to keep them out of the plants

The easy removal of litter/ compost could be facilitated by a long gently sloped ramp down into the greenhouse,  or by building above ground and berming the building.

A really big pit greenhouse with its own pond could be a giant terrarium of sorts.

posted 3 months ago
I don't claim to have all your answers, but I do offer this consideration: moisture. Chickens do not do well with excess moisture in the cold. And there will be freezing nights when you have plenty of moisture and not enough heat which could lead to respiratory and/or frostbite issues. So that's my vote against the coop and greenhouse being too coupled together. But if you had a situation where the chickens could easily access the greenhouse at will during the day, I'm sure they would enjoy that.

posted 3 months ago
Here's a concept sketch I drew to assist in your brainstorming session.

"Be excellent to each other"

Jennifer Collins
Posts: 3
Location: Santa Cruz, California
posted 3 months ago
FWIW, I have my chickens and rabbits overwintered in the hoop house/greenhouse/nursery -- 3 months out of the year. It has worked great & I'd def do it again with small tweaks.

(Caveat: I would also have done more design work upfront to deal with heating & cooling but I can't go back and change that now.)

It's necessary for me to keep the heat up for plant starts (using barrels of water for thermal mass).

I've not had any dust problems with deep mulch (as this is a moisture rich environment).

It's so convenient to throw scraps to them from what's growing in this space.

The chicken infrastructure can be less cumbersome as it need not be predator proof, just chicken proof (light netting/cloth/hog panel) to keep them from tasty tender plants.

The chickens have a connected outside run they access when the weather is favorable. The rabbits cages go out as tractors on nicer days.

I'm in zone 9b so don't have snow or temp extremes. 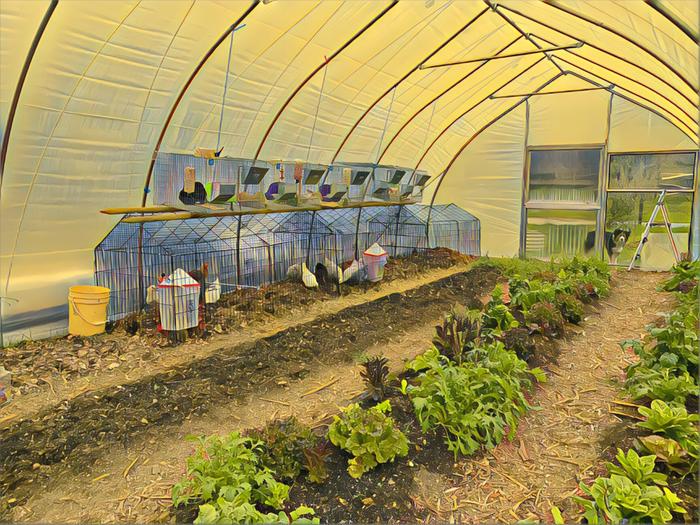 posted 3 weeks ago
I live in northern lower Michigan and have been pondering also a winter plant,rabbit, chicken and maybe pig place. I imagine a way that the hens are adjacent to the plants but not in with them. The nest boxes might be the connecting point. Rabbits would be in with the chickens as I did this past winter with a few as a test. Pigs would be another questionable part of the puzzle. It would depend on their ages and number. Also the plants I'm thinking of would be cold hardy so they would need less help to survive but could add to the health of people and animals. This past winter I kept my laying flock in front, on the north side of our house in a movable coop with an electric netting fence around them. When spring arrived and the fence posts were movable again it was so nice to move the hens west, spread some straw on the spot where they were parked over leaves and mot need to shovel manure!!! Now , a month later flowers are blooming happily where the birds were. I did put a tarp over the chickshaw and a couple of bales of straw on the east side to shelter hens and three ducks who lived beneath the coop.