posted 1 week ago
Hi Permies! This is my first post. Hope the photos work and it lands in the right spot.

I have an old house located in the maritime Pacific Northwest. The house is in bad shape in lots of ways, and was sold as a “tear down.” However, my goal is to restore it in the least expensive, most simple, and natural way possible.

The house has a fireplace and a nice brick chimney. I’m interested in converting it into a rocket mass heater. The chimney originally had one side that was on the outside of the oldest part of the house (built in 1910), but a small addition was added to the front of the house and now no sides of the chimney are outside the house, except for the part that extends above the roof. 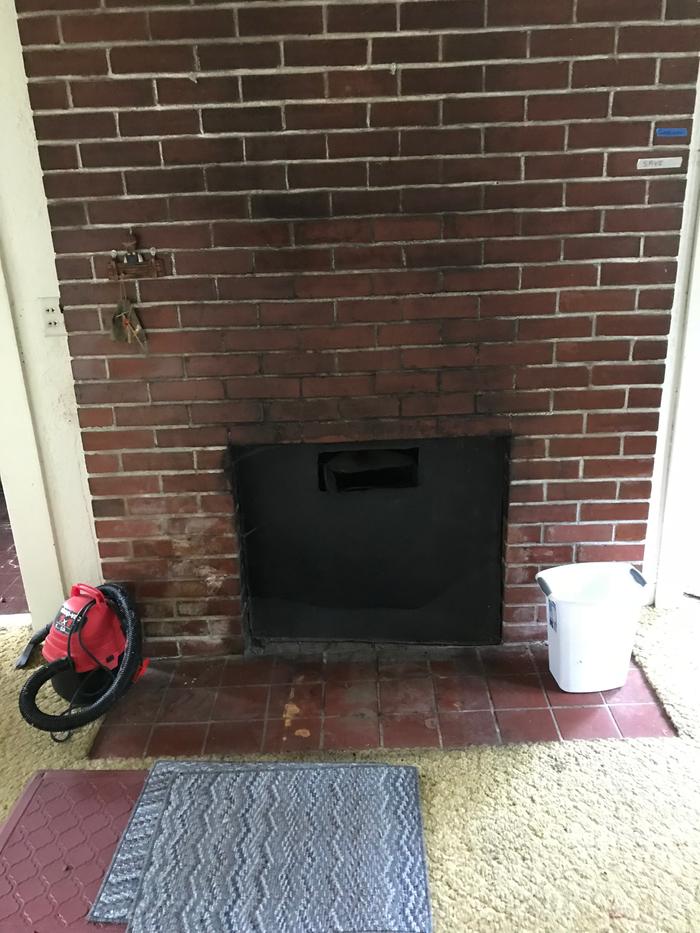 There is a concrete basement below the oldest part of the house. It needs a ton of work, including reinforcing the wall that supports the chimney.

For weight, room layout and space constraint reasons, adding a barrel in front and a bench for mass seems problematic. How can I use the existing brick chimney as the mass instead? 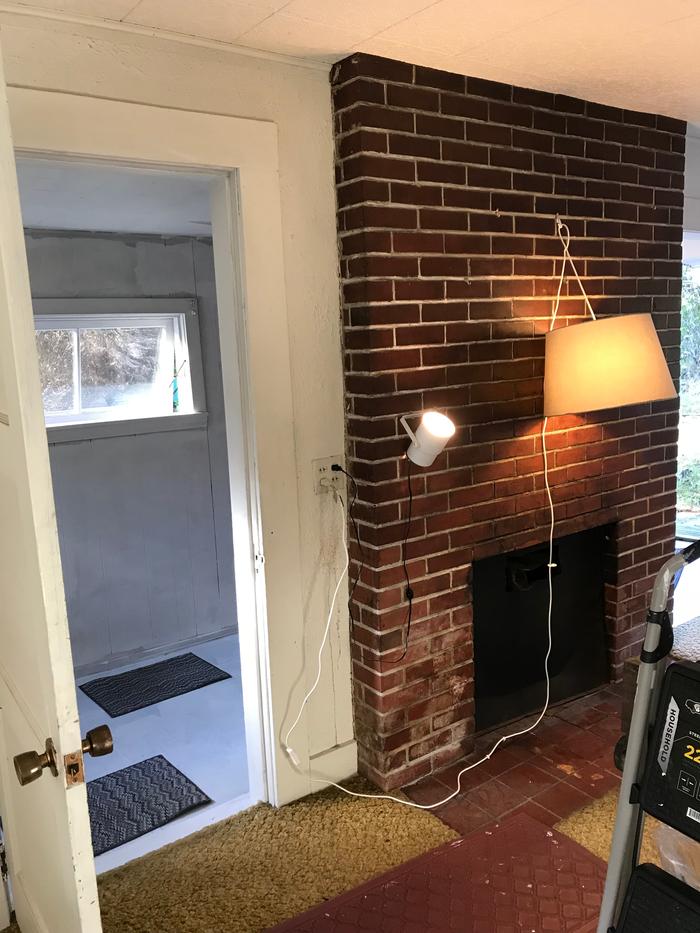 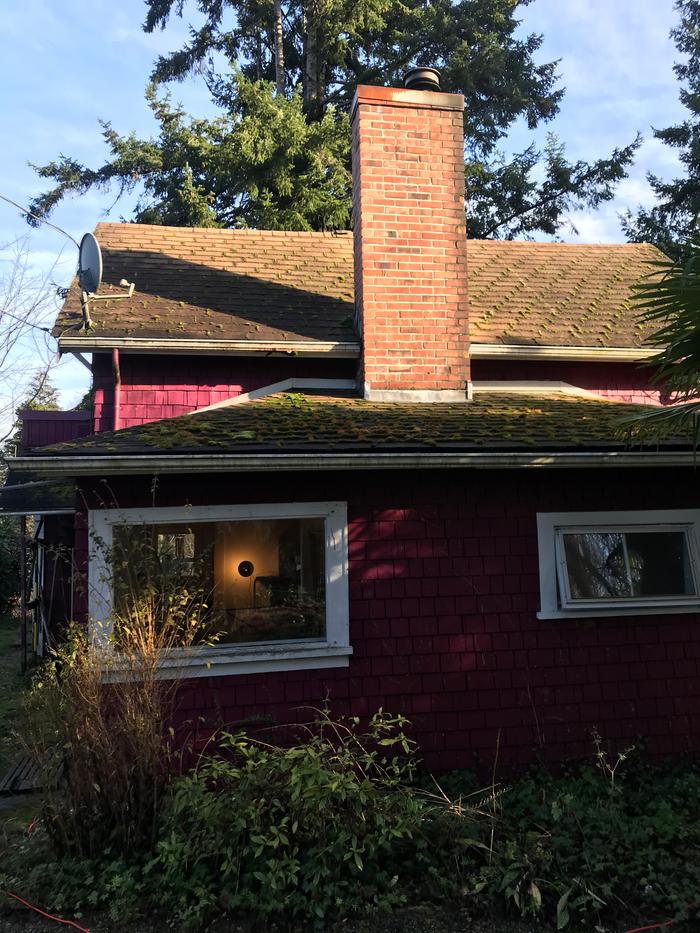 posted 1 week ago
From what I've read about from other people doing what you want to do that the main issue they run into getting a permit. Most counties simply don't like the sound of you using a "Rocket" to heat your house.

Personally, I have yet to get around to converting my chimney here in Washington so I don't yet know what the process is like in our neck of the woods.

posted 1 week ago
I’m concerned about the permitting (and insurance) challenges as well. I notice the RMH rename thread and certainly one reason could be to not scare the code folks. Perhaps for my purposes it remains a “fireplace”.
Courtney May
Posts: 5
Location: 4C
I like...

posted 1 week ago
Thinking about my question in another way: What is the most efficient use of the mass of the existing brick fireplace and chimney? Should it be used to capture and store heat?

Or, will the brick chimney above the roof just transfer out the heat from the brick fireplace that it is connected to? The bottom of the chimney is mostly sitting on the ground, same question about heat transfer.

Thomas Tipton
Posts: 129
10
posted 1 week ago
Provided you have adequate support underneath.  You could just build a couple feet out from your existing fireplace and construct a masonry heater that would channel the flue gasses upwards in a serpentine pattern and then back down the sides and back into your existing fireplace to exit up the flue.  Anything you do is going to eat into your floor space, so I'm thinking it would be best to build upwards.  Sorry I cannot provide pictures right now.  There is another thread in the "Energy" category that has the perfect thing for you but now I can't find it.  It was the Minnesota "Russian" stove, or the Wisconsin "Russian" stove.  Somebody help me out here.  Thanks.

P.S.  You're not building "Rocket" anything in your home.  You are building a "Masonry Heater".  A tried and true, time honored tradition of wood burning technology.  Maybe you're going to slip a Peter Berg core in there.  Well, no one needs to know about that but you.  Is your fireplace sitting on the foundation?  Structural support will be a major consideration in any "Mass" retrofit.

Ha!  Found it.  Look at this and see if your imagination is seeing what I'm seeing.

Missouri "Russian" Heater
Graham Chiu
pollinator
Posts: 621
Location: Wellington, New Zealand
14
posted 1 week ago
If you wanted to use your existing fireplace as the stratification chamber for a rocket mass heater then my recollection is that it needs to be double skinned.

Why not deconstruct the whole thing and use the bricks to build it again?
Satamax Antone
gardener

Posts: 3366
Location: Southern alps, on the French side of the french /italian border 5000ft elevation
170
posted 1 week ago
Courtney May, first of all, i would build a "mass heater"  Not a rocket mass heater. But it will have a rocket heart.  For permitting and all, just mass heater. Thought, you will have to check what are the regulations etc.

I skipped that myself.

Step one, extend your hearth.  I would try to find a metal tank. Not a barrel. 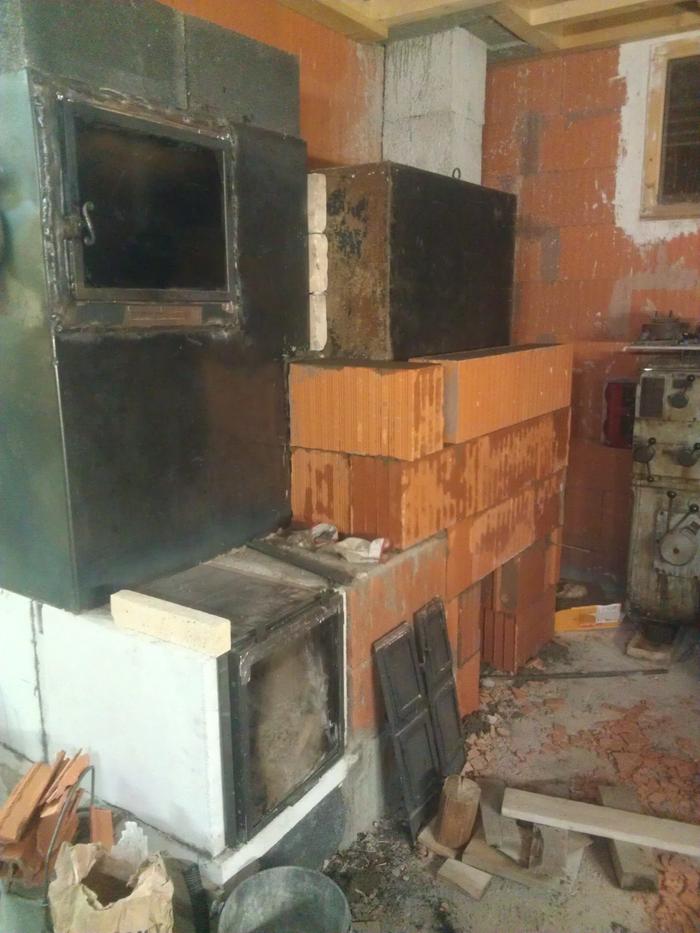 Fit a batch type rocket in there. Make a window  with an old insert door, for the oven.  And ease of building the thing.  Then brick the whole outside.

Use the actual fireplace brick wall as a back wall for the mass heater.

The techniques used can be adapted to your project. The only thing i would do different on mine now. Use a five minute riser, instead of the  ceramic flue liners.  And put the top door away from the heat riser, not in front. That allows to make a black oven behind that door

posted 1 week ago
Thanks for the replies all! I do look forward to “building an addition to my existing fireplace to make it a more efficient masonry heater.”  I have read articles and permie posts about masonry heaters. Thanks Thomas for the link the manual for the Missouri design. And thanks Satamax for the many photos documenting your build.

Next I’ll take out the piece of metal that is in front of the fireplace and check out the chimney. I have wondered if there was enough room in the fireplace / chimney to circulate the heated gas. But maybe not. Adding structural support underneath the fireplace is something i need to tackle anyway, so I can address any additional weight requirements.

I have much to learn, especially terminology. Ernie and Erica’s book is on the way! I may first experiment with retrofitting an existing outdoor brick oven/bbq, then tackle the fireplace inside.
Satamax Antone
gardener

Posts: 3366
Location: Southern alps, on the French side of the french /italian border 5000ft elevation
170
posted 1 week ago

Courtney May wrote:I have wondered if there was enough room in the fireplace / chimney to circulate the heated gas. But maybe not.

posted 1 week ago
Hi Courtney;
As your having terminology issues I'll  enlarge on Max's response.

I.S.A.     Internal surface area.     That is the walls and roof of the bell. Measured to come up with how much area you have to heat.
The floor does not count.  If insulated (ceramic board) then the roof does not count either.

Posts: 3366
Location: Southern alps, on the French side of the french /italian border 5000ft elevation
170
posted 1 week ago

I.S.A.     Internal surface area.     That is the walls and roof Of the bell measured to come up with how much area you have to heat.
The floor does not count.  If insulated (ceramic board) then the roof does not count either.

I had to clarify!