posted 9 months ago
So I just stumbled across this yesterday.
It appears to be part of a brooder system which can be used outside and which requires no electricity to use it. It apparently uses the heat from the chicks to warm themselves up. I am not really sure of all of the specifics of how it works.

I am seeing claims of it being used at 30-40*F outside. It seems some people will use a heated water bottle for the first few nights. I am also seeing people not using any supplemental heat at all.

Apparently the box has strips of wool blanket hanging down and the chicks can snuggle up to the strips.

Here is an article which showcases how they are used.
https://www.backyardchickens.com/threads/wool-hen-or-how-to-raise-chicks-with-no-heat-lamp-and-possibly-no-supplemental-heat-at-all.1126460/

Here is a link to what one can look like on the inside
https://www.backyardchickens.com/threads/any-suggestions-for-my-wool-hen-project.1445045/post-24046158 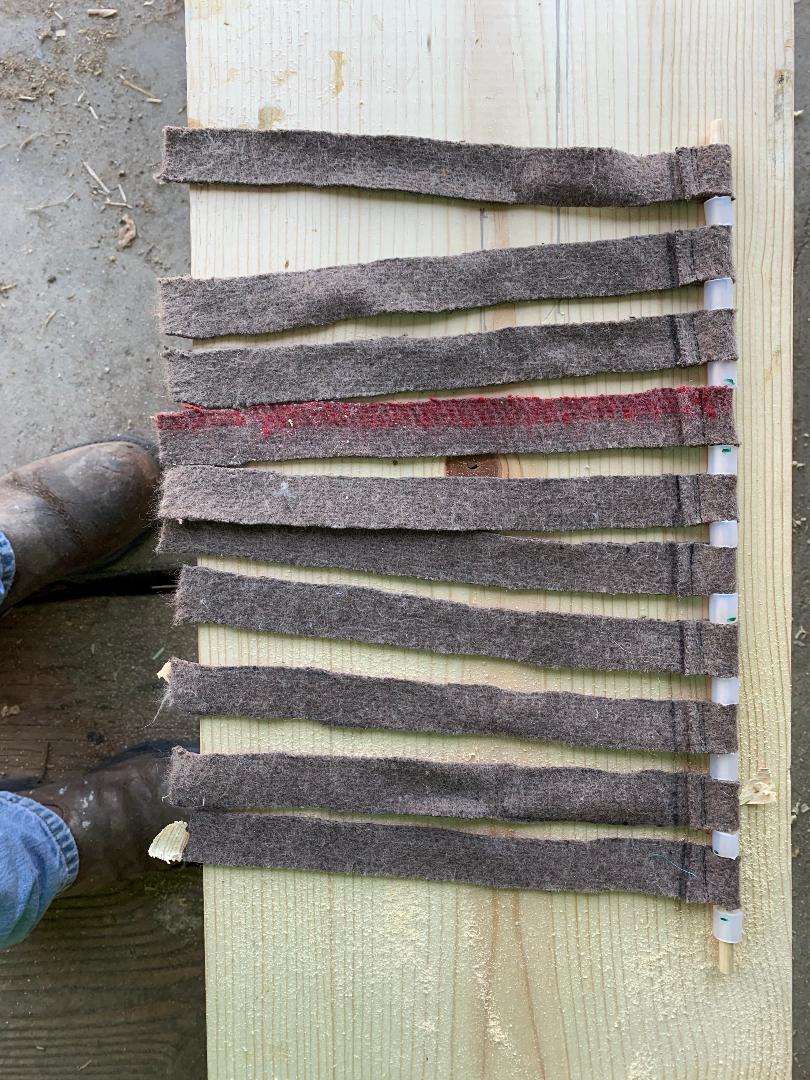 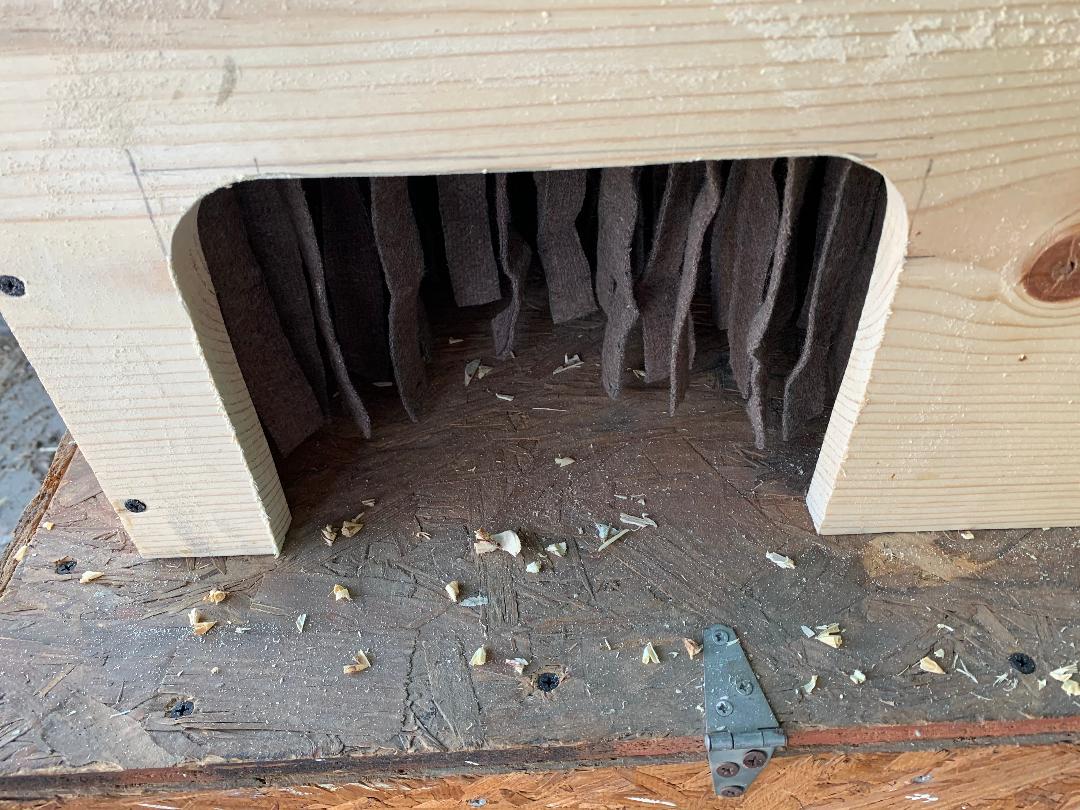 
I am going to attempt this with 6 - day old turkey chicks. I will try it in june when we get the turkeys

posted 9 months ago
What an interesting idea! Seems like it would be much more comforting to the chicks than other styles of brooder, leading to healthier birds. I used a plate brooder for mine and some of them still seem to be affected by the lack of something warm and soft to snuggle under as babies. They always wanted to hide under my partner's beard and in my hair as babies and obsessively try to burrow under the other hens now as adults. I wonder if something like this would help reduce that stress.

I also wonder if this could be adapted for adult birds in case of extreme cold snaps.

posted 9 months ago
This reminds me of the following video. I thought it was clever. I would certainly enjoy hearing how the idea works out for your turkey chicks.

posted 9 months ago
Oh this is amazing. I tried to raise chicks a few years back only w a warm water bottle and a hay box, but they practically stamped each other to death... and I have been reluctant to try again. This might actually do the trick!

posted 9 months ago
I use hot water bottles when and keep them in near my swoodstove in a tote with straw. It seems to work very well for me, Ill look into the video in a bit as well

Live your own dream, let nothing stop you.

Richard Henry
pollinator
Posts: 92
36
posted 9 months ago
This is a wonderful concept.  I see two things that might impact viability.  One - The number of chicks will determine much of the heat needed.  I see 18 to 19 listed as numbers of chicks in at least two successful attempts.  Second - at least part of the heat in this may come from the fact that wool absorbs moisture well and retains the ability to maintain insulative qualities.  As the wool absorbs moisture it produces heat from the phase change in the moisture.  Water is one of nature's miracle substances.  It can provide more heat storage than an equal mass of rock and will provide massive potential heat from phase change.  For example, one cubic centimeter of water at 0 degrees C will have to give up 80 calories of heat to move from liquid to solid (ice).  Less energy is involved in phase change from gaseous to particulate water as it is absorbed in wool, but it is significant.

Quote from https://weatherwool.com/pages/the-science-of-wool/ which provides a more detailed description:

" Once inside a wool fiber, water vapor will condense, releasing about 533 calories per gram. [I wonder if the temp of the fabric or the external temperature affects the rate at which water is vaporized and released from within the fibers?]

A kilogram of dry wool placed in an atmosphere of air saturated with moisture releases about the same amount of heat as that given off by an electric blanket running for eight hours."

I see no reason why one could not use wool yarn or recycled wool clothing or sweaters for this wool hen.  That would lower costs, potentially significantly.  It would matter not to a chick if the fabric had been chewed by moths.  The higher the percentage of wool, the better.  Highly appreciate the thoughts.  Very useful.

Shae Cunningham
Posts: 1
posted 9 months ago
Could you also use sheep fleece directly? Allow the chicks to nestle into it?
Richard Henry
pollinator
Posts: 92
36
posted 9 months ago
I would be careful about using unworked wool.  There is a good site for chicken raising called Backyard Chickens and there several mentions related to wool hens identify that minimum width of strips should be around 1.5 inches since chicks can get caught in smaller threads.  That would follow what I have observed raising several broods.  Chicks need significant training to stay out of trouble.  With a resident hen, they get that.  Without a teacher/mother we need to take over that responsibility.  There are often local sites that carry rags and damaged used wool fabric from multiple sources.  I would think that a pure wool sweater even with moth holes would be perfect due to loft and lightness.  The fact any moth eaten fabric is probably high percentage wool is even better.  Repurposing clothing is fabulous and recycling damaged fabric is even better for the planet.  Spinning excess wool into yarn and darning strips if you wish is a good way to relax during bad weather while keeping the brain active while counting the threads.  A small portable weaving rig would produce high quality fabric for regular use and once that is worn, moving it to manufacture of wool hens is a natural progression.  Ensure the ends of the strips are above the floor of the box to prevent trips and catching of fabric in small claws.  Again, wool fabric would seem easier to control for length than straight yarn or wool straight from the shearing.

I would think that mixing the wool strips with real feather dusters would allow chicks to control their heat more effectively and keep them calmer.  The wool hens provide concentrated heat and the feather dusters allow more natural surroundings as well as some lower temperatures if outside weather bounces.  With recent weather patterns running from record heat to record cold and snow, that sounds like a very good plan.

Could you also use sheep fleece directly? Allow the chicks to nestle into it?

The lanolin in raw fleece would concern me. Maybe it'd be okay for ducklings and goslings, but even there I might still hesitate. Wool roving might be better.

I think a key feature to the wool hen brooder box is having the insulation hanging above the chicks. I wonder if the chicks would have a hard time moving around in the wool fleece if it was on the ground... but maybe there are ways to make the idea work.
Sister Maria Philomena
Posts: 3
posted 8 months ago
I've never used a heat lamp. When I don't have a broody hen to adopt chicks, I use an artificial hen. The latest form is a rabbit skin stretched about halfway (fur side down) in an upside down milk crate. It works well -- up to 25-30 chicks per crate.
jordan barton
steward

posted 7 months ago
Well here is what I came up with. Ended up refurbishing a cedar box that was built for another purpose. I replaced some boards and insulated the top with 1 inch EPS. I used a feed bag for containing the EPS. I attached the cardboard to the sides with staples.

As for the material for the "strips" I ended up just using what we had on hand. It is a strong fleece. I was not super happy with it but it is what we have on hand. It actually is being used a second time. First time was for the baby chicks!

The rack was laying around the yard and worked really well. I cut slots in the cloth and than fed the longer piece through. I looks and feels sturdy.

Turkeys are due june the 7th